Accessibility links
A Phony Article Epitomizes Hip-Hop's Struggling Underclass : The Record When even the biggest stars in the world are relying on extramusical gimmicks to hype new albums, what's an unknown rapper supposed to do to get noticed? Maybe fake a profile in the paper of record? 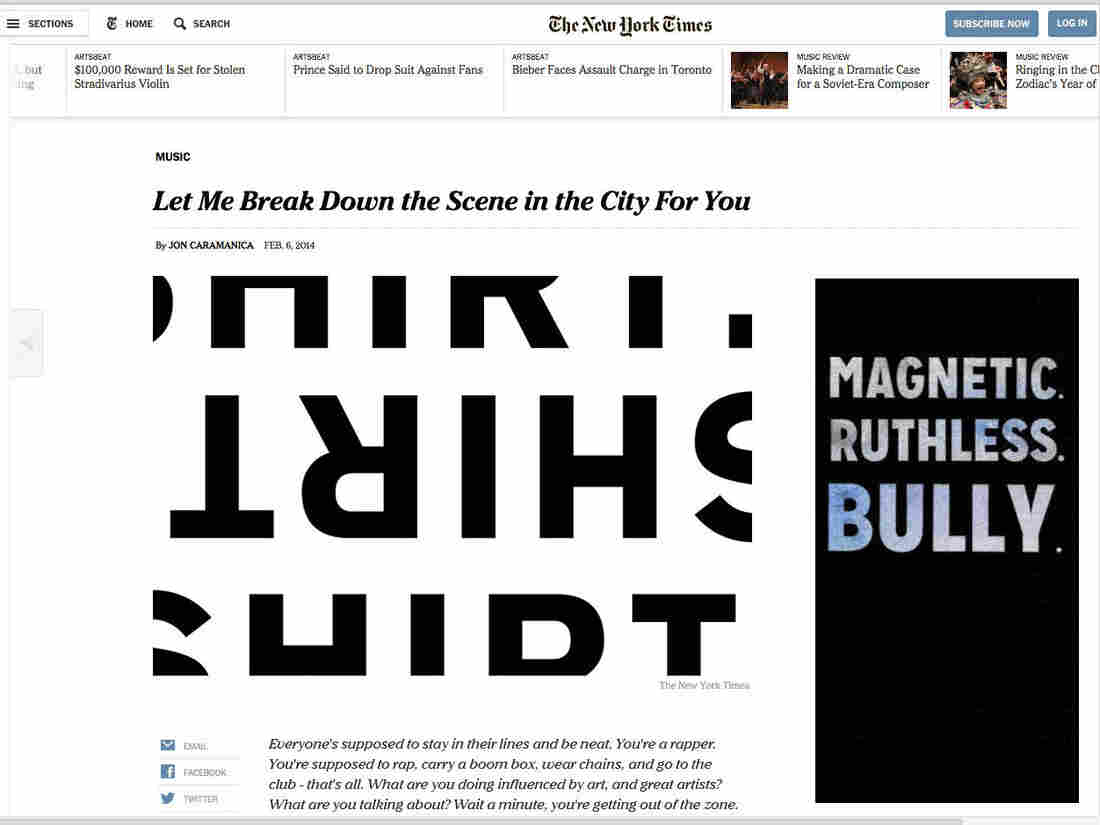 The rapper Shirt created a counterfeit article designed to look like it was written by the New York Times critic Jon Caramanica and published on the Times' website. NPR hide caption 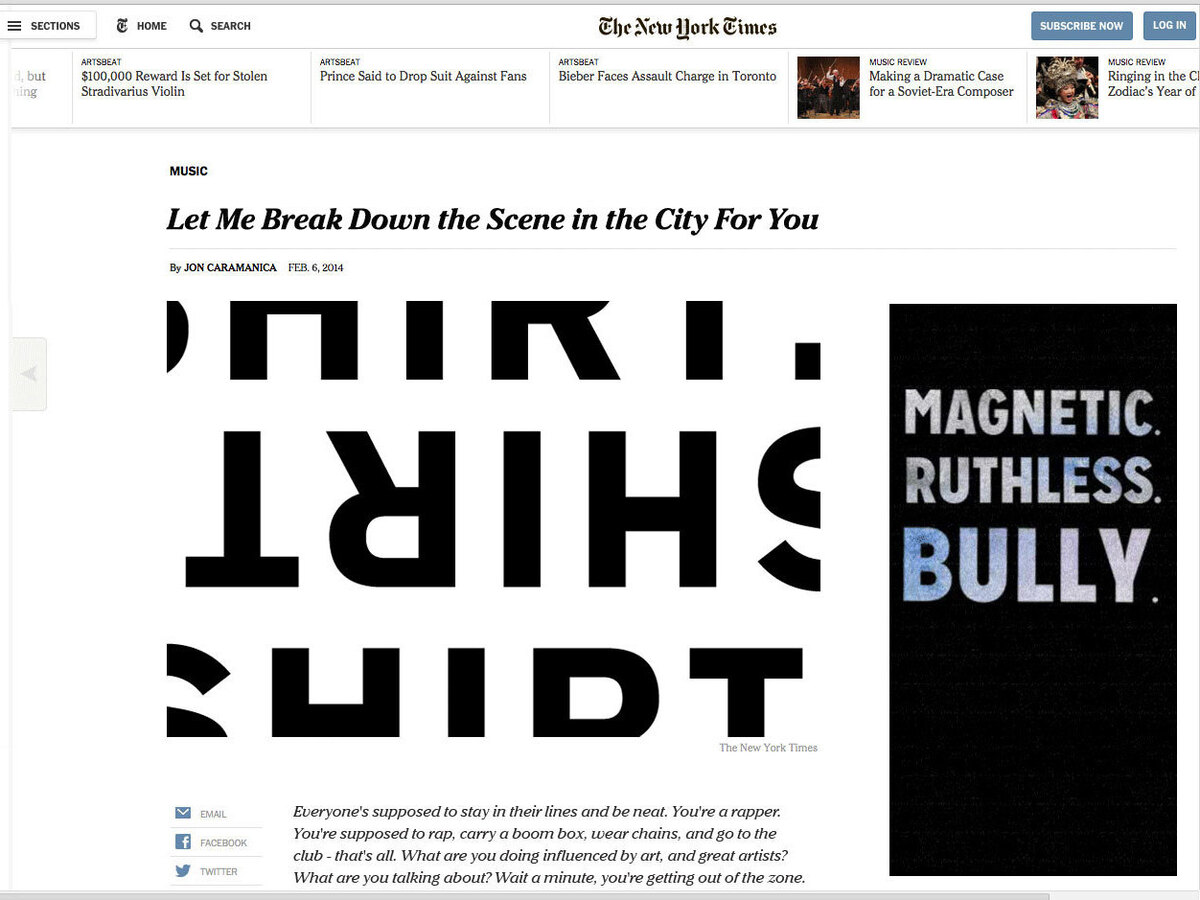 The rapper Shirt created a counterfeit article designed to look like it was written by the New York Times critic Jon Caramanica and published on the Times' website.

Music's biggest stories are being truncated into listicles, click-through slideshows and GIF-friendly collections of microthoughts. This isn't an incredibly novel observation, but recent events are showing that that collective memory of consumers may be going the way of the dodo.

Earlier this month, the largely unknown Queens, N.Y., rapper Shirt sent out a notice to his email list informing his subscribers that his "NY TIMES piece hit yesterday morning," accompanied by a link. (He also tweeted the link with no comment.) Purportedly bylined by Times critic and hip-hop go-to guy Jon Caramanica, the piece was tellable as a fake — while Shirt convincingly re-created the Times' website and cut and pasted some of Caramanica's phrases from published pieces, the prose, syntax and journalistic approach were off. One writer noted that the piece referred to an "e-mail,"whereas the Times style would be to render the word as "email," sans hyphen. (There were also navigational quirks, if you actually cared to click around.)

Everything You Know About This Band Is Wrong

As far as moves like these go, Shirt's trick was sweetly middle of the road — it wasn't the over-the-top corporate shakeover of Jay Z's Samsung deal, the narcissistic subversiveness of Kanye's "New Slaves" video projections, or the blindsiding release of Beyonce's album-length surprise party. But it wasn't the lowbrow move that most rappers of few resources make — Shirt didn't self-servingly start a uninteresting beef, eagerly jump on the catchiest instrumental of the week or remake another artist's album as a gimmick. (Though he did rap over Purity Ring's debut album in 2012.) As he tweeted, "I promise you there's a huge difference between doing 'whatever it takes' and doing some cold s- - - to get people talking."

Part publicity trick and part propaganda, the phony article has been lauded as "the ultimate viral stunt" and dismissed as "so desperate for press" — with Fusion.net noting that "Shirt scored a pretty decent hit — hello, we're talking about him now," while Complex seemed surprised that it had written about him previously. But it's all part of the noise of the cybersnake eating its own virtual tail. In the weeks since the stunt, the media and the conversation, even the insular conversation about the relationship between hip-hop artists and the media, has moved on. Not only has Drake retired (and most likely unretired) from giving interviews to the "evil press," Kanye has threatened to physically assault journalists and Rick Ross has made at least one writer question his career choice. A long-held understanding in the music industry is that press doesn't sell records or concert tickets, making it one of the most minor considerations after marketing, radio and video promotions. But the press, through the enchanting power of a good narrative, has always been able to build careers. And in these days when even records don't sell records — the traditional campaigns don't have the scope to infiltrate the multiple screens and splintered ways consumers experience music today — the publicity department, the redheaded stepchild of most record labels, is more important than it has been in decades, even as reliable news outlets wither and die.

Explaining himself in an interview with hip-hop blog NahRight, Shirt shared the motive behind his caper. "When people hear my s- - -, as far as fans and bloggers, they're like, 'This kid's nasty,' " he shared. "I did something for [Peter] Rosenberg, and it did really well. But I'm not sure what it will take to 'break through.' A lot of people say it's co-signs. That's a little sad, but I get it. If Jay Z puts a link to the Times article, and he writes #newrules, I'm outta here."

It's an accurate and concise reading of hip-hop's digital landscape. Despite the democratizing promises of Web 2.0 and the DIY-ism of social media, the reality is that the game has only changed guards, with bloggers and pre-established entities that have successfully shifted their brands to the Internet being the new gatekeepers. Aside from novelty acts and one-hit wonders, the Internet hasn't produced any rap stars that have crossed over into the mainstream proper. It's been a boon for ostensibly indie rappers like Mac Miller and allowed fringe acts like Odd Future to gain a niche foothold, while giving older rappers an extended lease on their careers — but the names atop hip-hop's marquee (Jay Z, Kanye West, Lil Wayne, Drake, Nicki Minaj, Kendrick Lamar) owe their status to co-signs, being grandfathered in or major label push.

What the Internet has significantly produced is twofold. First, it's given rise to midlevel stars like Wiz Khalifa, A$AP Rocky and Chief Keef, and a new underground of rappers like Curren$y, Migos and Azealia Banks who are bigger on computer screens, clubs and stages than on radio waves or Billboard charts. Second, and possibly more annoyingly, it's created a class of derided "struggle rappers" who flood cyberspace with untold terabytes of music, videos and unrequested solicitations to assumed power players on Twitter in an effort to be heard. Where the former group creates a strong middle class that keeps the genre from becoming too bottom heavy, the latter group mostly contributes to the overall noise level by subsidizing the "content"-hungry sites that sometimes post dozens of entries per day.

It's an incredible and almost impossible storm to break through, especially for an artist like Shirt. Previously known as T.Shirt, he's an enjoyably nimble and abrasive rapper who has been paying his dues by remaining on the borders of the various hip-hop ecosystems that funnel new artists toward fan awareness. Though he's largely straightforward as a rapper, he doesn't collaborate with outsiders much, nor is he affiliated with any rap clique; he doesn't release material in torrents and his artistic outlook feels most inspired by the downtown New York scene of the early '90s. He makes atypical videos and songs and is decidedly SEO-unfriendly — his name is Shirt, his website is illrapper.com, his latest album is simply titled Rap. Given that he's smart enough to kinda sorta fake The New York Times, one would think that he's aware that his naming choices are likely to land him no earlier than Page 20 of a Google search. It's an exact defiance of the common wisdom — today's rappers tend to go for unique names or substitute a "$"for an "S" to be more searchable.

Another aspect of the stunt is that it's an actual ruse — much more akin to those "news reports" selling weight loss supplements than an obvious promotion. Shirt even acknowledges this in the fake profile (which he wrote), quoting himself as saying, "I'll f- - -ing fake a Times article" and acknowledging his (very SEO-worthy) shirtf- - -edrihanna.com campaign, which is a nod to famed New York graffiti legend Adam Cost's "COST f- - -ed Madonna" run of the 1990s. "Like, 'Look at the s- - - I'm pulling from,' " he said to NahRight. "It's not just out of the blue. It's not just to get attention. Yeah, I know the name of the game is to get people to look at your s- - -. But I'm doing things for a few different reasons. It's cool to me. The s- - - that people do to promote albums is all over the place anyway. It ranges from the most crazy, f- - -ed up s- - -, to the most boring s- - -. So this is my entry point. Like, 'Let's really do some new s- - -.' "

This desire to do new s- - - rings true because in the material he's released in the past four years — the albums, the singles, the videos — Shirt has never come off as starving for attention. He's often smiling, seldom pensive and never portrayed (directly or indirectly) as desperate. He's never quite laid out his endgame — putting one of his better albums on sale for $3 and making the rest available free; his music is without agenda. Does he want to become a major star? Does he want to be the next King of New York? Who knows. On "Never LOL" he rapped: "I don't need rap, boy — I coulda did photography / I don't need rap, man — f- - - it, it's a mockery / It's probably harder to make it in rap than hit the lottery / But I'll be God-damned if I let it slip by me." It's as if he wants it and doesn't want it at the same time.

While his stated goals are art and promotion (which, again, is in opposition to his Google-resistant titling), Shirt (perhaps unwittingly) has made telling commentary about the hip-hop journalism playing field. In the wake of his stunt, he's generated more thoughtful digital ink than he has in four years of putting out actual product. It underscores his notion that the proper endorsement means more than the quality of music in becoming part of the public discussion, with the corollary being that deftly faking the proper endorsement can mean more than the endorsement itself — the press and attention Shirt garnered may actually have proved more valuable than an actual profile on the front page of the Times' website. In his role at the Times, Jon Caramanica doesn't and hasn't broken any artists; and the argument that any specific piece of journalism correlates to a marketplace bump is full of holes.

For one, these days, more than ever, the tail is wagging the dog. Most music blogs exist as echo chambers and de facto public relations platforms, while accredited journalists tend to churn out stories reflecting the trending topics on search engines and social networks. Shirt escaped the circular fray and elevated himself above dozens of rappers of equal skill, accessibility and resources in the battle to be chosen by a rap writer just by making his story hookier than those of his peers — no one wants to write about a boring person. In one move, he made himself both interesting and of the moment.

The idea that gimmicks may not sell records but they will get people talking is nothing new. This time, though, because of our abbreviated attention spans and compressed hype cycles, Shirt's big splash came and went. Likewise, the Drake Rolling Stone kerfuffle was a hot topic for a day or two, before everyone went back to tearing through House of Cards like there was a prize at the bottom. Hip-hop has long led the way for music industry innovation — much like porn has for distribution and assimilation of technology. If the biggest stories (even the fake ones) now have a life span shorter than that of houseflies, the human psyche may never be the same. Shirt's prank was a teachable moment about the nature of music journalism in this day and time. But it peaked and quickly disappeared with no real lessons learned.