Accessibility links
The Hits Of Yesterday And Today : The Record Many of today's biggest radio hits came out months — even years — ago. That extended lifespan can change your relationship with a song, but it's not always a matter of overexposure. 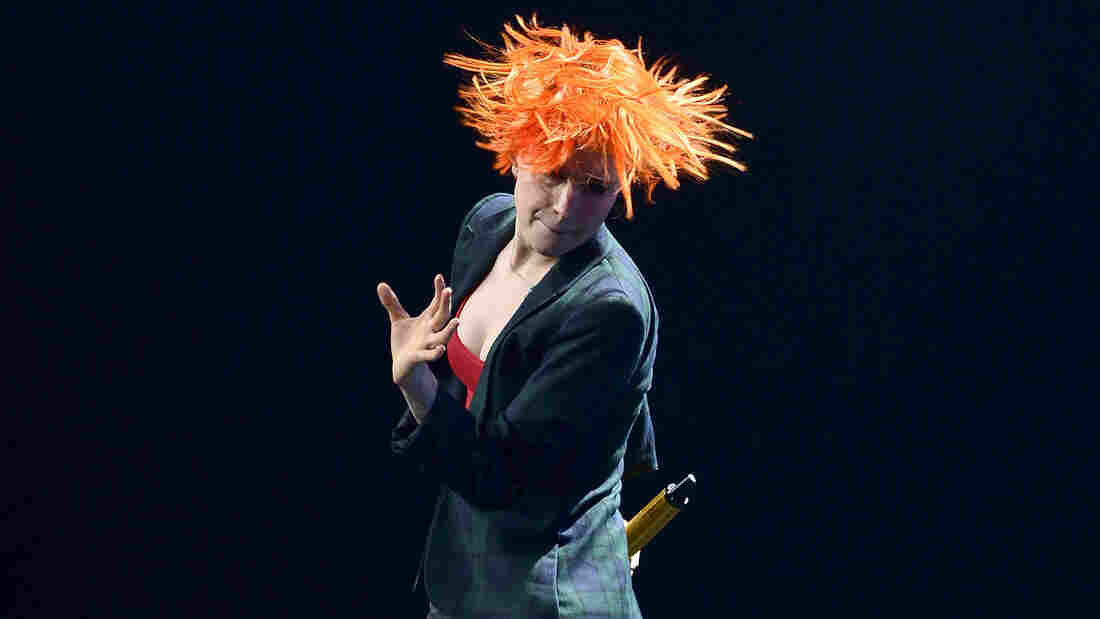 Paramore's "Ain't It Fun" was originally released on Paramore in April 2013, but the single hit radio in February and hasn't left since. Mike Coppola/Getty Images hide caption 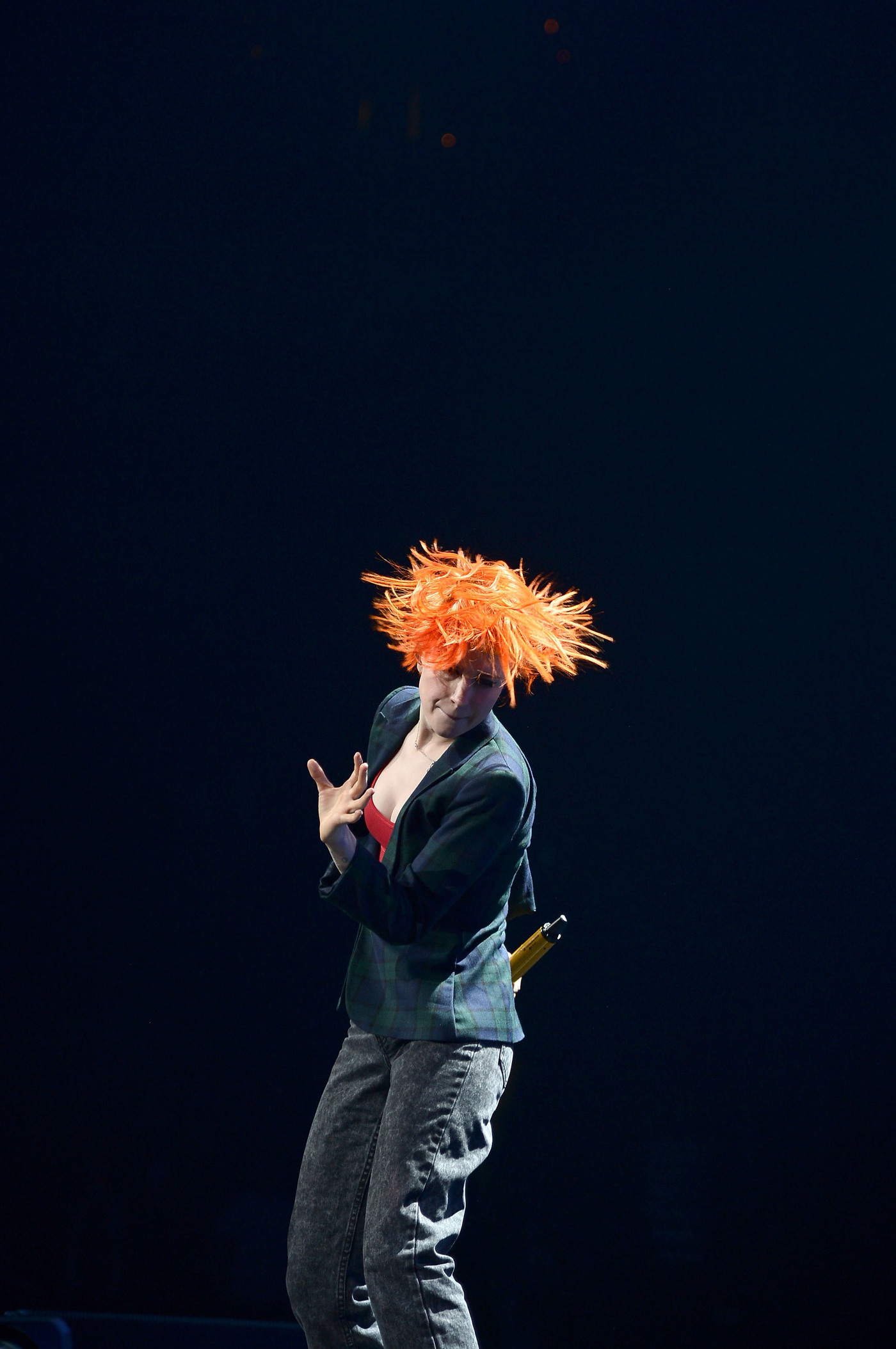 Paramore's "Ain't It Fun" was originally released on Paramore in April 2013, but the single hit radio in February and hasn't left since.

When the members of the NPR Music team gathered to nominate songs for our mid-year favorites list, we discovered something: Half of our favorite pop songs in the summer of 2014 were actually released in 2013. This wasn't a huge surprise. As Chris Molanphy explained in a column published at just this time last year, the Top of the Pops has many access routes, including more than one long way. YouTube, satellite radio, and music-driven television are just a few forces responsible for making a song you wish radio stations would play more often into a song so ubiquitous, you never want to hear it again.

The persistence of simmering hits does challenge anyone trying to define a particular pop year. 2014 belongs to Pharrell's "Happy," right? Yet fans of the Minions from Despicable Me have been dancing to it since last June. Then there's "Partition" by Beyoncé, a song that did make our list. Queen Bey's fans will recall that moment in December when the song announced itself as a stand-out track on her suddenly released fifth album, giving us a glimpse of the utter dominance she would wield the following late winter and spring, after it was released as a single in February.

Those two hits were cultural events; most songs that hang around have an impact that's more diffuse, and sometimes more personal. Songs that linger in the environment for months keep mutating in listeners' ears and hearts, revealing the many ways people feel about — and through — pop. Here are a few stories of how that has worked for me this year.

Like most people who still listen to the American Top 40, I usually do so in close company; specifically, in my old Mazda Protégé, with my 10-year-old in the back seat. Sometime in February, we began hearing John Legend's "All of Me" in regular rotation our local branch of Z100. (Molanphy has explained how Legend's Grammy Awards performance gave the song, first on the charts last fall, renewed traction.) I loved its old-school romanticism and the break it gave me from Katy Perry bombardments. Bebe despised it — especially because, not able to help myself, I'd tend to harmonize along with the open-throated Legend.

Then, around April, when "All of Me" finally hit the upper reaches of the Top 10, something shifted. I guess I kept my mouth shut one time while driving Bebe to school. That gave her room to try singing along herself, and she soon discovered how fun it is to bellow the word A-AA-LL at the top of your lungs. Was I truly sick of the ballad by then, or did I engage in some unhealthy mother-daughter competition, frustrated that my song — practically the only Top 40 song I felt was aimed at me, instead of my big beats-loving tween – now belonged to her? Then came the remix. My defeat assured, I was left to contemplate the eternal dictum that Top 40 music cannot belong to parents.

I had a contrasting but complementary motherly experience with "Ain't It Fun," one of the outstanding tracks on Paramore's zingy self-titled fourth album, which came out last spring. I tried to make that record a school-commute staple, hoping that Bebe would latch onto the freedom in the voice of Hayley Williams and begin to vary the steady home diet of all-male pop-metal bands she'd found on YouTube. Predictably, she was having none of it. But when the lightly funky strains of "Ain't It Fun" started pouring out of my tinny car speaker system, pushed upward by some American Idol love, Bebe started to relate to it. The song gave her a chance to snarl and spit with a punch that recalled what she got from her YouTube bands, in a way that more deliberately empowering hits by Perry or Sia did not. Here was a case of radio taking up a song and thus convincing my kid that it was good when I could not. I quietly gloated at the radio's success in instilling at least a tiny bit of grrrl power in her heart.

Sometimes loving a song is about sharing it with one person; for me as a critic, it can also be about hoping the world will embrace it. When Lorde's debut EP hit the Internet last March, I instantly favored the sweet, sad "Tennis Court" over the possibly more calculated "Royals." We all know which one made Lorde's mark. Generally excited about the precocious New Zealander's emergence, I nonetheless experienced some anxiety about my failure to prognosticate its trajectory. The rise of "Royals" and its attendant controversy obscured what I liked best about Lorde: that she is a kid figuring things out, her vulnerability inseparable from her smarts. When "Tennis Court" finally surfaced as a (less overwhelmingly huge, but still often-played) follow-up to "Royals" more than a year after I first loved it, I felt something like relief: finally the Lorde I liked was fully audible to those casual listeners who had dismissed or despised her.

Slow reigns can also create environments for shared feeling. The emergence of Sam Smith as this summer's shining new talent presents one such opportunity.

Smith has an extraordinary voice and a beguiling persona. His public declarations of inexperience and the desire to grow — "I want to be a voice for lonely people," he's famously said — has made him all the more winning, as did the classy, compassionate way he came out as gay. Appreciators of big vocal talent are roundly delighted that the gospelized ballad "Stay With Me," from his debut album, is a hit. That success is even sweeter because two other songs with Smith singing — one from last May, and the other, believe it or not, from 2012 – have recently become U.S. hits, causing Smith's arrival in America's consciousness to feel like a proper anointment.

Both songs, "La La La" and "Latch," have the added value of expanding American awareness of international dance pop. "La La La," by the producer Naughty Boy, was the biggest-selling single in England last year and snuck into the American top 20 this spring. It fully introduces the American mainstream to the mind behind a growing number of U.K. success stories, including the vocalist Emeli Sande, who is Naughty Boy's frequent collaborator. It wouldn't be right to call Naughty Boy a British Timbaland yet, but he is a major talent. Even more central to future-thinking dance music are Guy and Howard Lawrence, the brothers who comprise the duo Disclosure. "Latch," their song featuring Smith is a critic's favorite from the highly inventive debut album Settle, and is hot on the tail of "Stay With Me" on the Billboard Hot 100. (It made NPR Music's mid-year albums list at this time last year.) Smith's voice is undoubtedly a main selling point on both of these songs; their radio pervasiveness now makes his newfound fame feel not just individual, but part of a movement.

Movement, turtle-paced or running like a rabbit, is what mainstream pop is all about. It exposes the listening public's shared whims and building loyalties. Lately, that movement has turned international. A cluster of slow-simmering hits has overtaken us in mid-year that may say something about pop's immediate future. Each, like Sam Smith's music, first made an impression overseas. For me, these songs represent a small hopeful moment — one in which the Top 40 helps make everyone's ears more varied and cosmopolitan.

These songs include one that almost made our list and a few whose appeal is less strictly aesthetic than pop-utopian. "Am I Wrong," by the Norwegian duo Nico & Vinz, is the one the NPR Music pop team considered; with its African guitar lines and rhythms matched with a delicious Scandinavian melody, it's grounded in a global vision that recalls Peter Gabriel's 1980s work. It topped charts throughout Northern Europe before emigrating here. There's also "Come With Me Now," the extravagantly theatrical song by the South African band Kongos (first released in 2011!), the irresistible/unavoidable "Rude" by the Canadian band Magic — which ruled the charts in Australia and New Zealand before wending its way here, and, for better or worse (Grantland's Steven Hyden definitely thinks worse), reasserts reggae as a major, pop-ified presence on our radios.

Nasri Atweh, the hilariously self-assured singer and mastermind behind Magic!, is not a Top 40 outsider. He's co-written songs recorded by Justin Bieber and Chris Brown. And he lives in Los Angeles. His certainty about the world domination potential of Magic!, reflected in interviews like this one, reminds me of the roguish arrogance of that other pop-reggae purveyor, Maroon 5's Adam Levine. Yet although I sort of hate "Rude" for its twelve-kinds-of-rum-in-one-drink vibe and its throwback lyric about a Dad-approved marriage proposal, I am also encouraged by what its mellow journey toward the charts' peak portends. Next June, perhaps, a whole host of other far-flung successes will have simmered into American listeners' ears, expanding pop's worldview for a good, long time.