Accessibility links
Chronixx: 'I'm Not A Perfectionist With Music' : The Record The roots reggae singer has played to thousands and appeared on Jimmy Fallon, but he says he is only willing to go a certain distance to please the mainstream. 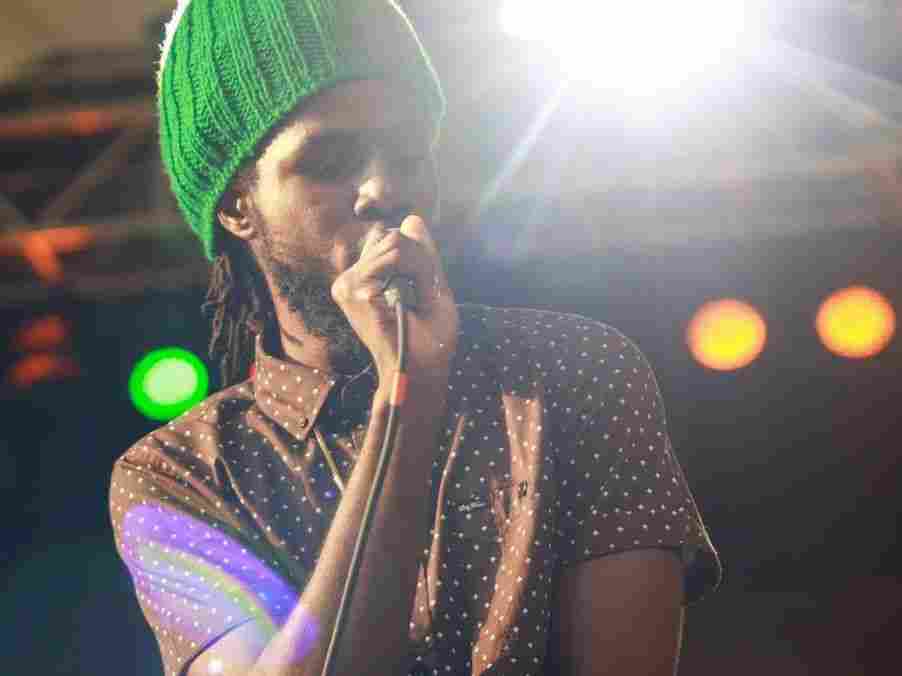 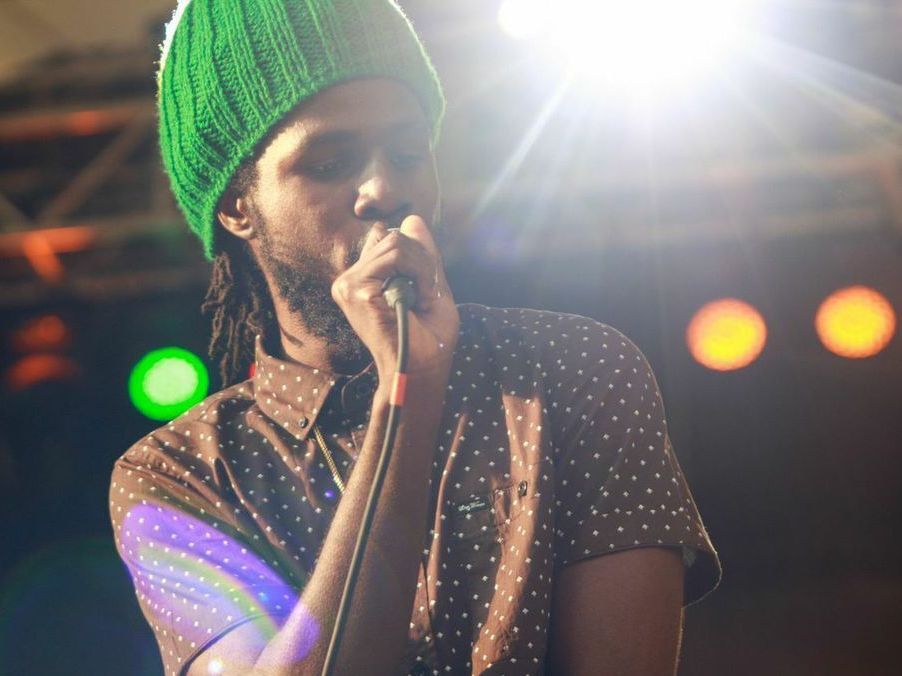 Summertime bodes well for reggae music. The genre's biggest crossover moves — from Sean Paul to I Wayne — have been made during the balmier months, when Americans relax enough to stretch the geographical limits of our soundtracks. This year's case in point: Chronixx, Jamaica's current it-artist, steadily making strides on international shores. The 21-year-old Rastafarian singer — his sweet, sincere tunes and old-school-yet-not-overly-nostalgic sound are welcome antidotes to an irony-laden culture — released his debut EP, performed on Jimmy Fallon's show and, this weekend, took the stage before a filled-to-capacity crowd for a free concert at Central Park SummerStage. That venue holds 5,500 people and an estimated 2,000 more stayed outside the gates, listening. It was a LargeUp and Federation Sound event with New York's iconic Rice and Peas sound system DJing throughout. Backstage, Chronixx reasoned with Baz Dreisinger about music-making, Rasta and the state of reggae.

BAZ DREISINGER: What a show! The crowd hit capacity almost right after the gates opened. Even Mick Jagger came out. What does it mean to you to be at SummerStage — one of few current reggae artists to perform at this venue in recent years?

CHRONIXX: Central Park was definitely, officially one of my most exciting shows ever. New York City is home to a lot of Jamaicans and Caribbean people — I think there are more Jamaicans here than in Jamaica. It's home. So it feels like getting accepted at home.

And performing on Jimmy Fallon — again as one of few reggae artists to ever do so?

It was wonderful, but frightening, because I knew that everyone in Jamaica was watching, and if you mess up, you mess up in front of your whole family. My mother was watching, my grandmother was watching — it was scary. But other than that, it's just music — it's living. The stage becomes insignificant, the setting becomes insignificant, and you fall in love with the music and get in that state of relaxation and from there, the interaction and performance come to be.

How did it, literally, come to be — that Fallon performance?

Jimmy Fallon came to Jamaica and was staying at Goldeneye [the boutique hotel owned by Island Records founder Chris Blackwell]. He was on vacation, and he heard my music and liked it. So it was that simple: on vacation in Jamaica, hear some reggae, like the reggae — and here I am.

After the Fallon performance you posted something on your Facebook page about not having to water down one's Rasta identity in order to achieve crossover success. Explain what you meant.

Rasta is our platform, that's where we stand. And if you remove that platform, you're not standing on anything. As a Rasta, as a Jamaican youth, that is my culture, that is who I am. So regardless of the music, the instrumentation, which show I am at — I'm going to be a Jamaican Rasta. When you look at the music charts, there's reggae there but you don't see nothing about Rastafari — and that doesn't matter to me. There are a lot of youths out there who want to hear what I have to say as a Rasta, and I can't brush those billions of youths under the carpet, just for a mainstream audience.

Is a mainstream audience something you think about? Current reggae has a kind of boom-and-bust history with American audiences: moments of great crossover success, but little lasting presence.

That's because for us, as Jamaican youth with our morals, we are only willing to go a certain distance to please the mainstream. For me, unless people respect my morals and my culture, I can't go too far. The industry doesn't respect our culture; they try to give it a pop image. That's what the celebrity thing is in America: You're talented and then they refine it to suit everybody. You can reach to a level but then you're asked to do and be things that are not acceptable. Dem say America is the land of the free, but except for the Rastaman — the respect is not there. I think that's it with the mainstream thing: Celebrity life can't work for a person like me; as Rasta you deal with the earth, you deal with farming, with meditation, health — and a celebrity life doesn't facilitate any of those.

So how do you plan to navigate that celebrity world, considering?

My plan is just to live and do what I can, until I can't do it anymore.

Last time Jamaican music was seriously on America's radar it was dancehall: Sean Paul, Elephant Man, back in the early 2000s. Do you think roots reggae, your music, is more marketable?

Americans are marketing geniuses. They can market fridge to Eskimo people. Dem can market anything. You ever hear some song that's number one in America and you're like — this? So they can market dancehall, roots — whatever.

Your album Dread & Terrible is independently released. What made you go that route?

Just how a woman say she want to remain single for a while, you know, and see whaa gwaan? That's why. You get signed too young and you get signed for less than your potential. It's actually my EP, but everyone called it an album, which it's not. It's a project that captured a vibe I was feeling, not a full album.

You're identified — along with other young artists like Protoje and Jesse Royal — as part of Jamaica's "new roots movement," which blends old-school roots music with a kind of new-age hipster aesthetic. Does this label annoy you?

Not at all. We are a movement, with a lot of youths — a whole heap o we shouting at the same time, very loud and very vibrant.

Your father was a reggae artist named Chronicle, so you practically grew up in the studio. How old were you when you first started making music?

Who are you listening to these days?

Enya. Her vocal abilities, her elasticity, ability to replicate strings and percussions — amazing.

Your song "Smile Jamaica" is the perfect replacement for Bob Marley's "One Love" in all the tourism ads. Would you be up for having that song used in those ads featuring happy tourists?

That song is for the people and if it will ultimately benefit the people of Jamaica, by all means.

What is your songwriting process like? How do you make music?

It can come from a memory, a color, a feeling. From there, it becomes a word or a phrase or a sound. I meditate a lot with my thoughts. I spend half an hour every day just thinking, and that's really how I make music. Melodies for me are more like a mechanical thing — you know what kind of melodies will drive certain feelings — that's the technical part. When you meditate so much, the songs are already there, so you go in the studio it flows.

See, I'm not a perfectionist with music. I like it raw; I don't like to polish it too much. If so God give it to me I'm not going to use my human brain to replace heavenly things with human things. A lot of things that don't make sense to our brains make sense to our souls. So the grammar not right — the grammar is not correct. Some of the "ares" could be taken out; some of the "is" could be "are"; you didn't pronounce the "t" properly — but it's feelings. When you think, you don't think in complete sentences. And when you feel, you don't feel in perfect grammar.