Accessibility links
All Together Now: The Beatles Are (Back) In Mono : The Record The latest reissue project in the never-ending celebration of the most famous catalog in rock 'n' roll goes back to the beginning. Does listening to The Beatles in mono make sense in 2014?

All Together Now: The Beatles Are (Back) In Mono

All Together Now: The Beatles Are (Back) In Mono 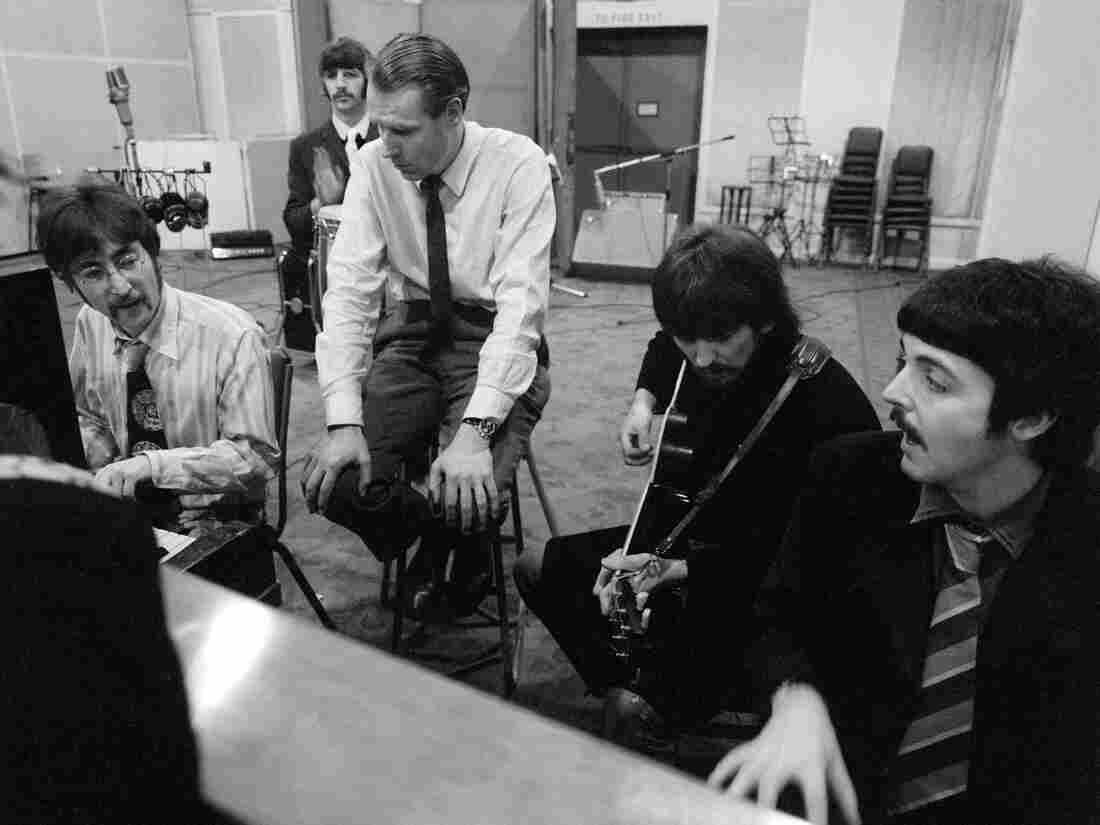 The Beatles with George Martin in January 1967 at Abbey Road Studios in London. Apple Corps Lt/Courtesy of the artist hide caption 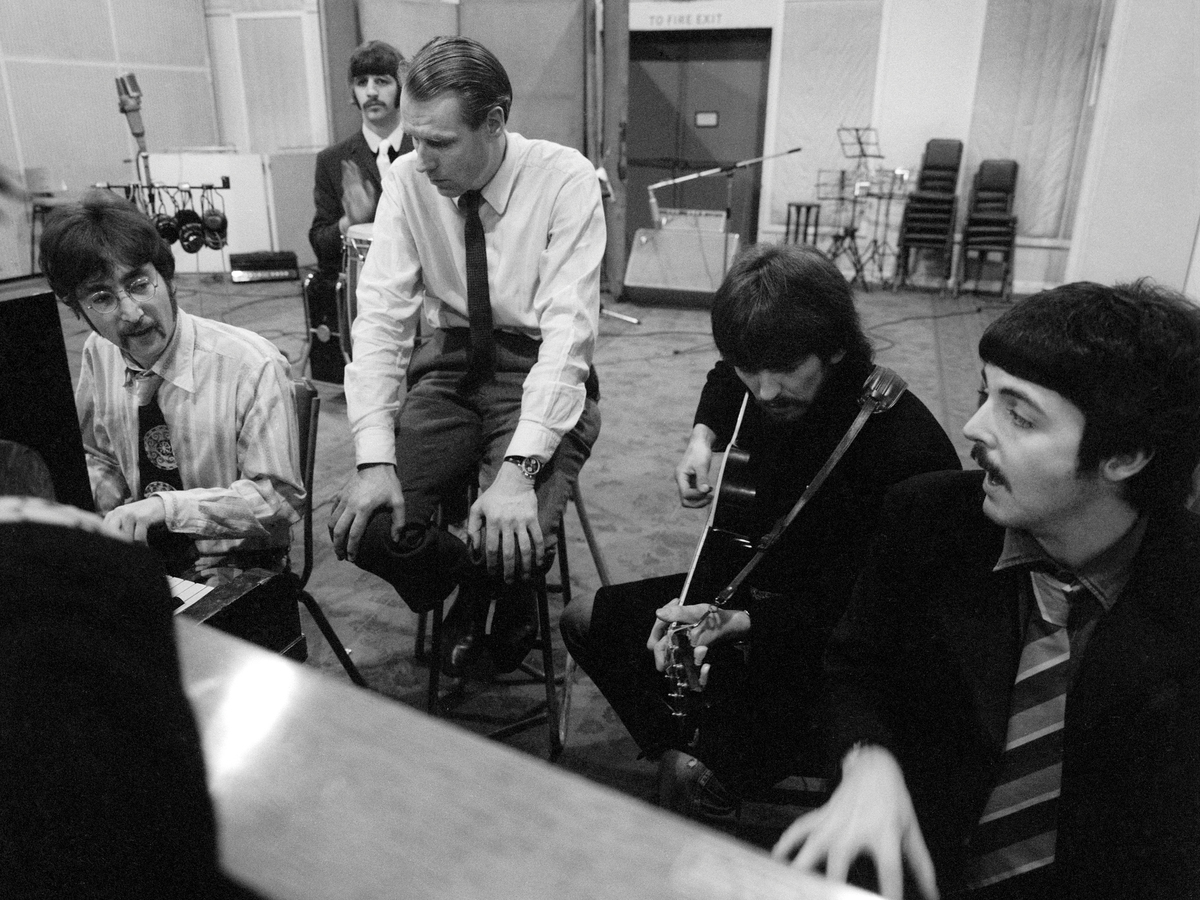 The Beatles with George Martin in January 1967 at Abbey Road Studios in London.

Apple Corps Lt/Courtesy of the artist

By now, three-fourths of the way through The Beatles' sort-of-official 50th-anniversary year, Fab Four fatigue is understandable. The past eight months alone have seen the Emmy-nominated Night That Changed America TV special (based on the 50th anniversary of the group's landmark Ed Sullivan appearances), the reissue of the American album catalog, an ongoing flood of increasingly repetitive books, and the indefatigable 72-year-old Paul McCartney continuing his more-or-less dozen-year tour.

And all of that comes after more than a quarter-century of revisiting the canon: the revelatory-at-the-time first CD editions in 1987, followed by a fascinating flood of CD bootlegs — which lost the group millions before they sorted out their byzantine legal affairs and took command of their recorded ephemera with the sprawling Anthology album and video series beginning in 1995. Five years ago, the 1987 CD editions were remastered (and drastically improved) — in stereo and, for the first time, mono — and followed over the next couple of years by stereo vinyl reissues and the catalog finally being released on iTunes. Along the way, there have been two double-CD collections of BBC recordings and fancy Blu-ray reissues of The Beatles' films (except the death knell of Let It Be, which they seem not to have the heart to revisit), among many less relevant enterprises. 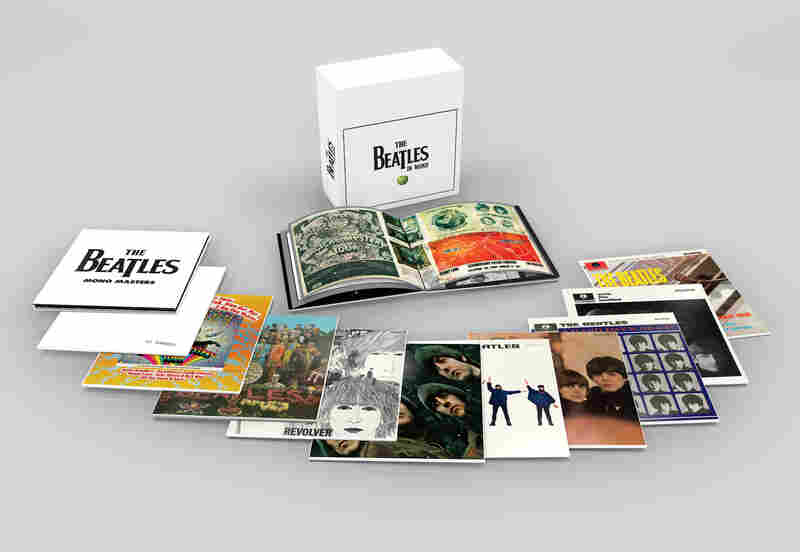 Today, just over 45 years after The Beatles were last together in a recording studio, the deluge has reached a final frontier with another rerelease of the group's catalog — this time in mono and on pristine 180-gram vinyl, in meticulous, near-exact reproductions of the original British releases: with the same fold-over sleeves, similar laminated front covers, the same typefaces and all that. (The albums — excluding Let It Be and Abbey Road, which were never officially mixed in mono — have been newly mastered using the same procedures and transfer notes made by the original cutting engineers, and will be available individually and as a lavish 14-LP box set that comes with a hardcover "booklet" that's basically a 108-page, memorabilia-filled coffee table book.)

It's a paradoxical, back-to-the-future, somewhat perplexingly retro exercise: releasing mono vinyl editions of possibly the most scrutinized canon in the history of recorded music — in 2014. Apart from yet another Rosebud-like search for affluent fans' long-lost youth, how does rolling out the catalog — which includes songs that were among the most well-known in the modern era even before they were first released on CD — another time make sense?

Actually, there are several good reasons why it does, and you don't have to be an audiophile or over 40 to appreciate them.

The first one is simple enough: Nearly all of these songs were intended to be heard in mono, on vinyl records. Although stereo recordings ("involving the use of separated microphones and two transmission channels to achieve the sound separation of a live hearing," i.e., two speakers) had existed for decades, during the Beatles' career mono was the norm for the overwhelming majority of the population; most people owned single-speaker "record players" until stereo systems began to proliferate in the late 1960s (and mono recordings were rushed off the market with the same zeal that the record industry used to replace vinyl with CDs around 20 years later). Until the release of The Beatles' mono catalog on CD in 2009, the original mono albums — which untold millions of us grew up on — were available only as scratchy garage-sale items or pricey eBay or record-store finds. (Mint copies of the last three albums available in mono, Sgt. Pepper's Lonely Hearts Club Band, Magical Mystery Tour and the White Album, regularly sold for hundreds of dollars.)

Consequently, as many fans have maintained for decades, the mono versions are the "real" Beatles albums. "The Beatles [and producer George Martin] spent about three-fourths of their mixing time getting the mono mixes right for the records that most people would hear, and for AM radio," says Sean Magee, the Grammy-winning Abbey Road engineer who oversaw the new mono releases. Even as late as 1967, the Beatles were present for the mono mixing of Sgt. Pepper but left the stereo mix to Martin and the engineers — thus, the mono version is the Beatles-sanctioned one.

Be that as it may, there's little question that even today most of the Beatles' catalog up to 1966-67 simply sounds better in mono: In both a special press preview of the new set at New York's Electric Lady Studios and playing vintage mono albums at home, the group's first two albums and their more-simply arranged later material — songs like "Dizzy Miss Lizzy," "I'm Down," "Revolution," "Get Back" — positively jump out of the speakers with twice the energy of their stereo counterparts. The charging guitars, Ringo's splashing drums and Lennon or McCartney's rousing vocals all come bounding at the listener like a boisterous puppy.

By contrast, in stereo the early material just sounds awkward: The overdubbed elements seem grafted on and ill-balanced, instruments swoop in and then vanish, voices come out of one speaker and their echo out of the other. The delicacies and definition of stereo can overcomplicate simple rock 'n' roll.

"Mono sounds good no matter where you're standing in the room; it has more punch to it," Magee says. "It takes very skillful arranging and mixing: It's a bit like a sonic jigsaw puzzle where you have to put everything in its right little spot or they overlap and start to interfere with each other."

With the availability of four-track recording in late 1963 (and, five years later, eight-track) and the group's increasing sophistication, the arrangements became much more complex. Although The Beatles still favored mono, by the mid-1960s the stereo mixes began taking on greater importance, and by the time of Magical Mystery Tour and the White Album the stereo versions are generally superior (although there are pleasant surprises in each, like the lovely AM-radio, Byrds-y shimmer of the mono "Dear Prudence"). Because the mixes were done separately, often weeks apart, there are many subtle variations between them (laid out in detail in the liner notes, and in exhaustive detail on websites like this one). Some variations are barely noticeable (yes, the bird noises on the mono "Blackbird" are indeed different from the stereo one; yes, the drums drop out for a couple of bars on "I Am the Walrus"); some are ear-perking ("Don't Pass Me By" and "She's Leaving Home" are both faster in mono; "Help!" and other songs have slightly different lead vocal takes); and except for a considerably shorter mono version of "Helter Skelter," none are world-changing.

Oddly, what is most striking, and what brings the biggest new/old thrill, is the longer fade-outs on many mono versions: Eight seconds may not seem like much, but with songs you've heard dozens if not hundreds of times — when you're actually hearing a few more seconds of McCartney ad-libbing at the end of "Get Back" or the final strum of "Dear Prudence" — it's a geekishly fascinating if minor alternate history: The canon is not as set in stone as you once thought.

Needless to say, these mono recordings are far more sonically logical on vinyl. Digital, particularly CDs, is the best common format for definition and clarity of sound, and the 2009 remasters revealed details on the recordings that most fans had never heard before — and were never meant to hear: The surface noise of vinyl and even early CDs hid many errors and imperfections. Throughout The Beatles' catalog, you hear mistakes, coughs, talking, chairs squeaking, random tambourine shakes — and what certainly sounds like a squeaky bass-drum pedal through some of With the Beatles. While many of those flaws are still audible here, they're much less noticeable.

But most of all, what makes these remasters special is the warmth of the vinyl pressings and the compressed sound of the mono mixes, period details that evoke the same sensations as muscle cars or the swish of miniskirts in film clips of '60s street scenes — an intangible memory flash, a tantalizing tug of nostalgia that brings back the summer days when the high-pitched sound at the end of "Long Long Long" would wake up your childhood dog or the fade-out of "She Said She Said" reflexively told you it was time to get up and flip the album. These records bring an impressively (and affordably) vintage Beatles listening experience, even if you're using a Crosley rather than a 1960s-era Close 'N Play record player. At best, for younger fans it's a more authentic experience than the past couple of generations have had; for those longer in the tooth, it's like finding photos from your childhood that you'd never seen before.