Accessibility links
Review: '1989' And The Many New Voices Of Taylor Swift : The Record Swift has received accolades and damnation mostly for her image or the messages she supposedly sends, which must be irritating for a musician so clearly devoted to perfecting her techniques.

The Many New Voices Of Taylor Swift

The Many New Voices Of Taylor Swift 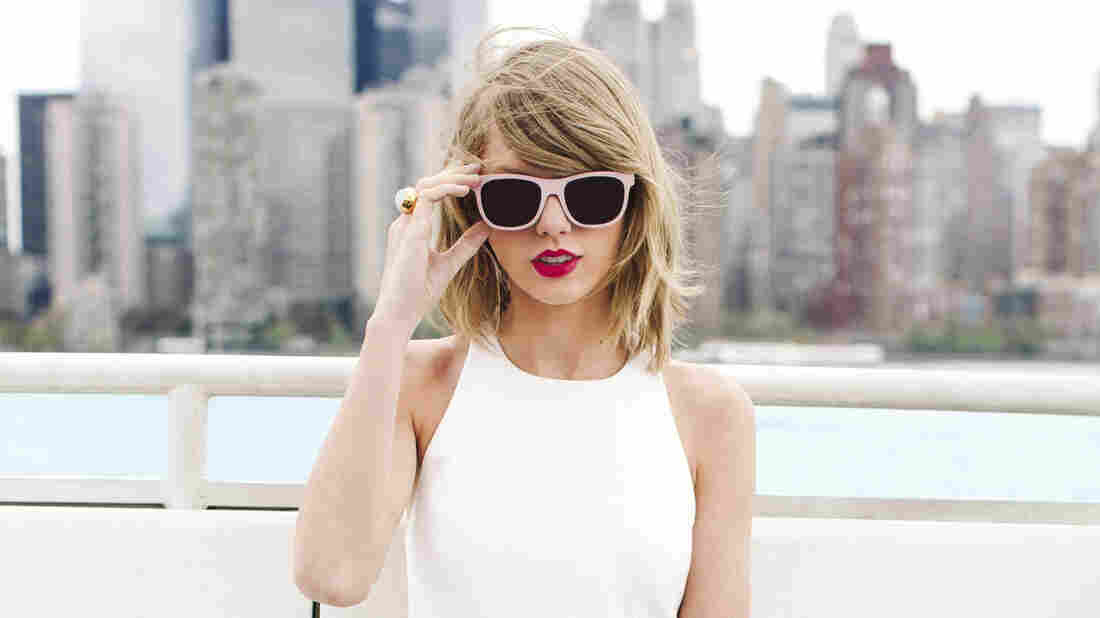 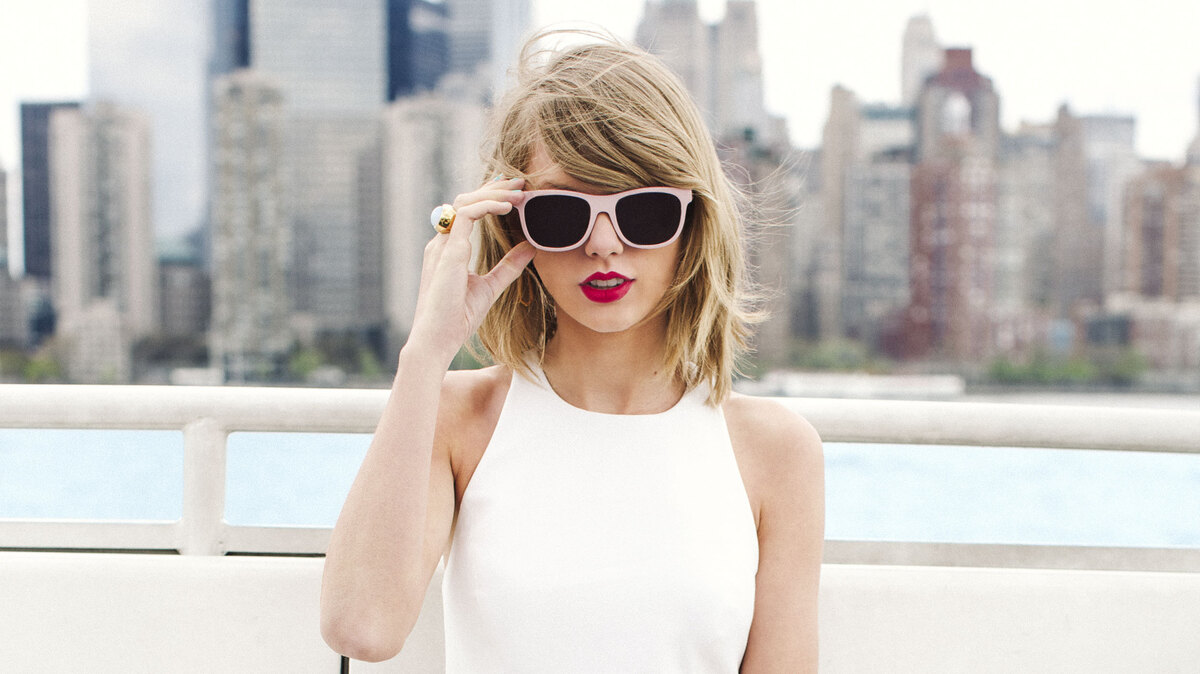 As the White Queen of a pop realm in which stars are the chess-piece avatars moving on the other side of each fan's ever-shifting looking glass, Taylor Swift has been able to inhabit many contradictory identities. She's a pretty, popular beneficiary of privilege and a champion of the nerd underdog; a self-defined good girl and a boy-obsessed tabloid star; a music industry savior and, to some, an embodiment of the low artistic standards today's shiny pop game sets. What she is primarily, however, in the life she actually lives, is a songwriter and a musician. She writes the majority of her own material; plays four instruments and by all indications is the primary architect of her own sound. Yet like most women artists through the Top 40's history, Swift mostly receives both accolades and damnation for the messages she sends, not the way she shapes them within her compositions and recordings. This must be somewhat irritating for a woman so clearly devoted to perfecting her techniques.

A generation has grown up with Swift, loving her as an accessible everygirl who understood 15 and 22 and every awkward growth spurt in between like no one since the age of The Shirelles. Most of these fans don't sweat the details of how she creates songs they claim as their own. Yet her transition from teen star to self-actualized young adult powerhouse has been mostly a musical one. Swift's well-paced movement away from country-based balladry to more complex, electronically oriented, often beat-driven, productions shows that she is an artist (call her a craftsperson if that other word makes you uncomfortable) eager to challenge herself. That's the overwhelming message of her new album, 1989 — not that she's a grown-up now, or more interested in sex, or sick of Nashville, or in love with New York. 1989 is about Taylor Swift experimenting with new sonic approaches. And most of all, it's about her finding a new voice — actually, several new voices, which she assumes like new characters while always remaining herself.

Taylor Swift: 'My Confidence Is Easy To Shake'

It's worth pausing here to admit that as a singer, Swift has always been limited. She endured scorn early on for her wobbly pitch and tight, nasal delivery. Because of her exceptional gift for inflection — the subtle adjustment of words and phrases to suggest moods like doubt, hope, and intimacy — people have praised her style as conversational. The ways Swift sings has always been as important as her lyrics — how she spits out the different between short skirts and t-shirts in "You Belong With Me," or her various attacks on the word "ever" in "We Are Never Ever Getting Back Together" make the songs feel particular, personal. Much has been made of Swift's lyrical attention to detail, but those details don't resonate that strongly on the page; just compare a line like, "You gave me roses and I left them there to die" to, say, Joni Mitchell's "All romantics meet the same fate some day/Cynical and drunk and boring someone in some dark café." Swift's songs aren't that literary or that wise (yet, she's still only 24). They're touching because the noise-cancelling intimacy of her performances and the wit and clarity of her arrangements turn them from standard fare to heartfelt disclosures.

The flexibility and tonal range of Swift's reedy alto, expanded through canny use of 21st-century pop technology, is what makes 1989 a pleasurable listen. This isn't because she and her top-gun producers (Max Martin and Shellback, Ryan Tedder, Jack Antonoff, and on one lovely late-album cut, Imogen Heap) are processing her vocals to sound bigger, or conventionally better. If Auto-Tune is in use here, it's well-camouflaged by more other, more interesting vocal treatments — the blending of her high note with a ringing, compressed backing track on the chorus of "All You Had To Do Was Stay"; the clipped verses on "Blank Space" clicking with the beat like a gearshift; the beautifully wavelike swells of her multi-tracked vocals on "This Love." Having played with this kind of cyborgian production on the singles from her previous album, Red, Swift goes fully prosthetic here, in ways that make her singing more emotionally rich, not less.

She's also playing the (mostly) friendly rival to her fellow women on top. It seems like she almost had a checklist: starting with the Robyn-like aerobic soul intonation on the otherwise innocuous "Welcome To New York," 1989 challenges a dazzling variety of female pop singers, some past, but mostly present. As per the album's stated concept — reviving the chromium sheen of the late 1980s, which, as Molly Lambert noted in Grantland, was a ripe time for genre-defiers like Swift — moments on 1989 evoke the formerly futuristic synth-rock adventures of Sinead O'Connor, Peter Gabriel or Bruce Springsteen. But mostly, it sounds like Swift dipping into new methodologies, not as an imitator so much as a newly minted studio rat mastering the ropes.

"Blank Space" has the Xanax drip of a Lorde song, but instead of that singer's cool affect, Swift injects sarcasm into its verses, a good girl gone slightly cynical. "Bad Blood" takes on Swift's alleged frenemy Katy Perry with a bright, anthemic chorus, but tones down Perry's brass and replaces it with a sassiness that recalls Avril Lavigne (a source Swift's mined before, on Red.) "I Know Places" has Swift trying out Rihanna's Caribbean stutter, but continually breaking the sultriness with forceful exclamations and reaching choruses. "That's How You Get the Girl," with its nearly one-note melody and chilly drive, explores what a Britney Spears song would sound like with coyness replacing the come-on. And "Wildest Dreams" Swift aims for Lana Del Rey's swoon, but ends up with a gradual melt — connecting much more gracefully to the intellectuality and sometimes uptight poise that have long been part of her persona. In every case, what might have been imitation works as her own expressiveness, because she always stays herself, too, retaining that obsessively well-modulated way of moving through verses, and the letting go on choruses, that's always made her sound like both a thinker and a declaimer proud to state her truth.

Swift doesn't take on everyone. She's no diva, and she knows she never will be; even when she's going full-throat on many of the album's choruses, she doesn't mess with melisma or the sort of technically difficult shading that distinguishes the most vocally adept. Instead, Swift plays with multi-tracking, subtle looping, synthesizer tweaks and wordless embellishments, expanding her vocabulary in ways that go beyond words. Swift's voice on 1989 doesn't simply stand for the freedom Swift feels as a young woman with enough clout to break the mold that made her so commercially viable; its enhancement is that freedom. Choosing to work with men who've helped craft other female stars' vocal personae — especially Martin, so linked to the post-human performances of Spears — Swift has risked being accused of surrendering her authority. In fact, these songs show her to be more self-possessed than ever, incorporating her own strengths into the magical soundscape of computer-driven dance pop.

For all of its verve, 1989 is a transitional album for Swift. She's moving toward a form that she can fully own, one that allows her to retain the introspection and informality that has always made her music special, but which keeps expanding instead of dialing down or always resolving in an easily accessible sing-along. One of the album's emblems is "Out of the Woods," credited to Swift, Antonoff and Martin. Revolving around a classic Swift lyric about romantic uncertainty and the anxiety it produces. Antonoff's instrumental track is layered like a pile of autumn leaves: elements scatter and pile against each other, beats colliding with multiple vocal tracks and other sounds. Martin produced Swift's vocal, which veers from breathy to determined to confiding to exasperated; pushing close, it's both almost too hot and a bit elusive in its instability. Then there's what Swift brings: that way of skittishly moving through her memories of scenes with the boy she ultimately lost; her ability, as a singer, to flip through several emotions in one phrase, sounding like she's just saying what comes to mind. "Out of the Woods" tell a story about a woman telling herself a story, not believing it, throwing it away, coming back. It ponders the creative act of neurotic romanticizing. It's also about falling in love with creating. And that's the self-directed love story Taylor Swift deserves credit for now.