Accessibility links
TV On The Radio And The Paradox Of The Midcareer Band : The Record Past the hype of the newcomer, not yet granted the deference of veterans, the allure of a band making a go of it in the murky middle may be subtle, but it can still be potent.

TV On The Radio And The Paradox Of The Midcareer Band

TV On The Radio And The Paradox Of The Midcareer Band 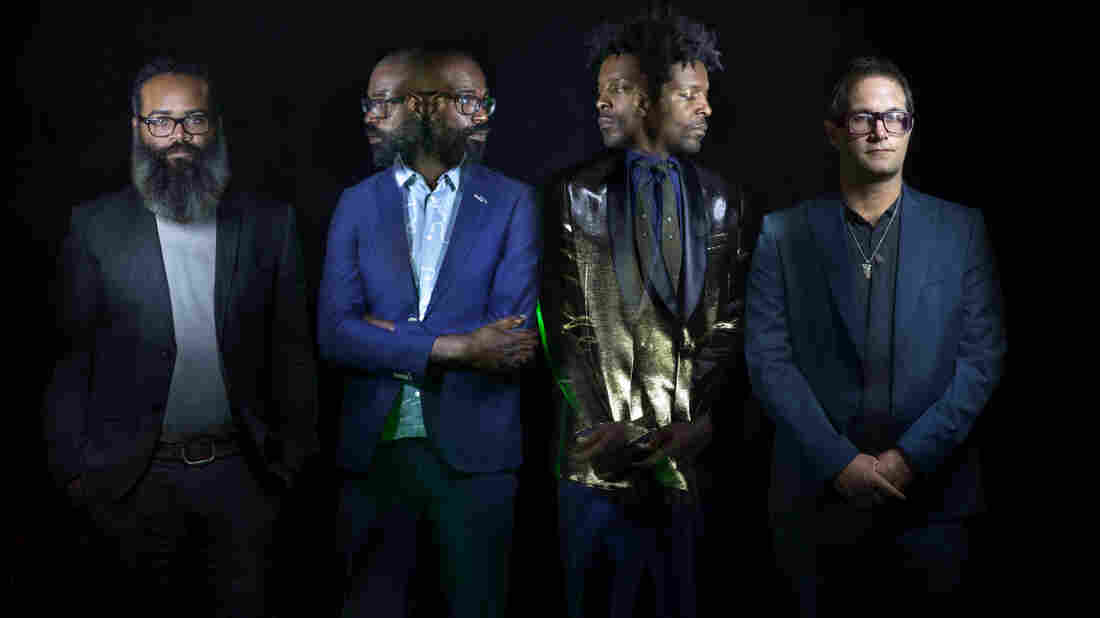 TV On The Radio's new album, its fifth, is titled Seeds. JUCO/Courtesy of the artist hide caption

toggle caption
JUCO/Courtesy of the artist TV On The Radio's new album, its fifth, is titled Seeds.

Pity the midcareer artist, stuck in the long middle distance of working things out. Youth is honey, redolent of novelty, physical charm and energetic self-absorption. Veteran status, while still dangerously marginal, at least affords deference, since few in our culture expect creative lives to last as long as life itself. Young artists run on guts and glamour, while older ones may find themselves motivated by the respect they've finally received. But in the middle, things get murky. The long haul of perfecting an aesthetic can turn repetitive and feel fruitless. Material needs — paying rent, raising families — feel more pressing. Artists lucky enough to have an audience often find those fans drifting, a little bored, thinking they know what to expect. The temptation to give in to inertia vies with the worry that promise is turning into waste.

This existential moment has felled many a great rock band. The foundational groups of the classic rock era produced great masses of work and often burned out after less than a decade, or continued in pieces, the way The Who or even The Rolling Stones did, with key members lost to misadventure. Over time, rock became more like a profession, and bands tended to last longer, but many still struggle after an initial rush of greatness. Pixies, Husker Du, The Replacements, Pavement, even The Clash had relatively short runs and then lost the thread. Personality often played a key role, but there was also the problem of trying to stay relevant within a music world that always favored big gestures and that new-car smell over subtler innovations.

For bands that last, however, an interesting thing happens around the four- or five-album mark. A sense of urgency sets in. The music becomes more focused, but also reaches for something new. U2 made The Joshua Tree and became the monumental force that many listeners hate and many more love. R.E.M. recorded Document, turning its shambolic sound sharp and confrontational. Talking Heads found a way to make its Afropop experiments marketable on Speaking in Tongues. Metallica got seriously anthemic with its self-titled "black album." Sonic Youth went big with Daydream Nation, as did Wilco, in a humbler way, on Yankee Hotel Foxtrot. Radiohead, ever contrarian, produced Kid A, turned sharply down the avant-garde path it's been forging ever since.

Such acts of repositioning can initially prove confusing for longtime fans. Bands mess with their own formulas to wake themselves up or to convince themselves that their mission still matters. And, yes, sometimes, to prove themselves commercially viable, which does matter in popular music. But to some, such moves feel like a sellout. When TV on the Radio's fifth album, Seeds, hit the Internet this past week, instant reactions were mixed: Some fans welcomed the power and directness of the new songs, while others questioned why the vocals are pushed upfront, the hooks so obvious, the band's relentless eclecticism toned down in favor of cleaner production and tighter songwriting. The band's lead singer, Tunde Adebimpe, told The Wall Street Journal that hummable melodies were the goal. To some, this might seem like a sacrifice — the multilayered disarray of songs that veered in unexpected directions has always been part of TV on the Radio's magic, and here the band is, making a whole album of songs that home in on the body's pleasure centers, inspiring dancing and singing along.

Listen to Seeds on repeat, though, and the point of its relative concision emerges. A collection of love songs, Seeds travels through the life cycle of relationships without pushing the concept too hard. Each track stands up well on its own, but together they become something bigger: a view of connection and loss from the many different angles that a lover has occupied after years in the game. The first two lines of the opening song, "Quartz," almost shouted by Adebimpe over humming voices and warning bells, acknowledge the work of human intimacy: "How much do I love you? How hard must we try?" The scatter of elements in the song's loop-driven arrangement, sometimes going ever so slightly off-kilter but then realigning to march forward, expresses the way that doubt invades long-term relationships, only to be defeated through the willingness to commit again and again.

Seeds is about that diligence, not merely in the lyrics, which look at love from giddy starts on the dance floor to bitter ends on a lonely street, but in its sound. Recorded at producer and founding member David Andrew Sitek's Los Angeles studio over the course of a relaxed year, it reflects a process of rebuilding after the death of the band's bassist, Gerard Smith, of lung cancer in 2011. At first, Adebimpe has said, the surviving members weren't even sure they were making another album; they recorded two songs and released them, and kept working until an album began to take shape. Yet Seeds, though different from the band's previous albums, doesn't feel exploratory so much as exquisitely edited; what fascinates is its clarity and purposefulness. Whether it's the "Sledgehammer"-like acceleration of "Happy Idiot" or the two-minute-long keyboard and strings intro of "Ride," which then opens up into an unending crescendo lifted by Jaleel Bunton's New Wave drumbeat, these songs hit their marks powerfully and without dissembling. Though they welcome a mess of elements, they never stop making sense.

For most of TV on the Radio's life, almost falling apart was a big part of its process. The songs on albums like Return to Cookie Mountain and Dear Science were often like brownstone attics full of memories; elements of folk song, gospel, African music, trip hop, and progressive rock collected in big piles, seemingly rearranging themselves. Singing through the complexity, Adebimpe and guitarist Kyp Malone often sounded like they were only beginning to tell stories that could never be resolved. The band's more focused songs, like fan favorite "Wolf Like Me," hunkered down into punk, pushing away the dust. But the dust was the point. This was music for a digitized millennial age when bits of information floated free, undermining old stories but never forming solid new ones. It was perfect for a time when rock itself was collapsing, being made anew by the influence of hip-hop, taking up uncertain residency on the electronic frontier.

More than a decade later — the band's first recordings came out in 2003 — the idea of rock as pop's ruling paradigm is pretty much dead at the hands of the now-adult generation born after Kurt Cobain left the earth. The attic of memories is where everybody lives, sampling, borrowing, repeating. TV on the Radio has decided to hone things down and take a stance for rock's relevance. In a nearly impossible coincidence, it feels similar to the orientation of Taylor Swift's new blockbuster. Seeds bears little surface resemblance to 1989, but both represent mightily for that moment just before rock's conservative impulses kicked in during the early 1990s. The fleshy grind of the Pixies, the swoon of shoegaze and the playful curiosity of synthpop all leave a mark on songs like "Lazerray" or "Careful You," without any one source being obvious. Central to TV on the Radio's distillation of these sources is the perfect balance of electronics and rock drums and guitars, bouncing atomically around vocals that don't wander but grab their melodies, melding instead of vacillating between rock rawness and soulful finesse. What Seeds takes from the '80s is the knowledge that rock can be boundary-breaking and still commercial; that it can have velocity and space at the same time.

Another conviction behind Seeds is the idea that a band can work as a unit without fetishizing togetherness. In one of the many interviews he and Adebimpe have given about the recording process behind Seeds, Sitek said that he would set up shop in his studio for up to 18 hours a day. Malone might come in early; Adebimpe would show up late. Bunton would hang out. Each member would add elements to a track or challenge what was already there. The songs would change radically, over time, reshaped through arguments and shifting leadership. "No one in the band is in charge," Sitek said. For Seeds, TV on the Radio also made room for outside collaborators for the first time, including the Swedish pop star Erik Hassle; Daniel Ledinsky, one of the co-writers on Tove Lo's "Habits"; and Sitek's frequent collaborator Kittie Harloe. These new minds clearly pushed TV on the Radio beyond old habits and are responsible for some of Seeds' more infectious hooks.

The band's openness might be the secret of longevity for the bands with whom TV on the Radio is most closely associated. Even more than their peers the Yeah Yeah Yeahs, Interpol and The Strokes — all on fourth or fifth albums themselves — TV on the Radio survives by granting its members the freedom to flourish in other projects, and welcoming the new influences they bring in. Sitek's production work for other artists, particularly, has honed his ear in ways that push his band mates. By being open to each individual's changes, TV on the Radio has incorporated change into its own process in ways that enrich every new effort.

Not all change is welcome, especially in midlife. The loss of Smith is evident on Seeds. His last album with the band, Nine Types of Light, had a spacious rhythmic soul that the quartet he left behind doesn't try to replicate here. In some ways, the title track seems to be a harkening back; it's also a resolution. A slow and stately dialogue with a lover who might not be trustworthy, it comes on like both a new beginning and an act of mourning, with Adebimpe's words making peace with the situation's ambiguity. The song's bridge poses a choice: "One is you, the other me," Adebimpe intones, his voice jumping as it suggests another way: "Free as air is third, you see." Staying free while together, the song suggests, could be an alternative to coming apart. In music-making as in love, that's how relationships survive the murky middle.