Accessibility links
WKRP In Perpetuity : The Record The AM radio station that gave the late 1970s series WKRP in Cincinnati its name was better than most real radio stations of its era. A new reissue includes most of the songs broadcast on the show. 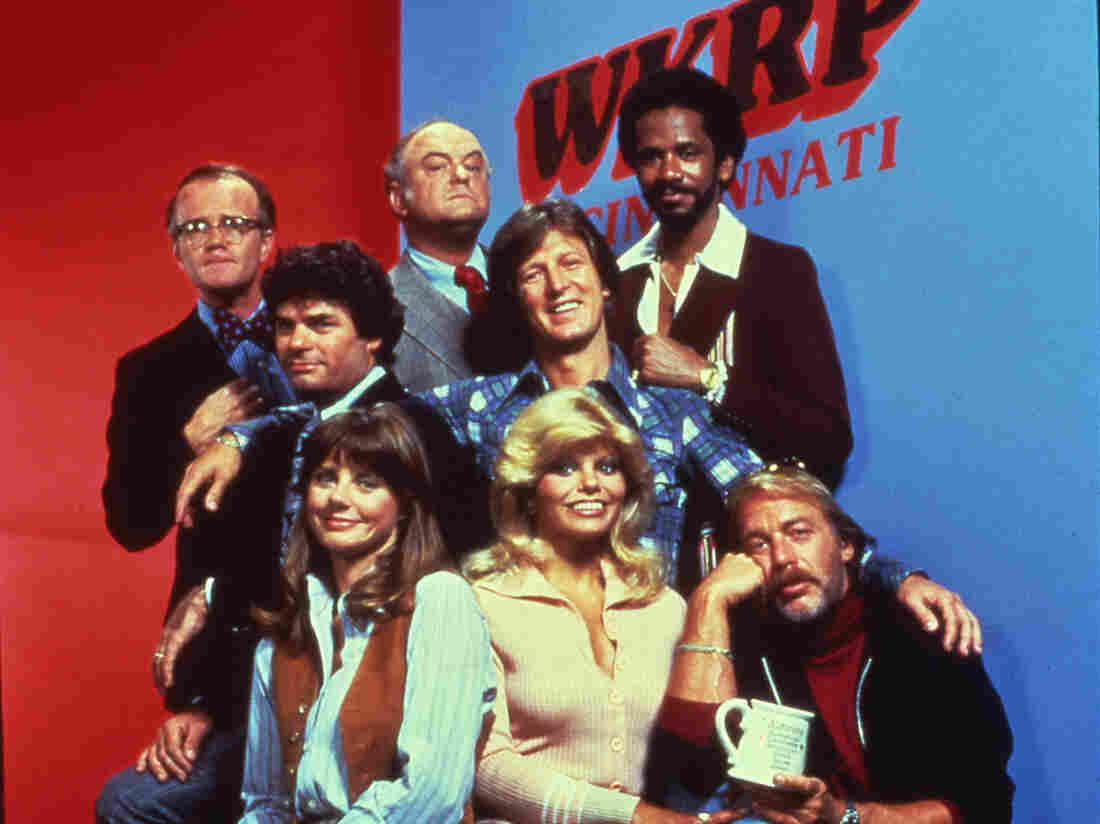 The cast of WKRP in Cincinnati, recently reissued on DVD by Shout! Factory, which collected licenses to include most of the original music broadcast on the show. Courtesy Sony Pictures Television hide caption 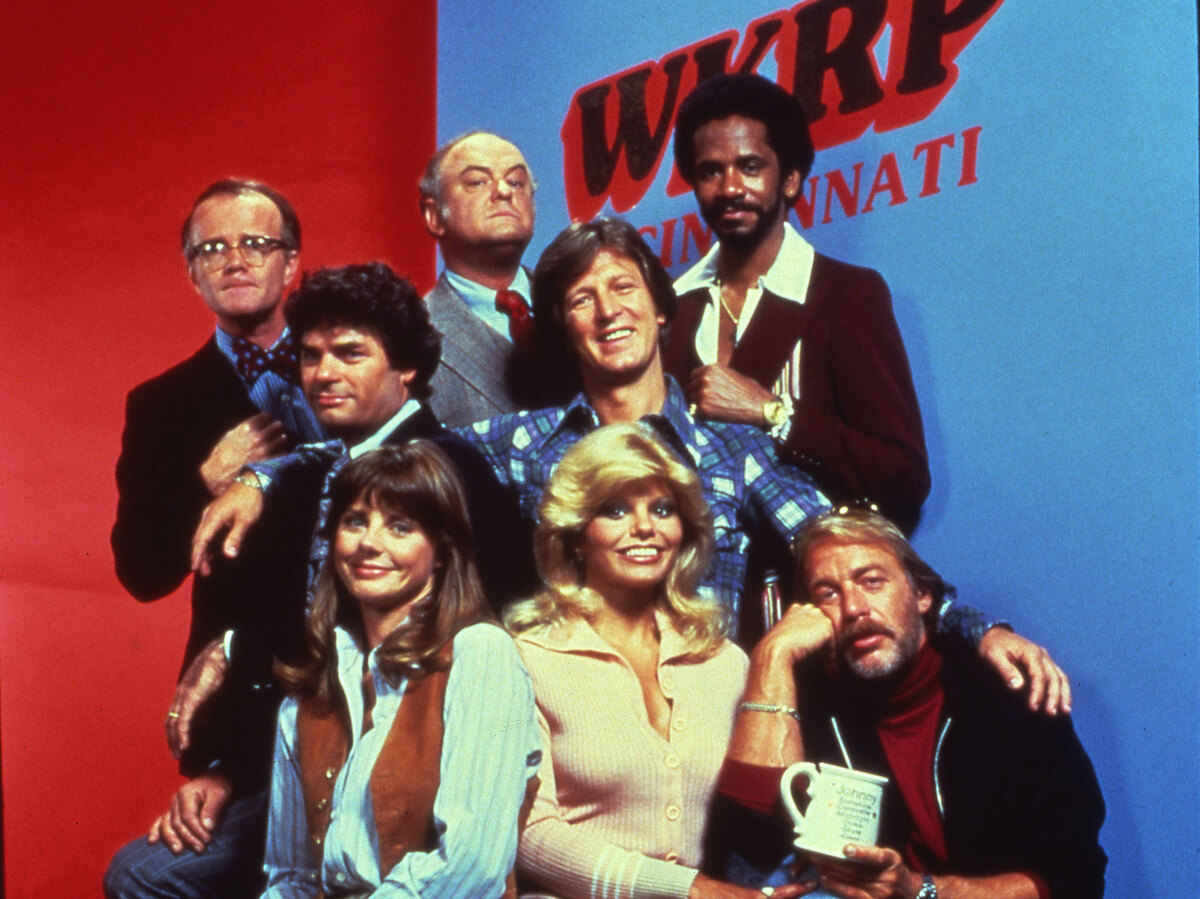 The cast of WKRP in Cincinnati, recently reissued on DVD by Shout! Factory, which collected licenses to include most of the original music broadcast on the show.

Television has been instrumental in rock and roll history since Elvis Presley's first appearances on The Ed Sullivan Show in 1956. Nineteen years later came the debut of Saturday Night Live, arguably the first network program with a fully rock-bred sensibility. But WKRP in Cincinnati — which ran on CBS from 1978 to 1982 — was the first American prime time television show to take rock seriously as a subject.

Set at a last-place AM radio station that hires programming director Andy Travis (Gary Sandy) who switches its format from "beautiful music," aimed at senior citizens, to rock, WKRP in Cincinnati disappeared from syndication once the licensing fees ran out for the many original recordings it utilized — everything from Ted Nugent's "Queen of the Forest" (the first song the station plays under the new format) to Jerry Lee Lewis's "Whole Lotta Shakin' Goin' On" (from the series' finale). When WKRP re-appeared on TV Land in the mid-2000s, a number of re-recordings were subbed in, as they were when the first season appeared on DVD in 2007. Now, Shout Factory has issued all four seasons of WKRP in Cincinnati as a box set — and with a handful of exceptions, re-licensed the original music as well. (There's a detailed breakdown of what made the set — shaded pink — and didn't — shaded grey — here.)

Watching the show again is something of a time warp, and not just because the transfers are so patchy, owing to the show's being shot on videotape rather than film (As WKRP in Cincinnati's creator and producer Hugh Wilson mentions on a bonus feature in the new box set, this decision was made largely because the music licenses lasted longer for shows recorded on tape). Nor is it because there are so many ill-advised and plain unfunny racial jokes aimed in the direction of black nighttime DJ Venus Flytrap (Tim Reid), typically from farm-reporting nebbish Les Nessman (Richard Sanders), or because some of the we're-all-family wrap-ups are so mawkish you have to skip over them.

A lot of it has to do with the music being played — or more to the point, with the way the music is played. On the show, WKRP is a "rock and roll station" — an important fudge, because by 1978, there was no such thing anymore as one kind of rock and roll station. Around the turn of the '70s, the Arbitron ratings book had become the industry's standard, usurping earlier audience-recording methods by dint of containing "information that was more accurate and more specifically broken out," as Ken Barnes wrote in the Dave Marsh-edited anthology The First Rock & Roll Confidential Report (1985). "Demographics became a buzzword — total audience share 12+ was no longer the only consideration that counted." In other words, instead of having the most listeners over age twelve ("12+"), period, Arbitron broke the audience down further by sex and age group. This allowed stations to target their programming to appeal to specific audience bases — and even more importantly, compete for advertisers aiming for the biggest spenders (typically adults age 25 to 49).

Just as decisively, in the mid-'60s, the FCC ruled that large-market (populations over 100,000) "combo stations" that aired on both FM and AM could no longer simulcast more than half of their programming. Additionally, FM broadcast in stereo rather AM's mono — perfect for adventurous late-'60s rock. In 1967, the first two commercial freeform stations appeared, New York's WOR and San Francisco's KMPX — the latter featuring DJ Don Sturdy, who under his birth name, Howard Hesseman, would play WKRP morning man Dr. Johnny Fever (and ad lib many of the character's song intros). Freeform allowed its DJs to play whatever they wanted — including entire LP sides — rather than hew to the tight playlists of the Top 40 format. "No jingles, no talkovers, no time and temp, no pop singles," went KMPX's slogan. 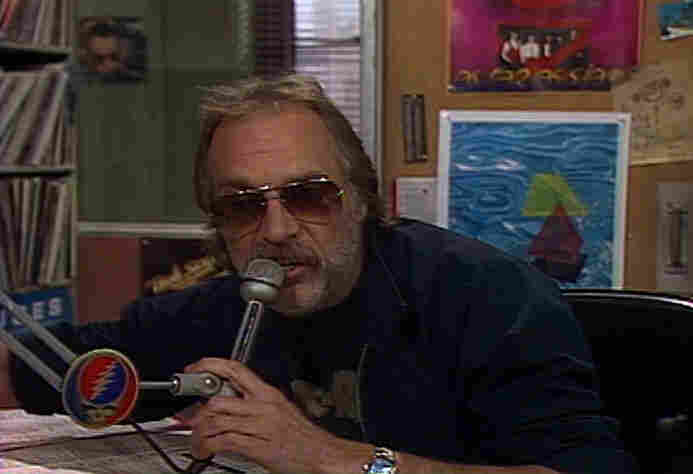 In the '70s, freeform solidified into AOR (album-oriented rock) — just one of a dizzying array of formats intended to satisfy every slice of the demographic pie. All those targeted audience shares had also crowded out rock radio's essential building block, the broad-based Top 40 format, which wouldn't stage a true comeback — as CHR (Contemporary Hits Radio) — until the mid-'80s, after the show was finished. On the show, Dr. Johnny Fever played high energy rock and soul, eclectic and freeform, while Venus Flytrap typically spun mellow R&B and jazz. By the time WKRP in Cincinnati hit the air, freeform didn't really exist in the commercial realm at all, and AOR was almost empty of black music. Calling WKRP simply a "rock and roll station" gave the show license for those two very different format styles to coexist without any seeming incongruity. (Putting WKRP on the AM dial — by that point no longer the place for just about any music station — helped the illusion.)

Nobody expected high realism from a network sitcom, but producer Hugh Wilson had sold advertising on an Atlanta Top 40 station before moving into television, and beyond basing several plots on true stories from his time in the trenches (most famously "Turkeys Away," from season one, in which the station foolishly drops live turkeys on a parking-lot crowd from a helicopter), he insisted on a surprising amount of truthfulness about the way the radio biz worked.

By the second season, Travis is testily insisting that Fever "play the hits," a refrain that lasted the rest of the series' run. In season four's "The Consultant," a slick programming expert scoffs at Fever's unreconstructed freeform DJ style, telling Travis, "He's stuck in 1962 ... Your format is all over the road ... Nobody is programming their own music anymore." Even Travis's moldy speech at the end of season one's "Hoodlum Rock," about a fictional British band, Scum (played by the real group Detective, featuring Michael Des Barres), who are allegedly punk but sounds like Foreigner, complete with cornball saxophone break, features Travis musing, "Whatever happened to groups like Crosby, Stills & Nash, or Chicago?" in precisely the way a rock-radio lifer of the time would have done. On multiple episodes, the station's staff fights to get their hands on the Arbitron book.

"Johnny Comes Back," another first-season episode, tackles payola — a new WKRP DJ is found out after taking a cocaine payoff from a label rep. (Fever, who figures it out, tells the station's well-meaning dumbbell boss, Arthur Carlson — Gordon Jump — that it's "foot powder"; naturally, Carlson uses it for just that. "I've lost all feeling in my foot," he yelps. "I've got a monkey on my foot.") "In Concert," from season two, handles a real-life incident — The Who's Riverfront Stadium concert on December 3, 1979, in which the crowd, most of which had general-admission, "festival seating" tickets, rushed in the doors, with 11 fans dying in the crush — with real gravity; it's one of the series' finest episodes.

While WKRP in Cincinnati's breakout star was Loni Anderson, as station receptionist Jennifer Marlowe, a blonde bombshell who's also the smartest person in the room, Dr. Johnny Fever is the show's most resonant character, particularly at a remove of 35 years. Hesseman's walrus mustache, motorcycle shades, and is-he-or-isn't-he-stoned? demeanor made him prime time's first full-on Sixties burnout. (Meathead was a grad student.) Moreover, Fever's hippie-era idealism is seldom the butt of the joke. In "Pills," from season four, the station takes, then refuses advertising from a sleazy seller of diet pills — over-the-counter amphetamines, as Fever gleans from the wording of his spot — with Fever noting, "I thought since the Republicans took office everyone just took downers."

Unlike many DJs from that era, Fever played punk as well as rock and soul; the range of music on the show gave this fictional radio station a better playlist than most of the era's real ones. But although the show helped break Blondie's "Heart of Glass" big, the exception, in Fever's case, was disco. "I asked him to play one disco record and he threatened to throw himself in front of Donna Summer's tour bus," Travis complains in "Baby, If You've Ever Wondered," from season two. In "Dr. Fever and Mr. Hyde," from season three, Johnny, tapped to host a disco TV show, transforms into Rip Tide, a cynical sequin-suited schmoozer and the virtual double of the radio station's smarmy ad salesman, Herb Tarlek (Frank Bonner). This, too, was relatively realistic, even if today it seems less than resonant. But who expects perfect foresight from a time capsule?