Accessibility links
Just The Hits: A Top 10 Of Top 40 For 2014 : The Record Dig below the strata of pop songs so ubiquitous you can't stand to hear them anymore, and you'll find plenty of riches in the Top 40, from country crossover to innovative R&B and classic pop. 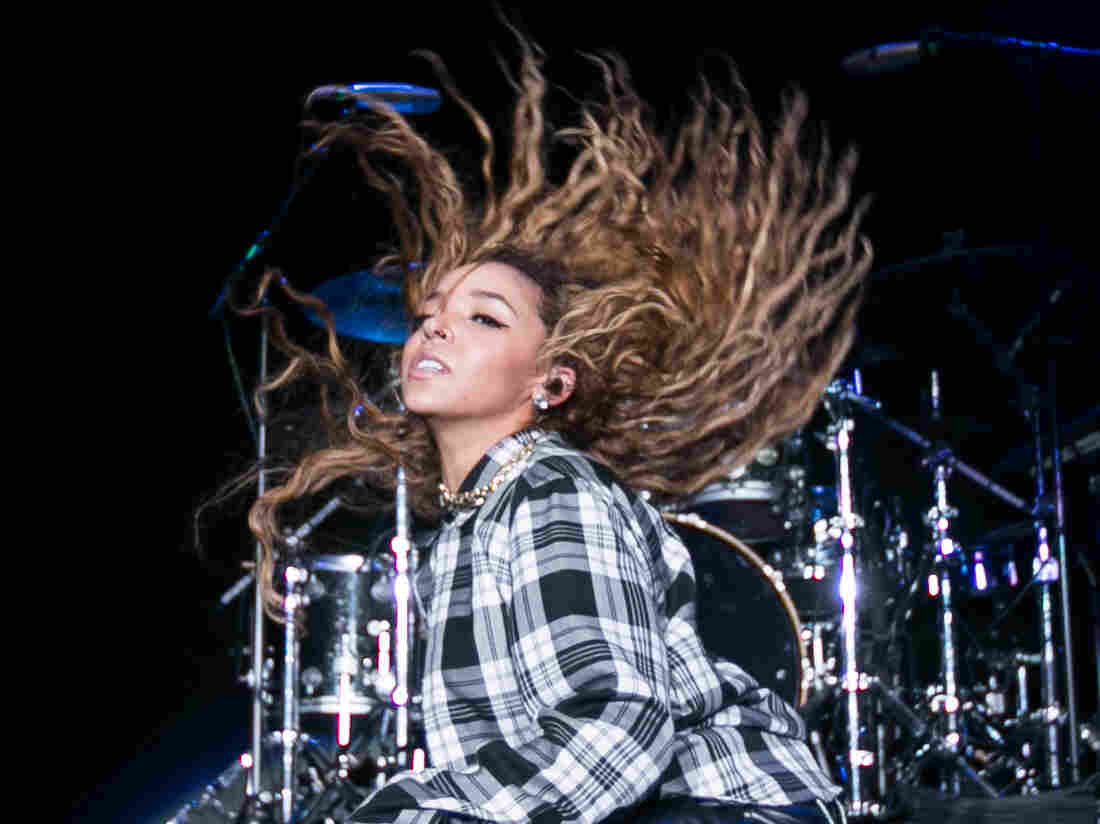 Tinashe, whose hit "2 On" was produced by DJ Mustard, performs on stage in December. Emmerson/Corbis hide caption Tinashe, whose hit "2 On" was produced by DJ Mustard, performs on stage in December.

As we wind our way toward the second half of the century's second decade, the American Top 40 is in radical flux. This isn't because pop is becoming any more or less innovative; rather, it's the counting, the data analysis that determines what stands as our most popular music that's changed. Radio is only one factor now, and record stores, which for decades moved the physical product that carried beloved music into people's homes, cars and headphones, now hang on valiantly but tenuously to their corner of influence. Even online purchases mostly involve the transmission of zeroes and ones instead of platters and cassettes. Pop's nature is even more radically affected by two central activities — streaming and sharing — that take fans' ownership completely out of the equation. That private process of plunking a discrete data storage format into a device to make it speak dreams and shape one's musical experience is mostly over, replaced by listening while Tweeting, making parody and tribute videos, and creating playlists with names like "Your Favorite Coffeehouse" and "Cardio."

So what has that done to music that's always been defined by sharing, the mainstream hits that come to stand for every year's zeitgeist? Commenting in this winter's Slate Music Club (to which I also belong), charts guru and frequent NPR Music contributor Chris Molanphy noted that while a conventional, radio-oriented reading might lead commentators to despair at increasing consolidation, in fact what's emerging through YouTube and Spotify is glorious variety. He focused on 2014's most discussed chart-toppers — the booty-shakers and girl-gang anthems and Taylor Swift juggernauts that not only rule the radio, but also generate endless online analysis. The list below shores up his point by doing something different: showing how the variety he celebrates played out not only in this small list of No. 1's, but throughout the year-end Hot 100 chart this year.

As in previous years, I followed some rules to create the Top 10 Top 40. All of the songs included (with one exception that proves some things) were issued as singles in 2014, though some appeared on albums earlier than that. None have been featured as part of NPR Music's other year-end lists (which, this year, narrowed the field, since our fantabulous Songs App tripled the number of faves we featured and allowed for more mainstream delicacies.) Neither did I focus on the hot-button numbers endlessly shaken, fancied and dissected from the bottom to the top in online think pieces. So much focus on a small number of provocations almost takes them out of the realm of music, into multimedia (I'm looking at you, "Anaconda"), and I'm interested in the ordinary: the stuff people gravitate toward not because they need to have an opinion about it, but because, you know, they actually like to listen, dance and sing along to it. And maybe make a Vine out of it. Because more than ever before, pop belongs to the people, and they're reinventing it every day.

The point of the self-titled album (call it a mistresspiece) that includes this February single was to produce a portrait of Beyonce's fantasy life that shored up her power in the real world. No song does it better than this one. Timbaland's finger-snap beats create high suspense as 'Yonce plays herself, in a limo with her husband: getting unbuttoned, worrying that the paparazzi will see them, unable to stop. Talking dirty, breathing in hip-hop rhythms, the Queen in disarray shows off her most potent superpower: an eroticism that's fully embodied and thrillingly believable.

Boy bands are keeping classic rock and soul alive in 2014, at least in the mainstream. Following up on the power-pop stylings of One Direction and the pop-punk of Five Seconds of Summer, this completely adorable tribute to R&B's great lovemen ("I wanna do you like Michael, I wanna kiss you like Prince/Let's get it on like Marvin Gaye, like Hathaway") mixes up the keyboard line from the Jackson 5's "I Want You Back" with some Powerade and the hormonal pleas of former TeenNick stars Tony Oller and Malcolm Kelley. Kelley even raps in his feckless British-diaspora accent about how his girl reminds him of Audrey Hepburn. Classy.

Making R&B for the 21st-century club is a balancing act, and nobody walks the tightrope as cleanly and gracefully as DJ Mustard. The LA producer, who produced more than a dozen charting singles this year, devises pure and simple beats inspired by house music, electronica and the southern strip club seductions that gave current hip hop its sinewy core. In veteran bedroom martial artist Trey Songz, Mustard finds a collaborator who's expert at making a chorus simmer. Borrowing its hook from the most insouciant hip hop song of the '90s — the Fugees' "Fu-Gee-La" — this humid dance-floor come-on is as orgiastic as minimalist pop gets.

The platinum bosses of contemporary country obliterate the bros with a party anthem that borrows its beat from Joan Jett's "I Love Rock and Roll" and its background vocals from the Merry Clayton-era Rolling Stones. One's running from the altar, the other's looking for trouble; they end up in New Orleans (of course), "just like a real life Thelma and Louise." Meant to be played in arenas, this good-time tale is a power play that's all about big lungs, smarts and sass.

The young R&B innovator (and former teen sitcom star) Tinashe has said that she only listened to Janet and Michael Jackson while making her intoxicating debut album Aquarius, and you can hear the influence in this breakout single: Restrained and perfectly calibrated, her vocal turns a call to party into a siren song. The ubiquitous DJ Mustard achieves maybe his crowning glory swathing her slender swagger in electronic silks. Getting tipsy never sounded this cosmically fulfilling.

Rixton, 'Me And My Broken Heart'

A wide swath of the Top 40 belongs to footloose singer-songwriters who effortlessly blend elements of reggae, soul, folk and rock into confections that would taste great sipped on a beach. This song by the boyish English band led by actor Jake Roche interpolates a song by one of those guys, Matchbox Twenty's Rob Thomas, and cops the style of another, Maroon 5's Adam Levine. But it's the slightly unhinged edge in Roche's voice that makes this plea to an elusive lover its own thing. Call it Rob Pattinson pop: dirty blond and just brooding enough to intrigue.

Someday everything on the radio will be in Spanglish. It's likely, anyway: A quarter of America's young people are Latino, and they're reinventing bilingualism from Los Angeles to Miami to New York. For now, we have Enrique Iglesias, the biggest male Latin crossover pop star of his generation. He's doing a bang-up job of blending influences on the many songs he brings to the charts. This one touches down in Cuba — a particularly cogent choice in 2014, it turns out — with features from veteran jazzman Descemer Bueno and reggaeton star Gente de Zona. Jamaican toaster Sean Paul joins in the diasporic fun, because when the party's on, it's one world.

Sam Hunt, 'Leave The Night On'

Some country purists really hate Sam Hunt, but simply put, he's the future. It's not new to blend country and hip-hop, but the way this Alabama jock-turned Nashville songwriter does it isn't confrontational in that hicks-in-the-sticks way Colt Ford and Brantley Gilbert have perfected. It just feels right. Soulful and gently persuasive when it comes to the ladies, Hunt can get away with phrases like, "it's early out in Cali, baby, don't you wanna rally" because he's clearly spent time with Dr. Dre's classics; the fact that this song also name-drops Train just shows that he's dead-set on topping the charts. And he's doing it. The multiracial, urban South: What a concept. Let's say yes to it.

In the hip-hop era, artists honor the past by holding it in their hands and reshaping it. Some go for nostalgic re-creations. Others cherry-pick elements in settings that make them almost unrecognizable. Only rarely do the students learning from a masterful source reveal exactly how that inspiration made them who they are. The producer Timbaland and his male muse Justin Timberlake manage this in their reworking of a demo recorded by their mutual idol, Michael Jackson, in 1983. Unlike so many hologram evocations of lost stars, this one feels like a real dialogue, though its mutuality is only imagined.

John Legend, 'All Of Me'

This last favorite from 2014 breaks the Top 10 Top 40's rules in an exemplary way. "All of Me" was actually released as a single in 2013, culled from reliable soul balladeer John Legend's fine album Love in the Future. It took the nation in its velvet grip over time; first charting last fall, then winning more hearts when Legend gave a stately, impassioned performance of it at this year's Grammy Awards. After that, well, it's with us now, the way so many songs that speak of the personal in elegant universals can be. Written for his own bride, Chrissy Teigen, "All of Me" is the perfect wedding song for the couples-therapy age, making room for nasty fights and irritating edges within monogamy's dream of "perfect imperfection." The way it crept up on us, as do so many hits now — hanging around, insinuating themselves, becoming indispensable — says something about listener loyalty in our age of supposed instant obsolescence. We still want some things to last; even some pop songs get under our skin and stay there.