Accessibility links
Bjork's 'Vulnicura': An Inquiry Into Melodrama : The Record If its songs demand that the listener get uncomfortably close to the viscera of romantic experience, they do so the better to expose how humans move through pain and finally justify leaving it behind. 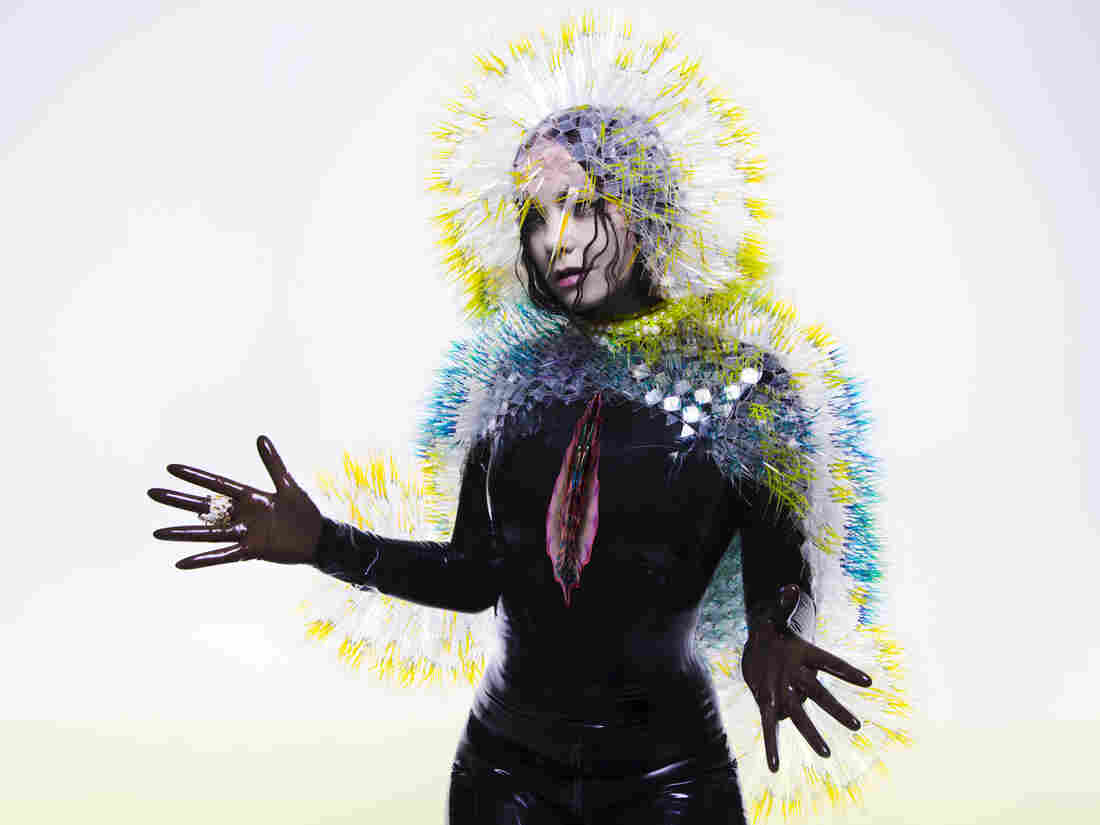 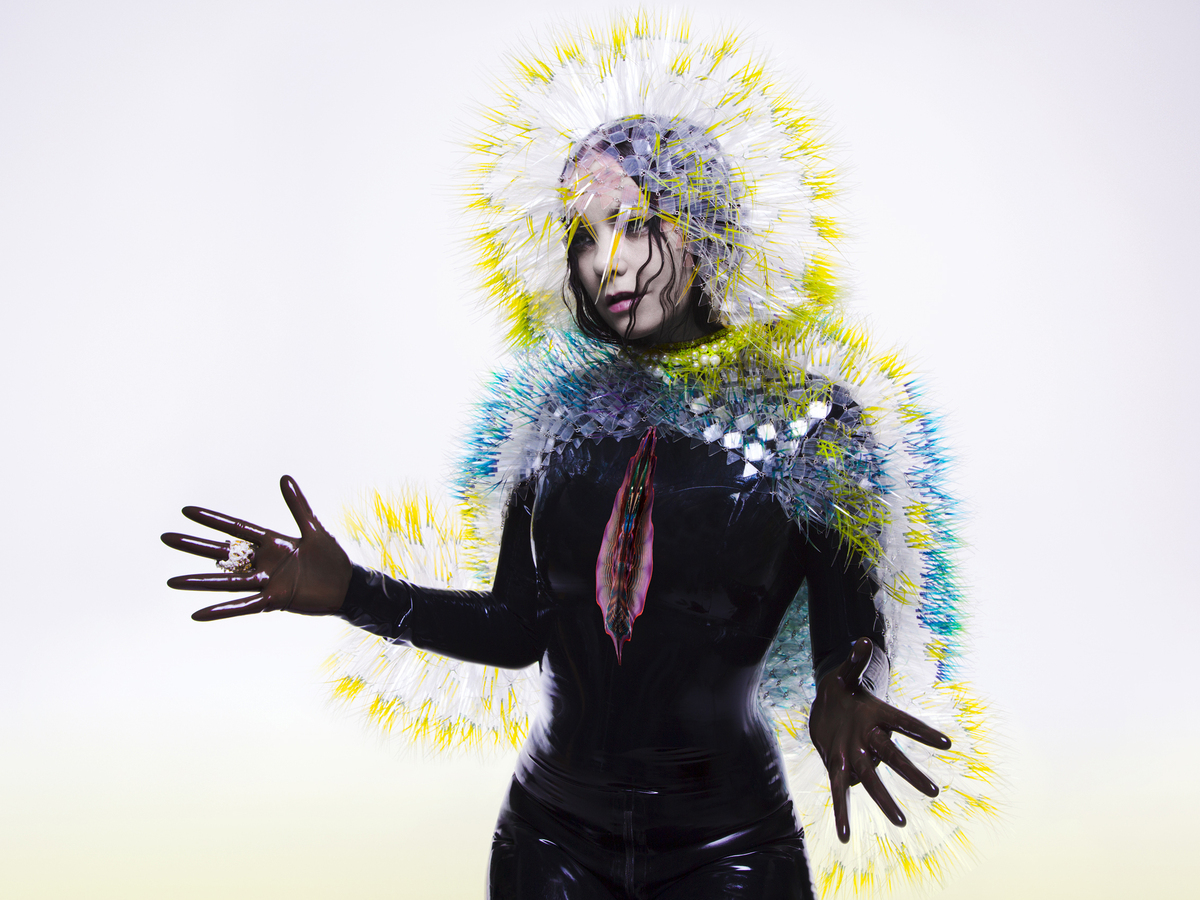 Courtesy of Sacks and Co.

What the Icelandic art star Bjork has accomplished at the intersection of pop and the avant-garde cannot be summed up in one detail, but one thing to focus on is the way she sings the word "emotional." Climbing it like one of the cliffs she often evokes in her pastoral lyrics, she lets it open up like a vista on its central, circulatory "o." The word becomes a Valkyrie's cry, a statement of purpose both sacred and humanly thrilling.

Recalling the way she deployed it in her landmark 1997 hit "Joga," Bjork wails "emotional" in the very first chorus on Vulnicura, the "heartbreak album" she has just released, which offers a needed model for heart-baring (and bearing) in this cool, fiber-optic age. On "Stonemilker," Bjork pairs the word with "respect" — she demands it from a lover who's switched the "off" button on their connection. Strings and beats swirl together, supporting her, the language of conventional romance combining with strangely intimate electronics that remind the listener of medical monitoring machines — or of heartbeats, even stomach rumbles, themselves.

Marked in the liner notes as the preface to the love-lost story Vulnicura tells, "Stonemilker" establishes the balance Bjork characteristically seeks: between sentiment and science, an immersion in feeling and its familiar social markers and an analytical take on just those things. Vulnicura brashly reveals the most intimate and sometimes embarrassing expressions of pain a lover makes when abandoned. But in its elegant, slow unfolding, it also creates a space to observe those outbursts and recoveries. This album is an inquiry into melodrama, and if its songs demand that the listener get uncomfortably close to the viscera of that romantic experience, they do so the better to expose how humans move through pain and finally justify leaving it behind.

Melodrama is a feminine form, the designated space where domestic and erotic stories can turn grandly operatic. We associate it with bodice-ripper novels and Technicolor movies in which beauties wear their anguish openly, without shame; overwrought stories, maybe, but ones that have always filled in the gaps between relentlessly macho tales of crime, politics and war. In recent years, women artists and some empathetic men have reclaimed melodrama in ways that make it both more introspective and more clearly critical of the gender divisions that required its existence in the first place. The film collaborations of Todd Haynes and Julianne Moore, Tilda Swinton's extraordinary performance in I Am Love; Lydia Davis's novel The End of the Story and Jenny Offill's more recent Dept. of Speculation: these are the works that form a frame around Vulnicura, reminding us that this is not just a raw reflection of Bjork's breakup with her fellow fabulist Matthew Barney, but an intellectually ambitious intervention into melodrama itself.

In Bjork's hands, melodrama becomes an avenue of self-reflection. Her co-producer Arca proves an ideal partner; having previously shown his sensitivity toward highly idiosyncratic vocalists working with Kanye West and FKA Twigs, he merges his own slyly organic, determinedly fluid sound with the one she's perfected using guts and intellect, and it's a beautifully easy collaboration. The Venezuelan-born Alejandro Ghersi, who is 24, grew up on Bjork's work, and his own albums connect hip-hop to experimental electronica in ways that mirror the pioneering efforts that made her a star. Arca honors Bjork's excavation of her past and her almost obsessive examination of the state in which her and Barney's breakup left her. Vulnicura abounds with references to her previous songs, showing how the psychic unraveling heartache causes is tied up in memory, and how one way ex-lovers recover is by reclaiming their individual pasts. It surveys and carefully accesses the range of emotions abandonment inspires — "define her abyss, show it respect" she sings on the slippery "Quicksand" — but boldly moves on, outlining a plan for healing. The album's mostly gentle pace and sonic spaciousness — unlike her previous work, Biophilia, this one never feels busy — demand attentiveness.

"Black Lake," Vulnicura's centerpiece, unfolds like an aria — the designated space within classical music where a woman can reveal how men have betrayed her, both intimately and within society. Because this is Bjork, however, instead of employing coloratura cries, she shares her tragedy in calm but mounting phrases that reflect both folk balladry and torch songs. In spare couplets gradually pushed forward by Arca's biological beats, she reveals first her own pain, then the way her lover created it through betrayal, which Bjork defines as a hollowing of the heart. Bjork's Icelandic accent becomes stronger as she moves toward the story; reclaiming her native tongue, she returns to herself. But she also knows part of herself has burned away; the last image in this blend of the natural and the mechanical is of her becoming "a glowing, shining rocket," returning to the atmosphere of herself. "I burn off layer by layer," she confesses as the strings cool the mood, pooling mourning around her.

Ten minutes long, "Black Lake" both clarifies the story told on Vulnicura and serves as a statement of purpose. Bjork has said that she hopes these songs provide insight into how heartbreak affects the body: "the wound and the healing of the wound." Allaying any doubts about this injury's gender, the album cover depicts Bjork as a futuristic, flower-like creature with an open chest that resembles a detail from a Judy Chicago plate. For Bjork (who has an adult son and a young daughter) heart and the womb are inseparable, and one thing that makes Vulnicura distinctive is her attention to how broken romance reverberates beyond the couple. The quiet but ferocious "Family," co-produced by electronica's 27-year-old horror master The Haxan Cloak, begins with a summoning tympani-style beat as Bjork, vengeful as a mother's ghost, cries out about "the death of my family." By song's end, she has turned toward her daughter, determined to build a bridge beyond the split earth. Her own overdubbed voice forms that bridge, intertwining with the violins she often employs as harmonic partners. "There is a swarm of sound around our heads," she sings: it's sound that she herself generates, as women in melodrama often do, speaking truths that both expose and begin to reassemble what has been broken.

If Vulnicura has a flaw, it's in the way the lyrics sometimes read on the page. Melodrama risks extreme feeling, and that means embracing florid phrases. In "Atom Dance," the dizzying duet with frequent collaborator Antony Hegarty that signals the damaged lover's return to wholeness through compassion, she declares, "I am finetuning my soul to the universal wavelength" — this is the hippie side of Bjork that makes it hard for some cynics to take her seriously. But the weblike arrangement that Arca and Bjork create, which the singers make richer by merging their voices in self-dissolving harmony, proves her point. This music sounds like the abandonment of ego — not conventional melodrama's self-sacrifice, but something more spiritual and sublime. It is Bjork's way out, and back into, human feeling.

In the end, Vulnicura plays out its tragedy and pushes beyond its boundaries. "Quicksand" spins beyond the album's frame on a drum and bass beat and the staccato push of a wordless female voice. "Our mother's philosophy, it feels like quicksand," Bjork snappily intones. She reflects upon the isolation of the abandoned woman and opts for something different for herself and her daughter: she turns the solitary "she is broken" of femininity's history into a loving "we," an invocation of the animist universalism she's espoused in songs ranging from "Isobel" to "Pagan Poetry" to the entire Biophilia project. "When we're broken we are whole," she sings, at home in the swirl. She calls for hope, not just for herself, but also for "my continuity, and my daughter's, and her daughter's, and her daughter's." The track abruptly cuts off, suggesting that this reclamation of the feminine heart is unfinished business. But that hope resonates. This sad story extends beyond itself, opening into something new.