Accessibility links
Waka Flocka Flame Is Hiring : The Record The rapper isn't using a headhunter. He's interviewing applicants for the position of fulltime blunt roller himself. 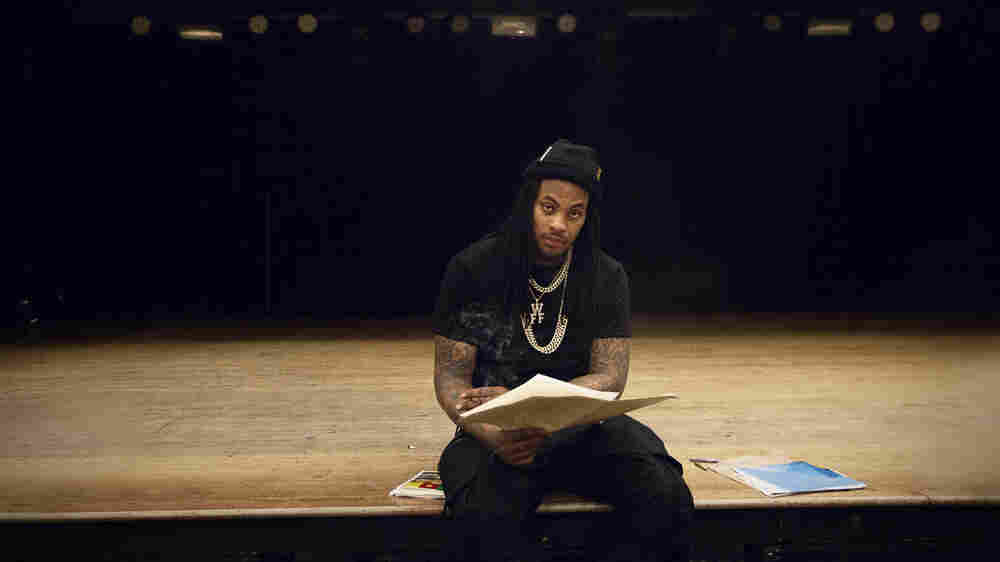 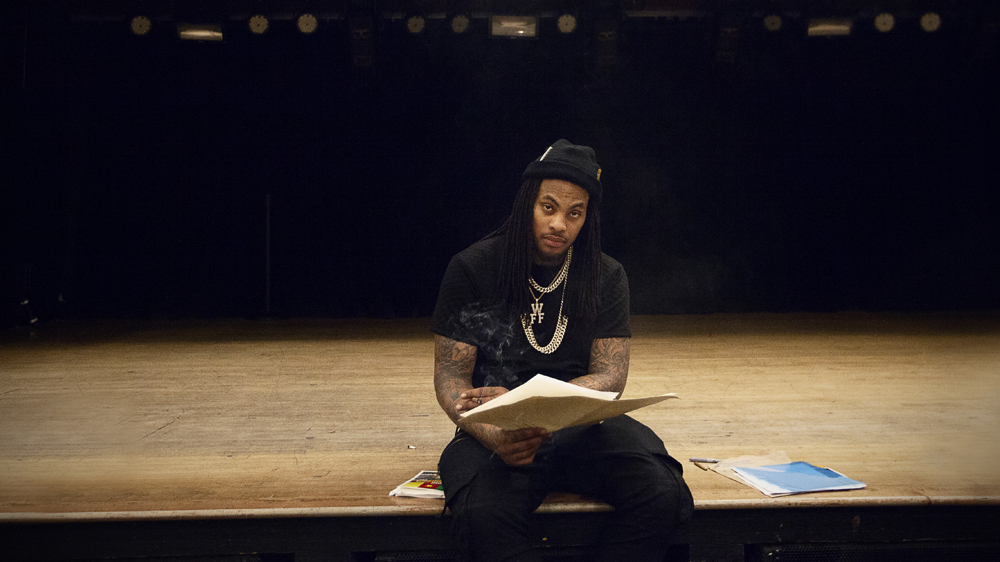 They say you can't overestimate the power of a good handshake. If that's the case, my job interview with Waka Flocka Flame was doomed from the start.

I went in for the sort of greeting I'm familiar with -– a clasp that pivots up into a grip and pulls in for a hug — but it unexpectedly continued. He raised our wrists to shoulder level, pointed his fingers out, locked them with mine ... but by that point I was long since lost. He looked at me and smiled sympathetically. First impressions, I thought, resigned, are everything.

Months ago, I saw the VIP package deal for the New York City stop on Waka Flocka Flame's current tour: $75 to get backstage, a photo and a personal resume review. Now I was spending a couple hours watching my prospective employer feed everyone competing for the position — scores of qualified candidates — into a blender of impossibly high expectations. He not only had each applicant's resume read aloud to them, he made them demonstrate their skills on the spot, against the clock. He scrutinized each submission: Was it structured soundly? Was it pleasing to the eye? Was it functional, did it pack a punch? Most importantly: Could it get him and all his friends really high?

Waka Flocka Flame is hiring a professional blunt roller, and he is not f---ing around.

Flocka became one of the biggest rappers in the world in 2010 with the release of Flockaveli, an album of monstrous, anthemic beats and endlessly-quotable lyrics. "I rap hook to hook," he said in 2012. "If I don't feel it, I can't talk about it." You could extend this sentiment to almost everything he does; he wants to connect person-to-person just as much.

This is why Flocka isn't using a headhunter. He's willing to review hundreds of resumes himself and eventually pay $50,000 a year to someone tasked with following him everywhere and producing the perfect blunt on command. The fans in the line that coiled through the basement of New York City's Webster Hall hours before his sold-out show are there for the story, yes, but they also want a job that honors their particular expertise. Don't we all?

Waka Flocka Flame has been trying to hire for the position since September, 2014. It was a year before that, when he was on the road in Europe for six months, that he realized he needed professional assistance. "How polished is it if you wake up in the morning, you've got like five rolled, with breakfast right there?" he asks me. "I can't see nothing more beautiful except waking up next to your wife and your daughter." The job, as he imagines it, will require travel and flexibility. "I don't smoke a lot no more every day," he said, three joints splayed out before him. "I might not smoke a blunt for two days, three days. But then one day you might run through 100 blunts. You might end up rolling up a quarter pound. I'm talking about finger cramps."

A demanding gig, no doubt. But worth it if you consider the spoils. The salary, the free weed and the prestige of having out-twisted the competition to be America's foremost weed craftsman aside, let's say you're one of these humble stoners. Years of smoking under your belt. Deceptions on deceptions on deceptions, plus some white lies, hiding your habit from your family, your employer, society. And all the while, alone and in private gatherings with friends or at concerts, you hone your craft. And now, thanks to an enterprising rapper, champion of your cause, you might emerge from the shadows. Validation.

But in the end, it's all about the blunt. In its platonic form it's as long and wide as a man's middle finger, but conical and smooth. Tightly packed and sturdy enough to bounce when thrown on a table without splitting and spilling its guts. This skill, galvanized in the pressure cooker of illicit fetish, is what Flocka is looking for. "Everybody thinks I'm playing," he told me between applicants. "But I'm so serious." 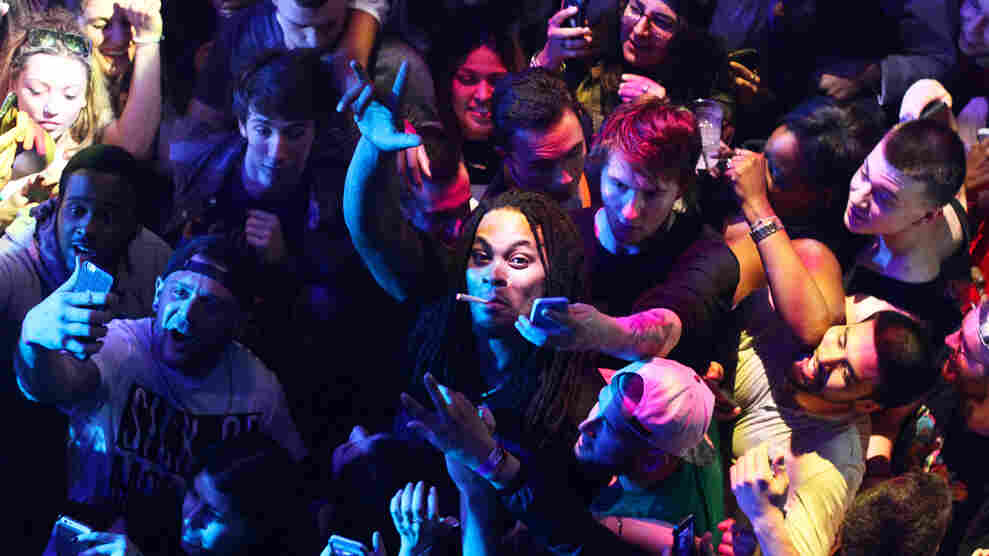 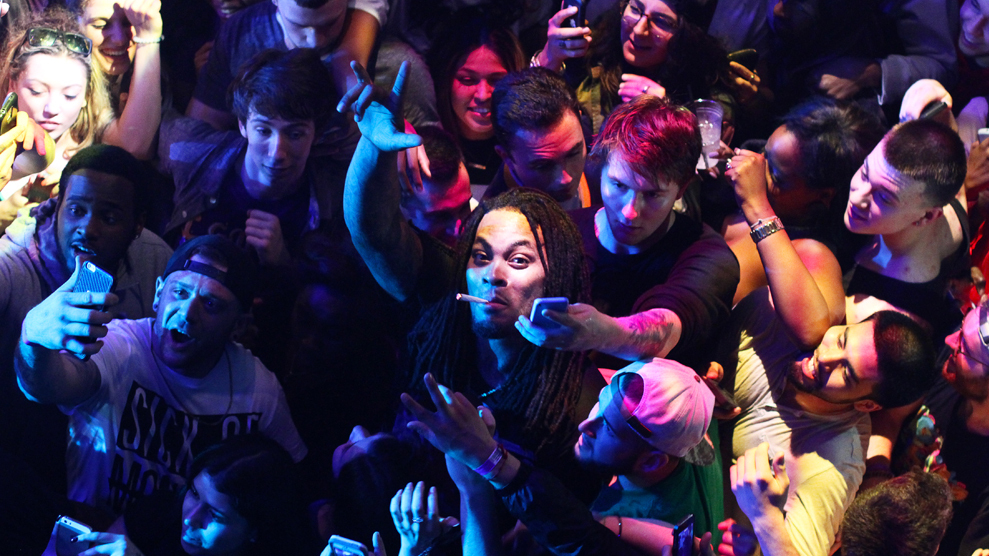 Waka Flocka Fame amid the crowd at Webster Hall in New York City on April 20.

If there ever were a time to find this talent, it was that night: 4/20, the pothead's Christmas. Maybe they were in that very room. After some very presidential grip-and-grabs, Flocka, along with his two openers, Azizi Gibson and Ben G, took his place behind a desk to find out.

They sit three across like American Idol judges to receive their first applicant, a skinny kid named Cody Watson. He came prepared. With a gold watch on his wrist, he opens a three-ring binder to begin a business school pitch comp-level presentation. First, the products. He presents three breeds: "studio," "squad," and "stage," fine-tuned in weight, mixture and roll to suit each circumstance. It's as close as you can get to "try-before-you-buy" without actually toking up. He displays some certification he got in California. The judges are impressed and take his number down.

The next guy is less concerned with politesse. He didn't bring a resume, but he isn't empty-handed. He whips out rolling papers and a bag of weed and starts rolling. The idea might be ballsy, but he's not. His hands are shaking, sweat filming his forehead. Flocka imagines a scenario to put him in the pressure cooker. "There's a $10 million deal on the line," he says. "Can you perform?" How the blunt helps in that scenario is unclear, but irrelevant: the kid is quivering so badly that ground up weed is spilling on the interview desk. He finally wraps up a conical joint, with the clock ticking to zero. Flocka examines it. "It's a little lumpy," he says, dismissing him. "We're gonna call you 'Shakes.' "

Next up is JP. He's only got one tape on his phone, Flocka's new mixtape, Salute Me or Shoot Me V. He whips out a pathetically small joint. "This guy won't get his left ear high," Ben G scoffs, signaling the hook.

Candidates file in quickly and are dispatched just as fast. One shows up without weed, even though he claims he's been rolling since he was 10. He's denied, but hands Flocka a free pair of Capri-cut sweatpants, which may have been his original intent, before walking out. The next, in skintight weed leaf jeans, offers a tiny blunt, which is derisively deemed a "mosquito head" and swiftly rejected.

Another guy named Cody shows up. He is empty-handed.

"I don't really roll blunts, but I can learn," he Hail Marys.

He gets a long stare.

His look of bafflement irritates Waka. He's been very clear. This is not a joke. "Can you handle drinking every night? Smoking blunts? If you wake up hungover, you're fired!"

Another candidate claims she was frisked at the door. "If you can't smuggle dope into the building, how will you conceal it from the police?" Amateurs.

Now he has getting pulled over on his mind. "We're all on the bus, we've got three ounces of weed. What do we do?" Flocka grills Nikita and Scott, artisans who made it to a second round of questioning. "Throw it out the window?" Nikita offers. Flocka covers his face. "Not the best answer."

The line dwindles as Flocka cheerfully obliges pictures and handshakes from those not interviewing, autographs paraphernalia and vetoes joints extracted from socks and bras. An older Irish woman asks him to sign some posters. A Cameroonian man blesses him with a shaman's stick and passes forward a travel guide to his country. Flocka must be five joints deep now, but he's still kissing babies, as it were.

Having watched Waka Flocka Flame's rigorous gauntlet leave only a few standing, I don't like my chances. I've got sweaty palms. Most of my experience with weed is secondhand. Worse, I've never rolled a blunt before. What am I doing here?

Flocka looks at me. "We've got a resume," he calls to Azizi and Ben G. The panel recites my cover letter. "You were the first person to bring a recommendation letter," Flocka says. "But you're not the first person to show up without a blunt. All of this has nothing to do with rolling marijuana." "So that's a no?" I ask, as if I didn't know the answer. "I think you're overqualified for the position," he notifies me, kindly. Another rejection on the road to perfection.

Flocka took the stage as I drowned my disappointment in a beer. The audience broke into a moshpit almost immediately. Bras flew onstage. His bouncers were throwing water bottles to the throng, and he made it three — maybe four — songs into his set before diving in with the crowd. On the balcony fans squeeze against the banister, and I watch through their phone screens as Flocka bounds into the pit in front of the stage and throws his body onto his people.

He's there with a blunt in his mouth as they lift him up, higher and higher, over the barrier. He's there, in the crowd now, tossed through strangers that turn to him like iron filings to a magnet. He's there, among his people, closer to them than to the show itself. They look to him, and he looks back.