Accessibility links
In Search Of Intensity, Musicians Turn To Adrian Utley : The Record The Bristol, U.K.-based producer and member of Portishead has become a go-to collaborator for dark, uncompromising rock, with credits on recent albums by Torres, Marianne Faithfull and Perfume Genius.

In Search Of Intensity, Musicians Turn To Adrian Utley

In Search Of Intensity, Musicians Turn To Adrian Utley 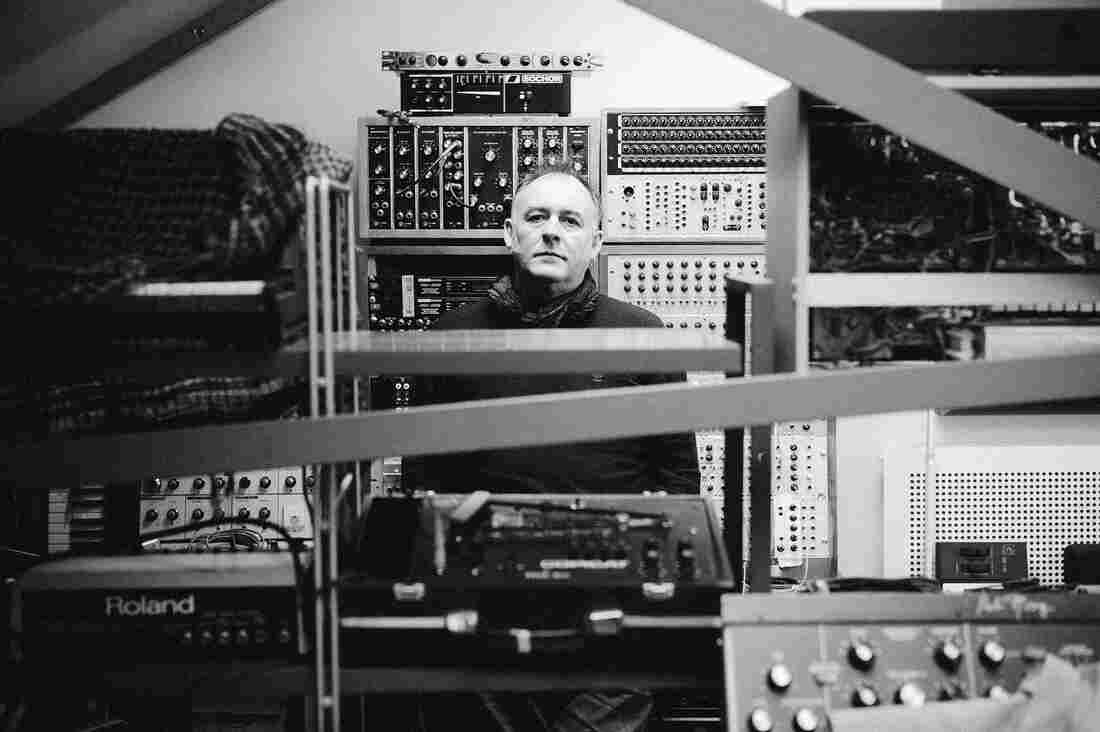 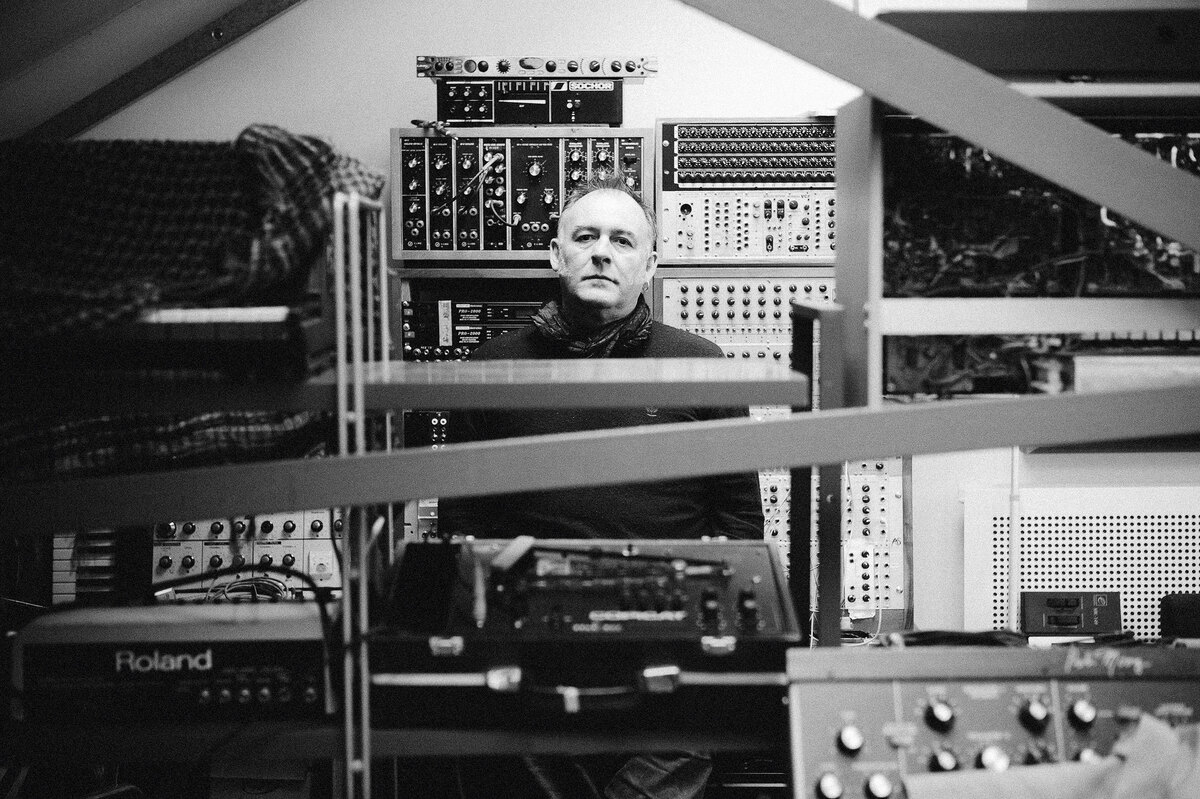 Musician and producer Adrian Utley in his studio in Bristol, U.K., in 2013.

Adrian Utley just broke his portable synthesizer, a Minimoog. Not on purpose; simply "because I used it," he jokes over the phone. Shattered strings and dilapidated drum kits aren't a predicament for the veteran British guitarist, producer and engineer, though. In fact, cronky and abandoned instruments are what one might call his zone. "All of the instruments I have, which are often old, make sounds that I think I like and are useful in the sound world I want to inhabit," he says. If it's broken, maybe don't fix it.

Since the early 1990s, Adrian Utley has specialized in extracting unprecedented sounds from storied instruments, both in his group Portishead and throughout dozens of collaborations. Well-documented praise has been lauded onto his Portishead compatriots; particularly to vocalist Beth Gibbons for her spine-lilting pipes and to multi-instrumentalist Geoff Barrow for his production work. Yet Utley is the dark horse of the enigmatic Bristol trio: It's his dense, unusual guitar work that provides the tense undercurrents central to Portishead's visceral, sweeping approach to music.

The versatility he brings to collaborations is singular, and perhaps even more expansive than what he contributes to Portishead. Utley's credits include thumping the bass for Marilyn Manson, composing tracks for Ginuwine and lending his rhythm guitar sensibilities for Jeff Beck, among many others. He's co-produced, engineered or played on some of the most critically acclaimed records of the last year: Marianne Faithfull's Give My Love to London, Perfume Genius's Too Bright and Torres' second album, Sprinter, which dropped May 4 on Partisan Records. Then there's the slew of ambitious personal projects, including a recent live recording of Terry Riley's minimalist composition In C, which boasts one clarinet and 18 guitars.

Utley's trajectory, fittingly, was bred from the seeds of experimentation. Born in Northampton, England, in 1957, the rabble-rouser was fed a steady diet of jazz standards, John Coltrane and Miles Davis and then some, by his father. At age 14 he picked up a guitar after being moved by his partner-in-crime and friend noodling about on one. "He showed me a couple of chords, and I swear to God I've never put down the guitar from that day," Utley recalls.

Utley was brought into the Portishead fold by his friend Barrow in 1994. Back then, he says, the young band was just "digging making sounds" and never expected its debut, Dummy, to have a hit, let alone become an instantaneous one that would help usher in trip-hop's widespread popularity. Since Portishead was far from financially sustainable back then, Utley was still relegated to doing studio session work with what he calls "s*** blues bands" to scrape by, living paycheck to paycheck just to buy breakfast for the gang.

Portishead has since recorded two studio albums after Dummy, Portishead (1997) and Third (2008). The trio has amassed a cult following, perhaps because these musicians — more than any of their contemporaries, such as Massive Attack — managed to mold a distinctive generational unsettlement and an outcast's feeling of rejection into something palatable. With Portishead, disillusion became something you could groove to, instead of a feeling you pushed away.

Many creative roads cross at Utley's personal studio in Bristol, where he collaborates with a revolving cast of musical luminaries, as well as old and new friends. The space boasts floor-to-ceiling windows and is an audiophiles' paradise, to put it lightly. Mackenzie Scott, the singer/songwriter of Torres, traveled there with Sprinter producer Rob Ellis for a day to have Utley play on four songs. Over coffee in Brooklyn, she gushes about Utley's "incredible" digs. "It's a playground, all of this analog [stuff] that isn't being made anymore," Scott says, adding that there must have been "hundreds of synthesizers" in the joint.

While Utley's primary instrument is guitar, he's admittedly a gear head. "You enter the world of these things," he says. "These are tools that extend your brain; you can think with them." But it's apparent that Utley might be fixated on the history of instruments for not just his benefit but that of his many collaborators.

Scott mentions Utley's generosity on various occasions. "It really seems like [recording is] a joy for him," she says. "I mean, he let us dick around on his synthesizers and guitars." By all accounts, Utley is quiet, contemplative, jovial and forever has his nose to the grindstone. "He works hard and he works beautifully," says British chanteuse Marianne Faithfull, who collaborated with Utley on her last album, 2014's Give My Love to London. "He's an inspiration to me, anyway. With Ade, I work harder too. And I'm not a hard worker. I am really, but I can be very lazy."

Like Scott, Faithfull met Utley through his old friend Ellis. Both played on her 2005 record Before the Poison, along with PJ Harvey. Back then Faithfull needed a guitarist, and trusting Ellis' recommendation, asked Utley to collaborate on it. "[Rob and Adrian] work awfully well together, you know, to the point where they hardly speak. And that's always a sign," she says over the phone, speaking from her Paris home. "There was no question that we wanted to try and get Adrian to play on Give My Love to London."

Seattle-based artist Mike Hadreas, known by the moniker Perfume Genius, says he had been a longtime fan of Utley's, but thought he was out of reach in terms of collaborating. While working with engineer Ali Chant on initial demos that would eventually become his shimmering 2014 album Too Bright, Chant mentioned that the mood of the then-forming album was ideal for Utley's shadowy, synth-heavy sensibilities.

He was right: Utley and Chant would end up co-producing the album, which was recorded at Toybox, Chant's central Bristol studio, and Utley's nearby haunt. Hadreas and Utley got on immediately, cosmically connecting over the "darker, crazier" parts of Too Bright. "We could be cracking jokes, then when it got time to make a song we didn't even have to shut the lights out for drama, we could just mentally go to that dark place very quickly," Hadreas says with a chuckle. "We'd be laughing, and then two seconds later he'd be playing a guitar with a rusty nail."

Utley was able to translate what Hadreas calls "hippie language feeling words" into concrete sounds. Similarly, Scott says she spoke with Utley about nebulous elements like color, atmosphere and texture while the pair were recording. Sprinter, which Ann Powers recently wrote, "turns songwriterly confession sacramental," was nearing the finish line when Utley got involved, and both Scott and Ellis thought it was missing a final touch of something. "We told [Ade] we wanted raindrops, just a bit of magic but f*** it up a little bit," she says. "And he just got it."

These days, Utley is hoping to embark on a period of classical composition study with an instructor, balancing a series of personal projects and (hopefully) slowly percolating Portishead's fourth album with his band mates. Surprisingly, Utley admits he's not very good at reaching out to other people for creative collaborations, although he can't resist a good project and "really enjoys working with other people."

Currently, he's calling from Chant's Toybox Studios, where he's recording an album with French vocalist Françoiz Breut. He's holding up the band and his phone, he warns, is about to go kaput. Yet he's polite and calm under distress, meticulously detailing what he finds so riveting about Bernard Herrmann's score for Martin Scorsese's Taxi Driver, and laughs when I ask if he ever finds time to sleep given his many projects (he does, he insists).

While he's undoubtedly a music veteran, Utley remains preternaturally curious and a tinkerer by design, speaking about music in terms of palates, vibes and terrains yet to be unearthed. He's a rare breed, a musician who finds the joy in understanding what it is about sound that sways us and how that can be created with all kinds of wacky instruments, swooning synthesizers and myriad voices in the studio. But according to Faithfull, Utley's dynamic in the studio is what makes him singular.

Speaking with her, along with Scott and Hadreas, it's apparent that Utley straddles an ideal position to be a world-class collaborator. On one hand, he's technically proficient as a producer and engineer, understanding the minutiae of a good record. But he's also keenly attuned to the more abstract emotive sensibilities that make music moving, and memorable. He mentions that he's been recently into fine-tuning his array of drum kits. Not because he's necessarily a good drummer, but because, as he says, "I'm really pleased with [something] other people can use."