Accessibility links
The Cruel Truth About Rock And Roll : The Record Recent allegations that one of The Runaways was raped by the band's manager remind us that sexual exploitation is part of rock's foundation — and challenge the very idea that it is worth loving. 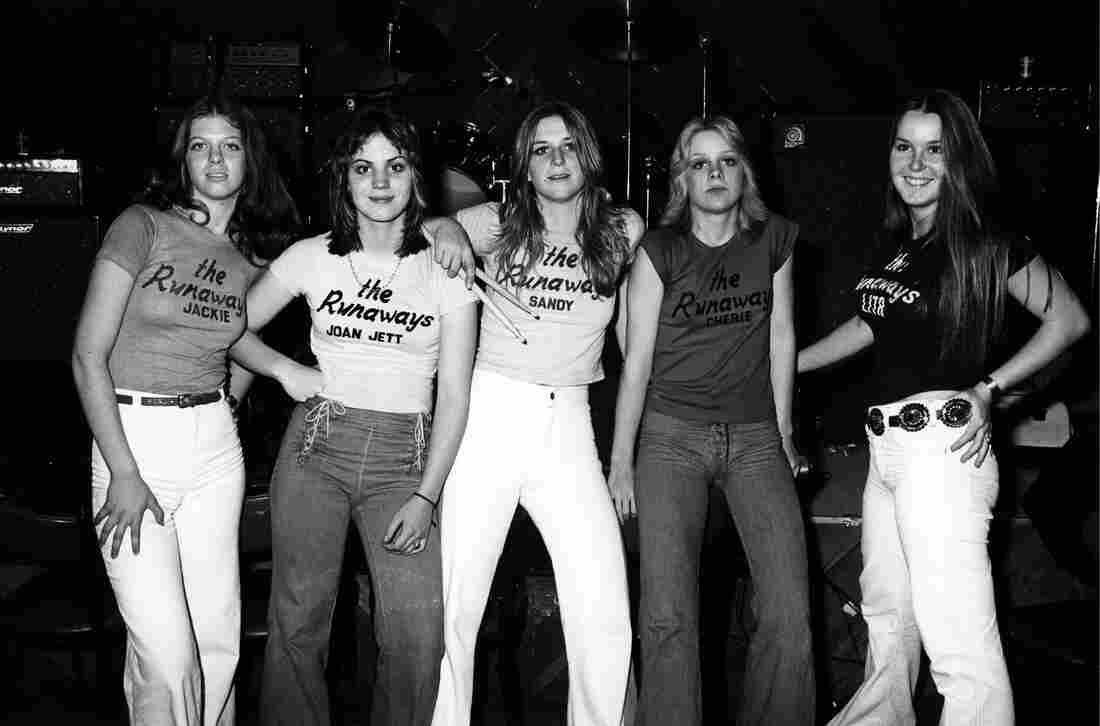 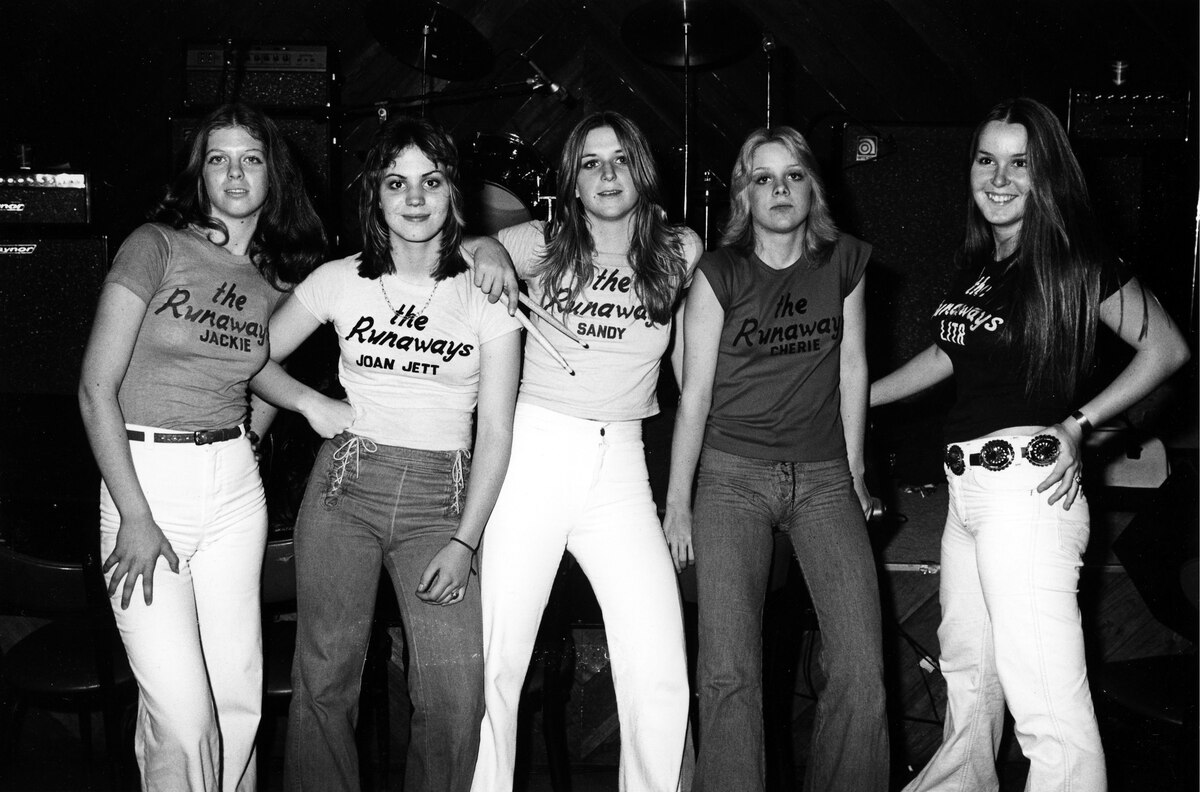 Last week, a story about The Runaways' Jackie Fuchs, centered around her account of being raped by the late music entrepreneur Kim Fowley in a motel room full of people on New Year's Eve in 1975, challenged the very idea that rock and roll is something worth loving. Fuchs' account hit the music world like a bomb that obliterated all taste of cherry from our mouths, demanding the acknowledgment of certain painful facts from anyone who loves 1970s pop culture, that groundbreaking all-female band in particular, or the romantic notion that music celebrating and enacting sexual openness is a force for freedom and empowerment. (Full disclosure: I'm one of those people.)

Like any secret laid bare after years of only furtive acknowledgment, this one has disrupted many lives and caused reactions ranging from rage to self-righteous moralizing to Fuchs' own remarkably generous forgiveness of those who knew something terrible had happened but didn't directly respond. (Here's a good, if incomplete, roundup of responses.) Fowley's reputation is now rightly destroyed. Other Runaways members and people involved with the band have come under fire and responded. (One of them, Runaways biographer Evelyn McDonnell, is my friend and longtime collaborator, and her comments have expanded the discussion in important ways.) As others shared crucial truths or pontificated, Fuchs herself, now a lawyer, employed her own great eloquence to call for the focus to remain on "holding rapists, abusers and bullies accountable." Several commenters have mentioned that the 1970s was a time when the exploitation of very young women was often in the media, citing the famous examples of the groupie milieu surrounding Led Zeppelin and the statutory rape case that exiled film director Roman Polanski from the U.S.

Here's the truth: The history of rock turns on moments in which women and young boys were exploited in myriad financial, emotional and sexual ways. This most sordid secret history lurks in the background, but it's not incidental: from the teen-scream 1950s onward, one of the music's fundamental functions has been to frame and express sexual feelings for and from the very young, and its culture has included real kids, the kind who feel free but remain very vulnerable, relating to older men whose glamour and influence encourages trust, not caution. The worst, weakest and most self-deluded of these men have stepped over moral lines, over and over again. It happened in the early 1960s, when, according to Patti LaBelle, her fellow soul great Jackie Wilson attempted to assault her — then a teenage member of the Bluebelles — backstage at a show. It's happening now, with 23-year-old Warped Tour performer Jake Mcelfresh (who performs as Front Porch Step) facing accusations of sending explicit texts to girls as young as 13.

Examined coldly, these cases really don't seem to inhabit a proverbial gray area. Men have behaved abhorrently toward young women whose only mistake was in assuming they'd be treated with respect. Yet the music itself, so redolent of pleasure, muddies peoples' responses. We want to enjoy it and to take its dares. And for young girls and boys, it does express real sexual feelings, often otherwise denied. The craving for that expression has led to a startling number of cases in which deeply inappropriate responses to it have been rationalized or simply overlooked.

Sometimes, as with the Fuchs story, useful public conversations do emerge in light of young people's exploitation. The trials of R. Kelly, who was eventually acquitted of crimes against several underage girls in Chicago, became a touchstone for those questioning the the enjoyment of explicit music and the celebration of its creators. And sometimes the men involved are so blatantly transgressive that they become pariahs: when 30-something metalhead Ted Nugent became the legal guardian of his teenage lover in the 1970s, all the while recording songs like "Jailbait," it added to his reputation as a truly unstable character.

But the many more examples of sexual encounters crossing over into criminality have made such behavior almost mundane. Start at rock's beginning, with a foursome of legends — Little Richard, Jerry Lee Lewis, Chuck Berry and Elvis Presley, all of whom had significant relationships with teenage girls while they were major celebrities in their 20s and, in Berry's case, 30s. This is the foundation of the music. It's no wonder that such troubles haunt it to this day.

In 1956, Little Richard looked out of a hotel window in Savannah, Ga., and spotted a 16-year-old named Audrey Robinson. He was 24. He pursued her and they became intimate, though not in the conventional way — according to Richard's autobiography, he liked to watch while she had sex with others. (Robinson has denied this.) Changing her name to Lee Angel, Robinson became a renowned exotic dancer, and she has stayed close to Richard into their old age. Was this a relationship between equals? It's hard to say. The same question has been asked of the most notorious sex scandal in early rock: In 1958, rockabilly pioneer Jerry Lee Lewis married his 13-year-old cousin, Myra Gale Brown; he was 22. Myra had the support of her family — her father sometimes played bass with Lewis — but years later, after the couple was divorced, she claimed that Lewis had abused her.

In 1959, Presley met 14-year-old Priscilla Beaulieu on a German army base and began dating her. He was 24. He moved her to Memphis when she was 17, but, perhaps frightened into waiting by the scandal afflicting Lewis after his marriage to Myra, waited to marry her until she was 21. That same year, Chuck Berry was arrested in St. Louis, Mo., for transporting a minor across state lines for "immoral purposes." The 14-year-old in question was a runaway named Janice Escalanti whom Berry met and wooed (according to her court testimony and accounts from other witnesses; he denies any intimacy) on the road. Berry was 33. His conviction and imprisonment demonstrates a racist double standard that put African-Americans behind bars while whites like Presley remained free. Yet this wasn't an isolated incident; the year before, he'd been arrested for gun possession in St. Charles, Mo., while in the company of his then-lover, Joan Mathis, who was 17.

All of these stories have become part of rock's lore, perhaps tainting the reputations of some of the music's greatest figures, but hardly sinking them. The notorious tales just keep rolling on. In 1966, Mick Jagger's girlfriend Marianne Faithfull was 20 and already a mother when police on a drug raid at Keith Richards' mansion found her wrapped in a fur rug while tripping, the only woman in the house. While the Rolling Stones survived this scandal unscathed, it led to Faithfull being branded a "whore" in the British media and led to an escalating drug habit. In 1972, Lori Maddox was 14; she met Led Zeppelin guitarist Jimmy Page at L.A.'s Hyatt House hotel, where he spirited her away and kept her under lock and key for many nights to shield the fact that he was committing statutory rape. In 1982, Tam Paton, the manager of teen idols the Bay City Rollers, was convicted of molesting two boys as part of the Walton Hop scandal, which eventually took down numerous British music business executives who frequented that all-ages Surrey club. In the 1990s, teen pop mogul Lou Pearlman allegedly demanded sexual favors from many of the underage musicians he managed, some of whom were only 13.

These rock and pop memories are all ones I pulled from the top of my head, without doing any research. They're not obscure. And they're being made anew every day. The threat of adult men violating women and boys haunts every era and subculture, because art worlds like these exist within a larger culture that's fundamentally patriarchal and racist, placing white men in positions of ultimate authority, and men above women, even when people work to cultivate equality. (This is Sexism 101, and many writers have shown how it works in popular music.) Because rock and roll originates within a celebration of the spirit of teenage self-empowerment, girls especially have moved more freely within the spaces it creates than they could elsewhere, and, in doing so, have often found themselves in peril of violation by the very men who would call them queens.

Loving rock and roll requires engaging with a terrible reality, one that the music itself has not solved and sometimes helped its fans to forget. It's this: The real erotic freedom many women, and young people in general, have experienced through rock and roll is always partial and precarious. As great as it feels for a girl to let the noise and rhythm surge through her body, that body still moves within a world where others wield all kinds of weapons to contain you. And they may do so even if they're great artists, "good" guys, even legends. They may do so even if, unlike the clearly amoral Kim Fowley, they mean to do their best.

It's crucial that the truth that Jackie Fuchs has raised, truth that keeps resurfacing, not be turned against young women. Society needed rock and roll partly because the fact that young people are sexual had been kept under wraps in ways that stigmatized the very people whom moral arbiters meant to protect. But young people are also insecure in so many ways: in their minds, in their social status, in their very bodies. Becoming aware of their vulnerability necessarily changes what we can accept within the wondrous spaces that music can build. The painful knowledge of that tenderness, so easily misused, is what I carry around within my mind as a lifelong fan of loud guitars and the heat they generate — a woman who was once a high school girl getting felt up in the bathroom of a Seattle all-ages club by a local bass player who abandoned me when I almost threw up a White Russian all over his red New Wave pants. My free will put me in that bathroom. I know the rush of feeling sexy and young and wanted. I know what can come next.