Accessibility links
The Strange Story Of Lucia Cole, A Pop Star Who Doesn't Exist : The Record The strange story of a made-up pop star who managed to keep an album on iTunes for six weeks and get 64,000 followers on Twitter, without recording a note of new music. 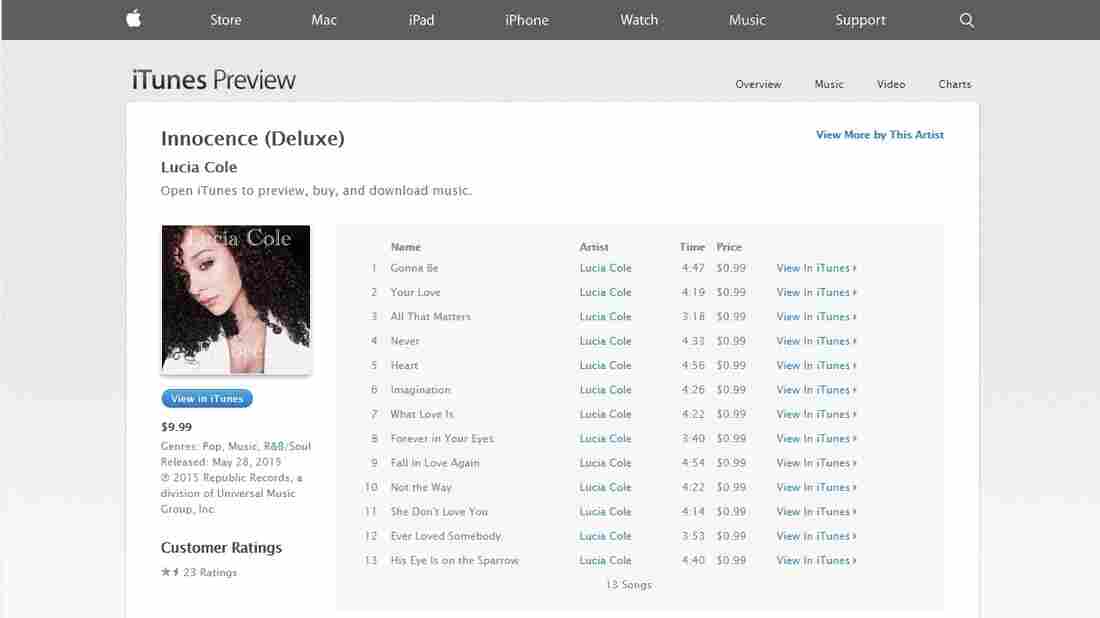 A screenshot of the now-removed page for Lucia Cole's album, Innocence, on iTunes. NPR hide caption 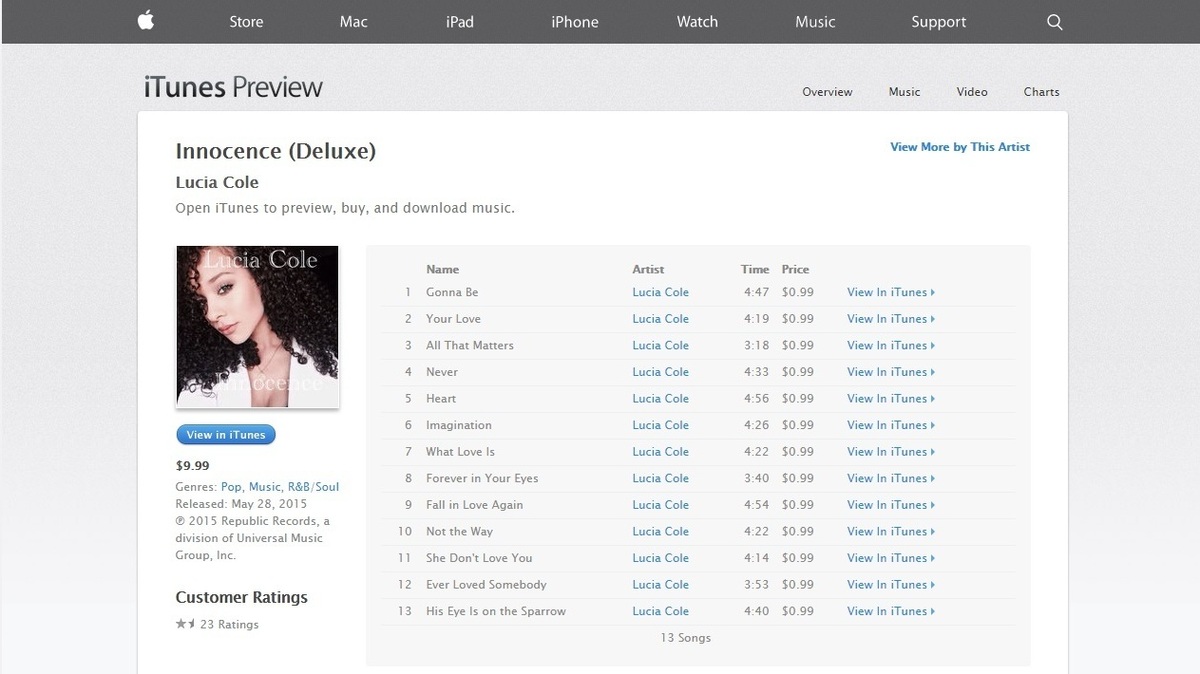 A screenshot of the now-removed page for Lucia Cole's album, Innocence, on iTunes.

The Internet is a strange and wonderful place.

Say you're an up-and-coming singer-songwriter and you're looking for an audience. You've got an active presence on social media, a deal with a major label and a proven sound that, while a little dated, probably would have sold reasonably well if it had come out around the peak of the late-'90s/early-'00s bubblegum pop era.

That's the story of Lucia Cole, as far as I can tell. I say "as far as I can tell" because, well, Lucia Cole seems not to exist and is, at this moment, quickly vanishing from the Internet. But on May 28, an artist by that name released an album called Innocence on iTunes, supposedly through Republic Records, which is owned by Universal Music Group, one of the three remaining major record labels.

Earlier this week, the blog Pop Culture Died In 2009 pointed out that these songs by "Lucia Cole" were, yes, actually just Jessica Simpson songs, re-uploaded to iTunes with different titles. That was one of many fabrications (these were uncovered and collected over the last few days by fan sites, Twitter users like @LeonButura, pop music message boards like ATRL.net and the Pop Culture Died In 2009 Tumblr). The story got picked up on other gossip blogs, many of which took a congratulatory tone. Call it a scam, call it a highly orchestrated art project, call it a hall of fame-level catfish — it was a dedicated act of role-playing.

I called Republic Records, the supposed home of Lucia Cole, at 4:00 p.m. To zero surprise, a spokesperson confirmed that nobody by that name is signed to the label. By 8:30 p.m., all of Cole's music had been removed from iTunes. It was, at the time this was written, still available on Amazon, Spotify and Tidal.

Cole's Wikipedia page was deleted earlier this week. Her Twitter feed is protected and she has not responded to requests for comment. An email sent to the contact address on her Twitter page was returned as undeliverable.

For the last six weeks, whoever uploaded those songs has been committing a theft of intellectual property so brazen it made me wonder how the album could possibly have made it into the iTunes store without some kind of red flag going up. SoundCloud employs software that can scan uploaded music and flag songs that sound too similar to copyrighted material already in the database.

I emailed Apple to ask about iTunes' process for verifying content and label affiliations, but have received no official comment yet.

We shouldn't be surprised by hoaxes, unverified assertions and lies on the Internet, but this fiction gets weirder and more elaborate the deeper into it you dig. Below are a few highlights from the short career of Lucia Cole, a.k.a. whoever was pretending to be Lucia Cole by stealing songs from old Jessica Simpson albums and photos from a model's Instagram account.

Let's end on an appropriately ambivalent note. According to a Soundscan report, no song by Lucia Cole has sold more than five copies. But the apparent ease with which this stunt was pulled off, and the length of time it took to come down lead to an inevitable question: How many more Lucia Coles are out there?

A previous version of this story attributed the exposure of the Lucia Cole hoax to a single blog, Pop Culture Died In 2009. It's the Internet, so things are more complicated than that — a number of Twitter users, fan sites and message board users first uncovered most of the fabrications.