Accessibility links
Drive-By Truckers To Release Massive Live Album : The Record The 35-track It's Great To Be Alive!, recorded over three nights last year at the Fillmore Auditorium in San Francisco, will be out October 30. Hear the album's version of "Birthday Boy" now. 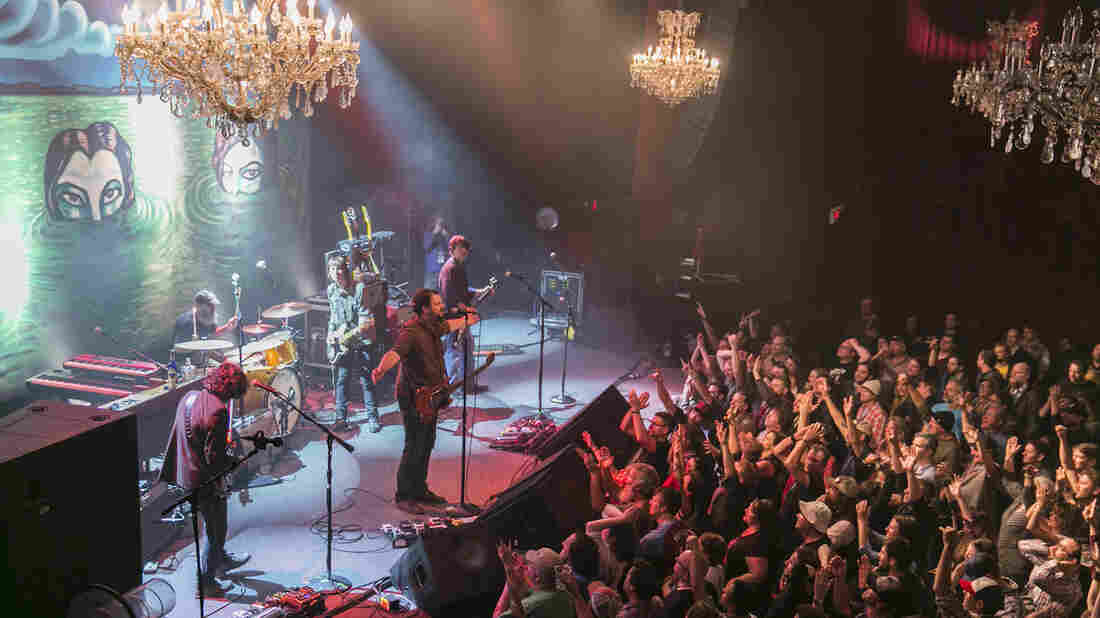 Enlarge this image
Greg Chow/Courtesy of the artist 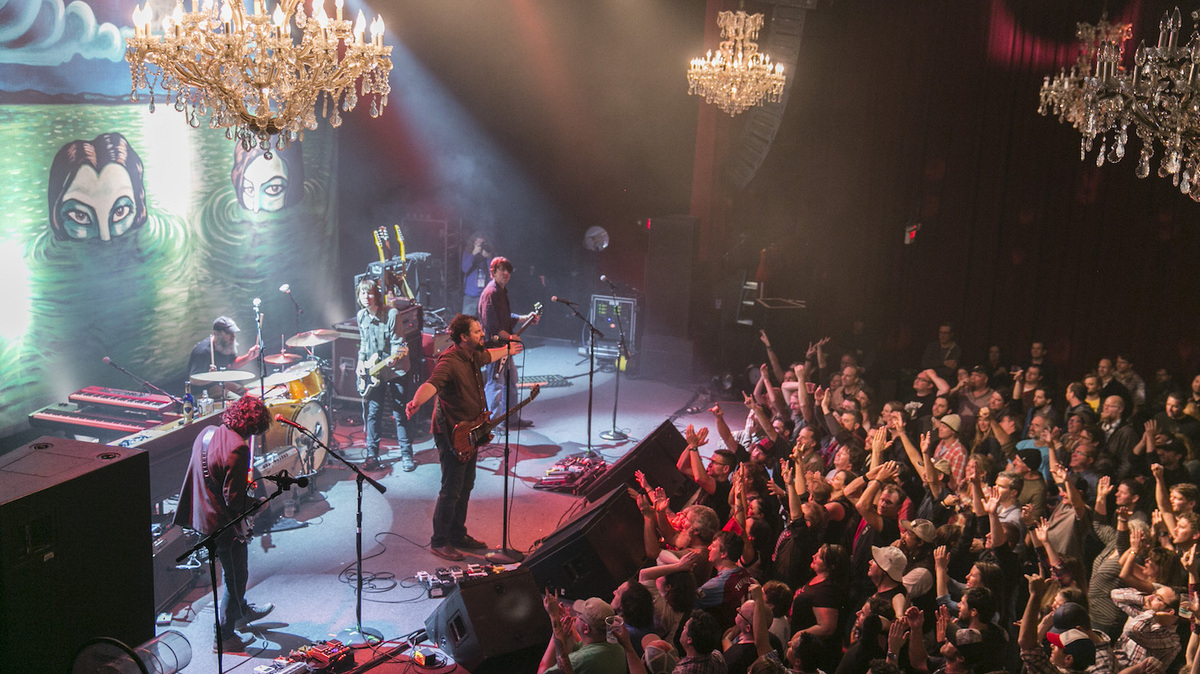 Greg Chow/Courtesy of the artist

A great concert is an occasion to tell stories that, as it unfolds, becomes a story unto itself. The members of Drive-By Truckers have been spinning tall and real tales since 1996, with the band's core partnership of singers/songwriters/guitarists Mike Cooley and Patterson Hood dating to nine years before that. A lifetime of crazy nights in clubs and serious days in the studio has yielded 10 studio albums and more than 2,000 set lists for this band, as well as the considerable distinction of having taken Southern rock into the future.

From the first time my husband and I stumbled upon the Truckers in a Pittsburgh dive in 1999, we've been the band's joyful fans, and I'm proud to call these Alabama-rooted men my friends, too. Connected to a certain swath of indie rock that did Springsteen and The Replacements proud by turning punk's wildness toward telling the truth about real, raw America, Drive-By Truckers also stand alone, boasting distinguished graduates Jason Isbell and Shonna Tucker and a current line-up that's as tough and grand on any given night as the best live rock band you've ever seen.

Now the Truckers are celebrating those thousands of nights spent with the amps up by issuing a massive live album — 35 tracks! — recorded during a three-night stand at the Fillmore in San Francisco. The set boasts favorites from every point in the Truckers' career, starting with Cooley and Hood's early band, Adam's Housecat, and going all the way into material from its excellent 2014 album English Oceans, including an epic version of "Grand Canyon," the band's gorgeous ode to the late Craig Lieske, who was the band's tour merchandise man for a decade, and who died in 2013. It's Great To Be Alive! will be out October 30, and though it's not quite as perfect a Truckers experience as seeing the band live a dozen times over the years, it's pretty close. Hear a sample below: Cooley's update on Bobbie Gentry's "Fancy," the wry and perceptive "Birthday Boy."

Patterson Hood took the time from a busy Truckers schedule of touring and recording the band's eleventh studio album to answer a few questions about It's Great To Be Alive! via email.

After so many years of touring, which songs have changed for you in a live setting in the most engaging ways?

One of the criteria we were looking for in this album was songs that have in some way morphed or grown or were especially benefiting from the approach that this lineup takes. It was great putting the Adam's House Cat song "Runaway Train" on an album after all these years. We recorded that song right before AHC broke up in 1991, so it never came out. I always really liked that song. "Girls Who Smoke" was an outtake from [the 2010 album] The Big To-Do that became a crowd-pleaser live, and it was fun putting that on here. I hate my singing on a lot of our earlier albums, so it's nice having vocal takes that don't suck. This lineup plays so raw and with so much expression and dynamics.

We sequenced it to be like kind of an ultimate DBT set list. We never use a set list from night to night so the show is ever evolving, but for this it was like, what would be the ultimate three hour show we could play right now?

We also sequenced the vinyl so that each disc was like its own mini-record. Hopefully it will be the same for each of the CDs. I mean, I realize that no one has three hours to listen to an album any more, so hopefully each section stands up as its own thing.

Which songs still make you smile the widest when you play them?

Cooley's songs. I never get tired of playing any of his songs. He continues to amaze me after all these years. And "Grand Canyon." The version on English Oceans was a very early take and it has morphed a lot live since then. The ending of it is a very primal part of our show and I feel like that night in San Francisco was the night that it really came into its own.

Your storytelling between songs is a big part of the Truckers' shows. How do you see each concert as a fresh storytelling experience, or even as a story in itself?

I'm still a work in progress as a storyteller, and sometimes feel like there's only so much I can do in the context of a two-hour rock show, but I do look at all of it as kind of one big narrative.

I've been doing more non-music writing lately and trying to dig deeper into all of that on my solo shows, but I still love seeing how far I can go there without bogging down the rock. This was a big part of sequencing this album. You know, I always think in terms of movies and all these songs kind of add up to some big connected story, even if by accident.

You've said that the Fillmore is your favorite American room. Is it the history? The sound system? The wonderful architecture?

All of the above. We are lucky to get to play some amazing rooms. We love the 9:30 Club in Washington, D.C. and the 40 Watt in Athens. There are a bunch of outstanding rooms. The Fillmore, though, has some other thing happening. Plus, the layout makes it a great recording room. I love how there's no barrier between the audience and stage so it's like everyone is right in your face when you play, which always affects the way we play there. The combination of the laid back vibe of the place with that immediacy made for a great combination for recording this album. we all had a gut feeling that it would pay off — and it did in spades.

Playing The Fillmore the first time was a huge milestone in our story as a band. I'll never forget the first time we headlined it and sold it out. This was our first three night stand. The staff is incredible, too.

Working so long with Cooley, what makes him an ideal band mate in a live setting at this point?

Cooley is outstanding on all levels. The whole band is. Cooley and I hit 30 years of playing together next week. [Drummer] Brad Morgan has been with us for nearly 17 years. [Keyboardist] Jay Gonzalez is starting to push towards a decade. [Bassist] Matt Patton has only been in the band for four years, but we had so much history before he joined, since he was a member of the Dexateens [whom Hood produced], that it was like we already had a few years behind us.

In the end, beside being such a fantastic and supportive partner in crime, I love Cooley's songs and am honored to get to play them and I absolutely love what he does to my songs. He always plays against the grain of what I had thought of, but obviously I love that and need that. My plan at this point is to play in this band for the rest of our lives.