Accessibility links
In The Middle Of A Whirlwind, Miranda Lambert Shares The Spotlight : The Record Forget tomatogate. Put aside the still-fresh news of her divorce. When Miranda Lambert played the tiny stage at Nashville's 3rd & Lindsley last week, she put the focus on fellow female songwriters.

In The Middle Of A Whirlwind, Miranda Lambert Shares The Spotlight

In The Middle Of A Whirlwind, Miranda Lambert Shares The Spotlight 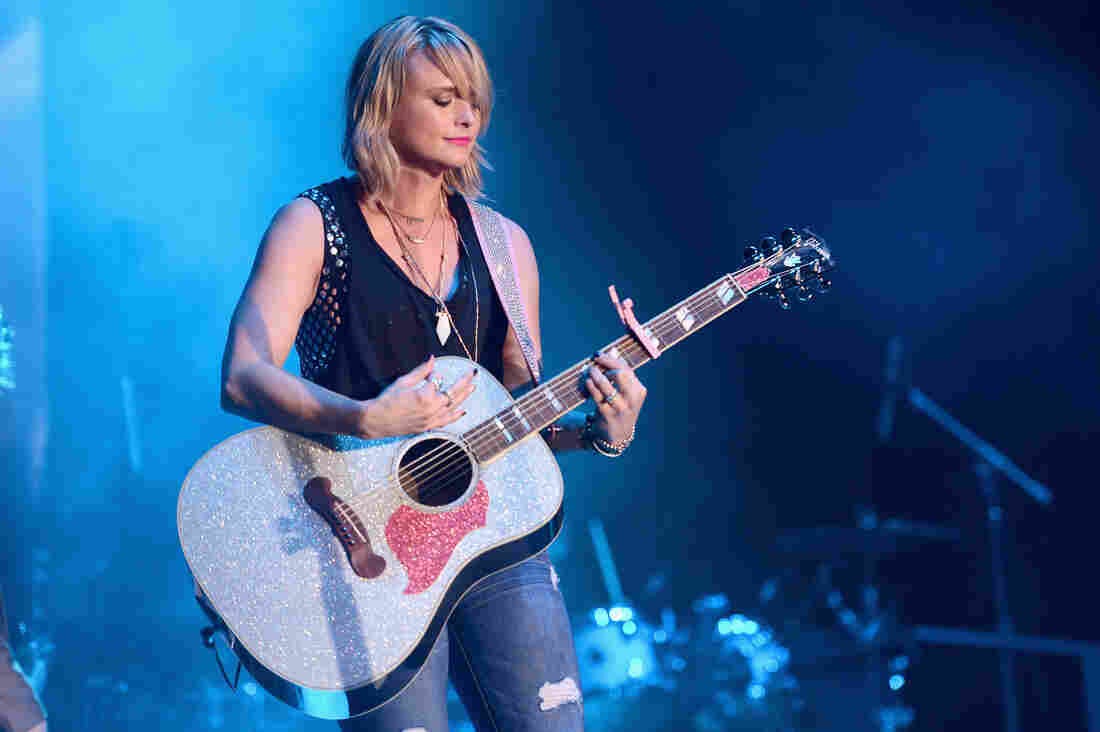 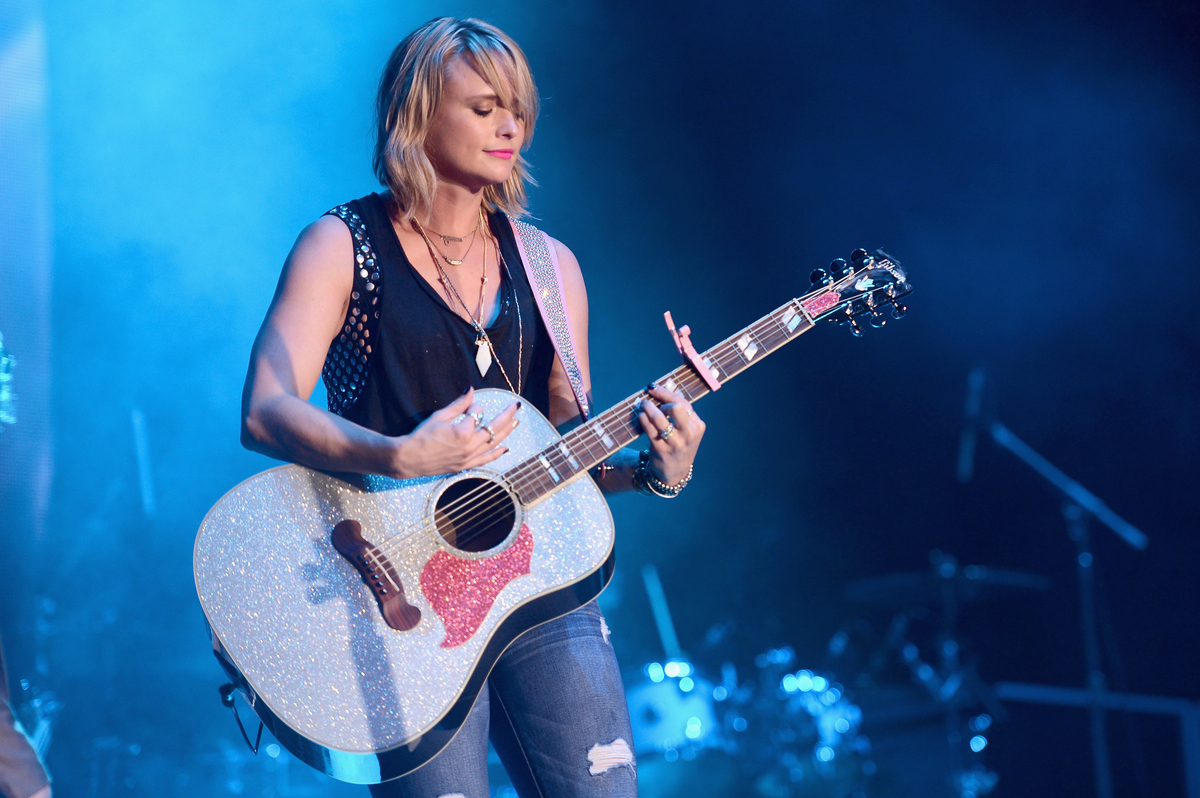 Miranda Lambert on stage in June.

There was a time when rock critics regularly described Miranda Lambert as some sort of vengeful, arson-happy, petite, blond Amazonion, thanks both to the potent imagery in some of her early singles and the critical tendency to view the characters which inhabit country songs in a narrow, literalistic light, as opposed to an imaginative one. It took several years, and a decidedly reflective radio hit or three, for her to supplant the cartoon version of her with the identity of a gutsy, complex woman and a songwriter of consequence. At this point, only one other female artist, Carrie Underwood, rivals her country superstar status.

There is one aspect of those early impressions that continues to ring true, though, and that's Lambert's readiness to summon a sense of purposeful moral outrage, to take up for people in vulnerable or powerless positions, be they survivors of domestic abuse or herself, particularly when she felt bullied by the media for being anything other than rail thin. Lambert has always found ways to champion female colleagues; Natalie Hemby has long been her go-to co-writer, Angaleena Presley and Ashley Monroe, both still in the audience-building phases of their careers, are Lambert's sometime-band mates in the Pistol Annies' evenly split spotlight and Underwood was her duet partner in the big, blustery, arena-rocking, Thelma & Louise-styled number one "Somethin' Bad."

Over the last few years, prospects have grown increasingly dire for women trying to score hits as writers or singers in the country radio format. What they're up against became clearer than ever in late spring, when a male radio consultant advised the readers of a trade mag that playing fewer women — or to use his off-putting metaphor, sprinkling them in as conservatively as tomatoes on a salad — is better for ratings. That got Lambert, and a host of other artists, industry types and fans, understandably worked up. But it had nothing to do with her face popping up all over supermarket tabloid covers and celebrity blogs over the past week. On July 20th, she and her fellow country superstar-husband Blake Shelton announced they that were divorcing, and speculation as to the reasons for the widely followed and fetishized couple's breakup has become a giant, click-baiting gossip generator.

The same day they released their joint statement, Lambert tweeted a heads-up about Roadside Bars & Pink Guitars Unplugged, an intimate show she'd be playing in Nashville the following week. On tour she routinely sells out arenas, but only the first 500 people to snatch up online tickets to the gig — which took less than five minutes to sell out — could squeeze into 3rd & Lindsley Bar & Grill to see her. They filled all the tables and spilled into the standing room, where they could hardly avoid getting jostled by wait staff balancing bottles of beer and baskets of bar fare on trays. Everybody in the room on Tuesday night expected Lambert to speak her doubly burdened mind. It quickly became obvious that she was there, first and foremost, to stick up for women trying to find a place for themselves in country music.

In a money-where-her-mouth-is move, she'd made the show a benefit for her Women Creators Fund. (Beginning next year, it'll put a female student through the music industry program at Nashville's Belmont University.) Seated on stools next to her were two of her female co-writers, Hemby and Jessi Alexander, each armed with acoustic guitars, and slightly set back from the front line they formed were Alexander's picker-songwriter husband Jon Randall and Hemby's publisher and fellow hit-crafter Luke Laird, both on hand to provide additional accompaniment. All of them are part of Lambert's songwriting circle, in addition to supplying material, composed with various combinations of co-writers, to a slew of other artists. An empty seat waited on the far end of the stage for the spunky, striving, young female country acts that Lambert summoned to the stage one by one. First came Louisiana transplant Courtney Cole, then Clare Dunn, a guitar-slinging heartland rocker, and finally effervescently impish RaeLynn, who's already scored a country top 10. (They'll take turns joining Lambert as openers on an all-woman tour this fall.) The big-finale surprise guest was Karen Fairchild, whose country-pop vocal quartet Little Big Town sang on Lambert's single "Smokin' and Drinkin'." For Nashville songwriter showcases, this sort of in the-the-round format is the norm: multiple writers perched side by side, taking turns performing, jumping in on harmonies, strumming along and ultimately sharing the spotlight.

Sporting a sparkly, sleeveless Patty Loveless t-shirt, Lambert confessed her nervousness at the up-close-and-acoustic setting. "It's been a long time since we've played like this, since I've played like this," she noted. But she proved to be the ideal host, rapt, appreciative and occasionally bobbing her heard or harmonizing as the others sang their compositions — even though any fan would recognize most of the songs Hemby performed as being part of Lambert's recorded repertoire. For all their collaboration, the two of them had never done a writer's round together; Hemby observed that singing Miranda Lambert songs with the woman herself feet away felt a bit like being on American Idol. During the blithe, bluesy kiss-off "Baggage Claim," Hemby glanced over at Lambert to see if she felt like taking the second verse. Later on, Hemby dedicated the tender tune "Virginia Bluebell" to Lambert as an empathetic gesture. RaeLynn, who addressed Lambert much as one might a big sister — "Do you like my unicorn shirt?" she bubbled after climbing on stage — played her big single and an unreleased ballad Lambert had requested, "Love Triangle," sung from the point-of-view of a child living with the aftermath of her parents' divorce. In addition to Lambert's stumping for the talent and potential of RaeLynn, Dunn and Cole, there was much celebration of past triumphs. Between them, Alexander and Hemby — and Laird and Randall when they each got a turn to sing in the "boys' round" — could choose from countless cuts that country stars have taken to the charts; Alexander more than once interpreted a song written for, and made famous by, a singer of the opposite sex. And Lambert gave equal time to her own hits and deep cuts.

No one referenced "tomatogate," as the consultant's sexist gaff has come to be called, though a young girl in the crowd held a tomato-shaped poster board sign. Lambert was evidently in the mood to be more direct than cute, emphasizing that she's "a big fan of women in country right now" and growing deliciously acerbic as she recounted the long, uphill climb to her first number one hit, the Hemby co-penned "White Liar." "Sometimes you've just gotta kiss a lot of ass before you can get anywhere," Lambert quipped, before launching into the song about turning the tables on a cheater. She introduced the nostalgic "Automatic," the reigning Academy of Country Music Song of the Year (also written with Hemby), with another pointed jab: "Thank you for letting girls win something for writing something."

What went unspoken all night was Shelton's name, though his presence couldn't help but be felt. His music played over the P.A. before the show, and Alexander even performed "Mine Would Be You," a love song of his that she'd had a hand in writing — with Lambert singing along, no less. Heard in that context, many of the lyrics in her own songs — lines like "Staying married was the only way to work your problems out," from "Automatic" — brought to mind the private anguish of the breakup. Lambert was incredibly classy about it all, professing her woundedness and leaving it at that. (As she well knew, Nashville is an industry town, and there were plenty of folks in the room with whom both her and his professional and creative fortunes are intertwined. She and Shelton even had a playful Twitter exchange last week promoting a masterful new album by their mutual friend Monroe.) Besides spending the last couple of weeks writing, she said she'd been "living off caffeine and sad songs lately." And she played a few, delivering a much softer version of the devastating self-appraisal "Bathroom Sink" than the one that appeared on last year's Platinum, and elegantly magnifying the pain in "Dear Diamond," her modern country heartbreak ballad contemplating the dissolution of a marriage. At moments like these, the vinegary-sweet suppleness of her delivery sounded movingly delicate. But when she called Fairchild to the stage for a collaborative rendition of Little Big Town's smoldering hit "Girl Crush," Lambert playfully lingered over the hook, "I've got a girl crush," savoring the circle of mutual support and empathy that she'd convened that evening. That fierceness she's famous for? She'd channeled it into a ritual of solidarity.