Accessibility links
Dolly In Nashville: Authenticity That Makes Room For Rhinestones : The Record At her first headlining shows in Nashville in a dozen years, Parton turned the Ryman Auditorium into the Church of Dolly. 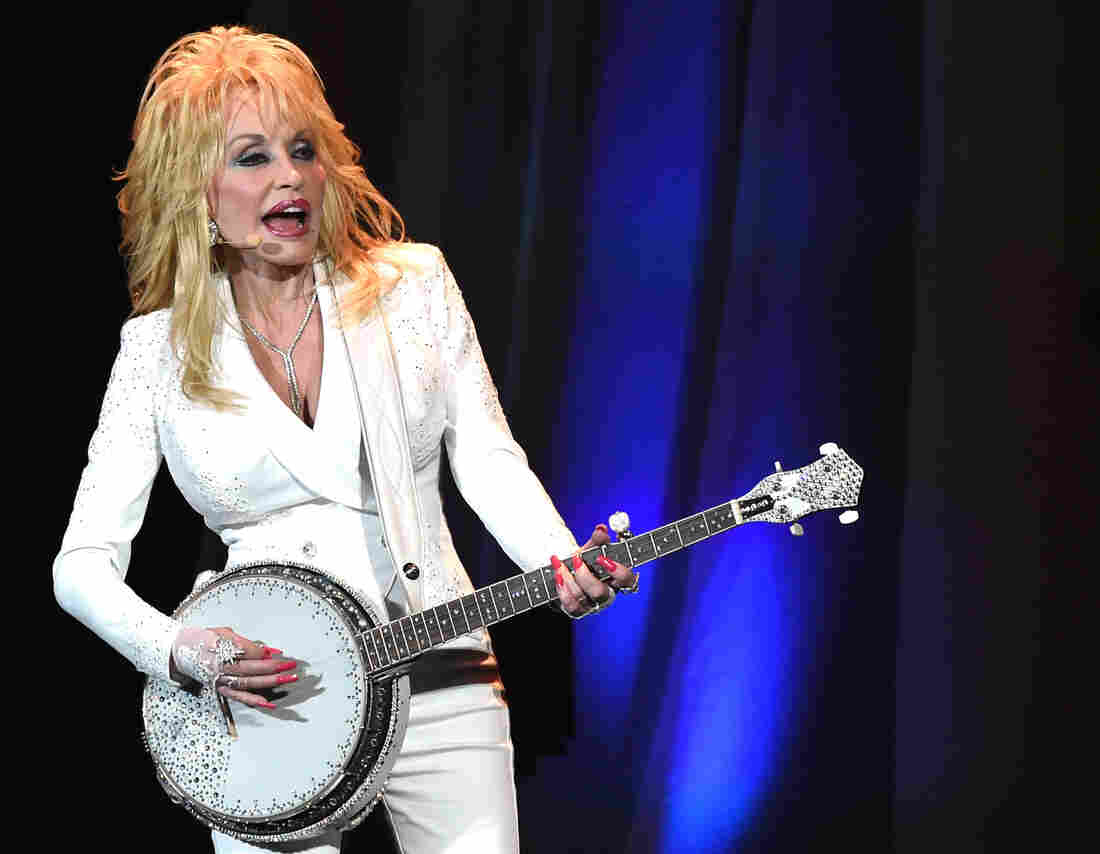 Dolly Parton on stage at the Ryman Auditorium on July 31, one of two sold out shows that marked her first headlining gigs in Nashville in 12 years. Rick Diamond/Getty Images hide caption 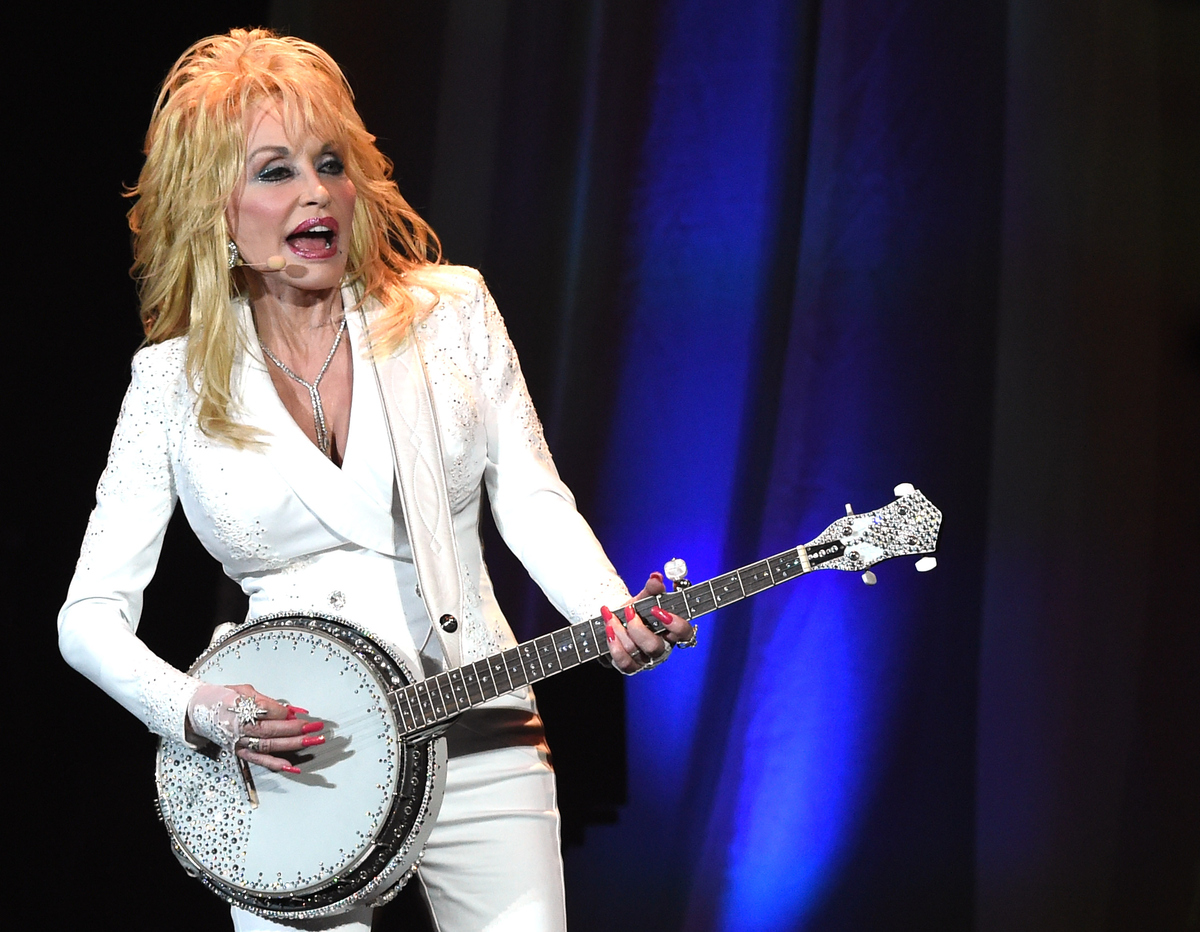 Dolly Parton on stage at the Ryman Auditorium on July 31, one of two sold out shows that marked her first headlining gigs in Nashville in 12 years.

When the renowned radio personality and Grand Ole Opry fixture Bill Cody walked onto the stage at the Ryman Auditorioum to welcome Dolly Parton there for the first time in twelve years, he called her "the most beloved artist of all time." Then he quickly, almost imperceptibly, corrected himself, adding a qualifier: female artist." Who knows what flashed in Cody's mind in that moment — perhaps the face of Johnny Cash, the patron saint of believers in musical authenticity, or of hallowed originator Hank Williams, or affable current standard-bearer George Strait. Or maybe the thought wasn't even that formed. His words simply reflected the status quo. Country, like rock, rap, symphonic music, literary writing and virtually every other art world whose reach goes beyond the domestic sphere, has always honored men as more central and more real, defenders of the paradigms that women may expand or even challenge, but never originate.

On this night, however, Dolly Parton and her fans didn't let those presumptions bother them, not for one minute. The Mother Church of Country Music became the Church of Dolly. It was a wide-open space, one with room for dulcimers and drum machines, dirty jokes and gospel songs and a pure soprano that can still fill a room. (Although she said it was all right to cough during her nearly a cappella offering of the folk song "Little Sparrow," nary a sound was heard as she nailed every note in a bluesy, chill-inducing turn.) In a flawless, career-spanning performance assisted by her longtime band and a stage manager who helped her switch from jewel-studded zither to banjo to piano to electric guitar, Parton showed how the edifice of musical authenticity looks different, but is just as strong, when built upon conventionally feminine ideals and actions. She guided the audience through her rich legacy of heartfelt, deeply crafted music in a voice that deployed flirtatiousness and affability while remaining reflective and strongly self-possessed. She reached into her deep catalog for several songs about her mountain home, all of which honored the craftiness of rural people who are, as she sings in "Appalachian Memories," creative with their hands. She also delivered the hits honoring women who work nine to five, are devoted to their families, and enjoy pursuing both personal beauty and sex. These songs that travel from country to city celebrate ingenuity and optimism, the core qualities that also define Parton's career.

Her often-told story of being inspired as a child by a gorgeous prostitute in the big city of Knoxville, a day's drive from her mountain home — "that's what I wanna be when I grow up, trash!" — got a huge laugh at the Ryman, but beneath the giggle was the serious contention that being trash, in other words being a gloriously constructed, openly erotic, aggressively female force, can be as powerful as being cowboy-hard, preacher-proper or troubadour-serious. Lobbing dozens of off-color jokes toward the crowd, getting deeply sentimental on old favorites like "My Tennessee Mountain Home" and disco-frivolous on dance numbers like "Baby I'm Burnin'" (originally issued on pink vinyl in 1978, and on Friday interpolated with Alicia Keys's "Girl On Fire"), Parton proved that the overt emotionalism and plain fun that might seem like trash in a more stringent setting is treasure, too: the coin of a realm where, as she said, "God wants us to be happy."

All of this dazzle, pared down from her more theatrical touring productions, in an advertised "Pure & Simple" setting that nonetheless featured billowing curtains lit in a variety of hues, glittering firefly lights and those rhinestones, which gleamed on Parton's person and on most of the eight instruments she played, would have destabilized the presence of a lesser artist. But Parton fulfilled every possible standard of musicianship, and in fact presented herself as a badass virtuoso with an unrivaled mastery of stagecraft. This has always been Dolly's miracle. She expresses a woman's sensibility and even assumes womanly stereotypes while also showing that a woman can fully inhabit supposedly masculine positions, too.

At the Ryman, she exposed the lie of hierarchies that privilege masculinity by showcasing herself as a songwriter who's gained mobility and security on the strength of her own ideas and as a sexually confident leader who can ogle a hot man one minute and fry him up in the pan of her wit the next. Introducing a dazzling Southern gospel quartet rendition of "Do I Ever Cross Your Mind," she was one of the boys, reminiscing with her bandmates about eating nachos on the tour bus. Extolling the charitable efforts of the dentist Dennis Wells, whose foundation named for his late son, Dustin, benefited from this event, she made sure to pleasantly leer at him, too. In her white tuxedo jumpsuit and modified Rod Stewart wig, Parton demonstrated just how silly it is to worry about how a "real" woman or man should act. At one point she thanked the East Tennessee family that made her "who I am," but quickly added, "whatever that is." In Dolly's world, there's no reason to ever settle into one fixed identity.

Dolly Parton does have a ruling identity, however, and that is as the matriarch of the kind of music that can accommodate a variety of voices and approaches while remaining believable. She has witnessed — and instigated — many shifts within her home genre since the night Johnny Cash first introduced her at the Ryman, when she was just a child performing with her uncle, Bill Owens. Today, country may be on the verge of yet another phase, with young women openly inspired by Parton, like Ashley Monroe and Kacey Musgraves, earning the loyalty of millennials who can relate to an idea of authenticity that makes room for rhinestones. Her Ryman show may have been a retrospective, but Parton is as relevant as she has ever been: a beloved role model still kicking up stardust.