Accessibility links
No Blank Space, Baby: Taylor Swift Is The Soul Of Ryan Adams : The Record Adams' 1989 recognizes a rock lineage born of a woman. He's not legitimizing Swift's work – he's figuring out how her voice can validate and include his. 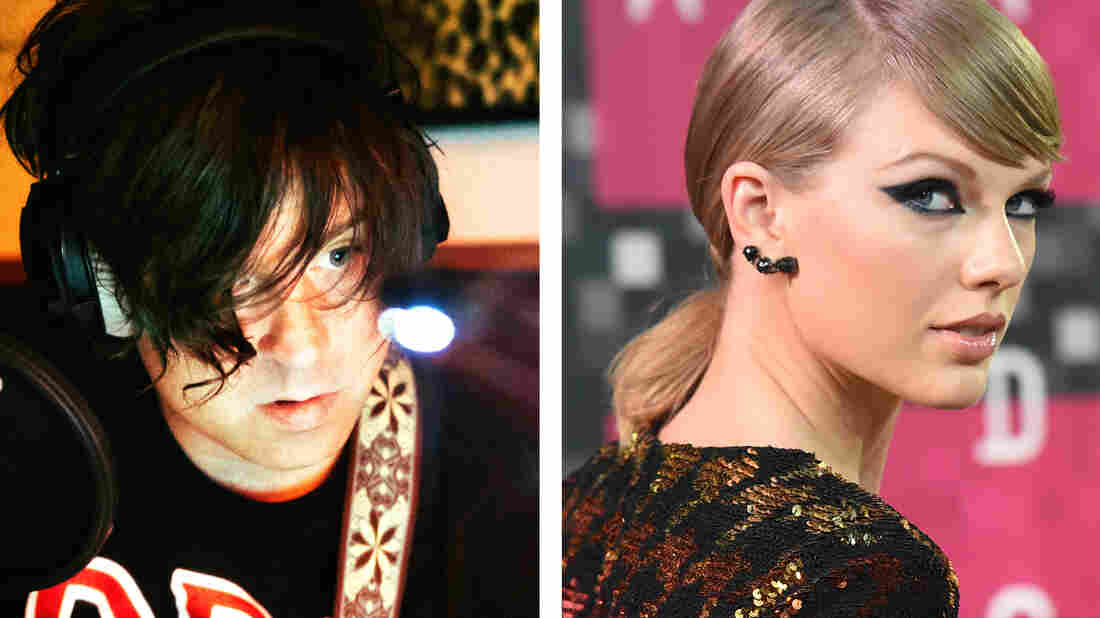 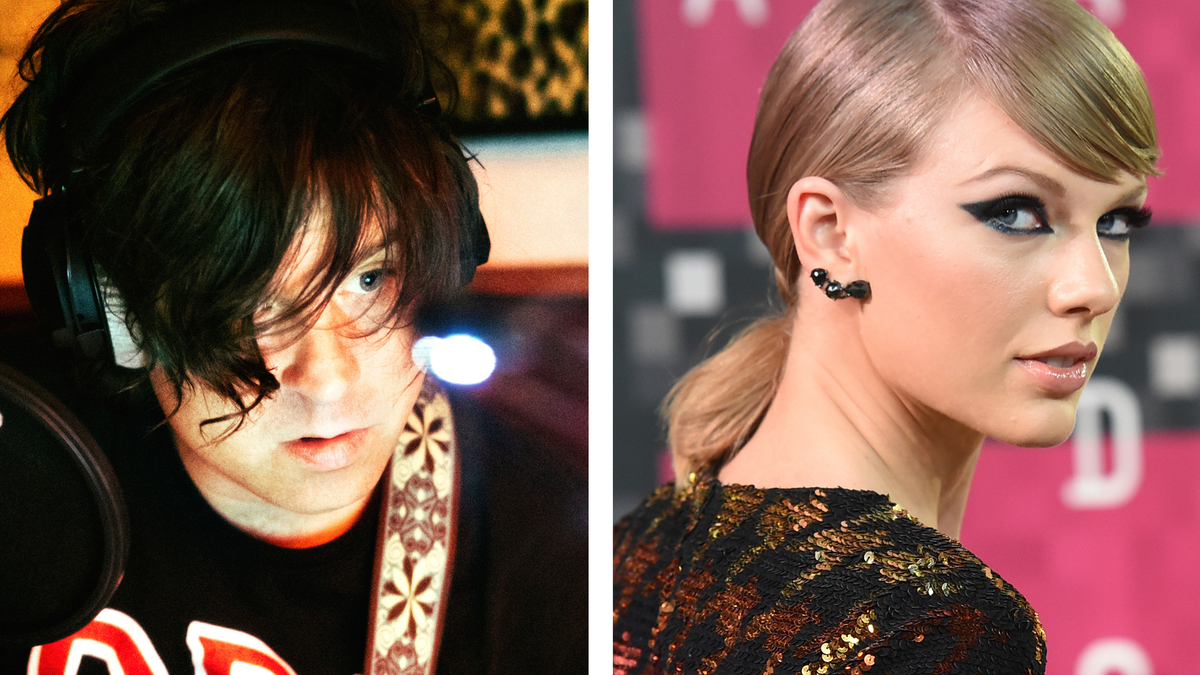 Perhaps the least surprising thing a popular musician can do in 2015 is to interrupt the flow of her own work with a left-field cover song. It's been nearly three decades since art rockers Sonic Youth briefly refashioned itself as a Madonna tribute band, and even longer since those slaphappy nights on the college-bar touring circuit when the Replacements would pull out forbidden gems by KISS and Aerosmith. Those moves said something about indie music's tendency to self-limit: they revealed the snobbery inherent in subcultural opposition and questioned the scene's authenticity-fetishizing judgments against female-driven mainstream pop or showy classic rock. Risking a reinterpretation of "Into the Groove" or "Black Diamond," these groups reminded young aesthetes that pop pleasure can be as freeing, in its own way, as underground discernment.

Now, pop is critically cool, the mainstream music industry has flattened, and artists use whimsical covers as branding devices, not bold statements. It happens in every corner: country star Sam Hunt covers Mariah Carey to prove his '90s R&B bona fides; divo Sam Smith dares a little Whitney Houston to cement his reputation as a vocal powerhouse. A firmly indie artist like Empress Of turns to Katy Perry's oeuvre, not as a joke, but to show that today's biggest hits are on a continuum with her more experimental efforts. This is a natural progression for a culture whose ruling metaphor is the network, within which every connection is ostensibly equal. It's also reflective of a musical generation that grew up with hip-hop, which puts redeployment of others' music at the heart of the creative act, through sampling and verbal interpolations.

When Ryan Adams first announced his song-for-song reinterpretation of Taylor Swift's mainstream-defining album 1989, it seemed that this was just another somewhat lighthearted move across today's musical landscape. But an actual listen to the self-directed singer-songwriter's take on the pop queen has a headier impact. The thoroughness of this project, Adams's obvious care for the material, and his clear thinking about how to approach it, have made this 1989 not just another eyebrow-raising stunt, but a means of exposing the ways the old prejudices still hold—even within this poptimist moment. It also hints that to truly counter those prejudices requires deep adjustments to the way we listen.

Adams has made it clear that he considers Swift a peer and has forged a deep emotional connection to her songs. "They're very vulnerable and brave and all the stuff I love about Husker Du and Bob Mould's records," he told Grantland music writer Steven Hyden, deliberately comparing the 24-year-old Swift to an irreproachable indie rock elder. Having grown into a complex formalist himself—adept in his home style of alt-country, all varieties of rock, and even with radio-ready pop—Adams came to 1989 to recharge (having previously done so with other inspirations, like the Strokes or Oasis.) His intention matters: it turns him away from cynicism and toward an introspection that can't be laughed off. In the end, though, whatever private need Adams fulfilled by focusing on the versatility of Swift's compositions is less important than how this 1989 causes listeners to realize exactly what still so often defines pop-musical meaningfulness.

It's not necessarily musical innovation—1989 sparkles with that, though its hooky flourishes only further alienate the haters. Working primarily with producer Max Martin, Swift experimented with all kinds of beats and studio elements in embellishing her conversational compositions. Adams, on the other hand, returns to a relatively tight rock framework, the one that defined the dominance of artists like Bruce Springsteen, Tom Petty and U2 during the same 1980s blockbuster era that, for Swift, meant the Eurythmics, Phil Collins and Cher. His version of "Shake It Off" does away with handclaps and kiddie rap, instead mimicking the Boss's moody ballad "I'm On Fire." His cracking tenor on "This Love" is pure contemplative Bono. In a nice contemporary twist, his pulling back on the beat on "I Wish You Would" makes it sound even more like a song by Swift's friends and contemporaries Haim – an all-female band that bends gender by riding on the majestic chemtrails of blockbuster rock. And when Adams invokes his own past, in slightly twangy takes like "Wildest Dreams," he's drawing a thread between rock's modern patriarchs and his own generation, reminding listeners that even upstarts like Mould, Paul Westerberg and Adams himself benefited from the enduring rock truism that testosterone enables seriousness.

This is the assumption that Adams's 1989 (perhaps unintentionally) feeds and finally complicates. Women artists have, for much of the past decade, defined the face of pop, but they still aren't trusted as custodians of its voice. Key figures like Swift, Beyoncé, Rihanna and Perry constantly face accusations of not truly governing their own creative processes – of only co-writing their songs, hiring others to determine their images and stage shows, and dwelling in the shallows of romance instead of addressing more serious subjects, the way blockbuster rock's titans did. (In songs like "Dancing in the Dark," one supposes.) Within what's left of Rock, women are gaining footing. Yet even greats-in-the-making, like Annie Clark of St. Vincent, remain caught within a defined margin: the one female performer on the festival main stage, representing a supposedly limited perspective. The idea that male experience and expression defines our norms, even at the level of basic communication, and the female always enters the conversation as an afterthought, in protest, or as exceptional, remains a buried reality in popular music.

In Taylor Swift's songs, though, the female perspective is the rule. She focuses endlessly on the struggle to maintain both personal independence and intimate connections; her language unfurls in the fits and starts of interrupted talk; her songs build to struggled-for climaxes the way a young woman, taught to behave, builds toward speaking her mind. A man singing a Swift song must perform the kind of masquerade that women have done for the entirety of rock: tucking in his privilege and unconsidered bluster, taking on language and an affect that's been endlessly condemned as frivolous and weak. Adams does this not as drag, but to think differently about human experience. Take "Blank Space" and Swift's invocation of a kind of emptiness: Beneath the song's overt message of romantic need lies a deeper one about how women are expected to let men construct the meaning of their lives. But Swift doesn't do that. She speaks of herself, for herself.

Speaking through Swift's voice, Adams recalls how those other supposedly definitive male rockers also claimed something hidden from the feminine. Bruce Springsteen loves girl groups; he recently wrote two songs for Darlene Love's new album, produced by his longtime guitarist Steven Van Zandt. Tom Petty's whole 1980s output can be viewed as a buried dialogue with his friend and vocal doppelganger Stevie Nicks. Nicks's former lover Don Henley forged the Eagles sound by working with Linda Ronstadt. Yet most histories of rock—and frankly, most fans' own presumptions—place these female figures on a second tier.

Adams's 1989 recognizes a rock lineage born of a woman. He's not legitimizing Swift's work – he's figuring out how her voice can validate and include his. Some critics have derided his arrangements for being overly somber, doing away with the playful inventiveness of Swift and Martin, so fundamental to today's genre-dissolving pop palette. Others have pointed out that Swift, the most successful musical figure of her generation, hardly needs a mid-level rock moptop to lend her gravitas. These are valid criticisms. Yet his execution makes them moot, because whether he intended to do so or not, he always keeps her words, her worldview, her voice at the center. Taylor Swift is not a blank slate that Ryan Adams writes upon. She is his album's defining element. And that is a change that women musicians have deserved for a very long time.