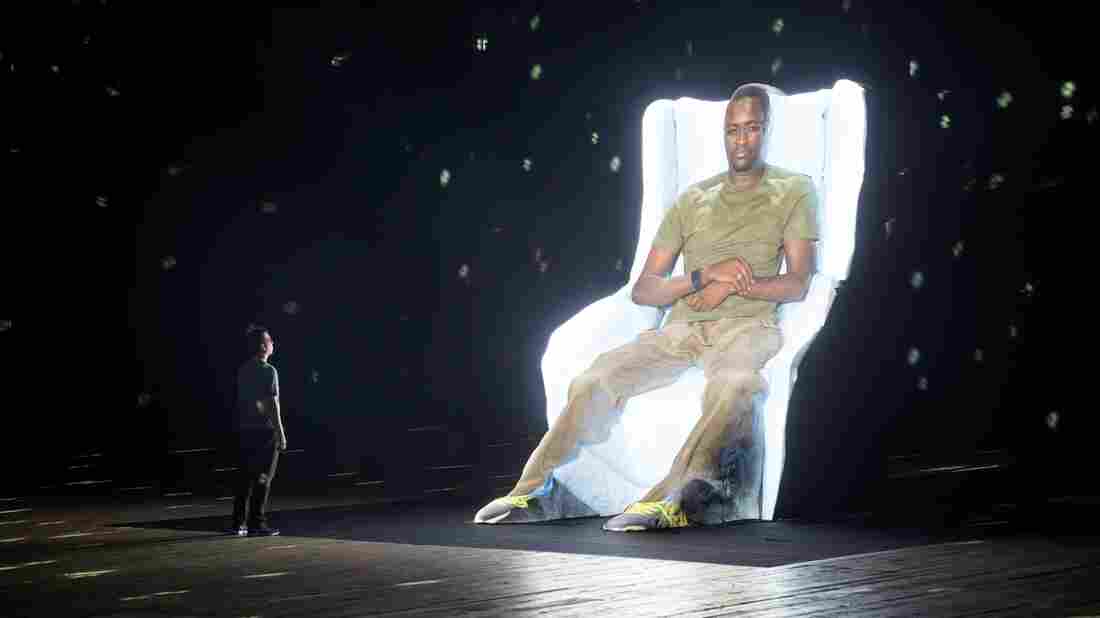 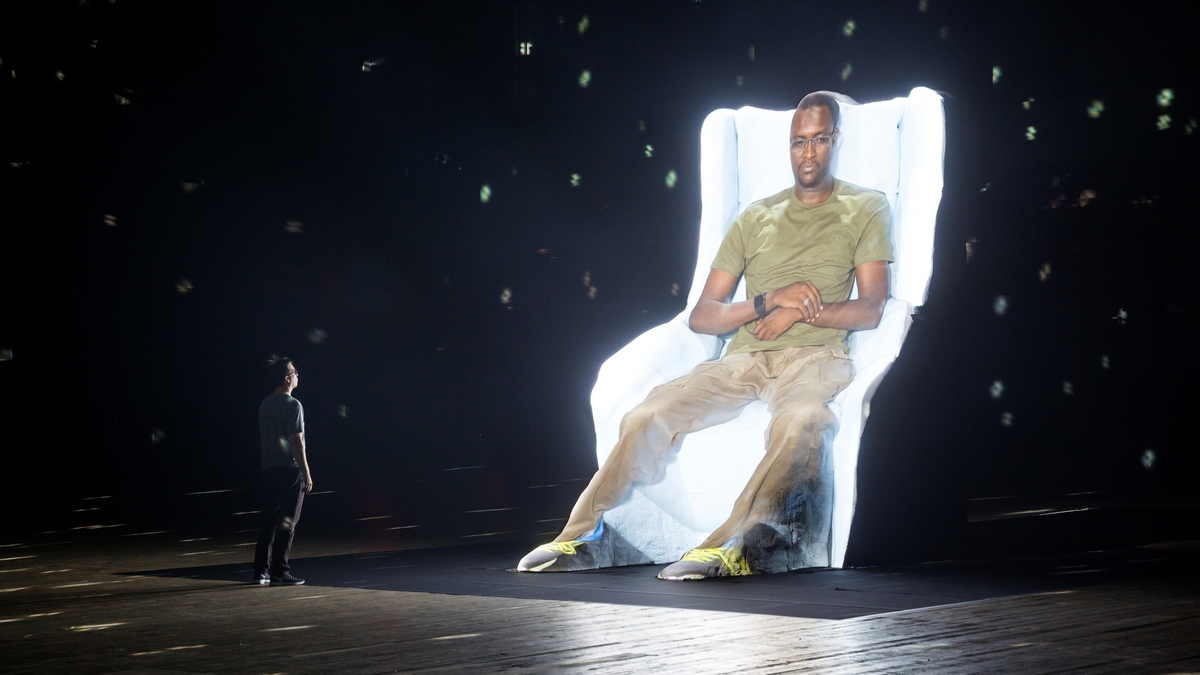 The image of former Guantanamo detainee Mohammed El Gharani is projected onto what Laurie Anderson calls a "film sculpture" in her multimedia work Habeas Corpus.

The musician and multimedia artist Laurie Anderson has long made America one of her great themes; her panoptic, early '80s magnum opus was titled United States, and her work has shown enduring fascination, and disquiet, with the way our national culture conducts itself. But Habeas Corpus, a multimedia work and concert presented at the Park Avenue Armory in New York City Friday, Oct. 2 through Sunday, Oct. 4, was remarkable even by her own standards. Created in collaboration with Mohammed El Gharani, a former Guantanamo prisoner released from the notorious facility in 2009, the piece interrogates our country's questionable actions through the power of storytelling. It shows how stories told by governments, and those we tell ourselves, can imprison — but also how they can liberate.

El Gharani's story, as presented in the piece (and explicated by Anderson in a recent essay) is roughly this: Born in Chad, he was captured in a Pakistani mosque at age 14, his apparent crime was being in the wrong place at the wrong time. He wound up in Guantanamo on charges that were later deemed to be based on dubious testimonies, and spent over seven years imprisoned there, subjected to torture, beatings and solitary confinement. Then the charges were suddenly dismissed and he was freed, with scant explanation and no apology. (The human rights organization Reprieve secured El Gharani's release, and connected him with Anderson.)

In Habeas Corpus, El Gharani's live video image was beamed from an unspecified location in West Africa into the Park Avenue Armory, where it was projected for roughly seven hours each day on a huge white "film sculpture," as Anderson calls it, approximating the size and form of the Lincoln Memorial in Washington, D.C. As the program text noted, the literal definition of habeas corpus, the legal term for a person's protection against unlawful imprisonment, is "you shall have the body." The installation does just that — albeit digitally.

Part of the piece's subversive power is the fact that, as a former Guantanamo prisoner, El Gharani is barred from entering the U.S. regardless of his innocence. Encountering Mohammed's image in the huge, vaulted space of the Armory's Drill Hall, once the site of U.S. military exercises, is chilling. He sits silently, in a t-shirt, slacks and fresh Brooks running shoes, looking like any young man anywhere, largely motionless and expressionless but for the occasional smirk or idle motion – thumb-twiddling, or the shifting of hands from thighs to belly – conjuring something of what solitary confinement might feel like. His body floats in the darkness, glowing, the only other light coming from a massive disco ball, suggestive of various stilled celebrations, and in one corner (the piece's sole uncertain gesture) a projection of what seemed to be cut-up fragments of El Gharani's story.

Mohammed's image breaks silence once each hour, when he goes off-camera in West Africa, and is replaced by his own pre-recorded mirror-image, recounting his tale in a remarkably matter-of-fact tone. The only other sounds in the hall come from another kind of sculpture: Six stationary electric guitars and amplifiers which belonged to Anderson's late husband, Lou Reed, emit a generative, steadily-modulated drone (reminiscent of Reed's notorious 1975 LP Metal Machine Music) controlled by sound artist Stewart Hurwood, sporadically broken by bursts of static and ambient elements, including wind and distorted surveillance audio. (At one point towards the end of Friday's viewing hours, a lone trumpeter moved through the hall, issuing plaintive notes.) The soundtrack is menacing and majestic, somber and strong, furious yet beautiful – like anger transmogrified into a wary, scarred bliss.

Two side room exhibits were footnotes to the main piece. In one, El Gharani straightforwardly recounts the narrative of his ordeal on a standard video screen. In the second room, a doubled miniature version of the drill hall sculpture presents a video loop of Anderson and her dog seated side by side, as Anderson tells a story involving her memories of September 11, 2001 (her Manhattan studio is a short walk from the site of the twin towers). The scale felt like a playful comment on the artist's effort to minimize her presence in El Gharani's story. At the same time, the accounts connected the lives of the two collaborators in the world beyond artwork, where the events of September 11th continue to resonate. 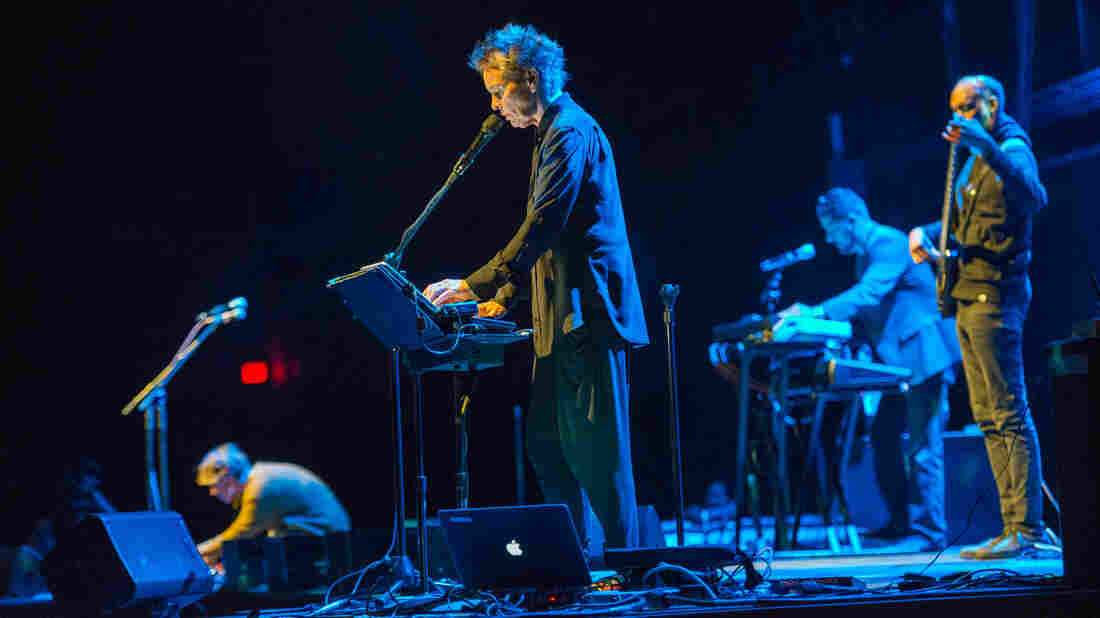 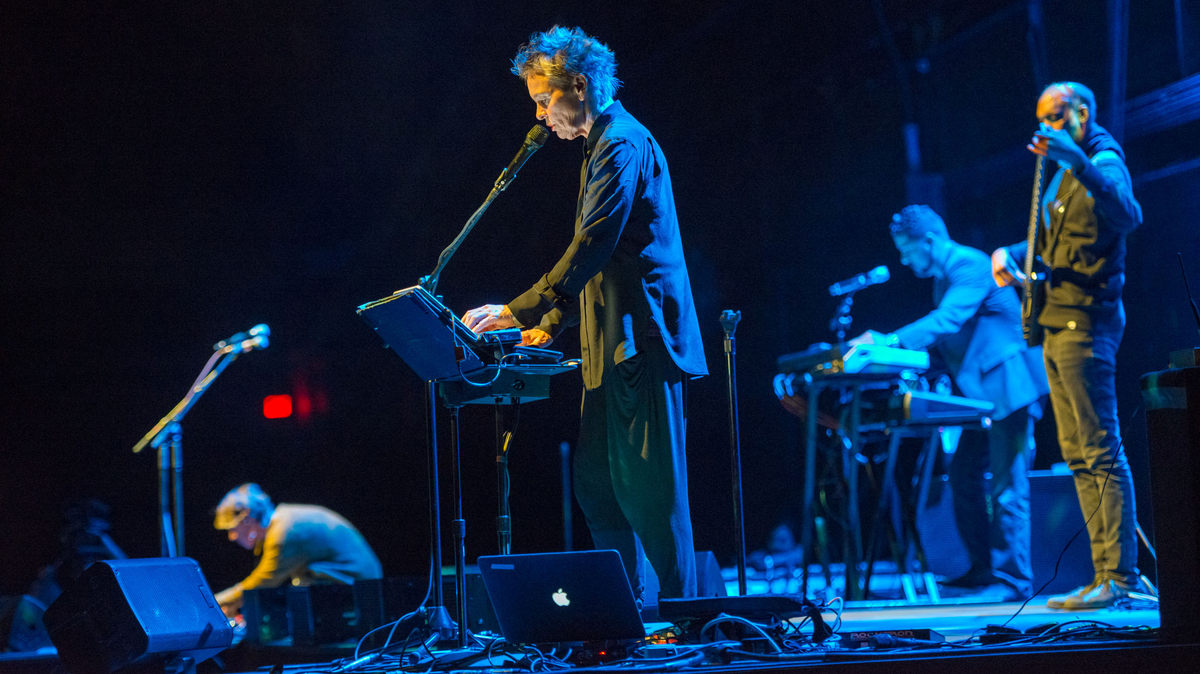 Laurie Anderson and her ensemble perform during the concert portion of Habeas Corpus on Friday, Oct. 2.

Anderson's monologue is an excerpt from Heart Of A Dog, her breathtakingly poetic and elegiac film about death, love and loss to be released this month. After what appeared to be a period of low ebb before and after the death of her husband (a central figure in Heart Of A Dog, although his name is never spoken), Anderson is experiencing a remarkable creative surge. Habeas Corpus, Heart Of A Dog, with its forthcoming soundtrack recording and Landfall, her recent multimedia piece with the Kronos Quartet, are among the most potent works of her career. There's a hard new clarity in her vision, and maybe a new impatience, with flickers of anger and sorrow where there was once an arched eyebrow. Credit the wisdom of age and experience, or the demands of the historical moment.

All of these were on display during Friday night's evening concert and "dance party." Anderson is best known as a musician, and in addition to an extended abstract piece with collaborators Merrill Garbus (of the avant-pop project tUnE-yArDs), and Shazad Ismaily, she performed "O Superman," the unlikely semi-hit single that, back in 1981, ushered her from the galleries and lofts of the art scene into the pop world. A haunting song whose electronic arrangement and processed vocals still sound futuristic, its lyrics have taken on new resonance since the World Trade Center attacks. Intoning the lines "here come the planes / they're American planes" from behind a small sound console, imploring a mother to hold her in her "military arms," there was less wryness, more world-weariness to her tone. As Anderson has said of the song, it was not predicting the future, merely describing the present. Sadly, that remains the case.

To cap the evening, Anderson's ensemble segued seamlessly from a freeform section into a beat-driven set by the Syrian electro-pop artist Omar Souleyman. It was, however, an awkward mood shift, with Souleyman, speaking little English, hoping to spur the audience to dance, to shift their attention from head to body. You couldn't fault the impulse: What, after all, signifies freedom and the resilience of the human spirit more profoundly than dancing? Eventually the crowd thinned, and the music had its desired effect on the holdouts, who swiveled hips and clapped along in the shadow of Anderson's towering sculpted screen, which, sans video projection, loomed like a huge ghost.