Accessibility links
Review: David Bowie's 'Blackstar' Is Adventurous To The End : The Record Bowie's final album was recorded in collaboration with jazz musicians and inspired by Kendrick Lamar. Even when it challenges, Blackstar resonates because it emphasizes emotion.

Review: David Bowie's 'Blackstar' Is Adventurous To The End

Review: David Bowie's 'Blackstar' Is Adventurous To The End 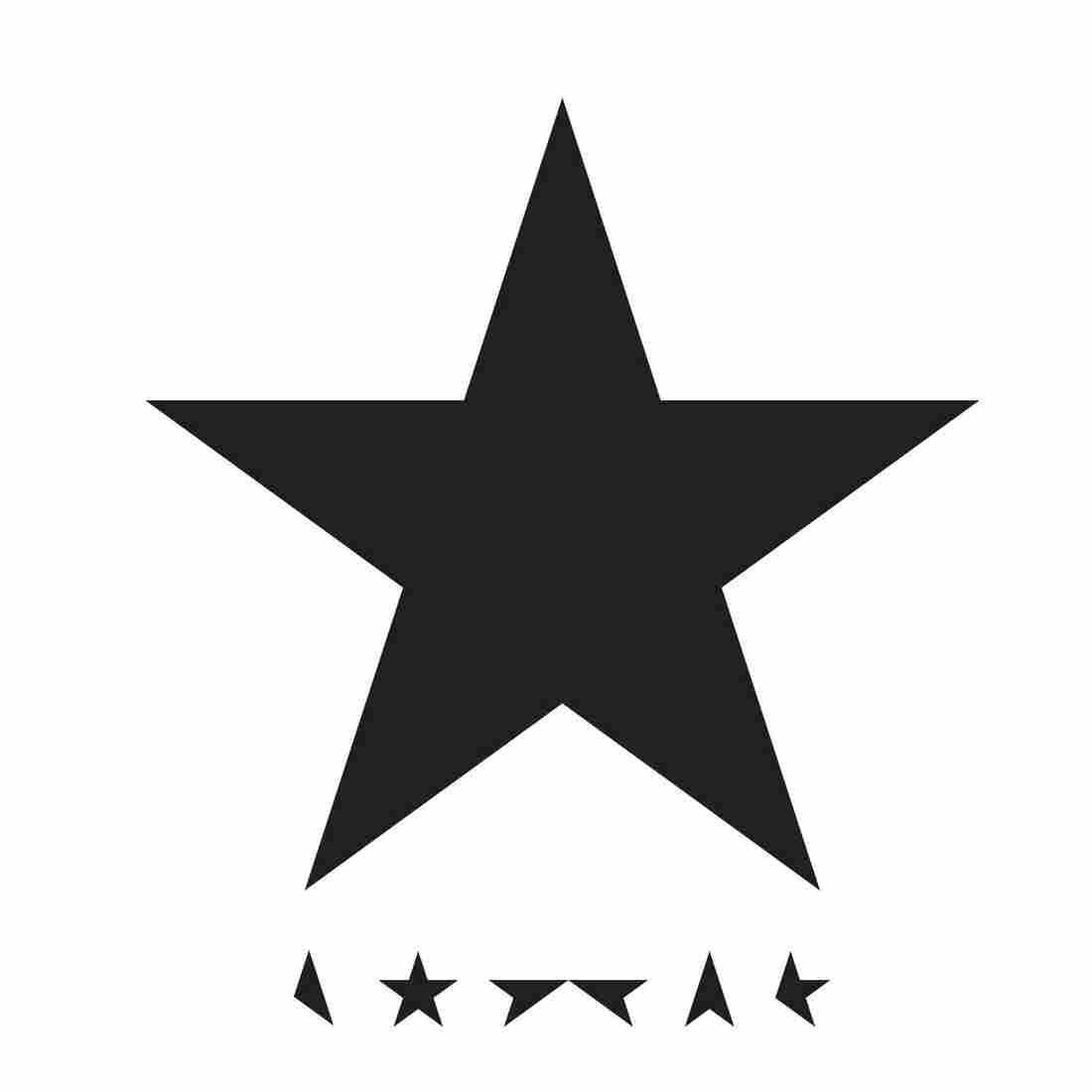 It could've gone so terribly wrong.

According to Tony Visconti, David Bowie's longtime producer and mouthpiece for the final few years of his life, the English expat wanted to embrace manifold styles for his 25th album, ★, aka Blackstar, released last Friday. Pop's original chameleon had of course been doing that for 50-odd years, and so for this last time around, he aimed to omit the very music upon which he began. "The goal, in many, many ways," Visconti claims, "was to avoid rock & roll." 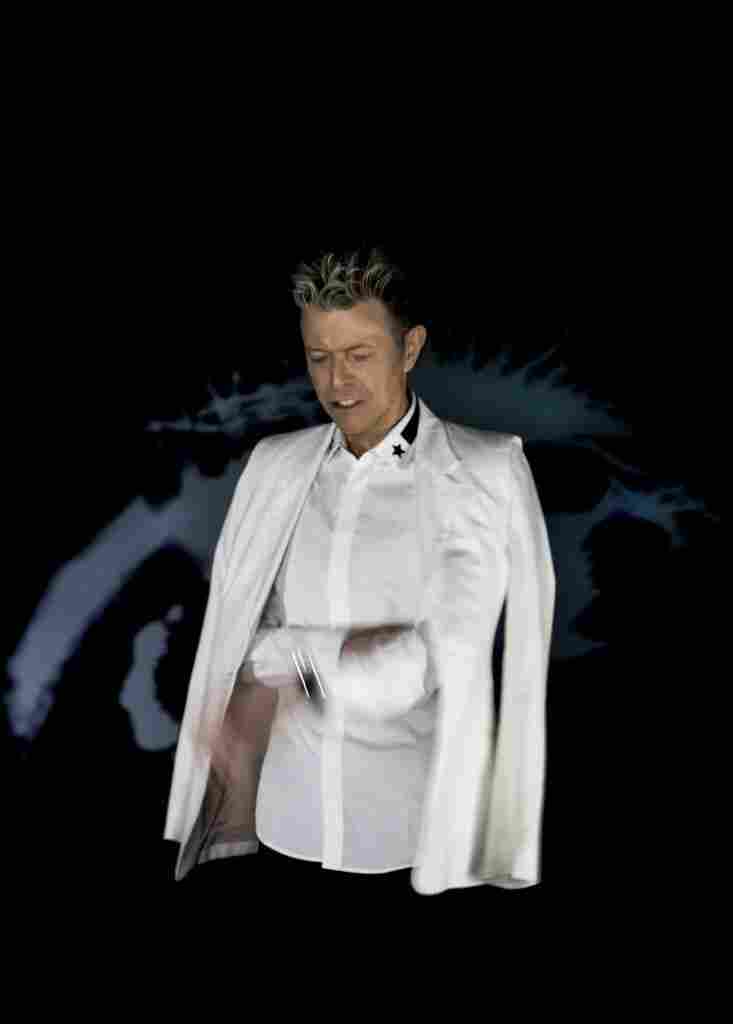 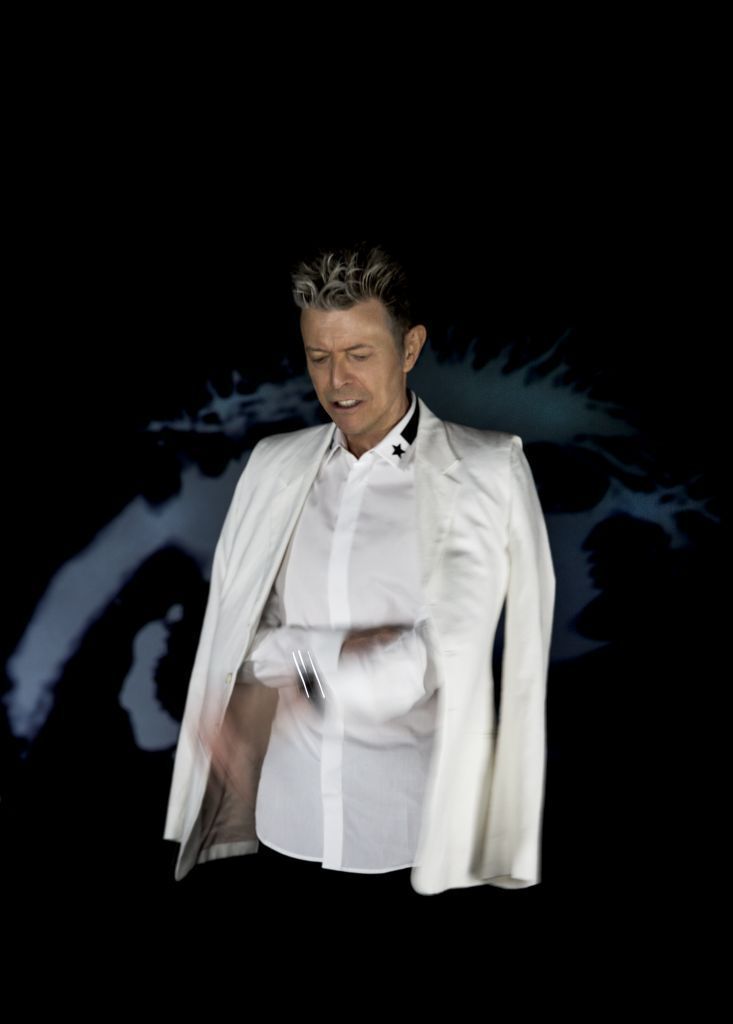 There's a lot of that going around: Check the latest Coachella lineup beyond Guns 'n Roses. But rather than revisiting his synth-heavy Low/"Heroes"/Lodger trilogy like so many of his followers and he himself did on 2013's The Next Day, Bowie turned to a nearly forgotten genre that hasn't in decades attracted a superstar — jazz fusion. Having enlisted saxophonist Donny McCaslin and his trio — keyboardist Jason Lindner, bassist Tim Lefebvre and drummer Mark Guiliana — here augmented by another veteran on the NYC jazz scene, guitarist Ben Monder, Bowie updated the technical rigor and tonal fervor of '70s Miles Davis with the kindred adventurousness of electronic music.

The dexterity of the form set Bowie free to be as musically unconventional as he had so often been visually. McCaslin shares Bowie's taste for hybrids; he is perhaps the sole Grammy-nominated jazz soloist to cite Aphex Twin. On his last solo jam, 2013's Hydra, Monder conjures the prog-rock majesties of Yes at its most labyrinthine and sprawling. With seven songs totaling 41 minutes, Blackstar similarly stretches out sans compromise.

Bowie's leap into full-on jazz muso fantasia for his swan song may seem out of character unless you consider this: As much as he paved the way for punk, synth-pop and other now-ubiquitous forms where passion triumphs over training, Bowie had long championed virtuosos: The three records most responsible for translating his overseas success to the U.S., "Space Oddity," Young Americans and Let's Dance, featured, respectively, Rick Wakeman, Luther Vandross and Stevie Ray Vaughan — all of them years before they became stars. Along the way, he had worked with such diverse and distinctive players as Mick Ronson, David Sanborn, Earl Slick, Brian Eno, Robert Fripp, Adrian Belew, Roy Bittan, Nile Rodgers and Peter Frampton. Beyond that marquee, he employed such musician's musicians as Mike Garson, Carlos Alomar, Lenny Pickett, Reeves Gabrels, Tony and Hunt Sales, Lester Bowie, Gail Ann Dorsey, Tony Levin and Sterling Campbell. And he often highlighted these heavyweight cats — sometimes to the detriment of his least composed, most overproduced efforts like Never Let Me Down and Tin Machine II.

Although it also favors performance over melody, Blackstar is otherwise nothing like those. It's not even akin to "This Is Not America," Bowie's first jazz collaboration. That one-off 1985 single with the Pat Metheny Group was Bowie's most delicate, thoughtful, and well-written achievement during what he now refers to as his phoned-in "Phil Collins years." Blackstar, by contrast, is feral, instinctive, the most out-there dispatch from the guy who celebrated his 69th birthday last Friday and left this Earth on Sunday as rock's most radical superstar. You could use it to end a party that's gone on too long or impress a boomer neighbor whose taste hasn't changed since the heyday of Mahavishnu Orchestra; it's that brutal and finessed.

Bowie himself honked sax, and so it makes sense that he would choose a parallel player and his band to further the most fertile, forward-leaning elements of The Next Day. As wise and world-weary as only Bowie in his 60s could be, that album drew on his past, right down to its cover art, to unintentionally emphasize an unfortunate point: Bowie's impossibly long plateau — when he set the standard for experimental pop during the '70 and early '80s while switching up his game like changing his costume — ended exactly when he became megafamous with 1983's Let's Dance. What makes Blackstar so startling is that it approaches the magnitude of Bowie's golden years without reminding us that he stopped routinely pumping out world-class songs on the level of "All the Young Dudes" and "Heroes." And it does that because Blackstar isn't about songs at all. Sometimes it's not even about David Bowie, except, when it is, undeniably, about David Bowie, like on the title track and "Lazarus." The latter is one of the new numbers mixed with the old in his current off-Broadway musical of the same name, which every theater critic, even the bright ones, has deemed inscrutable.

Blackstar resonates precisely because it favors emotion over meaning. Lyrically, it's harder to follow than 1974's famously obtuse Diamond Dogs, when Bowie first adopted William S. Burroughs' random cut-up approach and announced that his output wasn't rock 'n' roll but genocide. Having led the dystopian way for decades, Bowie had to go so far out on a nonsensical limb to invoke ineffectuality that on "Girl Loves Me," Lady Gaga's dada mixed Polari — old-school English criminal/showbiz/gay slang — with Nadsat, the fictional argot from A Clockwork Orange. Unlike Dogs, the result does indeed come across as gibberish except for a shell-shocked squeal of "Where the f*** did Monday go?" so ear-bending you can bet MCs will either soon be vying for sample rights or drop it in their mixtapes regardless. It's catchy not because it's written that way, but because Bowie here sounds utterly bonkers.

That bit and its walloping, hip-hop beat suggest Visconti wasn't just fishing for hipster cred when he told Rolling Stone, "We were listening to a lot of Kendrick Lamar." Crate-digging DJs have long feasted on abandoned jazz-fusion joints the way archaeologists dig bones; Bowie and Visconti returned the favor by generating their own 21st century post-post-bop amalgam. It's Lamar's sense of freedom — as well as his willingness to kick against the pricks — that surely served as spark.

When Bowie's buzz began, his theatricality — rooted not in African-American signifiers of authenticity but in such unapologetically hammy and idiosyncratically English actors as Anthony Newley — so rankled many American critics that some argued Bowie couldn't sing at all: They accused of him of being an impersonator of real vocalists and a faker of real feeling. But this same knack for transcending his ever-changing source material, imbuing it with pathos, and simultaneously playing it for scenery-chewing effect made him the first postmodern pop star; an achievement for which he has long been revered. That turned out to be a huge weight to carry, much less translate for an audience that swelled for his "plastic soul" when MTV, the ultimate platform for it, arrived.

Blackstar disengages with all that while reflecting on it. Having secretly struggled with cancer for the past 18 months, Bowie couldn't roar through the entire album while constantly generating his usual quotation marks. This didn't entirely halt his thespian razzle-dazzle, which he reprised with aplomb on "'Tis a Pity She Was a Whore." Equipped with Eric Dolphy-esque sax screams, it suggests Flying Lotus remixing The Threepenny Opera, right down to its Brecht-ian distancing effects of misogyny alternately colloquial and archaic: "Black struck the kiss, she kept my cock / Smote the mistress, drifting on."

But he did cut back on his proscenium-trained enunciation, instead moaning in head tones the showboating licks he long belted from his gut and then flipped with a self-aware flourish, like when he'd go toe to toe with Freddie Mercury or Mick Jagger. Age and illness gave Bowie's voice gravity, and McCaslin's sax wails when he could not, particularly on "Lazarus," which suggests the post-punk sorrows of Joy Division crossed with Serge Gainsbourg's bass-soloing chamber music. "I've got drama, can't be stolen," he knowingly boasts. "Everybody knows me now." Spectacle lingers, but it's centered on disquieting, dizzying sleaze that spirals like sludge down a drain. Rather than celebrating the celebrity that entrapped him and compromised his art, he likened it to satanic ritual, spiritual emptiness, theoretical constructs of the solar system and, ultimately, racial disconnect.

"I'm not a white star / I'm a black star," he canted on the title track. A man married to a Somali-American woman couldn't sing those words and merely be evoking Major Tom one last time; it's likely he lied here to illustrate the uncomfortable truths of contemporary pop's minstrelsy. Printed black on black lyric sheets, his words once again reveled in alienation from the norm, the sort of identification that endeared him to Soul Train's audience the way Morrissey's fixation on sweet and tender hooligans charms a Mexican-American one. Males of alternate masculinities are their own minority; here Bowie's estrangement from his gender flashed with overt violence in his murder ode "Sue (Or in a Season of Crime)," where Guiliana skewers jungle's hyper funk with irregular beats and accents that emphasize ensemble performance, not studio-sampled perfection. Bowie seethes with resentment in his downcast "Dollar Days," the closest this rigorously abstract album comes to a conventional ballad. "I'm dying to push their backs against the grain / And fool them all again and again," he daydreams as the band reigns in its fury and the key gently descends.

Middle Eastern dissonance, Krautrock's post-war anxiety, European art song, post-punk dirge and black fusion groove from white jazzbos — they're all here in Bowie's polyglot funk farewell. Their darkness highlighted the rare moments when his tunes turned sweet, as they did in the lingering refrain of the culminating cut, "I Can't Give Everything Away." "Saying no but meaning yes / This is all I ever meant," he confesses before McCaslin takes his most emancipated solo, one that Monder echoes with slow-burning Fripp-ian flight in Blackstar's closing moments. There's always been joy caught up in Bowie's paradox; finally let loose here, it's simply ravishing, regardless of his usual lyrical ambiguity. Was he trying to suggest that the antagonism of his stance elsewhere on the album — and, indeed, throughout so many highlights of his career — was always intended as love? Not the side effects of the cocaine? Either way, even while staring down death, Bowie here reversed his claim on "Station to Station" so many years ago: It's never too late to be grateful.