Accessibility links
Taylor Swift And Kendrick Lamar Lead 2016 Grammy Awards : The Record The 58th annual awards brought forth a lot of winners, but no sweeps. 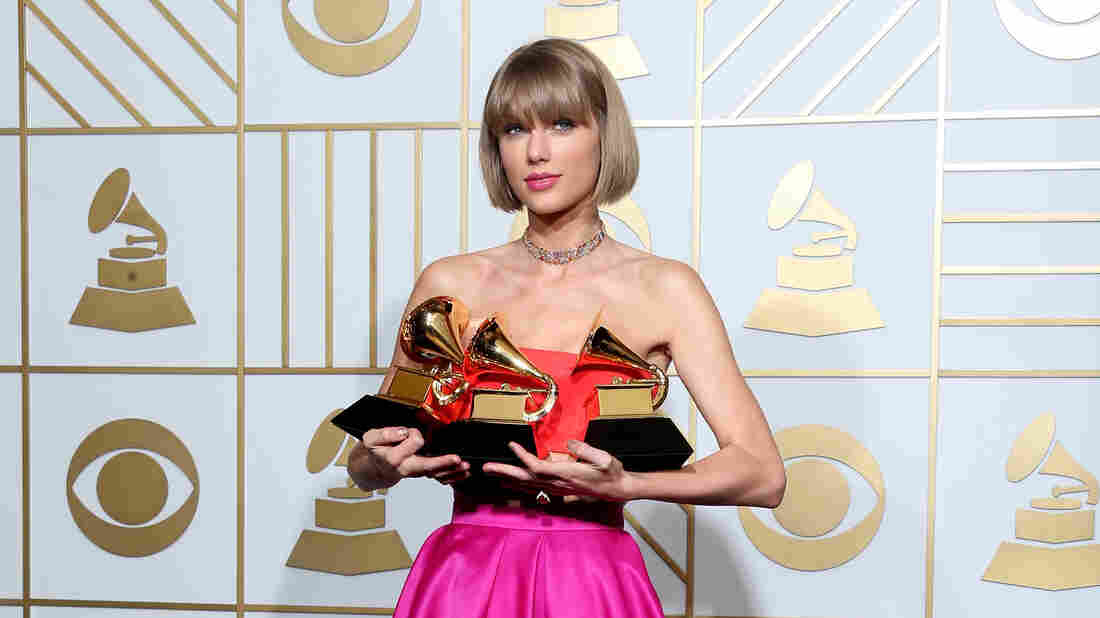 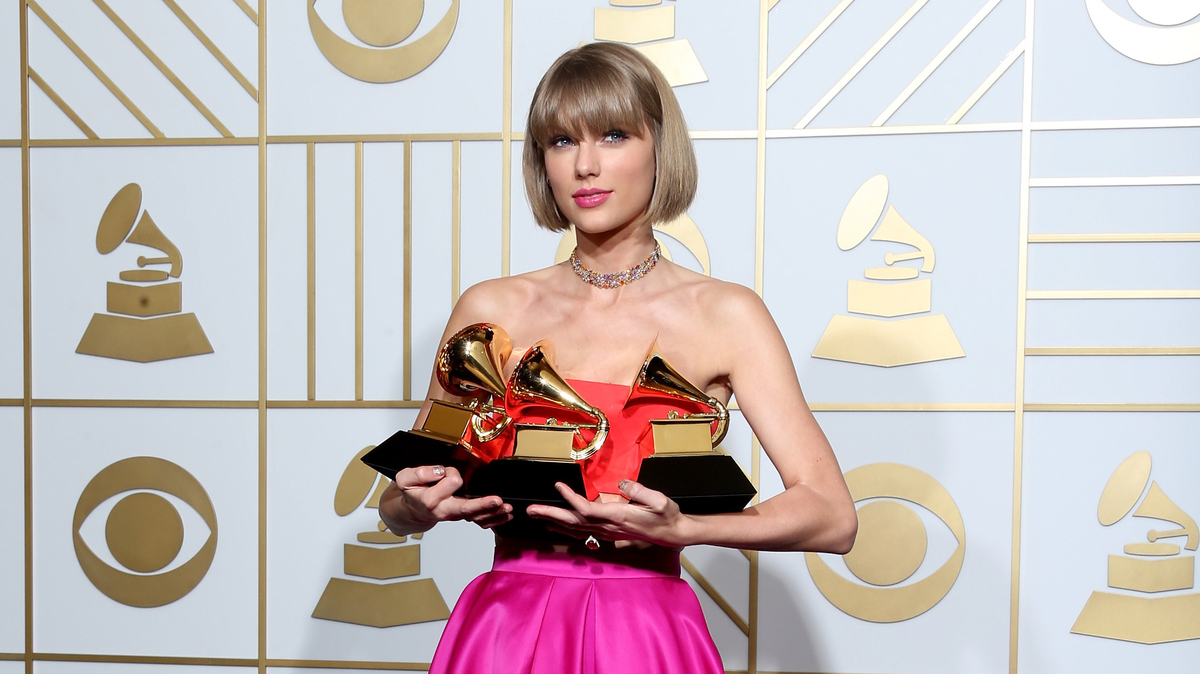 Taylor Swift won three Grammy Awards, including Album of the Year, for her album 1989.

It seemed like there was something for everybody at the 2016 Grammy Awards. Mark Ronson's high-spirited "Uptown Funk," featuring Bruno Mars, won Record of the Year. The songwriting award, Song of the Year, went to Ed Sheeran and Amy Wadge's "Thinking Out Loud," while Taylor Swift won Album of the Year for 1989.

The nominations for the 58th annual Grammy Awards, though, were pitched as something of a showdown between pop and hip-hop. In certain ways, neither won outright — but both genres' reigning queen and king emerged as winners.

After a long-anticipated battle between Taylor Swift's sturdy, sunny pop songs and Kendrick Lamar's fiercely political and musically expansive hip-hop for top prizes, Swift walked away with the night's biggest prize, Album of the Year — as she noted, becoming the first female artist to win that award twice. She also won Best Pop Vocal Album. Together, Swift and Lamar shared the Best Video award for "Bad Blood." 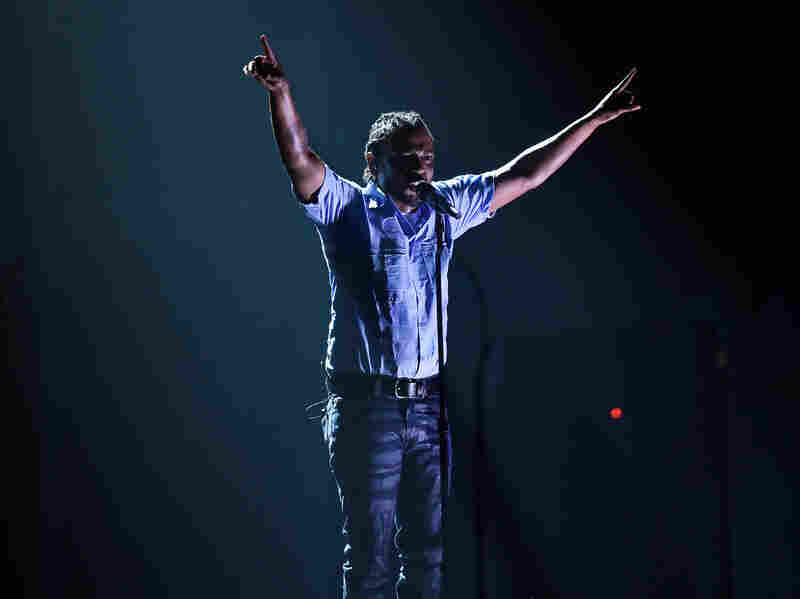 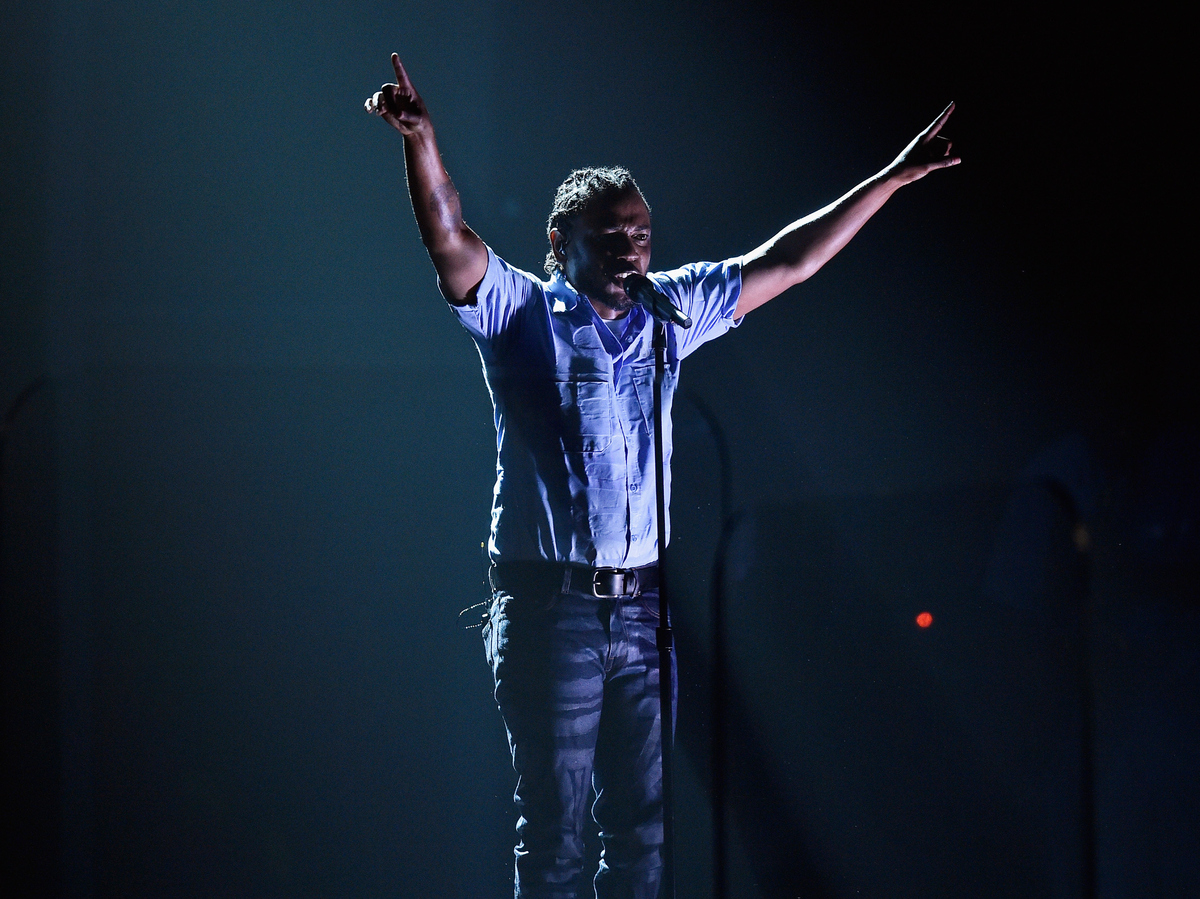 But although Lamar didn't leave the ceremony with any of the Recording Academy's "big four" prizes (Album of the Year, Song of the Year, Record of the Year or Best New Artist), he did go home with five statues. His album To Pimp a Butterfly won the first award presented on the telecast, Best Rap Album, while his song "Alright" won Best Rap Performance and Best Rap Song. "These Walls," featuring Bilal, Anna Wise and Thundercat, won Best Rap/Sung Collaboration; the fifth Grammy was for his video collaboration with Swift, on her song "Bad Blood."

Hip-hop also took center stage in the win for Best Musical Theater Album, an award not usually presented during the evening telecast. It went to the rap-fueled musical Hamilton, written by Lin-Manuel Miranda, who rapped his acceptance speech. The show's cast performed Hamilton's opening number from the stage of the Richard Rodgers theater in Manhattan. Kendrick Lamar also gave electrifying performances of his songs "The Blacker the Berry" and "Alright"; together, the Lamar and Hamilton performances were the soul and fire of the telecast.

Pentatonix — the vocal group who surpassed 1 billion YouTube views in 2015 — took home the award for Best Arrangement, Instrumental or A Capella for their version of "Dance of the Sugar Plum Fairy," from Tchaikovsky's ballet The Nutcracker. The group also teamed up with legend Stevie Wonder during the telecast for a a tribute to the late Maurice White of Earth, Wind and Fire, who died earlier this month.

The prize for Best Album Notes generally goes to a music scholar or critic; this year, the winner was singer/songwriter Joni Mitchell, for her notes for her multi-disciplinary project Love Has Many Faces: A Quartet, a Ballet, Waiting to Be Danced, which includes 53 songs, a book of poetry and autobiographical writings, as well as reproductions of six of her paintings.

Wild swings between what's comfortable and what's actually artistically current — or even forward-looking — are familiar to longtime Grammy voters and observers, myself included. I was a Grammy voter for quite a few years, and a member of what is now called a "special nominating committee" for one of the specialized categories of certain Grammy awards. (For most categories, any recording can be submitted for nomination; in a few, however, those committees decide which five recordings should be nominated.)

Some of the Recording Academy's more tone-deaf choices may be attributable to how the voting is intrinsically structured. Grammy voters are allowed to self-select the categories they vote in. Not so long ago, members were allowed to vote in a maximum of nine out of 31 genre fields, plus vote for four prizes that any voter was allowed to vote for: Record of the Year, Album of the Year, Song of the Year and Best New Artist. As of 2011, however, the Recording Academy made it possible for voters to vote in up to twenty different genre fields, plus the four "big" categories of Record of the Year and so forth. The unfortunate consequence of that setup is that it's very easy to vote for a particular ticket, so to speak, and help boost the chances of a friend, colleague, label mate or someone else known through industry connections.

In addition, voters are supposed to limit themselves to genres that they are actually knowledgeable about. In practice, however, being able to vote across so many genres may account for some musicians winning certain awards year after year simply due to name recognition. One famous example: Bob Marley never won a Grammy (though he was given a posthumous Lifetime Achievement Award), but his offspring Ziggy, Stephen, Damian, Cedella and Sharon have won Grammys for 11 albums in the reggae category.

Due to the Recording Academy's eligibility requirements, several artists and albums that have enjoyed enormous waves of critical and commercial success won't be under consideration for Grammys until February 2017. For example, on tonight's telecast, singer Adele performed "All I Ask," a song from her new album, 25. Despite its massive commercial success, 25 wasn't eligible for Grammy consideration this year, because it came out in November; only albums released between Oct. 1, 2014, and Sept. 30, 2015, were considered.

And for the same reasons, much of what is dominating the current cultural conversation — Beyonce's "Formation" video and her performance at the Super Bowl, Kanye West and Rihanna's recent albums — had no chance of making an imprint at this year's awards ceremony.

The telecast's producers tried to inject some currency into the three-and-a-half hours of broadcast: Vocalist Lady Gaga and guitarist/producer Nile Rodgers led a medley tribute to the late David Bowie and his many artistic avatars. Tributes filled most of the last hour of the show's telecast, fulfilling the Academy's long-standing tradition of putting together multigenerational powerhouse nods to deceased artists, in part to pay homage and in part to fill up much of the telecast's long evening. This year's most true-to-Grammy-form example was a performance in honor of the late B.B. King, fronted by Bonnie Raitt, Gary Clark Jr. and Chris Stapleton.