Accessibility links
DJ Dahi: Making The Move From Bass Line To Top Billing : The Record "My goal with this music is to not to have to be less of myself when I see people." says DJ Dahi, who's produced tracks for Drake, Kendrick Lamar and Tinashe. 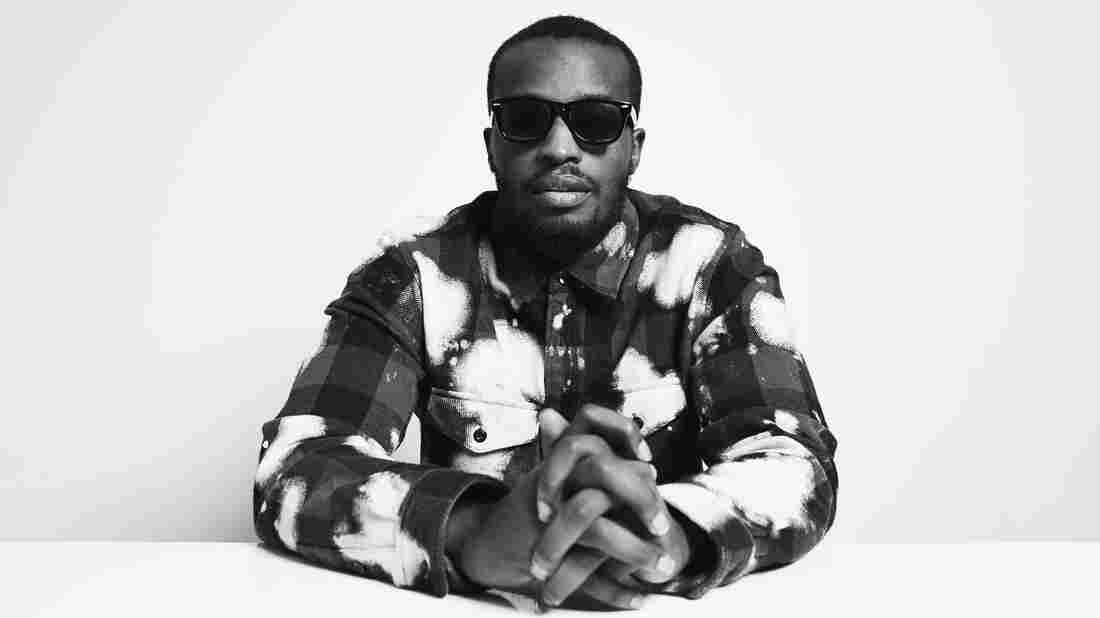 "We live in an 808-driven world," DJ Dahi says. "Having a live bass line on a record gives it something that you can't take away." Courtesy of the artist hide caption 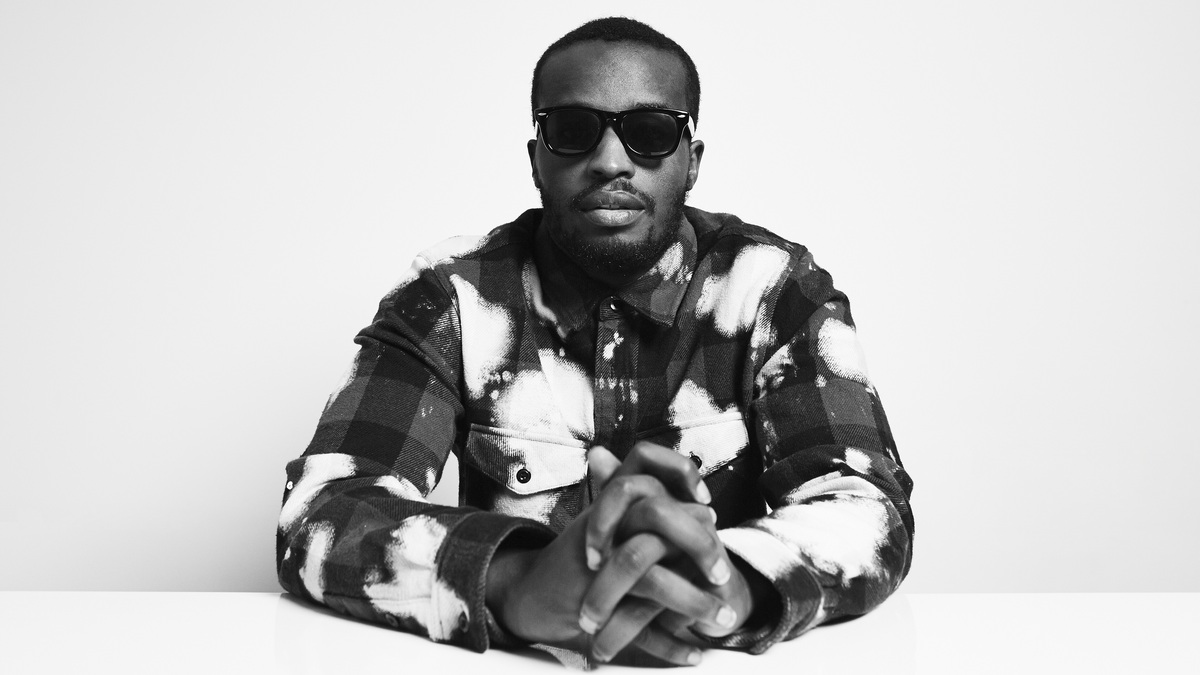 "We live in an 808-driven world," DJ Dahi says. "Having a live bass line on a record gives it something that you can't take away."

"You can learn everything on YouTube now," says DJ Dahi grinning like that's his secret. He's sitting at the main console of his recording studio in the San Fernando Valley in Los Angeles. There are instruments scattered around the space, including a pack of harmonicas, which is what he happens to be learning right now via web tutorials. "I was listening to 'Clint Eastwood,' from Gorillaz, and that harmonica's cold! So I went to Guitar Center and bought a pack."

The nondescript studio out of which the 32-year-old Dacoury Natche operates is a cozy, windowless place, where time flies by without the people inside even noticing. It's a messy place, with a half-full, warmed-over iced Starbucks drink sitting on the coffee table, an empty Hennessy bottle not too far off, and the critically acclaimed Nina Simone documentary What Happened, Miss Simone? paused on his TV screen (he was watching for inspiration). Only a dry-erase board's to-do list hints that the sounds being recorded here are the envy of the industry: "Send ideas to Bruno Mars." And "Beats to Chance [the] Rapper."

This is the place where Dahi mined gems for Compton, Dr. Dre's 2015 surprise album on which the young producer landed three credits. He earned that gig by creating iconic tracks for Kendrick Lamar ("Money Trees," one of the stand-outs from 2012's Good Kid, M.A.A.D. City) and Drake ("Worst Behavior," from 2013's Nothing Was the Same), and then continuing that roll into a reputation. He's also cranked out huge tracks for Big Sean (his colossal 2014 kiss-off, "I Don't F*** With You") and Madonna (five production credits on Rebel Heart), as well as collaborated with promising upstarts from Travi$ Scott ("Mamacita") and Tinashe ("Bet") to Vince Staples and Kelela.

And even as Dahi's critical renown and his stature within Los Angeles' creative community of bourgeoning and star-level black musicians (whether he's backing Lamar's Black Hippy rap crew or building with elite instrumentalists like Thundercat and Terrace Martin) grows, it's another project that's foremost on his mind at the moment: The Good Seed, an album he's currently recording that he hopes will propel him to the front as an artist. It's due on Def Jam this summer.

Natche has come a long way in a short time. Though he always remembers having a passion for music — drumming from an early age; listening to his step-father's jazz or Marvin, Curtis and Al Green records; spending his Inglewood youth playing the tenor saxophone in middle and high-school orchestras (at one point, Dahi considered auditioning for the music program to Cal State-Fullerton). "I did not know if I wanted to devote my life to making music," he says. At Oakes College at UC-Santa Cruz, where he majored in film and American studies, he learned to DJ ("how to mix records and kinda rock a party, catch the vibe of the people"), yet he was still unsure of his life's creative direction. He went up to San Francisco and worked as the resident director of an art school there for a couple years and he went to audio-engineering school, finally throwing himself into music in the late Aughts.

Upon returning to Los Angeles in 2007, Dahi started using the Acid Pro program on his PC, emulating producers like 9th Wonder and Just Blaze "because of the grooves and the pocket of drums they'd use." Dahi grew up with big ears, listening to jazz and soul and Pearl Jam. "I was trying to mix worlds, incorporating genres I like into hip-hop," he says, "figuring out how that can be made into a rap record." This idea has stuck: the track for "Money Trees" was inspired by Beach House's "Silver Soul."

Before hip-hop icons and chart-toppers became clients, Dahi served his beats to local rappers. "There was this spot called Grand Star in Chinatown that would have these hip-hop nights," he remembers. "You'd meet all these new people there on a Friday night. You'd also have people that'd hang out on Fairfax Avenue. I would see Dom Kennedy going to [sneaker store] Flight Club. I remember Kendrick opening up for Pac Div at The Roxy downtown, years ago. He was excited because he was a big fan." By 2012, they all got music from him.

Dahi has now crafted his own sound, one focused on playing live instruments himself — bass guitar, keyboards and percussion, in addition to the MPC — and heavy on melodies. "We live in an 808-driven world," he says. "Having a live bass line on a record gives it something that you can't take away."

As an example, take Travi$ Scott's "90210," the second half of which is a quintessential Dahi production. With its crawling strings and clip-clop beat, the track plays like a tense scene in an old Western, but underneath it all is Dahi's laid-back bass line plucking away and grounding a manic Scott. His current favorite work is on Compton's "All in a Day's Work." That's it, beneath the tambourine. "Other instrumentalists that worked on [Compton] came up to me and said it's one of the baddest [pieces of playing] on the album," Dahi says proudly. "It gave the record soul." Simple to say, yet hard to pull off.

The Good Seed also has an uncomplicated goal: stop lying. It comes from Dahi's desire to address things that disgust him about pop music and pop culture, and by extension, the culture at large.

"I was really inspired by watching the [2015] MTV Video Music Awards show — Kanye's acceptance speech about listening to kids. It made me think about the kids who were also watching it. Are we giving them information that's vital to their upbringing — or are we lying to them? I want to give kids a sense of the world through not only my eyes, but through the eyes of artists they love." That means less celeb bickering and trivial boasting, and more thoughtful direction for an audience that Dahi feels has been led astray.

"I want the album to be about honesty, positivity and truth," he says with straightforward conviction, trying not to sound preachy. The task is, of course, infinitely easier when a few of today's best and most thoughtful rappers are his messengers. The producer is wrangling Lamar, Staples and J. Cole, among others, for Seed.

The guest MCs appearing, says Dahi, will inject the music with dosages of social commentary and self-awareness that will pack punches for radio, parties and conversation. He says he'll allow few bars to be wasted on clichés about cash, cars and sex. "There will be an intelligence behind it. Rap was just real hard before. Now you can feel that hardness and that intelligence. Artists are explaining why things are so hard."

The narrative steering Dahi provides is musical context. "A lot of artists don't know what the hell to talk about when they get into the booth," he says. "They're really in there just searching, trying to hit a home run with no one pitching. It's important that I give them the setup — 'This is how I need it to feel' — a spark so that the train can get in motion."

Dacoury Natche's mission is the direct byproduct of an upbringing he describes as "super Christian." When Dahi, the eldest of six, was born, Dahi's mother Amy Martin led a home ministry that met several times a week. (The Good Seed is named after his mother's old L.A. plant store of the same name, which was inspired by Bible readings.)

"We gave ourselves solely to the word," Martin explains, during a phone call, of raising her family.

Learning to live for a Christian calling affected not only the way her son appreciated the world around him, but also who he's grown to love musically. Dahi gushes about reggae legend Bob Marley: "He was willing to die for his music and his message."

"Nowadays people are afraid to have a message in their music in regards to what's happening in the world. Who's going to say something? My goal with this music is to not to have to be less of myself when I see people. I want to be able to walk outside and be able to defend everything I created for it."

"Like, what are we doing?" It's a rhetorical question Dahi's asking, though it's hard to tell. It really does sound like he wants an answer from every artist that's ever held a microphone in front of an audience.

"We hit it off," Dahi remembers of their first meetings this time last year in LA. "I've been wanting to make an [artist] album for a couple of years now. As a producer, you're behind the creative process; but it's not like back in the day when you'd have, say, a Quincy Jones, who would produce all these major artists and then have his own album. I wanted that. I told No I.D. and he said, 'Let's do it.'"

"I see greatness in him," says Wilson. The mission Dahi has taken on doesn't daunt the industry veteran, nor make him fearful that marketing such an album may prove difficult. "His perspective is important. Nobody was calling [positive messages] preachy when MCs were walking around with Africa medallions and being conscious in the '90s. When this generation gets that balance, that's what will really make me happy. It's more than possible to say something positive without being corny."

Back in the studio Dahi runs through rough drafts of potential Seed tracks. There's a hard-hitting one he envisions being called "No," about staying true to yourself, which he hopes ScHoolboy Q will tackle. Another song, "Home," features contributions from singer Sam Dew and is about connecting with family. Then he plays a cut featuring a slick bass line and vocals from Jesse Rutherford, frontman for The Neighbourhood. It's called "High," and it's about smoking weed, which Dahi doesn't do anymore. But the indie rocker does, so they talked about it and out came a song. "I don't find any blasphemy in it," says Dahi, in regards to marijuana intake.

At 60, Ms. Martin admits that she's not really into the songs her son has produced for others, mostly for "mom" reasons — too much vulgarity and such. She does admire the empowering project of The Good Seed, offering up this variant of Bible verse Psalms 127:5 when I ask her about the rap music business: "The children shall speak to the enemy at the gate."

"That's my baby," she says proudly.

Getting back to work, Dahi turns to his MacBook. If he's going to travel in the path of his idols, he's going to have to crank out something special. Before fully re-immersing himself into bass lines and roughs, Dahi adjusts the Milwaukee Bucks cap resting on his head and tosses up a prayer. "Lord willing, it'll happen."