Accessibility links
Jamie xx On Vinyl, DJing And Hunting For Records : The Record The easiest way to understand the music of Jamie xx, a producer and DJ whose dance-inspired beats are tempered with reserved atmospherics, is to accompany him on a crate-digging excursion.

Jamie xx And The Value Of Other People's Music

Jamie xx And The Value Of Other People's Music 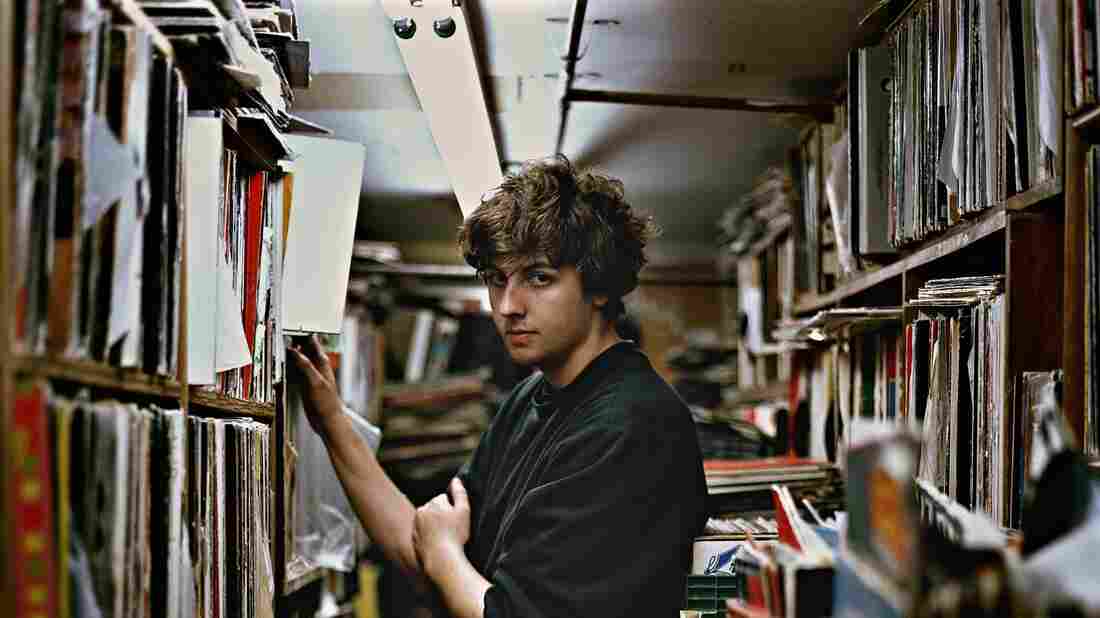 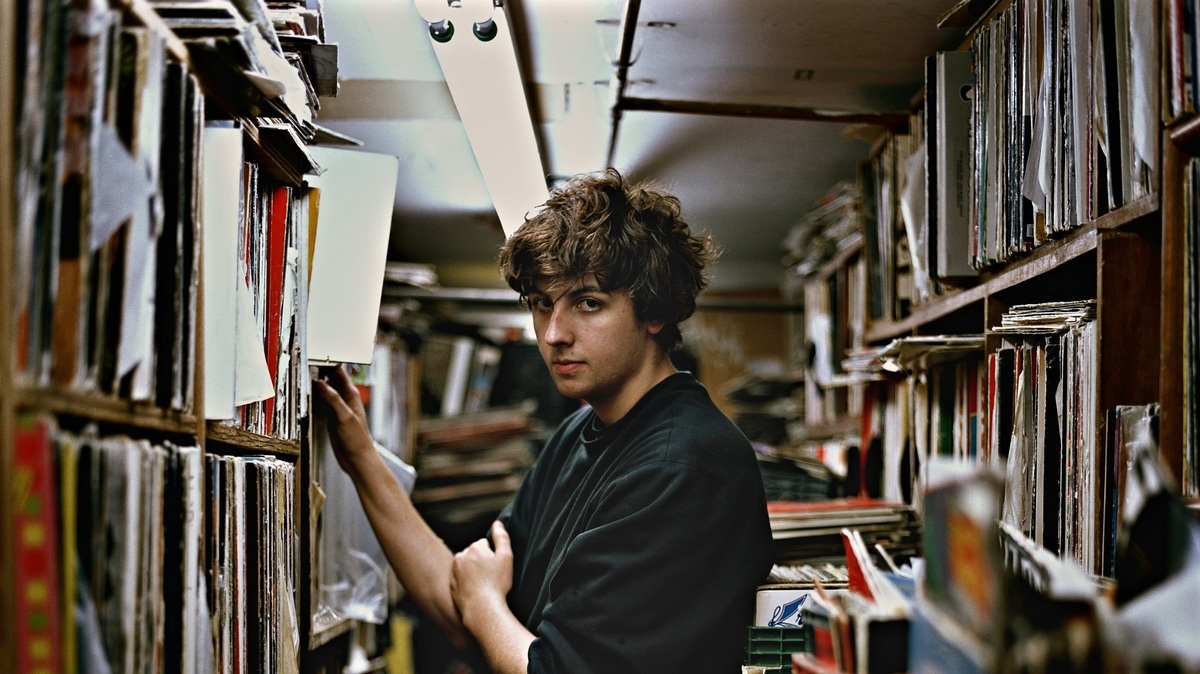 Jamie-James Medina /Courtesy of the artist

Last summer, I found Jamie xx in a New York record store by design — both his and mine. The then-26-year-old electronic producer born James Smith was in the midst of his first full-fledged solo headlining tour of the U.S., following the release of the hit album In Colour; and since scouring record stores was among his primary downtime activities in each town he visited, the idea was that Jamie would report from a few tour-stops to discuss the records he found at, say, Gramophone in Chicago, or at the Underground Resistance store in Detroit.

The activity also dovetailed with the nature of the tour: Jamie was on the road as a DJ. This was partly because In Colour's club-music vibe lent itself to a night of records, not live instruments, and partly because, as he himself said to me, "I already have a band" (referring to The xx, the Mercury Prize-winning, South London indie-electronic trio). There was also the matter that Jamie is a phenomenal DJ, fluently mixing musical styles and eras — by year's end, this was loudly acknowledged when he was voted onto Resident Advisor's influential DJ Poll. Still, the notion that a member of a popular group was DJing rather than playing live confused both critics ("Producer w/own music...spins trax by others? Is this what musicians do?" asked Wall Street Journal's Jim Fusilli in an online debate following Jamie's Coachella set) and some of his own audience (Caius Pawson, who runs Young Turks, the London label that Jamie and The xx record for, and who supported Jamie on the tour told me, "We were losing about 15-20% of the crowd in the first half an hour [of the show]"). Despite the form being well over 40 years old — and the fact of hip-hop, a musical culture partially born of playing records, has become a global force long ago — the idea of DJing as an accepted musical expression still seems novel in many circles.

This is that much more surprising considering how large a critical and commercial hit In Colour, a great pop album wholly created with a DJ's ears, was already in the process of becoming. By the end of 2015, it had spawned dance, hip-hop and indie hits (most prominently "I Know There's Gonna Be (Good Times)," a collaboration with the rapper Young Thug and the reggae crooner Popcaan), selling 120k copies (incl. streaming equivalent), earning a Grammy nomination and placing on countless year-end lists. In fact, the breadth of the album's musical scope, the diversity of its audience and the level of its success proved Jamie xx to be in a unique position for a contemporary artist, beautifully stuck in a creative space between the media futurism of digital natives and the nostalgic throwback of the vinyl archivists, while appealing to them all. And all this was reflected in the meticulous nature with which Jamie kept digging through those stacks at East Village's A-1 Records, one of the city's best stores for "DJ tools" of all types, belying a knowledgeable, inquisitive and guarded sense, but also a process that was clearly connecting and connected — both internally and when he put these musical thoughts to tape.

When we left, Jamie showed me a trio of finds: two 12"s (Cloud One's "Spaced Out" and the "special extended version" of Booker T's "Don't Stop Your Love"), plus a copy of trumpeter Hugh Masakela's album I Am Not Afraid. I asked him if there are sections of a store — genres, formats, searching for particular records — that he gave special focus to. "I just try to look through everything," he said. "It's quite fun to search through all the other bits I know very little about. That's the way I discover things." Meditative at all? I asked. Jamie's eyes lit up for probably the only time in our few conversations: "Definitely!"

In many ways, James Smith was born into this position. Growing up in West and South London, his parents always had records around (Nina Simone, Otis Redding, The Crusaders), and two of his uncles were DJs — one playing at bars around New York City in the '90s ("house music and lounge-influenced stuff"), the other on the radio, at a pirate station in Northern England before a stint on Kiss FM, London's iconic pirate in the '80s and which through the turn of the century became part of U.K. rhythm-culture's establishment.

Jamie says that the latter took him to the radio station once, "and picked some records he said I could have, definitely not things I liked at the time, but pretty heavy hardcore rave records." Yet at a young age, he says, it wasn't the vinyl itself that attracted him: "It was all about the turntables. I was obsessed with the technology — they seemed so weird compared with everything else that was going on growing up. My uncle gave me his old ones when I was about ten." Two house records and a bedroom tutorial later, the ten year-old was mixing. 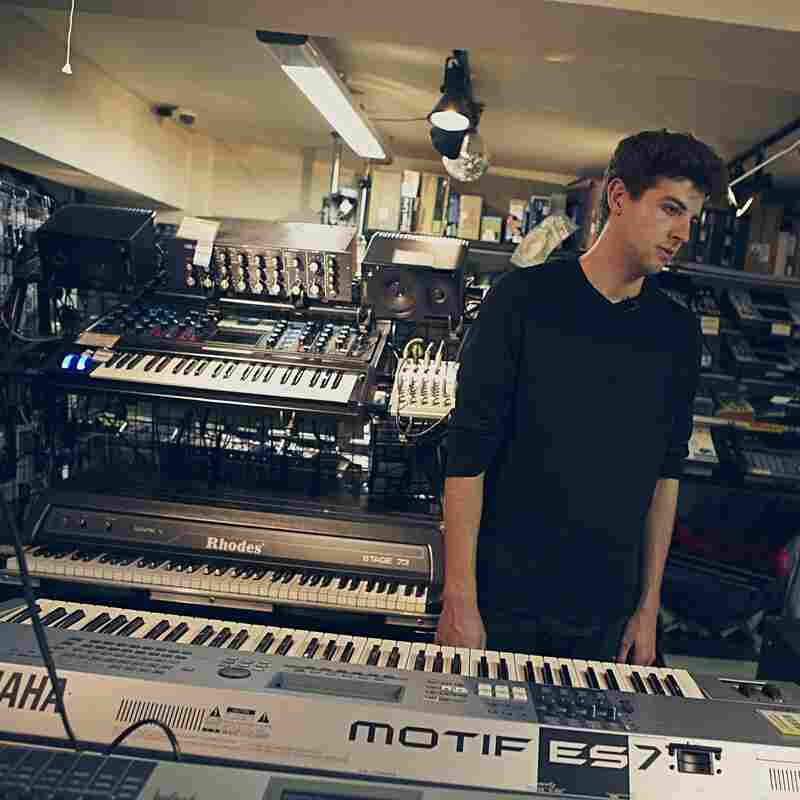 Though he was living through a dance-music renaissance in England, turn-of-the-century Jamie gravitated towards hip-hop and the sampledelic pastiche of artists such as DJ Shadow and RJD2, "finding records by figuring out what samples the producers were using." But it wasn't long before he was following his classmates to the historic early dubstep DMZ parties in Brixton, "obsessed with the loudness and the bass." Squint at In Colour hard enough and you can clearly hear the influence of those two early musical ideals — a love for the crackle in the lost groove and the width of the bottom — filtered through a decade's worth of other information.

Where Jamie kept finding that information speaks not only to the development of his own music, but also to that of his band — and to a comfort with formats and institutions. An affinity for skateboarding he shared with childhood friend and future The xx band-mate Romy Madley-Croft drove them to Notting Hill skate-shops. "A lot of the new electronic music we were discovering was from the credits of skate videos, so I would go to Slam City and then downstairs to Rough Trade [record store] to ask about certain records, like Anti-Pop [Consortium], which Romy and I would buy for each other." Resources multiplied from the local library — "Romy had [Air's] Virgin Suicides on tape that she just constantly borrowed, so I ended up buying it because she didn't have a turntable in her room" — to, this being the mid-aughts, Myspace, and Jamie, Romy and Oliver Sim's shared musical language blossomed. "Now," he says, "everything is just merged."

Jamie's DJ career ran parallel. It began inauspiciously, he says, around the age of 16, in a basement jazz club in Camden, where he "played soul and jazz records between the house band's sets, and I couldn't play anything electronic — actually I could, there was nobody in the bar anyway." It wasn't long before he was playing records to make people dance, joining Mount Kimbie, Joy Orbison and James Blake at another bar in Camden, The Lock Tavern, all of them making music that followed dubstep's explosion, all of them on the cusp of fame. Through The xx's success, he's never stopped being affected by the feeling of playing other people's music.

"I still find it inspiring," he says when I ask how listening to other people's music influences his own. "It's still as exciting to play records I've not heard before, as it was when I was young. There's not much that makes me feel like that, besides making music. And they definitely feed into each other. When I hear something new, mostly in rhythms, I often find it interesting to recreate it in a studio in a completely different way."

But the discovery process, and the consumption it emboldens, comes at a price: "When I buy lots of records, I stop making music — it's detrimental to the creative side. When I'm DJing a lot, it's just basically partying every day." The man who minutes earlier had espoused his love for playing other people's music, was now speaking as someone who had been on the road too long. "I'm looking forward to going back into the studio," he said. "That's usually how it goes — I get to the point where I really need to be doing something else." Not for the first time, his gaze fell away.

Only a couple of nights earlier though, it was easy to get a sense of the fluid and symbiotic relationship between Jamie's music, vinyl records, the art of DJing and the creation of great pop music moments. It took place at the head of his set at New York's Terminal 5, a beyond-sold-out Saturday night-in-August show that marked his biggest solo appearance in New York. In Colour was by that point a few months old, and though the album was partially produced in and inspired by this city, it was his first gig there since its release. So the feeling was one of coronation, a tour-stop important enough that Jamie decided to celebrate the occasion with a little bit of minor, if pointed, theatricality.

Rather than naturally mixing out of a final track played by the opening DJ, Mike Simonetti — as is his norm — the music instead came to a full stop. Simonetti packed up his record bag and walked off-stage. The house went dark and Jamie appeared on stage, backlit by a flood of crisp, natural-white lights, showing only his silhouette and the gear on which he would entertain the sold-out crowd: a pair of turntables, a mixing board, and a pair of CDJs (which also allow the playing of sound files off USB memory sticks, a common tool for digital DJs). The art direction was superb, his motions precisely choreographed. He lifted a vinyl record and put it on the left turntable, picking up the tone arm to carefully place it on the vinyl, and then raised the volume of the appropriate channel on the mixer.

The music that began playing had no backbeat. It was, instead, performed in a cappella: "Good Times," a gospel-soul song released in 1972 by a Brooklyn vocal quintet called The Persuasions. Though the soundsystem was loud, it was a very unclub-like moment in what could be defined as a definitive club-like atmosphere. This being New York, the birthplace of the hip-hop DJ, a few people had an idea of what might have been next. But not everybody — certainly not the twenty-something man next to me, who after a couple of minutes of listening to the gorgeously church-y harmonies wondered what the "expletive" was happening here? But as Jamie moved towards one of the CDJs, and the backlit lights flooded Terminal 5's ballroom in purple, the scene began to explain itself. Jamie raised another channel on the mixer, and a hip-hop beat kicked in over The Persuasions. In a moment, Young Thug's scrawny sing-song rapping pulled the sound out of the '70s and into the "hood time" of one of 2015's biggest anthems, acknowledged by whoops, hollers and the sense that the good times were, indeed, arriving. The silky transition from one to the other was a simple, eloquently expressed maneuver of classic DJing — a blend, using the sample source to set-up the pay-off. And now the room was in hot and heavy sing-along time, and the party had begun.