Accessibility links
A New Apple Patent Could Block Fans From Taping At Shows : The Record The technology giant now has a patent for a system that could prevent you from taking photos or recording videos in specific places, like concert venues or movie theaters.

A New Apple Patent Could Block Fans From Taping At Shows

A New Apple Patent Could Block Fans From Taping At Shows 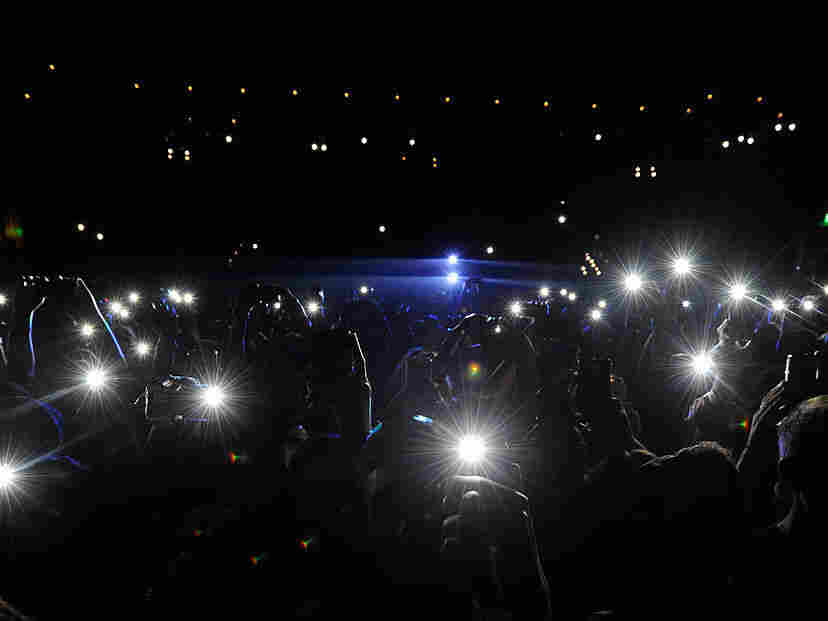 Fans hold up their phones at a Childish Gambino performance in 2014. Ethan Miller/Getty Images hide caption 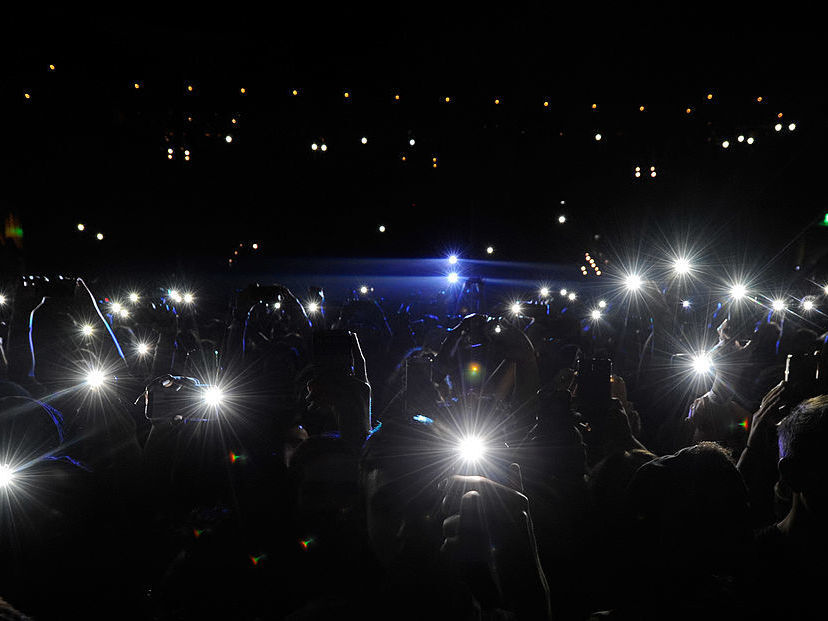 Fans hold up their phones at a Childish Gambino performance in 2014.

Sick of getting your view blocked at live shows by people holding up their phones? Apple was granted a patent yesterday for technology that can disable those cameras — at least in specific places.

The system mapped out in this patent would use infrared emitters to temporarily deactivate the photo and video capabilities on devices like mobile phones, laptops, stand-alone video or still cameras or any other "electronic device with an image sensor." Venues, or those in charge of a given space, could post an infrared emitter to temporarily, and remotely, disable those recording functions on devices within the emission range. 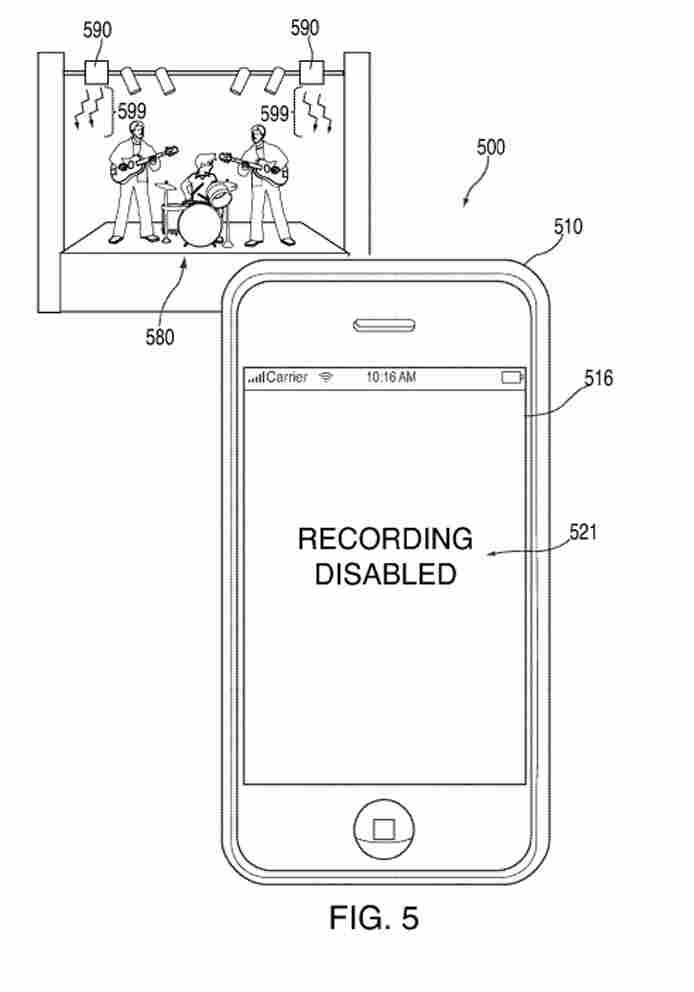 A drawing from the Apple patent specifically shows how the technology could prevent music fans from taping a live show. United States Patent And Trade Office hide caption

Within its patent application, Apple specifically laid out the technology's use in the context of musicians and a live concert venue.

There are many ways in which the raw technology could make its way into the marketplace, but it's easy to imagine how the technology, by itself, could be used to limit free expression. For instance, blockers could be installed in public spaces or in other places where visitors may want to snap a picture or record video. That could give governments, the military or police an easy means to shut down activists. On a less grave note, it could also be a vehicle for certain organizations — museums, for example — to maximize sales of their images, by preventing visitors from simply snapping their own.

It's not all ominous, however. Another potential use detailed in the Apple patent lays out how this technology could provide a multimedia-rich experience to a user, in much the same way that a QR code on a commercial product works: Metadata could deliver detailed descriptions, hyperlinks, video and audio narratives and other materials to the person using the phone. (Unlike artists at a concert or actors on a screen, however, an object like the "Aztec water jug" used as the example in Apple's patent could never claim royalties or other payments.) 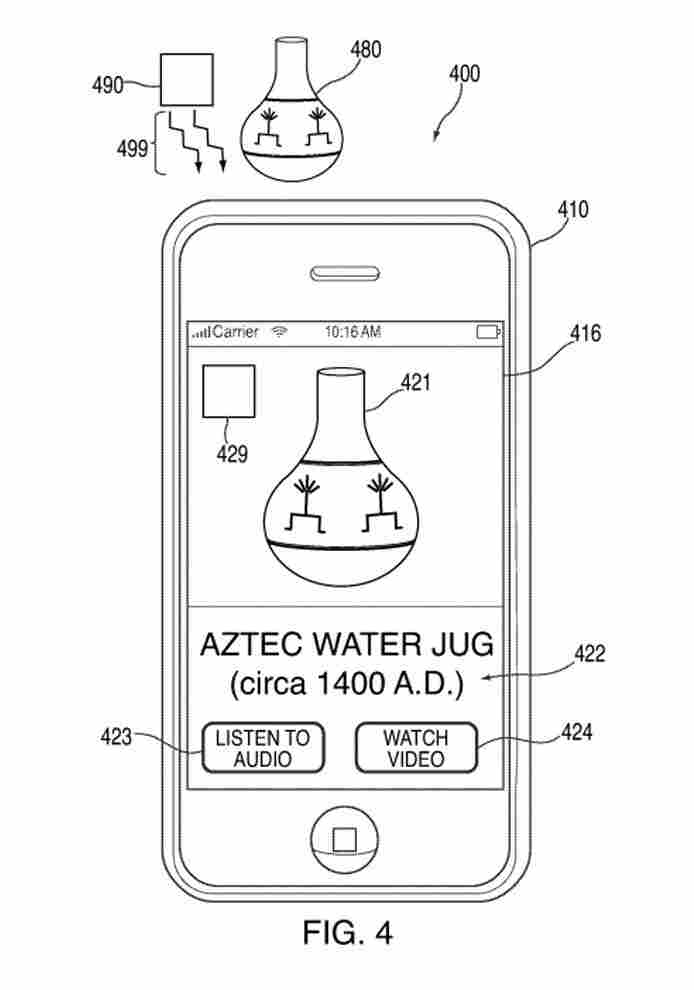 But it's a sign of the times that stakeholders like movie distributors and theaters, concert venues, presenting organizations and record companies, along with musicians, may increasingly look to technology to enact policy, rather than work out the issues by legal or social contracts with the public.

Musicians and promoters have already been responding to fans taking pictures and filming videos at their shows in a variety of ways. Venues often post signs and inform the audience about such prohibitions, but increasingly, performers are taking matters into their own hands. Last month, a clip of Adele went viral in which the superstar English singer stopped mid-show to ask a woman in the audience — very politely — to take down a tripod. "Can you stop filming me with a video camera? Because I'm really here in real life," the superstar English singer requested, adding, "I'd really like you to enjoy my show because there's lots of people outside that couldn't come in."

As it is, certain artists require even media professionals to adhere to very specific and restrictive contracts. Last year, British photojournalist Joel Goodman took Taylor Swift to task over the agreements her management company allegedly required photographers to sign — which included a stipulation that the journalists' equipment, including their cameras, could be destroyed if their conditions were not followed.

Other performers are taking physical measures with their fans, even before anyone whips out a phone. The Lumineers, Dave Chapelle and Alicia Keys are among the artists and entertainers who have begun using neoprene pouches made by a company called Yondr. When a fan walks into a live show venue that is using Yondr, he or she drops his or her phone into a pouch, which then locks up. If the fan needs to use the phone during the show, he or she needs to step outside and ask security to open the pouch with a special device.

It's possible that Apple, which declined to comment for this story, has developed technology that surpasses the specific tools described in this patent application, which appears to have originally been filed in 2009. For example, Apple mobile devices now use iBeacon, which employs a Bluetooth signal as a platform for creating interactive experiences; the patent granted to Apple yesterday specifically references infrared, an older technology.