Accessibility links
I'm Giving You Everything: A Portrait Of The Writer As A Young Spice Girls Fan : The Record On the 20th anniversary of the release of "Wannabe," the single that launched the girl power juggernaut on the world, the writer Laura Snapes recalls her pre-teen obsession with the Spice Girls.

I'm Giving You Everything: A Portrait Of The Writer As A Young Spice Girls Fan

I'm Giving You Everything: A Portrait Of The Writer As A Young Spice Girls Fan 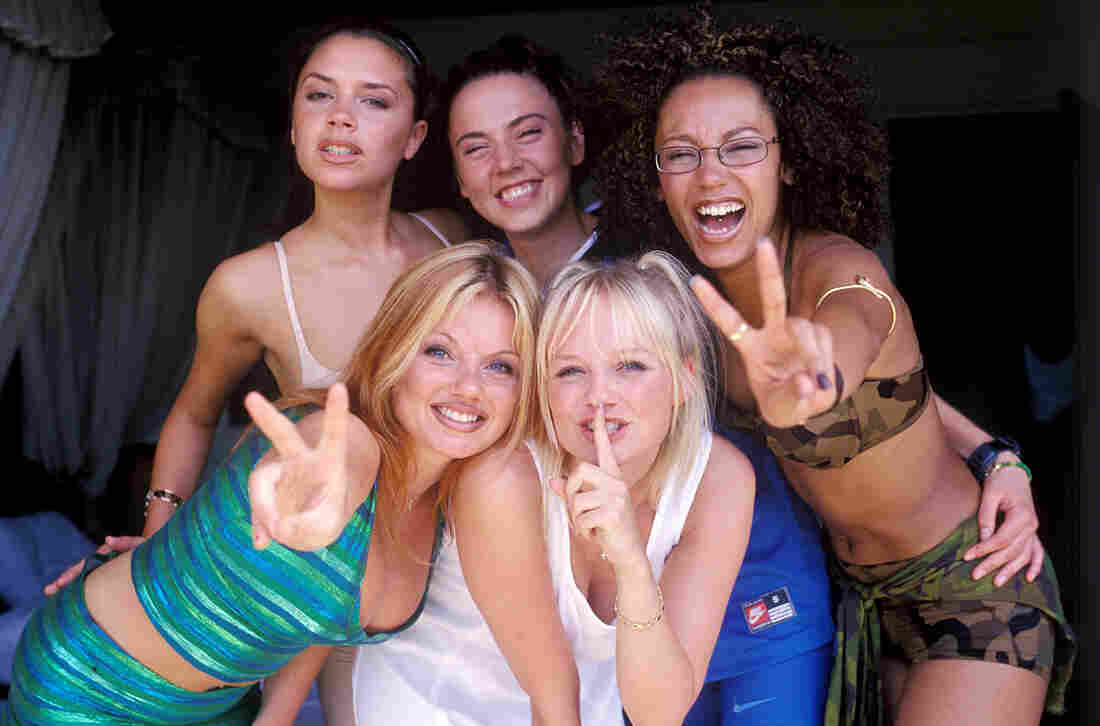 The Spice Girls in 1997, about a year after the release of the group's debut single, which topped the U.K. pop charts for seven weeks. John Stanton/Getty Images hide caption 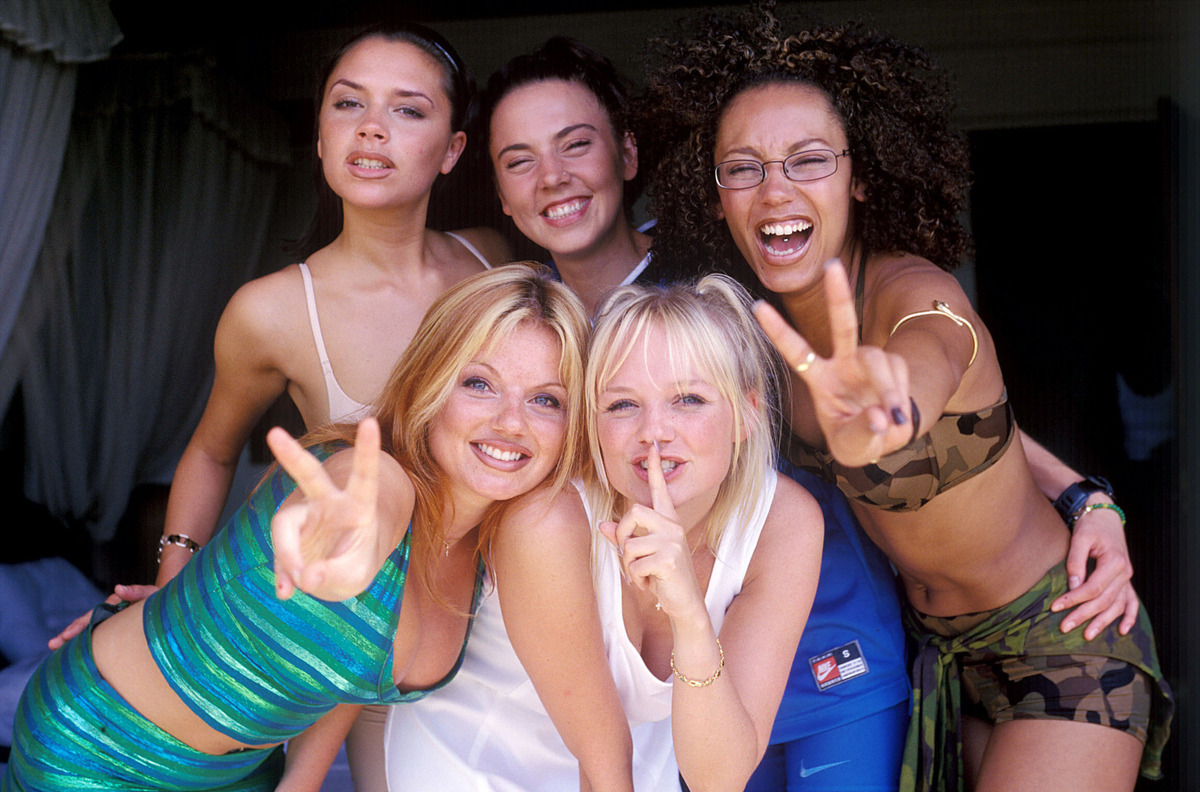 The Spice Girls in 1997, about a year after the release of the group's debut single, which topped the U.K. pop charts for seven weeks.

In 1962, Goonhilly Earth Station's biggest satellite dish, Arthur, received the first live trans-Atlantic television broadcast from America. Over the coming decades, it would bring Muhammad Ali's fights, the Apollo 11 moon landing and the U.S. leg of Live Aid to British TV screens. In the year 2000, as an 11-year-old on a school trip, I approached this monument to telecommunication in a state of anxious anticipation over less momentous news. We had just gotten dial-up Internet at home, but I was only allowed on it once a week. I had to take my chances to get online when I could. On the massive computers promoting the glorious World Wide Web, I punched in spicegirls.co.uk and lost the rest of our tour group as I waited for the site to load. I needed to know: Had they announced their split yet?

Paranoia over the inevitable ruled my final pre-teen years. I was the one who hung on too long, insisting that the Spice Girls were still viable when everyone knew the game was up. Their debut single, "Wannabe," was originally released in Europe 20 years ago yesterday, on July 8, 1996. A few months later, I started at a new school, where my new best friend Holly introduced me to this five-headed pop hydra. We were soon writing letters to the band, and once enclosed my favorite necklace, which we insisted they share. (How they could possibly resist fighting over this piece of chewed black cord threaded with wooden beads was unclear.) We had a mild disagreement when I wrote our home phone numbers and took great pains to explain that we were both unlisted. I'm not sure what I thought they were going to do with them — read them to the nation on Live & Kicking? — as she wisely pointed out. 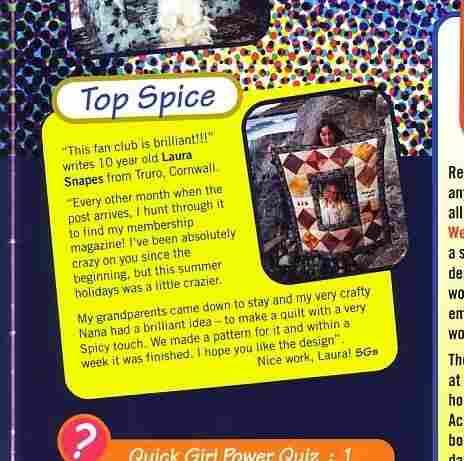 A clipping from a Spice Girls fanclub magazine showing the author, at age 10, holding a "Baby Spice" quilt she made with her grandmother. Courtesy of Laura Snapes hide caption

My Spice Girls fandom wasn't the cute kind of fervor (as seen in photos from another school trip, filled with toothy girls in floral leggings flashing the Girl Power sign) but all-consuming desperation. I would set aside Sunday afternoons to glue magazine cuttings onto both sides of a sheet of A4, slide it into a plastic wallet and thread the new page into my bulging lever-arch archive. (I once left a pile of unarchived clippings at a frenemy's sleepover, and she claimed to have burned them.) My parents wouldn't let me get Spice Girls wallpaper because "I'd grow out of it," which seemed inconceivable. In August 1998, when my baby brother was being born, my other brother and I were sent to my grandparents' house and given projects to keep us busy. My nana helped me make a Baby Spice quilt, which got me into their fanclub magazine. When Victoria and David Beckham had their first son in March 1999, I sent a pair of discounted blue Mothercare socks to one of Britain's richest couples. ("Beckingham Palace" was all you needed to write on the envelope; I received signed photos back.) Once we got cable, I would scour the TV listings for any Spice Girls-related shows. I vainly begged my mum to set the VCR for a mysterious network called Spice that only came on air at 10:00 p.m. and showed the same program until it powered down at dawn. (It was, of course, a porn channel.)

I don't remember the first time I heard the Spice Girls' music — probably sitting on the cabin bed in Holly's tiny lilac bedroom, on the CD changer with Suggs' "Cecilia." Listening to those songs now, I don't really hear what they actually sound like, the instrumentation; they're photographs of primary color emotions that then seemed incredibly sophisticated. I didn't have many friends before going to my new school, but now pro-friendship riot "Wannabe" was my reality and anthem. Age seven, Holly and I embarked on a mission to learn as much about "doing it" as possible, just as safe-sex anthem "2 Become 1" became the band's first Christmas No. 1. Come 1997, the playground was awash with rival groups performing variations on the Motown wiggle to "Stop."

What I do remember specifically is the first time I read about them in a magazine. Geri explained that until now, she'd always assumed that pop stars were kept in some sort of box, and only let out for TV appearances. This was sharp knowledge to acquire as a seven-year-old: not for me infantile 2-D conceptions of the pop machine, but an adult understanding that these women had rich internal lives. This roughly amounted to knowing who their boyfriends were (and adopting them as my de facto crushes) and any other tidbits that trickled out via Smash Hits. Age 10, I started getting my dad's newspaper from the village post office, and would buy any tabloid that contained even an inch-high story about them. My concept of them as pro-girl pop cheerleaders soon expanded. After Mel B's husband sold a story about them having sex "solidly for two weeks up to three or four times a day," she explained that her mum consoled her by saying that nobody would believe it as it was physically impossible to do it all night long. I logged this important fact, along with speculation over Mel C's sexuality and Geri's visible eating disorder. This, it turned out, was the complex richness of their — women's — lives.

It wasn't until much later that I looked up proper journalism from the Spice Girls' imperial period and realize how much the reality jarred with what I had been sold. Kathy Acker's Vogue profile of the band looped around Tumblr, criticizing their ruthless individualism, but praising their energetic, populist feminism. I read the mocking Spectator interview where they — or Geri and Victoria, at least — emerged as pro-Thatcher, pro-monarchy and anti-Europe (positions I'm glad I didn't know age seven otherwise I would no doubt have parroted them as my own). David Sinclair's comprehensive biography, Wannabe: How the Spice Girls Reinvented Pop Fame, revealed them to be even more venal and conniving than the mounds of branded plastic that I craved made clear.

It was a strange reckoning, discovering that the pop culture that formed you had some rot at its core. I'm no fan of much of what they set in motion: celebrity culture, kids' pop that didn't even bother to coat its commercial intent with anything resembling personality, so-called "choice feminism" rooted in labels rather than liberation. But dismissing their power on ideological grounds doesn't feel right. They were feminist ambassadors who believed that a tyrannical female prime minister was an automatic feminist win. Sex-positive family entertainment. Neo-liberalist firestarters. Bawdy working class girls who broke free of the pop manufacturing machine to create an even bigger one. Cheeky patriots who made pop into a leading British industry and maintained a strong disregard for the country's rock establishment. The Spice Girls were all of these things.

They never formally announced their split — or if they did, I had moved on. At age seven, the Spice Girls formed my entire idea of what was cool and worldly, but as more codified teenage notions set in, I realized they no longer fit. Holly and I disproved their maxim that "friendship never ends" when she decided that S Club 7 was the superior band, a dagger through my tiny heart. A year later, I followed suit, replacing their posters with images of Avril Lavigne and tAtU. I accepted that Geri's second solo effort, Scream If You Wanna Go Faster, wasn't the greatest record of all time. Attempted to eBay my signed photos of the Beckhams. Dumped the contents of my meticulously compiled Spice Girls folders into the recycling bin without a second thought. Reading their original press coverage these past few months has been a kick, but what I wouldn't give to have those folders back.