Accessibility links
Social Fabric: Will The Closing Of London's Great Nightclub Unravel A Scene? : The Record One of London's most renowned clubs, fabric, is shutting down and the global dance music community is mourning. The decision will likely have broader effects than the shuttering of a single space.

Social Fabric: Will The Closing Of London's Great Nightclub Unravel A Scene?

Social Fabric: Will The Closing Of London's Great Nightclub Unravel A Scene? 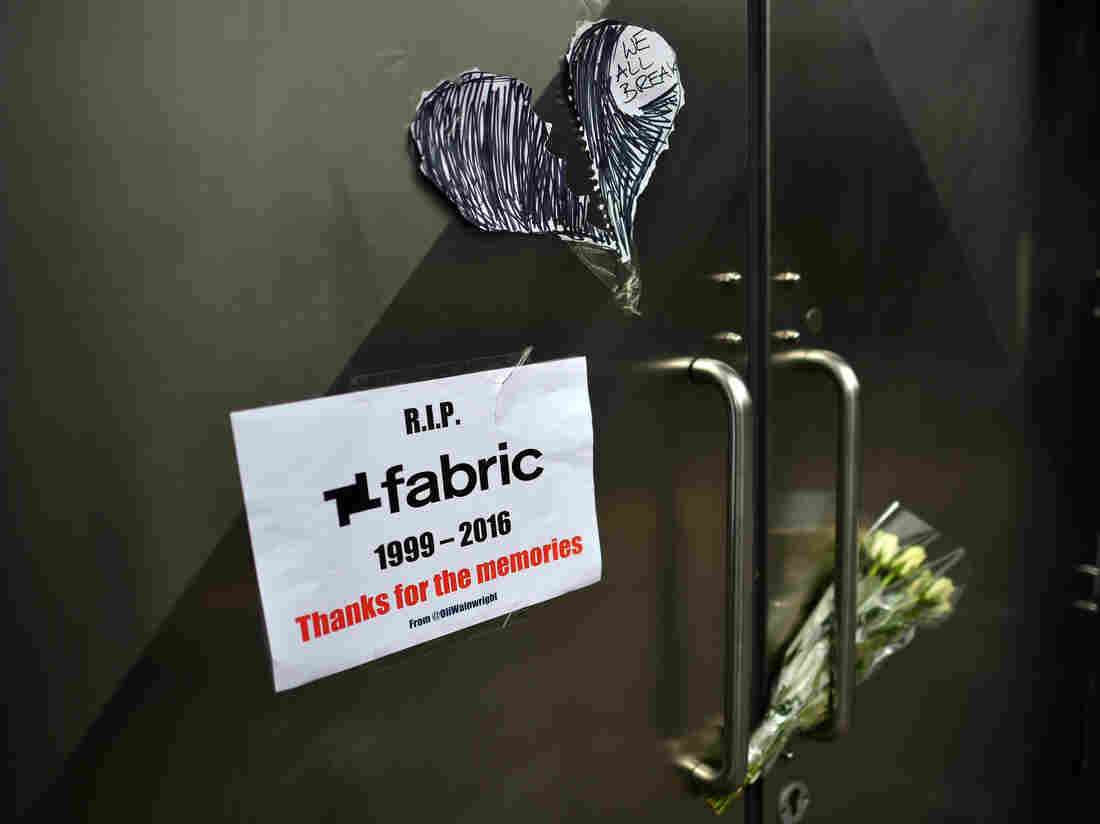 Flowers outside the nightclub fabric in London, after it was closed on Sept. 7. Carl Court/Getty Images hide caption 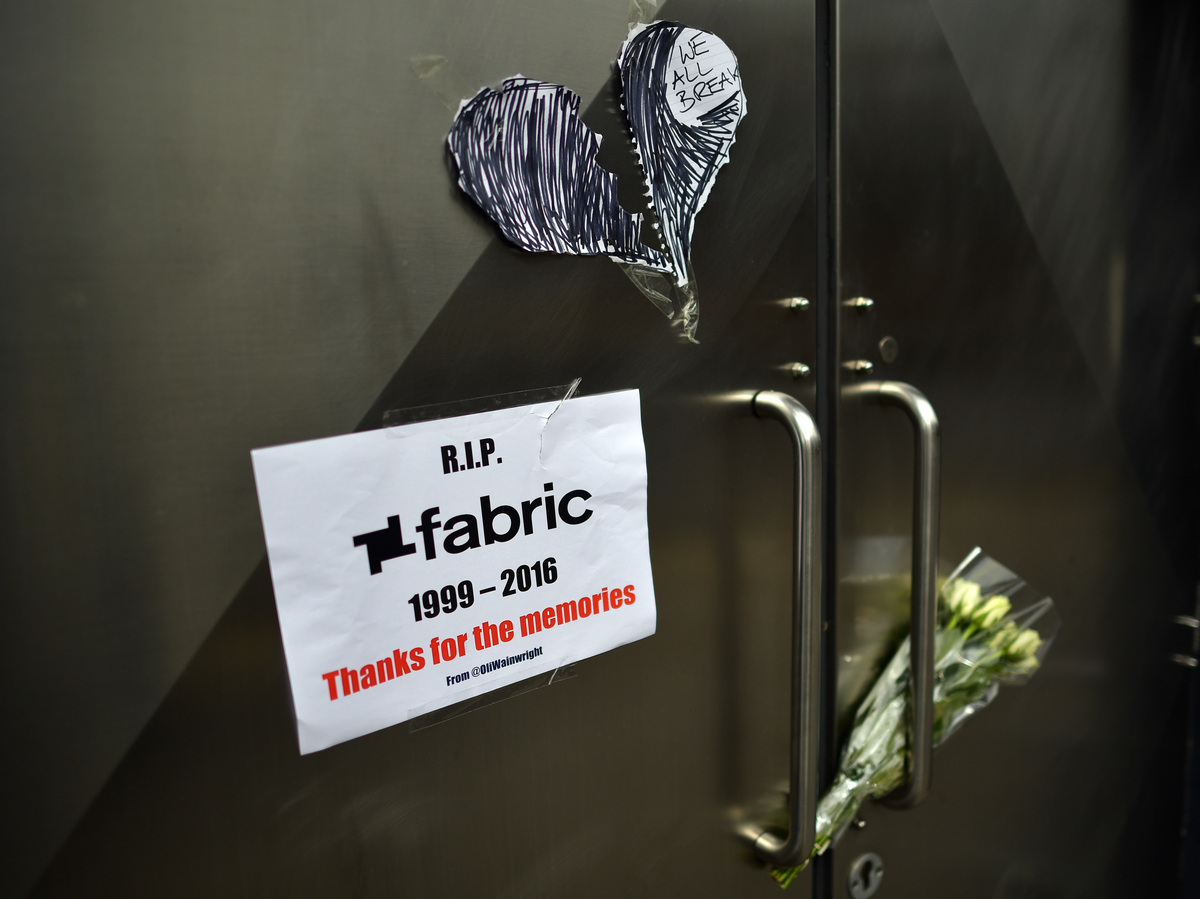 Flowers outside the nightclub fabric in London, after it was closed on Sept. 7.

And so, it ended with, very appropriately, a deathly quiet. "Fabric is closed. That's it. Heartwrenching silence around the room." So read a Tweet by Jeremy Abbott, the digital editor of Mixmag, who was in the room on Tuesday night when the Islington council licensing committee's met to determine whether the London neighborhood would permanently revoke the operating license of fabric, one of the city's longest-running and most iconic clubs. The issue had come about because of two drug-related deaths around club this summer. But for many in the London nightlife community, and for a world of dance-music fans praying, wishing, hoping — over 150,000 signatures were collected on a Change.org petition to "Stop the closure of fabric" — it seemed an all-too familiar episode of a war on clubs, where battle lines formed around public health and criminal activity, but almost inevitably boil-down to urban redevelopment issues.

Most observers hoped that it would be different with fabric, which had received letters of support not only from the local Member of Parliament but also from the newly elected Mayor of London. The reason for the outpouring was easy to understand: Not only was the 2500-person capacity club a major hub of London's musical culture, it had become a global destination and a pivotal totem of the city's economy as well. Now, quite possibly, it is a victim of that economy's natural evolution.

fabric evolved into a prized city institution not long after its opening across from the Smithfield Market in a then-mostly rundown section of Clerkenwell in 1999. With three separately booked rooms and a qualitative, unbiased music policy, the club instantly established a reputation for supporting London-grown artists styles, such as U.K. garage, jungle/drum 'n' bass and dubstep; while its excellent one-of-a-kind soundsystem (which included sub-bass speakers installed under Room One's wooden dance-floor for extra-sensory experience) attracted some of the world's finest and most experimental house and techno DJs and electronic music performers. The calendar featured a smart layering of talent — resident DJs who would become global stars; well-curated, thematic and over-packed bills; occasional residencies by master craftsmen and women — with no quarters paid to any of the festival-main-stage EDM bros. As a venue of non-mainstream dance-music, its only year-round global competition lay at Berghain in Berlin (incidentally, the only major Western cultural capital trying to incorporate nightlife into its urban development plan).

The club also understood the value of its brand to those who knew what it stood for. In 2001, it launched the Fabric and FabricLive series of mix-CDs, which soon became regarded as career achievements, popular guides to dance-music's ever-changing styles of the day, and in many cases — BBC stalwart John Peel, the pre-fame Diplo, arch techno experimentalist Ricardo Villalobos, Detroit house's bad boy Omar-S, U.K. house supremo Maya Jane Coles and this July's mix by London's Garage/Grime queen Flava D, among others — exceptional creative documents. In 2013, fabric doubled down on its ability to develop U.K. artists by starting Houndstooth Records. (Some reports cite that fabric's closure may affect as many as 250 full-time jobs.)

The club and company's market ambition and creative largess made them a cornerstone of a particularly fertile period for London music. And rather than compete with the influential musical entities that were popping up all over the city's landscape — whether Erol Alkan's Trash night of electro-garage-clash-house mash-ups, the ground-breaking dubstep party FWD>>, the DJing evolutions emanating from club Plastic People or the variety of black British styles championed by the ex-pirate radio station Rinse.FM — fabric engaged these leading lights on their own terms and presented them to its own (bigger) audience. This is the role that great big clubs were meant to play in healthy local nightlife scenes — helping to expand the community beyond the insiders by helping the uninitiated to explore novelty in a neutral space, creating a strength-in-numbers atmosphere — and one that smaller establishments aren't equipped to enact.

Yet even as fabric continued to be a beacon on London's nightlife map, the city all around it had been changing. The non-stop development and gentrification of formerly impoverished neighborhoods, fed by the city's insatiable real estate boom, has, according to Mayor Sadiq Khan, resulted in the closure of half of London's clubs and 40% of its live music venues. Having economically stimulated parts of town that big money developers formerly ignored, the nightclubs and flourishing cultural establishments are now being driven out, as new high-rise housing or boutique hotels (with their own restrictive and private forms of nightlife entertainment) slide on in.

If this all sounds the least bit familiar to club historians, or veteran New York City dancers, it should. Everything from the anti-drug and public safety campaigns cited by the authorities to the withholding of public gathering and liquor permits by city governments were also tactics utilized by Rudolph Giuliani to systematically destroy that city's nightlife in the 1990s under the auspices of the "quality of life" campaign under which "America's mayor" "cleaned-up" the Big Apple. (That strategic initiative featured one never-to-be-forgotten quote from Giuliani's Deputy Mayor Rudy Washington, when he called the city's clubs "little buckets of blood" and bragging about "paralyzing them.")

Though real-estate redevelopment was rarely cited at the time, one needed only to see what Manhattan was then becoming (a culturally sterilized playground for professionals) and what the major establishments that Giuliani shuttered have become: Twilo (also the site of the legendary Sound Factory) is now The McKittrick Hotel, the venue for Sleep No More, an interactive performance piece popular with the edgy suburban set; The Tunnel is a corporate events hall that hosts, among others, Spotify's Christmas party; and the gothic church that once housed the Limelight is now a mall. (England's own historians noting what happens to classic U.K. clubs once they've been run of town, would do well by checking out what The Hacienda, the '80s venue run by New Order and Factory Records and a cornerstone in the "Madchester" acid house scene, looks like now.)

Yet the historical ironies uniting the two cities run even deeper than that, and insights into them are the lifeblood of London-born professor Tim Lawrence's great new book, Life and Death on a New York Dance Floor, 1980-1983. Though ostensibly a celebration of the American city's renaissance period (a streak not unlike that of fabric-era London), the tome also sneaks a peak beneath the social hood, and the analogous circumstances — the combination of reductions in government spending, tax breaks to stimulate corporate investment and skyrocketing real estate, that transform the city into a "less democratic space" — are striking. Party culture, argues Lawrence, "revealed its social, cultural and even economic potential during the period"; whereas "the renaissance ... began to unravel when New York assumed the character of a neoliberal city, organized around finance capital, gentrification, real estate inflation and social regulation."

The silence in New York following this dismantling (it's making a slightly wheezy come back the past few years) and London now is deafening. fabric's owners and supporters have vowed to fight, and based on documents being released about the investigation of fabric's compliance to anti-drug safety regulations, the story seems far from over. But regardless of the outcome, it is time to admit that what's at stake is more than just the fate of one club.