Accessibility links
Isaiah Rashad Dusts Himself Off And Tries Again : The Record Depression and addiction stymied the rapper after a promising debut on the same label that launched Kendrick Lamar. On The Sun's Tirade, he sounds like a new man, refreshed and self-aware.

Isaiah Rashad Dusts Himself Off And Tries Again

Isaiah Rashad Dusts Himself Off And Tries Again 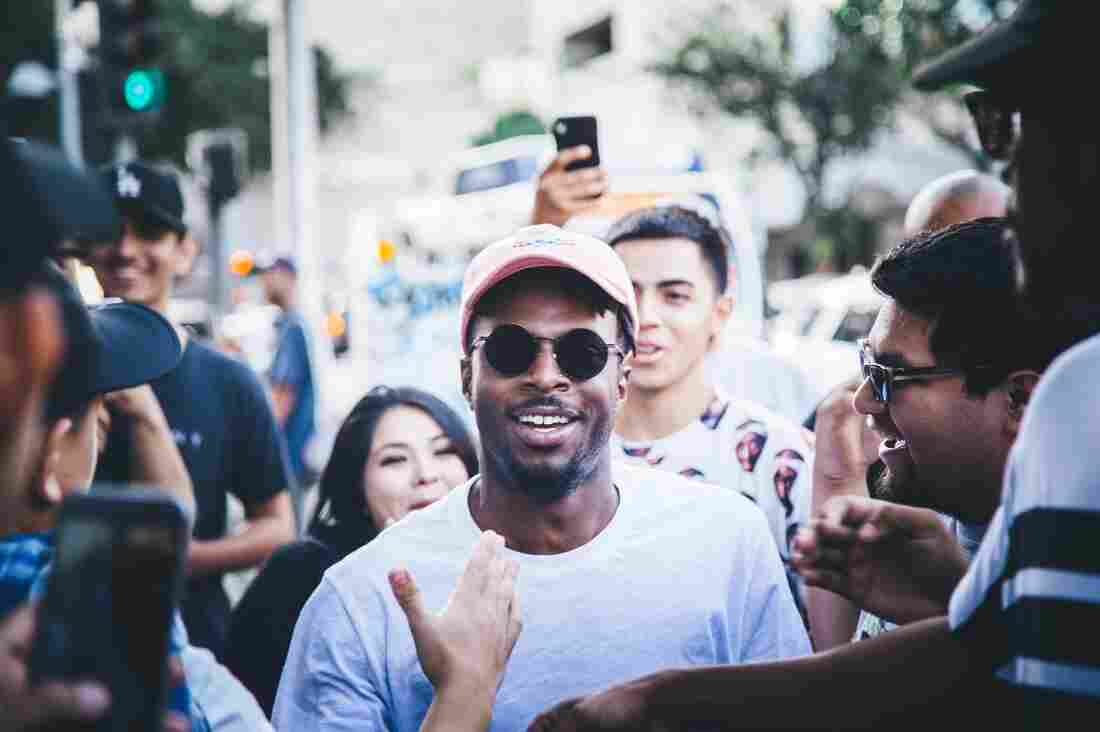 Isaiah Rashad greets fans outside a signing in downtown Los Angeles this fall. His new album, The Sun's Tirade, is out now. Jorge Cano/Courtesy of the artist hide caption 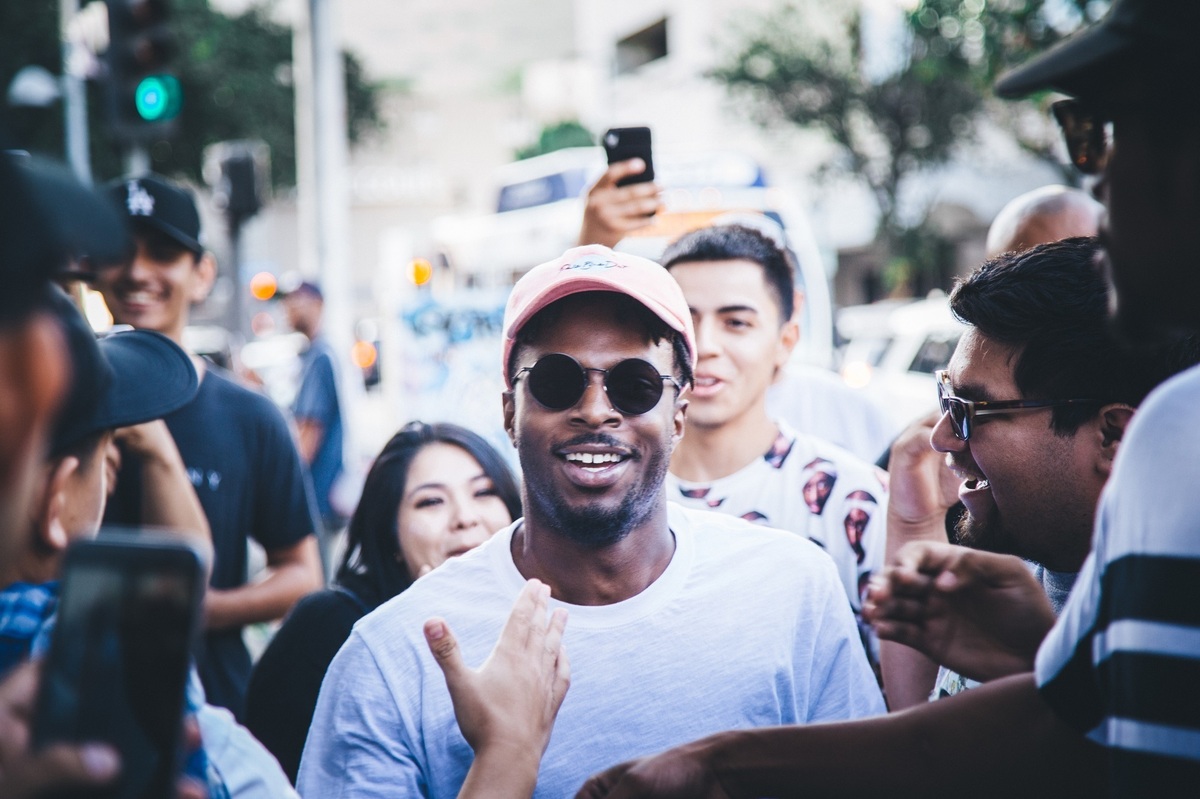 Isaiah Rashad greets fans outside a signing in downtown Los Angeles this fall. His new album, The Sun's Tirade, is out now.

Jorge Cano/Courtesy of the artist

I met Isaiah Rashad late this summer, during a stop on the manic press run that comes with the release of a new album. Like most of his fans, I wanted to know where he had been and what to expect from his latest work, The Sun's Tirade. His debut album, Cilvia Demo, dropped in January 2014, and back then I heard an urgent young man from Chattanooga, Tenn., on the hunt for validation through his art. I also heard rare, acidic levels of honesty pouring from tracks like "Banana," a measured, tense journey through a past of childhood disappointment and a present of self-destruction and debauchery. His delivery there, and throughout Cilvia Demo, was impassioned and sharp, almost frantic at times. He was beyond eager to talk to the world.

We're more than two years removed from that version of Rashad, the very new father who — despite having moved to Los Angeles to join forces with one of hip-hop's most powerful and visible labels, Top Dawg Entertainment — was still processing the life he had led as a mischievous kid in the South: late-night escapades with the homies, coping with a broken home, chasing girls, chasing highs. On The Sun's Tirade, released earlier this month, Rashad is addressing grown-man issues: a second child, flat-out addiction, isolation, stagnancy and reckless irresponsibility in the face of already-compounded responsibilities.

A Rational Conversation: The Sound Of TDE's Success

Black Hippy: A New Hip-Hop Recipe With A Familiar Sound

In the lead-up to the album, Rashad revealed he had become addicted to alcohol and Xanax pills while on tour with labelmate ScHoolboy Q in 2014. (In addition to Rashad and Q, TDE also houses the biggest and baddest rapper on the planet, Kendrick Lamar, and the rest of the unofficial "Black Hippy" crew, Jay Rock and Ab-Soul. SZA and Lance Skiiiwalker, both vocalists, round out the roster.) Addiction brought consequences: Rashad was almost dropped from TDE three times, and wound up in the hospital for damage to his stomach lining. During our conversation, he explained his choice to weather that struggle in silence, rather than put his pain on wax.

"Like, I couldn't really make an outright negative, celebrating-negativity song," Rashad said. "I can't talk about it without sounding like I f*** with it. And I couldn't figure out a way to talk about it until after I pushed a lot of that s*** behind me."

Now, Rashad is finally laying it out for the world to see — the very same world he wanted so desperately to connect with two years ago. The first track of The Sun's Tirade, "where u at?", is a recording of TDE co-president Dave Free questioning him about his whereabouts since the first album. From there, Rashad eases his way back into the depths of the South, where trunk-rattling bass and exaggerated drawls roam free. He nimbly weaves his way through the lead single, "Free Lunch," taking care to remind us that he knows where he came from: The refrain "In my hood we call it buck" is a shout-out to the late Pimp C of trailblazing Texas duo UGK.

Most of the songs function as piecemeal explanations for his absence — a revelation about a new daughter here, a confession about depression there. "Stuck in the Mud" is a seven-minute aerial view of his desires and fears, all swarming together: "H**s, dreamers — stuck in the mud / Look at what the reaper got — stuck in the mud / Range, Bimmers — stuck in the mud." The track pauses for a few seconds midway, then the beat switches, featured artist SZA disappears and Rashad uses the last half of the song to point to where his old balancing act — "Pop a Xanny, make your problems go away" — failed. In the final verse, he poses a question he probably should have asked years ago: "Can I work on myself?"

Even though Rashad is playing catch-up, in the industry and in his own collective, it's clear that the eagerness from Cilvia Demo has been quelled on The Sun's Tirade. He sounds more patient, more at ease relaying his messages of near self-defeat. When I mentioned the difference between his delivery then and now, he smiled a smile of success. "That's like control and effect right there," he said. "I needed to be heard, but I needed to actually say it how I wanted to say it."

The "how" is, in part, a shift in format: away from one-verse songs that sound like he's expending the last of his energy — e.g., Cilvia Demo's punched-up, braggadocious outro, "Shot You Down," where Rashad spits competitively alongside Jay Rock and ScHoolboy Q — and toward the more nuanced and developed approach of that album's "Menthol," a relaxed tale of solace-seeking featuring Chicago singer-songwriter Jean Deaux. "The difference is I had to pace myself because I pulled off doing real two-verse songs," he explained. "It was like, 'Damn, it's really cool that I got through 'Menthol' — why can't I do that again? All right, I should learn how to make those songs.'"

Rashad takes that objective and runs with it across the new album; the overall theme is sprawling, understated storytelling, and it works well for the complex subjects he has to broach. But there's also an adventurous departure, "Don't Matter," which features a frenetic vibe in the vein of the DMV's animated GoldLink. The production, courtesy of TDE affiliate The Antydote and Carter Lang, settles decidedly above the rest of the songs, excitable and propulsive as opposed to laid back and molasses slow. It's a welcome detour that further demonstrates Rashad's yearning for growth.

The Sun's Tirade is Isaiah Rashad's chance to admit he almost got lost in the sauce these past few years, almost tripped unnecessarily over his own problems. Listening now, it sounds like he's not just ready to move past them: He's ready to challenge himself, and the people who have been waiting for him.