Accessibility links
Join The Black Parade: My Chemical Romance And The Politics Of Taste : The Record To toast an iconic album's 10th birthday, a conversation about listening while black — featuring Another Round host Tracy Clayton and writer/poet Hanif Willis-Abdurraqib. 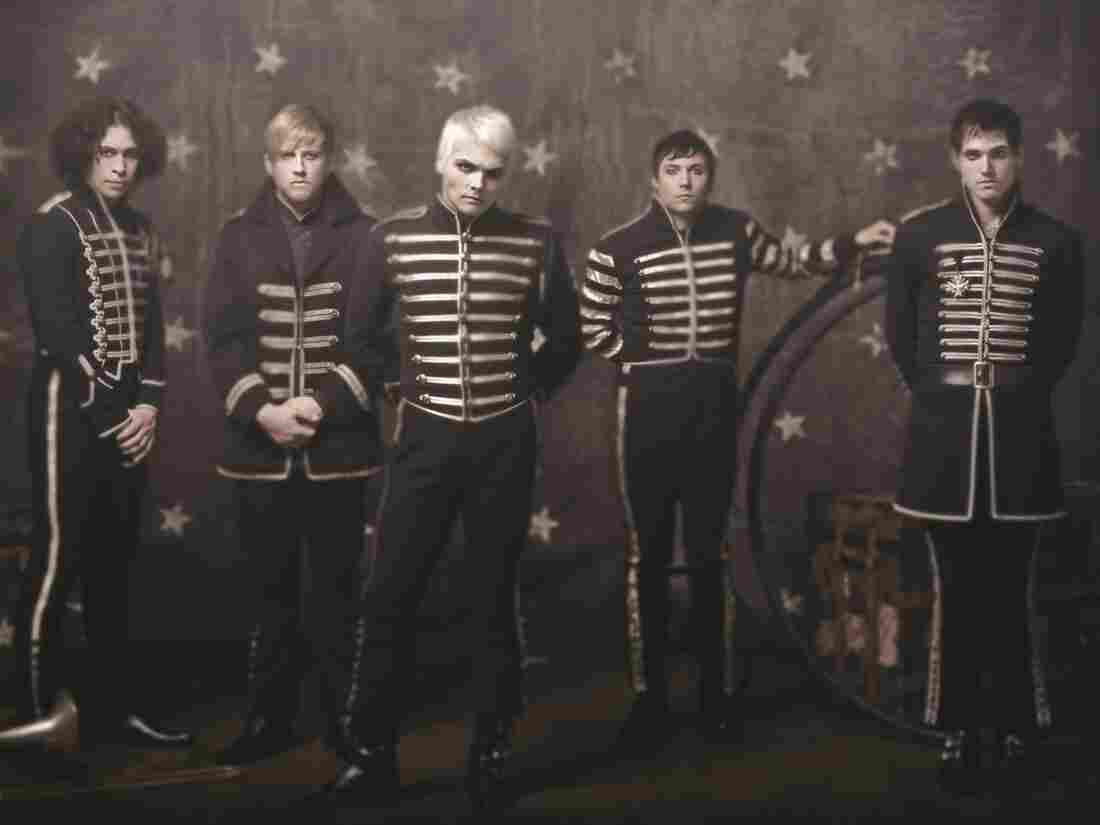 My Chemical Romance released its defining album, The Black Parade, on Oct. 23, 2006. Courtesy of the artist hide caption 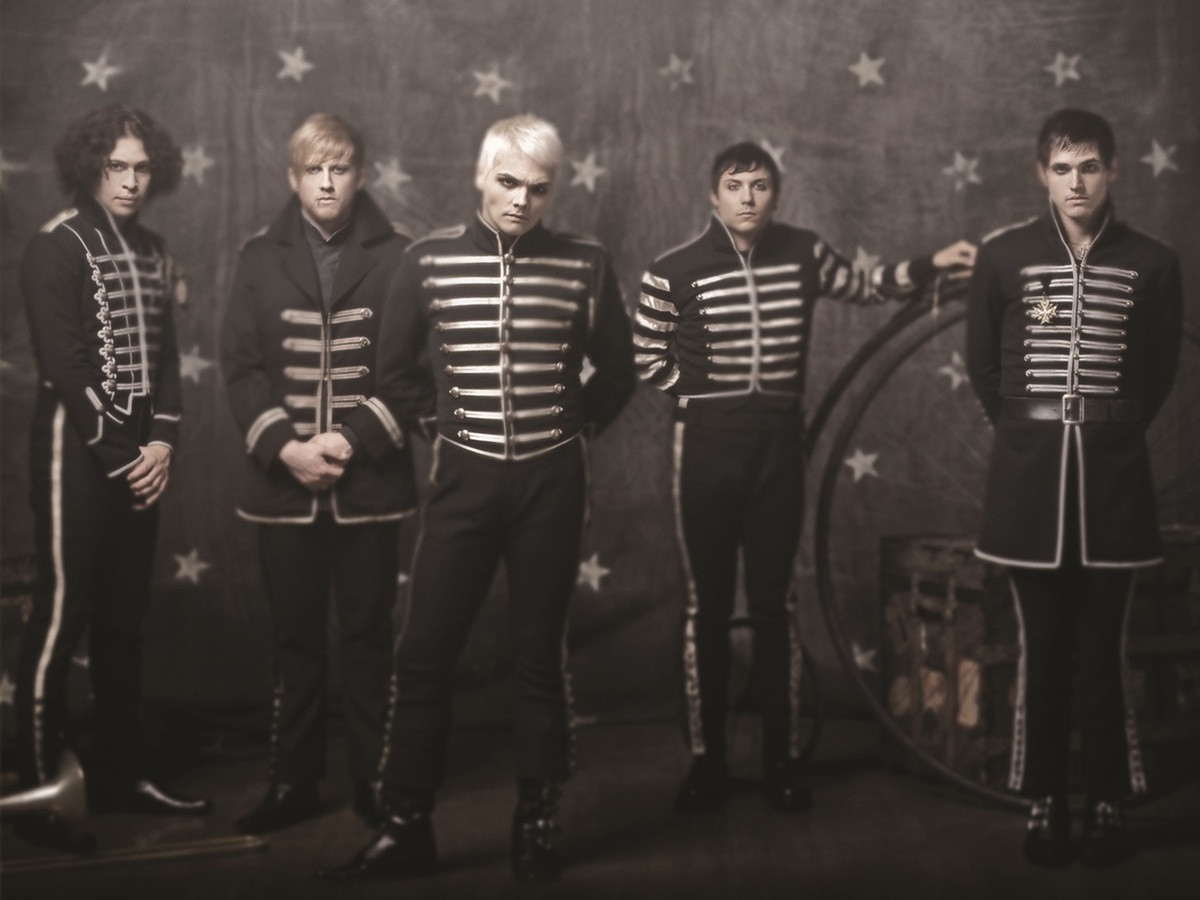 My Chemical Romance released its defining album, The Black Parade, on Oct. 23, 2006.

Sunday is the 10th anniversary of My Chemical Romance's The Black Parade, a defining album for both the band and a generation of pop-punk fans. A decade later, NPR's Daoud Tyler-Ameen is still processing what it means to love this record, and what its impact says about the culture around it.

Click the audio link for his roundtable discussion with Tracy Clayton, host of the Buzzfeed podcast Another Round, and Hanif Willis-Abdurraqib, poet and MTV News columnist — or find it in the All Songs Considered podcast feed. For more on how their conversation came to be, read on.

Common wisdom suggests that the culture you're exposed to in your teens and early 20s ends up informing your taste for the rest of your life. For most people, those years are where the very notion of taste begins. Books, movies, music, fashion, friends: You realize you have options, and you reject the ones that don't match your idea of who you are. The stuff that does stick — be it posters on a wall, patches on a jacket, a dog-eared paperback stuffed in a back pocket — you add to your coat of arms, self-definition by way of curation. What you like informs your understanding of what you are like, and vice-versa.

But every so often, taste leads you somewhere complicated. Sometimes you love a piece of art, but not what that love says about you — and the self-portrait you've so rigorously composed threatens to flake away. This is where I was 10 years ago, when My Chemical Romance released its third album and crowning achievement, The Black Parade.

In 2006, amid the rising tide buoying the fates of Fall Out Boy, Paramore and Panic! At The Disco, My Chemical Romance was as just about as big as it got. This was a boom era for the kind of band whose LPs are stocked at Hot Topic, but the Jersey quintet had always seemed to aim beyond its base. MCR had come out of nowhere with 2004's Three Cheers for Sweet Revenge, an album born of hardcore but ringed with enough melody and melancholy that all stripes of emo and pop-punk buffs could find themselves in it, too, resulting in sales that zoomed past Warner Music's 300,000-unit target on the road to platinum status. The record had hits, it had hooks, and it had reach, especially once the cinematic visuals for "Helena" and "The Ghost of You" found their way to MTV. Crucially, it also had a sense of humor — see the video for "I'm Not Okay (I Promise)," in which freaks-versus-jocks teen comedies are skewered with note-perfect precision — which meant I couldn't dismiss the band as some self-serious Marilyn Manson hangover, even if singer Gerard Way did favor eyeshadow and funeral garb. Three Cheers was really, really good, and that was a problem for me.

Emo had found me in 10th grade, when a two-month relationship left me with a bruised heart and a taped copy of The Get Up Kids' Red Letter Day EP, and had followed me to Yale, where I hipped my freshman roommate to Dashboard Confessional. My Chemical Romance's music was not itself the issue — rather, it was the scale of the thing. This band was so popular, so grandiose — and thus, it was also a punching bag, derided as "mall punk" by the same people who had a few years earlier indicted Britney and *NSYNC as signs of the apocalypse. At a moment when mannered indie-pop and roughshod garage-rock were infiltrating the mainstream, MCR was earnest, dramatic and unapologetically massive, in a way that made it conspicuously uncool. And for me — a gawky black kid at a fancy white university, feeling very much stuck between identities — uncool seemed like the worst possible thing to be.

Writer Carvell Wallace has described the struggle this way: "Having black skin but liking white things is a little like walking on a tightrope ... You have white friends with whom you can never talk about race but you avoid groups of black people because you fear they will hear what's in your headphones and call you out as a traitor." Those words come from a Pitchfork Review profile of TV on the Radio frontman Tunde Adebimpe, with whom Wallace had overlapped years before as an NYU undergrad, and identified as a kindred square peg — the kind of black kid who might not take great care of his sneakers but would agonize over which ratty band T-shirt to wear to a party. That's the needle I was threading when MCR arrived in my life: wrapping myself in thrift-store accessories, loudly claiming bands like TV on the Radio as my heroes, positioning myself as the kind of black bohemian (Pharrell and Basquiat come to mind) who can move between cultural groups by dint of the fascination he inspires.

This version of me wasn't a lie, just a selective presentation of the truth. But committing to My Chemical Romance, which in spite of its success was scorned far and wide as mass-market histrionics for sad teens, threatened to shake the myth apart. So I kept my love of Three Cheers to myself. And when The Black Parade arrived, heralded by an orchestral lead single whose video employed period costume, gothic sets and scores of extras, I was mortified — and pushed the band out of my life altogether. I was out of school by then, playing in bands of my own, working office jobs and learning to carry myself as an adult. Even closeted fandom seemed like a bad habit in need of shedding. The inner emo kid, I thought, had to go.

This summer, a cryptic teaser posted to My Chemical Romance's YouTube channel briefly lit up the social web, stoking fevered rumors among those who'd been missing the group since it disbanded in 2013. A day later came the letdown: There was no new album, no reunion tour — just a 10th-anniversary reissue of the record that had come to define the band's career.

Fans took to Twitter to voice their disappointment. Two voices in particular jumped out at me: Tracy Clayton, co-host of the Buzzfeed podcast Another Round with Heben and Tracy, and Hanif Willis-Abdurraqib, a music writer and the author of a remarkable book of poetry called The Crown Ain't Worth Much. Both of them are friends of friends, part of an extended media family that platforms like Twitter have helped to illuminate. Both of them create work rooted in blackness, Tracy in searching interviews that sound unlike any in her field, Hanif in poems that read more like cultural essays, refracting issues like gentrification and police violence through the grammar of hip-hop and pop culture at large. Both of them were legitimately upset that My Chemical Romance was not getting back together. I knew I had to talk to them.

It isn't just that I've come around to The Black Parade in the past year, though that helps: When I finally allowed myself to listen to it all the way through, when I researched its underlying narrative about a cancer patient's journey to the beyond, when I stumbled on live videos of the band dressed in marching gear and corpse paint, the weight of it all hit me over and over and over. The record is a monument, as moving a statement about death as has ever been made. Twenty-two year-old me would have loved it, and loved talking about it. But it may well have taken the media environment of 2016 to show me how to have that conversation — in public, no less.

I don't know how much of this revelation comes from a change in the industry, and how much is just my own senses becoming more finely attuned, but the sheer plurality of black voices that move through my social timelines and podcast feeds these days is such a rich, resplendent comfort. When you can follow the work of not just a handful of black writers and commentators, but dozens upon dozens, running on their own or within enshrined institutions, you stop focusing on how different their perspectives are from the rest of the world — and begin to take notice of the many differences among them. You witness their minor debates, and pick sides. You see and hear them making guest appearances in one another's territory. "Rep sweats" fade from the picture; instead, you take as a given that people of color do and make and like all kinds of things.

And so, to toast the 10th birthday of The Black Parade, I called up two black writers whose work I adore and whose taste I admire, to have the exchange of ideas I wish I'd known how to have way back when. Here's hoping it reaches a few brown kids still learning how to trust themselves.