Accessibility links
Lil Wayne's Rikers Island Memoir Only Tells Half The Story : The Record Gone 'Til November, transcribed from the journal he kept while at Rikers, isn't particularly revealing, but it offers a chance to stop and take stock of where the rapper has been since. 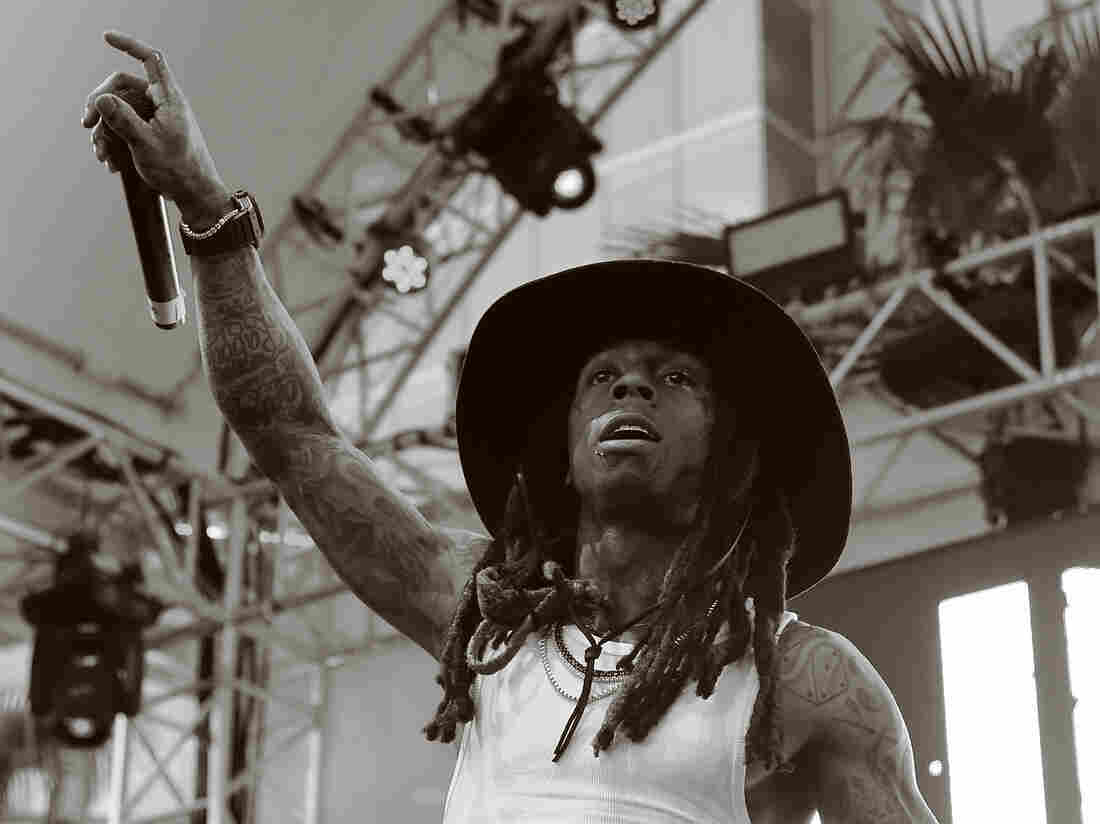 Lil Wayne performing in Las Vegas in 2015. His memoir, Gone 'Til November, is out now. Ethan Miller/Getty Images hide caption 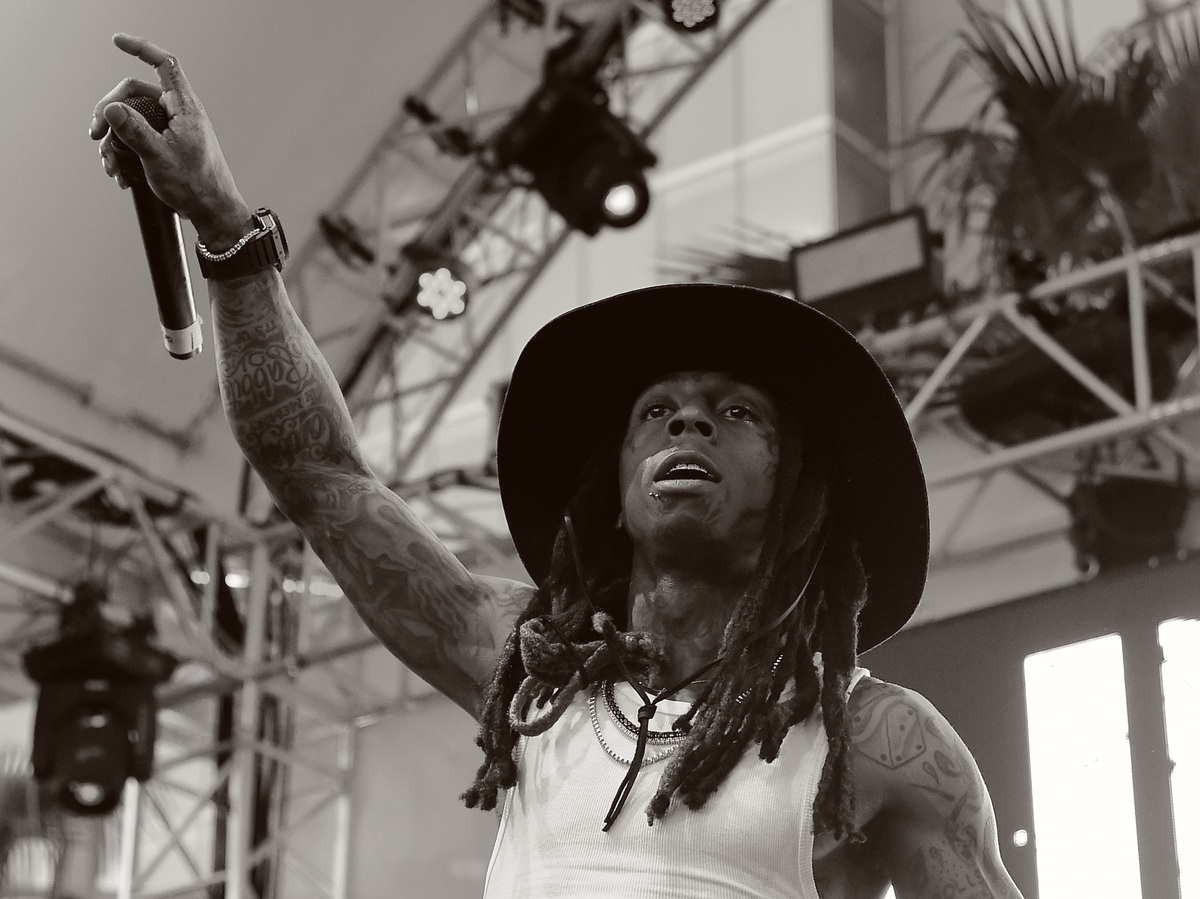 Lil Wayne performing in Las Vegas in 2015. His memoir, Gone 'Til November, is out now.

Lil Wayne's prison memoir, Gone Til November, is — like his two Sorry 4 The Wait mixtapes — framed as a stopgap offering to quell fan's appetites during an unexpectedly prolonged wait between official projects. There's no reason not to believe that the book was, as advertised, transcribed directly from the journal Wayne kept during the eight months he spent incarcerated at Rikers Island in 2010, largely because the entries are pretty mundane: He eats a lot of sugar, watches sports and American Idol, plays cards and does push-ups. He reads Anthony Kiedis' autobiography and answers fan mail. He prays. Mindful of the unwanted attention his celebrity will bring, he keeps to himself a lot. Life on the inside is stressful, sometimes frightening, often frustrating, but most of all, really boring.

If Gone Til November itself offers no major revelations as to either prison life or the rapper himself, it does come at an interesting time to consider Lil Wayne. When he began serving his sentence, Wayne was buoyed by the massive creative, commercial and critical triumph of 2008's Tha Carter III, plus a couple of highly solid mixtapes and a flood of feature appearances. (He was shining so bright that fans even forgave the critical flop Rebirth, the "rock" hybrid released while he was in prison.) And things were about to get even bigger; he had just signed both Drake and Nicki Minaj, the acts that would make it a global powerhouse, to his Young Money Entertainment subsidiary.

The Wayne of late 2016 is in a much different place. Just about five years after his release from actual prison, he unleashed the now-infamous stream of tweets declaring himself a "prisoner" to Cash Money and to Bryan "Baby" Williams (a.k.a. Birdman) in particular, the label co-founder whose role in Wayne's life had been as much surrogate dad as boss. The fallout from his repudiation of Cash Money has dominated Wayne's public self for two years now, from the rapper's ongoing $51 million breach of contract suit (filed in New York, withdrawn and refiled in Louisiana) to both veiled and overt lyrical potshots taken at the label and its owner.

The break between Cash Money and Wayne is big news, of course, due to the wattage of fame and amount of money involved, but it's also shocking because for so many years, Lil Wayne was Cash Money. In 1992, when Baby and his brother Slim slapped the label together out of sweat and hustle, it was just one of many scrappy indies putting out rap tapes and CDs in New Orleans. Much of its initial roster — Kilo G, Pimp Daddy, and UNLV's Yella Boy — became casualties of New Orleans' record-setting mid-'90s murder rate before the label saw big-time success. Others, like Lil Slim and Cash Money's only two female signees, Ms Tee and Magnolia Shorty, were either cut loose or left before the brothers signed their landmark, career-making distribution deal with Universal Music Group in 1998, launching the gritty little outfit from the Third Ward onto a national stage.

Wayne, barely into his teens, was a big part of that ascension. The Hot Boys, the quartet that comprised him, B.G., Turk and a slightly older, already-known Juvenile, were the sound that had piqued Universal's interest, along with Juvenile's solo work. He'd gone fairly quickly from being a talented kid who acted in plays at a magnet middle school and left unsolicited bars on Cash Money's answering machines to being one of its hottest properties. The youngest of the Hot Boys – he was 12 when he and B.G. recorded their Cash Money debut as the B.G.'z – Wayne cleaved hard to the label. At the turn of the millennium, when B.G., Juvenile, and mastermind producer Mannie Fresh each in turn left Cash Money acrimoniously, citing financial disputes, he doubled down and stayed. Not for nothing, Wayne - the child of an absent dad and deceased stepdad - made his pseudo-filial relationship with Baby a big part of his public brand, from song and album titles to the infamous kiss photo. That image made it even more poignant when, in a HipHollywood interview last week, promoting the prison memoir, Wayne said of Baby: "His last name isn't Carter, baby, he's not family."

Up until the stint at Rikers Island, Wayne's star only went one way – up – ascending until he was New Orleans' most successful pop-music export since Fats Domino. A DJ on the New Orleans community station WWOZ, interviewing Dave Bartholomew – who discovered Fats and steered his career – apparently thought he was tossing the music impresario a softball during a recent on-air interview, when he made a disparaging comment about Wayne's music representing the city. It turned out that Bartholomew, who turns 98 this coming Christmas Eve, religiously tracked Wayne's chart positions in Billboard; anyone who repped New Orleans and made hits was worth his interest.

In August 2015, eight months after Lil Wayne lashed out at Cash Money, New Orleans was the site of a long, strange, exhausting series of events pegged to the 10th anniversary of Hurricane Katrina. There were parades, panel discussions, conferences, exhibits and a critical mass of local and national media to parse it all. The actual 10-year anniversary weekend at the end of August, with its climactic frenzy of commemorative activity, felt like it took over the city the way Mardi Gras does – a surreal, unavoidable, totally disruptive experience. Lil Wayne chose that weekend to throw a party called Lil Weezyana Fest in Champions Square, a 7,000-capacity outdoor space next to the Superdome, which sold out well in advance – mostly on the promise of the reunion of the Hot Boys, minus an incarcerated B.G. Packed out and electrified by the tweaky madness of the anniversary-weekend climate, the show felt cathartic: a blissfully nostalgic celebration where a beaming Wayne trotted out one old-school underground legend of local hip-hop and bounce music after another, from Fifth Ward Weebie to Ms Tee to DJ Jubilee to Master P, even, representing Cash Money's old rival No Limit.

The music that made Lil Wayne — those artists who survived Cash Money's unlucky first generation or were recording at the same time, hand-to-mouth — was largely music made by and for the population hit hardest by the aftermath of Katrina, and the show was an affirmation that they, and it, had made it through. Maybe only those acts, on that weekend, to that crowd in that city could make a surprise appearance from Drake feel extraneous – nice lagniappe, but not the point.

The last weekend of August 2016, the 11th anniversary of the storm's landfall, passed quietly in comparison to last year's fervor. The year prior had marked the city's progress toward recovery, considered how much is yet left to be done and, most importantly, honored the dead and displaced. But it had also for many been one nonstop trigger – a fresh reawakening of trauma everywhere you looked, while the whole world was looking at you.

Without the strangely festive setting, there was no way that the 2016 edition of Lil Weezyana Fest wasn't going to feel somehow smaller, and in the lead-up, it did. Tickets went up on Groupon, with the Superdome box office itself offering two-for-one deals. It did sell out in the end, and separated from the crazy experience that people in New Orleans referred to as K10, it was easier to see Lil Weezyana Fest as an extension of, well, Lil Wayne.

From the outside, his relationship with his home city had seemed complicated since the storm. Immediately in its wake, Wayne was ridiculously prolific, ratcheting up critical interest with increasingly great work – Carter II, Dedication and the landmark Dedication 2 – the last of which included the searing, masterful protest track "Georgia... Bush," which he performed live for the first time at the inaugural 2015 fest. But he and what was left of Cash Money (and what would become the Young Money juggernaut) also moved shop to Miami. The move seemed to leave New Orleans conflicted about Wayne, but – judging by the response to the initial Lil Weezyana Fest, announced soon after the public break with the label that raised him – that split, and the festival, swung local opinion back into his corner. And the capacity crowd at this year's event was as hyped as the K10 crowd, for aspects of both new Wayne – surprise guest Chris Brown and Collegrove collaborator 2 Chainz – and old, represented by '90s-vintage New Orleans acts like Partners N Crime, Mystikal and most amazingly, the Showboys, the New York duo whose 1986 track "Drag Rap (Triggerman)" is the foundational sample of bounce music.

After his term in Rikers, Wayne's wild ascent stuttered and paused; compared to anyone else, of course, he was insanely prolific and successful, but compared to mid-'00s Lil Wayne, it was an ebb. Gone Til November itself is fairly light and prosaic, but his erratic resume between his release and the book's publication tells its own story: less easily flowing work, the escalating battle with Baby, and the decision to excavate his creative history onstage with Lil Weezyana Fest's unusual lineups, back in his hometown.

Wayne's most recent feature, for Solange's "Mad," is some of the most powerful, and even most personal-seeming, work he's done. In half a dozen lines, it's arguably more of a revealing memoir than Gone Til November. On "Mad," the often-cryptic rapper seems to be talking bluntly about the conflicts of his whole career; the isolation of fame, the conflict between pride in his skill and success, and irritation with the way those things attract the needy, greedy and/or disloyal ("It's hard when you only got fans around and no fam around / and if you do then their hands are out / and they pointing fingers").

For a chunk of his career, Lil Wayne was essentially a child star, with — if the claims he's made about shady business practices at Cash Money are true — all of the attendant struggle that comes with that narrative. Now 34, he's been a professional recording artist for almost 25 years; he could put in another quarter-century and still not hit legal retirement age. Was it the Katrina anniversary that prompted Wayne to book a deep dive into his creative roots? Or was it the wrenching exit from the Cash Money monolith that had been home for more than half his life? The former appeared to be the impetus for the hometown festival in the first place, considering its timing at the peak of 10th-anniversary hoopla. But once that particular noise faded away, what was left was Wayne, celebrating the vibrant, eccentric city that had shaped his vibrant, eccentric talent, and looking toward whatever might come next, too.

Gone Til November, if maybe by its timing more than its actual content, is a reminder that over the past five years or so, Lil Wayne has been through the fire. He isn't out of it yet, but the festival – which plants his flag back in his town, and in his history – might be a sign that he's getting closer. So is the end of his appearance on "Mad," which, after all the anger and sadness and swagger, ends with Wayne exhorting himself – or somebody – to "let it go."