Accessibility links
A Tribe Called Quest Stands United, One Last Time : The Record Two decades after splitting up, the pioneering rap crew released its final album Friday. We Got It from Here mines sounds from across hip-hop's history, but the content is bracingly of the moment. 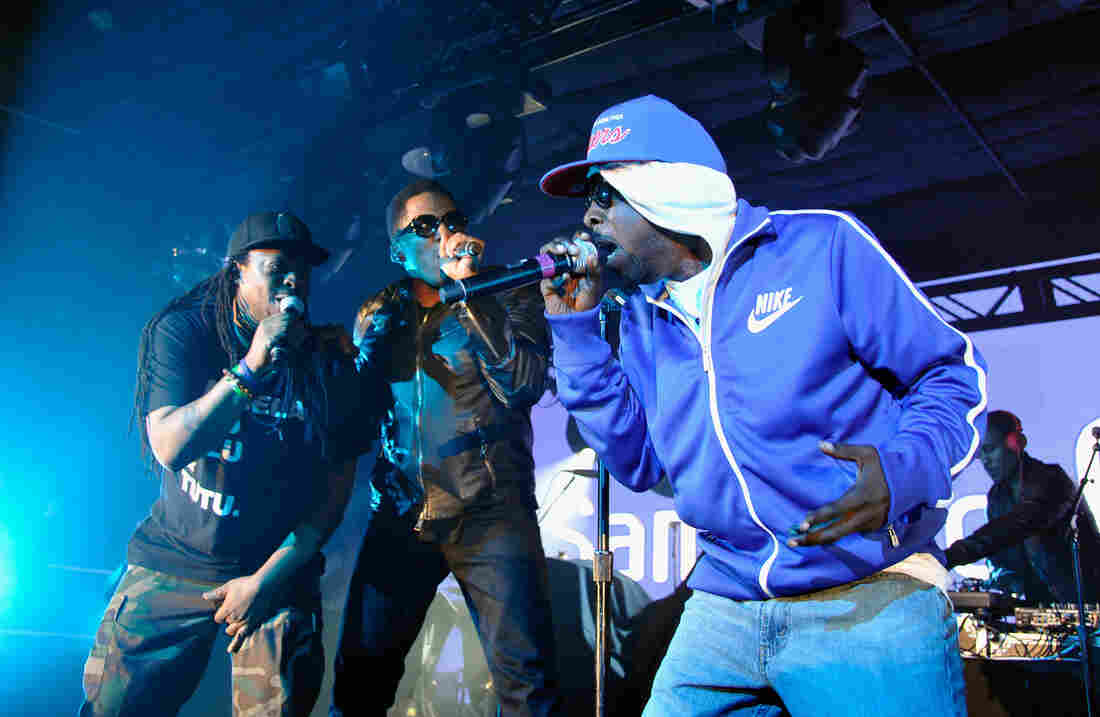 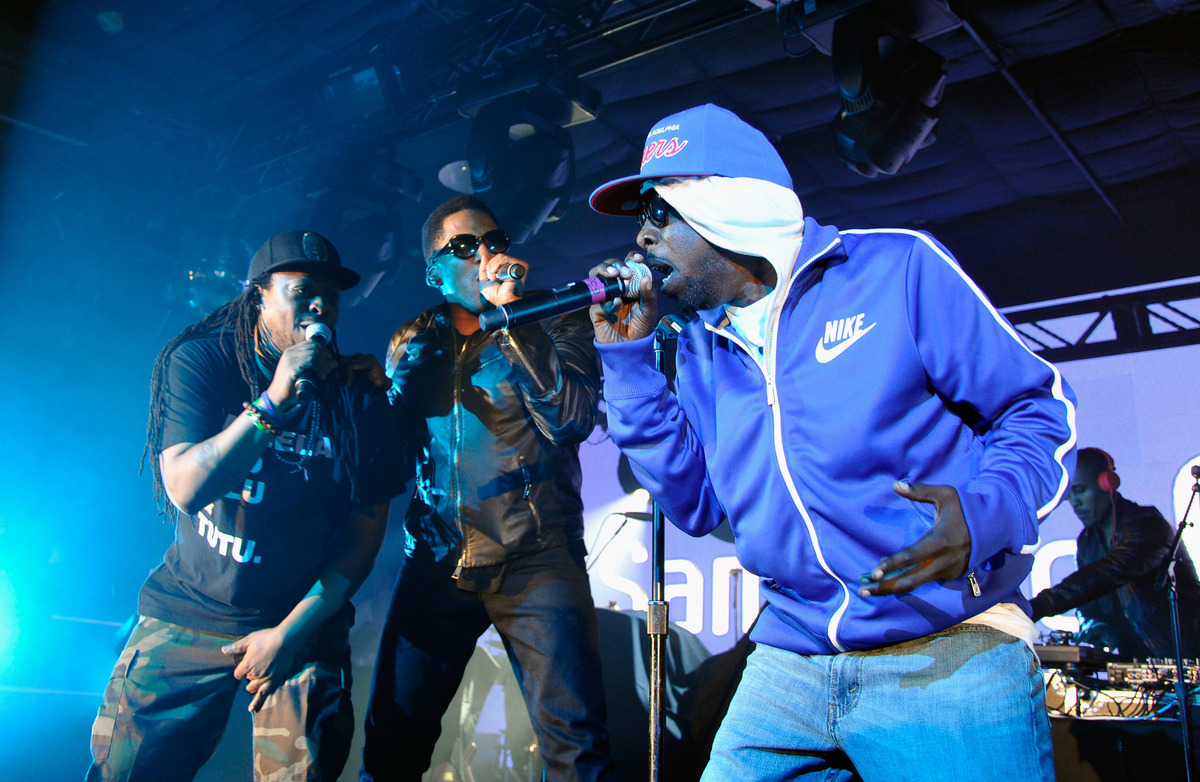 Explaining the return of A Tribe Called Quest to the pop firmament is nigh impossible without hyperbole, so here goes: Imagine The Beatles had reunited to give us all one last classic, something as substantive as Abbey Road — instead of "Free as a Bird," the quaint single the Fab Four released 25 years after breaking up. Tribe wasn't the first hip-hop act to try sensitivity (after all, LL Cool J's "I Need Love" predates the group's 1990 debut, People's Instinctive Travels and the Paths of Rhythm). But the members — Q-Tip, Phife Dawg, DJ Ali Shaheed Muhammad and Jarobi White — brought an everyman aspect to rap at a time when it was dominated by groups of outsized, superheroic stature: Run-DMC, N.W.A, Public Enemy. The release today of new music from the venerated crew, 18 years after what was supposed to be its final album, is that impossibly rare musical event: a long gone, much beloved act reappearing with its creative powers intact.

We Got It from Here... Thank You 4 Your Service is both a reunion and a tribute, arriving just a few months after the death of Phife Dawg, whose lyrical interplay with fellow MC Q-Tip was the backbone of the group for much of its history and who contributed to the album before succumbing to complications from diabetes in March. In that way, the album is a throwback, the first true collaboration between Tip and Phife since the group broke up in 1998. But within its first few tracks, We Got It from Here announces itself as a product of its moment.

"The Space Program," a treatise on black unity, kicks off the album with an instructive spoken-word sample: "It's comin' down hard. We've got to get our s*** together." A head-snapping snare and kick drum introduce "We the People," in which Q-Tip details an America hostile to African-Americans, Mexicans, Muslims, gays and the poor. The opening verse of "Whateva Will Be" could be the height of Phife's lyricism on any ATCQ track ever. "So am I 'posed to be dead or doin' life in prison? / Just another dummy caught up in the system," he begins, examining society's expectations for him as a black man before finally proclaiming, "F*** you and who you think I should be, forward movement."

'We Didn't Wanna Be Anybody Else': A Tribe Called Quest Reflects On Its Debut

Sonically, We Got It from Here picks up where the best of Tribe's work, in particular the winning streak of People's Instinctive Travels, The Low End Theory and Midnight Marauders, left off. At a time when James Brown samples were ubiquitous in hip-hop, Tribe's early albums gravitated instead to outlier sounds: snippets of Jimi Hendrix, Ron Carter and more obscure 1970s jazz. "Can I Kick It?", one of the most essential songs of the ATCQ oeuvre, samples the famous twin bass line of Lou Reed's "Walk on the Wild Side"-- a move that attracted rock fans like Jack White to the group's fan base. We Got It from Here features White's guitar playing on "Lost Somebody" (a Phife dedication by Tip and Jarobi) and the superlative "Ego." Elton John, the kind of artist that the Tribe of the early '90s could only have conjured by sampling, appears in the flesh on "Solid Wall of Sound," interpolating his own lyric from 1973's "Bennie and the Jets."

White and John are only two of a packed list of guests. Kanye West delivers the hook on "The Killing Season," which also features Talib Kweli, and André 3000 trades electric verses with Q-Tip on "Kids...". Observant fans will recognize those rappers as part of a lineage, all direct descendants of the ATCQ style in one way or another. On "Dis Generation," Q-Tip hat tips Joey Bada$$, Earl Sweatshirt, Kendrick Lamar and J. Cole as other "extensions of instinctual soul," and Lamar himself shows up on "Conrad Tokyo." Consequence and Busta Rhymes, both of whom guested on Tribe records in the '90s, go toe-to-toe on "Mobius." "Movin Backwards" features the modernist Anderson .Paak, whose brilliant sophomore album, Malibu, might be We Got It from Here's only competition for hip-hop album of the year.

Perhaps the most stunning revelation here is Jarobi White's evolution into a stand-up MC. On People's Instinctive Travels, he was a master of ceremonies, hosting the album in a running musical skit. He backed away from the studio after his rhymes for The Low End Theory didn't make the final cut, and eventually chose culinary school over a rap career. Now, on "The Space Program," "The Killing Season" and "Movin Backwards" in particular, he makes a vital, impressive return.

Groups have largely faded from view in rap music, and so the mere existence of We Got It from Here, a true team effort, feels vintage. Even the way Q-Tip repeats Phife's rhymes underneath him on "The Space Program" sounds as old-school as the Cold Crush Brothers. And on "Solid Wall Of Sound," with Phife flexing his Trinidadian roots with patois-inflected lines, you can hear Tip flipping his usual flow ("Like marauders on a mission when we killin' dancehalls," he offers) in order to keep up. Though he's always been the group's main producer and its most visible member, thanks in part to a matinee idol aura that landed him roles in films by Spike Lee and John Singleton, Q-Tip takes an egalitarian approach on this album, ceding the mic entirely on some songs to showcase his partners.

Even so, he grants himself the last word on "Ego," technically the penultimate song but a stronger conclusion than closing track "The Donald." "This is the last Tribe and our ego hopes that you felt us," he says, indicating that with this release, A Tribe Called Quest may truly call it quits. If so, long live A Tribe Called Quest.