Richard D. James, aka Aphex Twin, made his first U.S. appearance in eight years at Houston's Day For Night festival.

If there was one moment in Houston on Saturday night that brought meaning and context to Aphex Twin's first U.S. performance in eight years, it was when the storm arrived, about 30 minutes in.

Until then, the rave and drum 'n' bass sounds the producer born Richard James was mixing together — from behind a wall of video screens depicting global targets detonating in the shape of smiley faces and Aphex Twin logos — were familiar, peculiar, somewhat mental but hardly seismic. Yes, the capacity crowd gathered at the outdoor Red Stage of Day For Night — a boutique festival taking place in and around the newly abandoned Barbara Jordan Post Office — was swaying in tide-like unison. Yet despite the novelty of the moment, the energy at the end of this muggy, musical day seemed more curious than engaged.

Which is when the cold front entered. Some knew it was coming, a 70 percent chance of rain, an expected 12 to 15 degree drop over two hours, and yet the surprise still hit chillingly. Whoops and hollers from the crowd grew into a sustained roar. James' set began buzzing with additional focus and ominous rhythmic intent. Dancing intensified spasmodically as the first cold drops of rain set the stage crew scurrying to lower the big screens. Physical and psychic hatches were being battened down. Blast off was set to take place in five, four, three...

As the freezing drizzle turned hard and bitter, the merely curious took cover in the porta-potty encampment. This left more room for James' true disciples to revel in having their cult leader to themselves. Deep in the audience an umbrella with the Aphex logo began a demented Gene Kelly twirl above the crowd. The music intensified further, deeper into jazzy breakbeats and the acid lines of the TR-303 bass synth (like a take on Aphex's 1991 classic "Didgeridoo"). Smiles broadened as the elemental chaos of a mid-December gale and techno-rave cacophony crashed into one another.

On one level, the performance was employing basic call-and-response ad libs — James reading the setting and the crowd, then imbuing each moment with new elements. It was also great theater on a grand stage, a rare talent answering near-impossible expectations with a performance beyond prospect or reproduction. Most importantly, it was both poetic and funky, Aphex Twin as a rave Prospero, gathering storms and pushing his flock toward a blissful abyss to force 2016 out the door.

When first announced last summer, the circumstances of Saturday night's show sounded like part mystery and part absurd joke. Why, having performed in the U.S. only a few times since 1997 — when, buoyed by Chris Cunningham's legendary "Come to Daddy" video, Aphex Twin was in heavy MTV rotation and on the verge of alt-electronica stardom/notoriety he approached with disdain — did James suddenly choose to play a relatively small, second-year festival taking place the weekend before Christmas, in Houston, of all places? And who'd go? 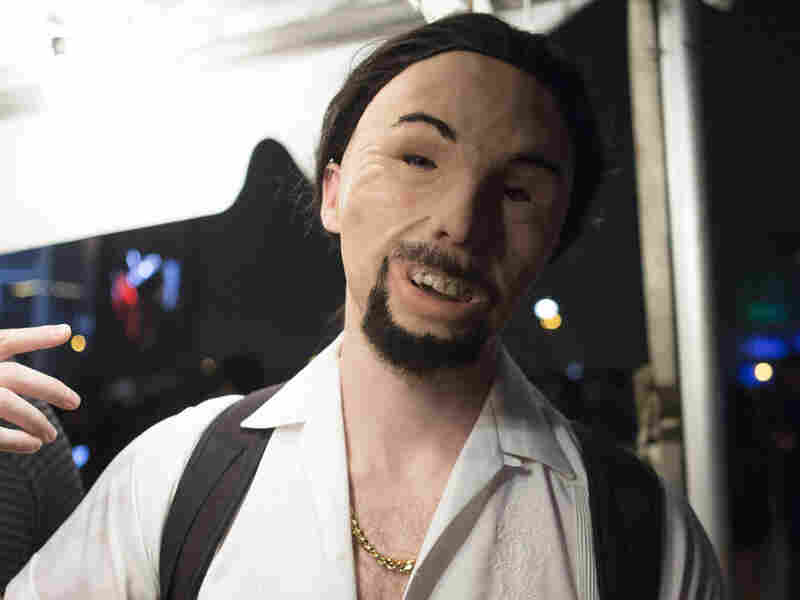 One of Aphex Twin's true disciples poses for the camera at Day For Night. Kate Glicksberg for NPR hide caption 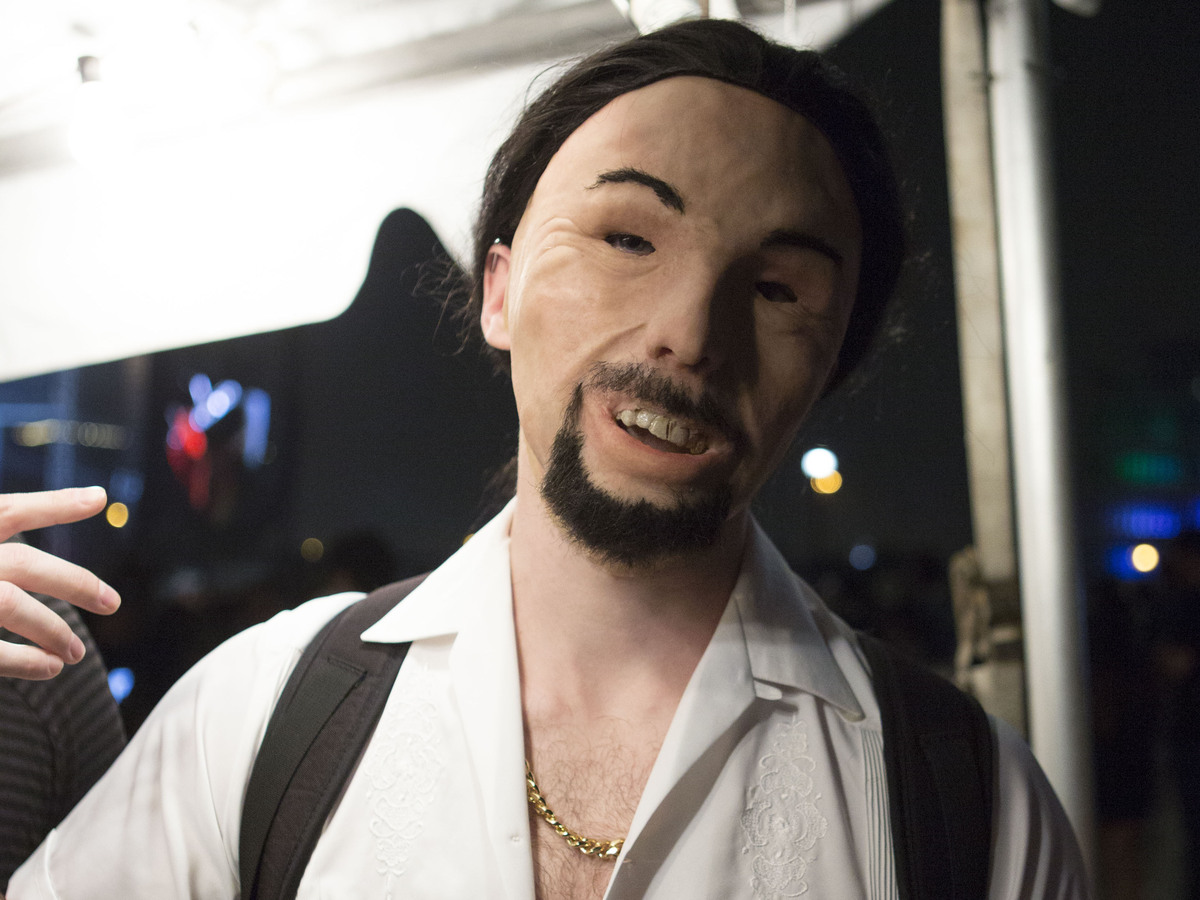 One of Aphex Twin's true disciples poses for the camera at Day For Night.

Over a quarter-century career, the 45-year-old producer has become more than just an iconic figure in electronic music. He's transcended his rave roots — with co-signs now stretching from Beck, Radiohead and Skrillex, to Philip Glass, Donny McCaslin and the London Sinfonietta — as has his audience. Some of the punters losing perspective at the Red Stage on Saturday night weren't alive, much less raving, when James cemented his reputation as a 1990s figurehead of techno and IDM (though he always preferred his own term, "braindance"). And many of those old enough to have known about him never subscribed to the dance culture that was AFX's breeding ground.

Some were indie-rockers and goths who came for James' ambient melodies and portentous digitalia. Others were avant-garde classical aficionados, gearheads seduced by the uncommon use of analog technology, or modern-day pyschonauts lured by James' attraction to the psychedelic experience's darker side. The volume of his musical output — even when it slowed down to a trickle of vinyl and Internet leaks between 2008-14 — allowed for all these groups to remain satiated all these years later.

Looking behind Houston's cultural stereotypes explained why it was a great gathering spot for these disparate tribes. Site of Ken Kesey's final acid test and longtime home to NASA's Johnson Space Center, the city retains a mystical and technological gravitas that quietly informs its identity — with its heavens-exploring art (numerous James Turrell works, the Mark Rothko chapel), and the irreproachable effects of its sonic legacy (thanks largely to DJ Screw's codeine-fueled chopping and screwing) being globally recognized qualities among the kinds of seekers James attracts. It was hardly a surprise that Aphex Twin logos could be spotted throughout the arts districts, bass pumping out of rental cars. 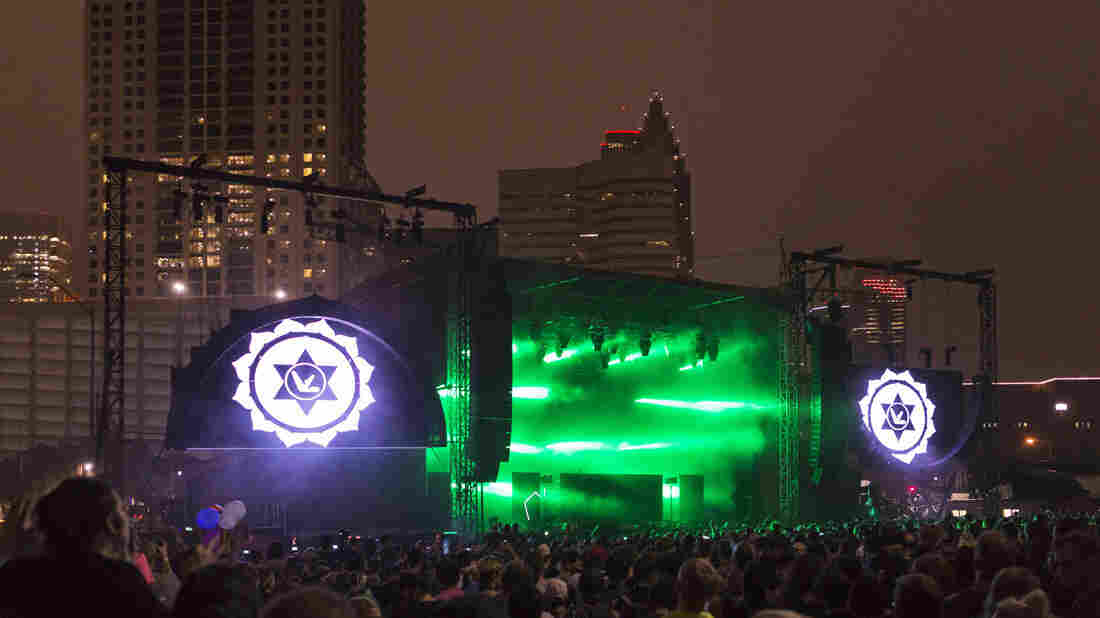 Aphex Twin's show at Day for Night in Houston, Texas was his first live performance in the U.S. in over eight years. Kate Glicksberg for NPR hide caption 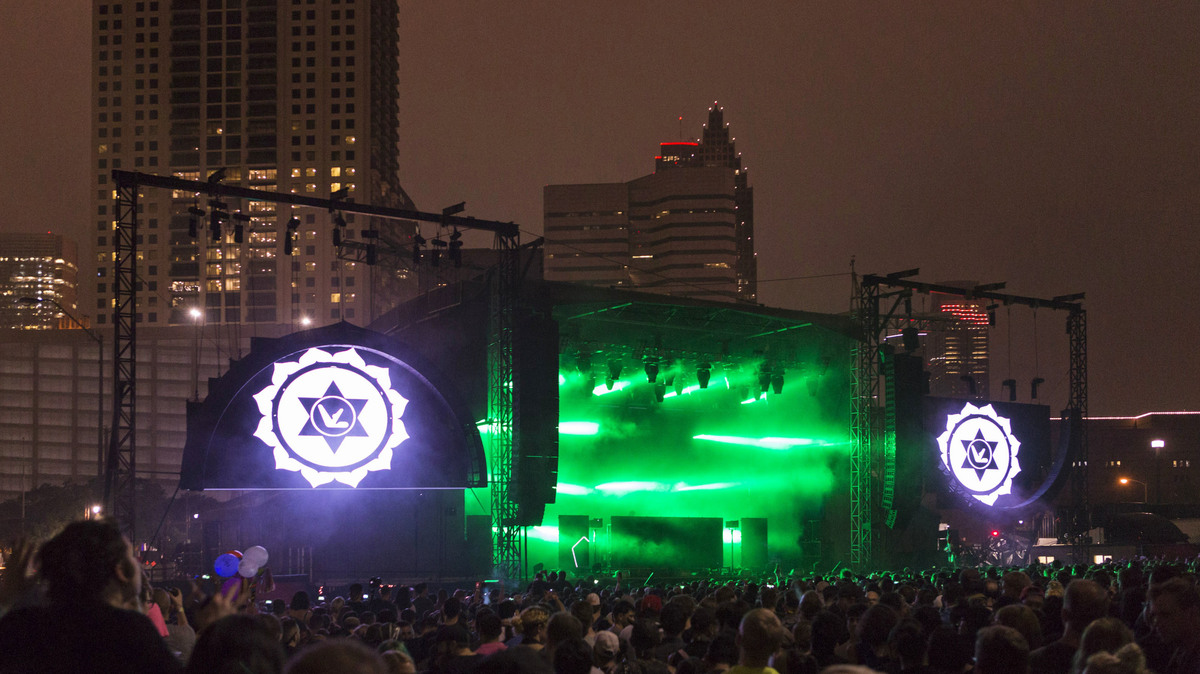 Aphex Twin's show at Day for Night in Houston, Texas was his first live performance in the U.S. in over eight years.

Inside this framework, it was impossible not to recognize Aphex Twin's appearance as the weekend's main event, a point made clear by Sunday's markedly lower attendance. And pity the great Run The Jewels, scheduled against James on another stage — especially El-P, whose own productions owe some of their bite to James' sonic recipe for beatwise dirt.

You could sense it in James' approach too. His Day For Night merch included a new limited-edition piece of music on vinyl (sold out before most people had even arrived on-site) branded with the performance's site and date; and his endless collage of a set, scrupulously documented by the army of trainspotters who are his cult's card-carrying members, included other people's music so far-flung and of the moment (Andy Stott, unreleased Jlin tracks, EPROM, Powell, Ólafur Arnalds & Nils Frahm, et al.), that everything about its construction displayed a seriousness. (And when alerted to the goings-on, some artists responded in kind.)

But nothing subdued the comedic characteristics that are the secret weapons of Aphex Twin's music — the shrill synthetic qualities that underpin the melodic beauty, the breakneck pacing augmented by otherworldly serenity. In James' madcap hands, these drastic shifts of sound and atmosphere have the capacity to bring forth laughter in a way almost no one else in modern electronic music can.

According to numerous tweets, toward the end of Saturday night's performance, as the speed and intensity kept rising, Björk could be spotted side-stage dancing in the rain, smiling, beaming. It was a party in the throes of catharsis. How often can you say that about a festival DJ set?