Accessibility links
For The Inauguration, Trump's Music Picks Look A Lot Like Richard Nixon's : The Record As candidate and then president-elect, Donald Trump has been all about breaking molds. But the musical artists performing at his swearing-in ceremony reflect nothing so much as well-worn tradition.

For The Inauguration, Trump's Music Picks Look A Lot Like Richard Nixon's

For The Inauguration, Trump's Music Picks Look A Lot Like Richard Nixon's 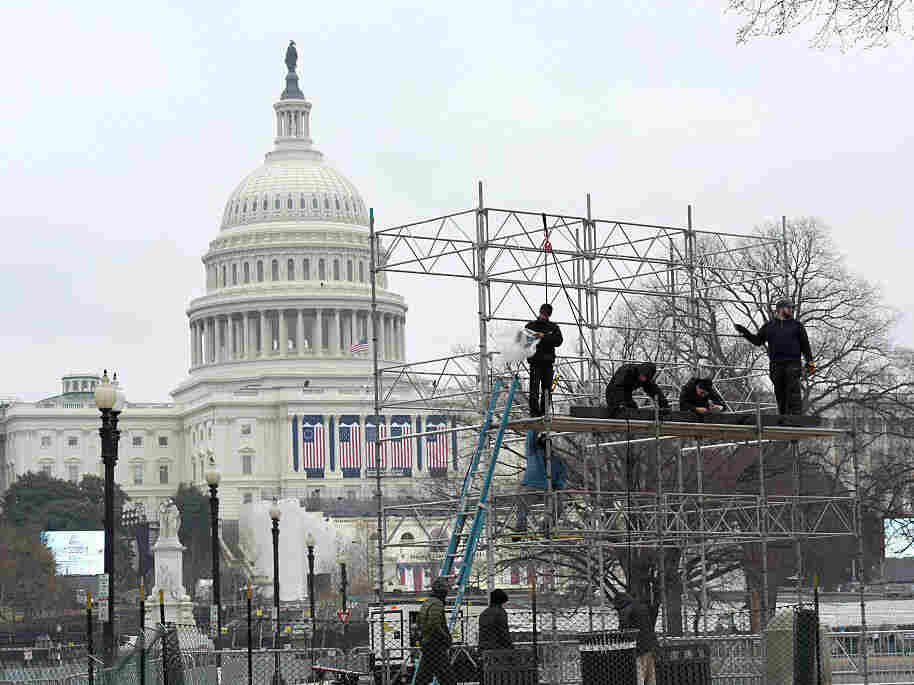 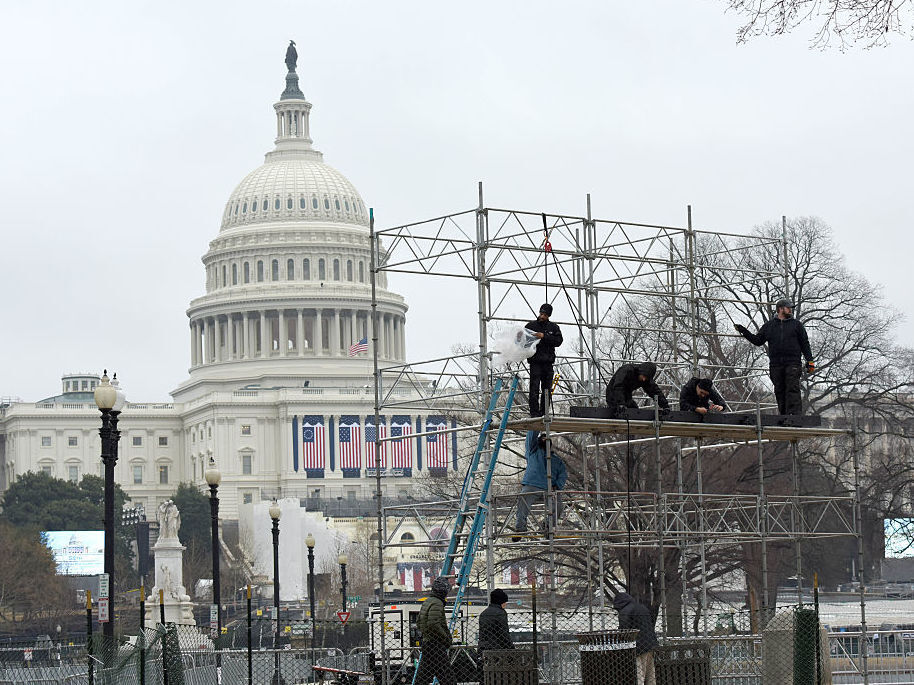 Workers prep a stage for the inauguration of Donald Trump on Capitol Hill on Jan. 17.

There's been a lot of pop-culture chatter about who is performing at Donald Trump's inauguration Friday — and who has refused, as well as who was or was not ever asked.

For critics of the incoming administration, the travails of those trying to book these gigs have been the stuff of comedy and derision; for Trump's team, the stance — at least publicly — has been that the lineup is exactly what they have always envisioned for this event: an inauguration for the people, not for the stars. "This is not Woodstock," the inauguration's director of communications, Boris Epshteyn, told CNN in December. "It's not summer jam. It's not a concert." One of the oddest moments of political spin came from Tom Barrack, the head of Trump's inauguration planning committee. Using a particularly curious turn of phrase, he told a pool of reporters earlier this month: "What we've done instead of trying to surround him with what people consider A-listers is, we are going to surround him with the soft sensuality of the place."

Regardless of how Trump got to his list of eventual performers, a glance at the historical record reveals that tomorrow's ceremony for the first president to emerge into public consciousness via tabloids and then reality television looks a whole lot like a throwback to inaugurations of an earlier era. Trump's invitees for the swearing-in ceremony include the U.S. Marine Band, the Mormon Tabernacle Choir, teen America's Got Talent runner-up and current classical crossover moppet, Jackie Evancho, and The Rockettes. (The disputes within the Rockettes organization and with James Dolan, the head of their parent company, Madison Square Garden, have become infamous. And the Mormon chorus, which has sung for five other presidents' inauguration festivities, is weathering some heated internal backlash regarding the Trump performance. At least one member of the ensemble has quit.)

The so-called "A" list celebrities are all wanting tixs to the inauguration, but look what they did for Hillary, NOTHING. I want the PEOPLE!

In an interview with CNN's Erin Burnett two days ago, Barrack reasserted that the inauguration planners had a specific vision in mind. When Burnett asked why Kanye West, who has expressed support for Trump and met with him in New York in December, wasn't going to be performing, Barrack responded: "We haven't asked him. He's been great, he considers himself a friend of the president-elect, but it's not the venue. The venue we have for entertainment is filled out, it's perfect. It's going to be typically and traditionally American."

By that measure of what's "typically" and "traditionally" American, Trump's team is reifying certain parameters of what is worth memorializing and celebrating in American culture. The resulting lineup evokes nothing so much as the first inauguration of Richard Nixon, at another tumultuous time in American history.

Nixon also invited both the Mormon Tabernacle Choir and the Marine Band to perform at his 1969 inauguration. Like Nixon, Trump has invited mostly white artists to mark his swearing-in — choices that may have seemed culturally appropriate to the 1960s establishment but strike many observers as alienating and even bewildering nearly half a century later.

That's not to say that the Nixon-related festivities didn't have at least one moment of outright weirdness: James Brown sang "Say It Loud — I'm Black And I'm Proud" at the All-American Gala two nights before Nixon's inauguration in January 1969. Brown went on to endorse Nixon during his second presidential campaign in 1972, which led to boycotts and protests against his shows. (Over the course of his life, Brown's political alliances wandered from Lyndon Johnson to Strom Thurmond.) If an event for Nixon could feature an anthem of black power sung by one of the biggest stars of the day, what would it mean if West performed "Blood On The Leaves" or "Black Skinhead" at one of the Trump events?

The Nixonian-establishment feel to Trump's roster feels especially discordant considering how much of the president-elect's campaign relied on a populist message. Let's look back to the Inauguration Day of another anti-establishment incoming president: Andrew Jackson. The doors of the White House were opened during his inauguration in 1829 to let the public in to celebrate — and as legend goes, a mob scene, possibly fueled by alcohol, broke out. According to accounts of the day, the teeming crowd smashed glasses, broke furniture and ruined rugs.

Putting the possibly drunken chaos of Jackson's inauguration aside, there's a longtime tradition of incoming American presidents inviting amateur ensembles to perform at their inaugurations — and the "of the people" symbolism looms large.

The start of Harry Truman's second term was celebrated by a singing New York City cop turned professional entertainer named Phil Regan, who emceed the occasion and performed "The Star-Spangled Banner." Many presidents have invited young and amateur performers from their own communities. In 1977, Jimmy Carter invited students from several historically black colleges in Atlanta to sing "The Battle Hymn of the Republic." Four years later, at Ronald Reagan's inauguration, an amateur vocalist named Juanita Booker — the daughter of a sharecropper — performed "The Star-Spangled Banner."

For many decades, music at the inauguration ceremony was the purview of military bands; occasionally, and especially following World War II, incoming presidents have also welcomed accomplished opera singers to usher in their terms in high-art terms. That trend began with Dwight Eisenhower, who invited the black soprano Dorothy Maynor and the white tenor Eugene Conley to sing at his first inauguration in 1953.

While popular musicians have long performed at the inauguration galas and parades, it's only much more recently that they've appeared on Inauguration Day itself. For example, George W. Bush was serenaded by a cavalcade of video stars like Ricky Martin, Jessica Simpson and 98 Degrees, not to mention Destiny's Child, at his inaugural ball in 2001. Even so, Bush took a more staid road when it came to his swearing-in ceremonies, with performers like the Marine Band, the Naval Academy Glee Club and students from the University of Louisville. Similarly, Bill Clinton went for musical selections and performers that telegraphed American heritage: For both of his inaugurations, Clinton, like Carter, invited choirs from historically black colleges as well as opera singers Marilyn Horne and Jessye Norman.

The idea of pulling pop-culture superstars into the inauguration proper came to its fullest expression with our 44th president, whose first inauguration included Aretha Franklin and Yo-Yo Ma among the performers — and then whose second inauguration ceremony included James Taylor, Kelly Clarkson and Beyoncé (who, as previously noted, also performed for George W. Bush as part of Destiny's Child). Historically speaking, it's really President Obama who has been the outlier when it comes to adding splash and spangle to the pomp and circumstance of Inauguration Day.

Trump's team has tried to go with bigger pop-culture names for a concert Thursday afternoon called "The Make America Great Again! Welcome Celebration," which will take place on the steps of the Lincoln Memorial. It's slated to feature country stars Toby Keith and Lee Greenwood, actor Jon Voight and rock act 3 Doors Down, who scored chart hits in the late 1990s and early 2000s. As of yesterday evening, the artists listed on the official website of the "MAGA!" show included singer Jennifer Holliday (who in fact announced on Jan. 14 that she would not be performing, after receiving negative feedback from the LGBT community). Two days ago, soul legend Sam Moore (of Sam and Dave) signed onto the "MAGA!" bill, telling the Associated Press that he requested to perform in Holliday's place.

The "MAGA!" event also includes The Piano Guys — a quartet of YouTube stars. Like other featured performers The Rockettes and Jackie Evancho, who have publicly worked out their feelings about the Trump inauguration invitation, The Piano Guys decided to publish a statement in response to their fans.

The Piano Guys are all members of the Church of Jesus Christ of Latter-day Saints, and the note refers heavily to their religious beliefs and historical precedent. In the statement (which is unbylined but is written in the first person), a member of The Piano Guys compares the group's decision to that of the legendary black contralto Marian Anderson, who sang the national anthem at both Eisenhower's second inauguration in 1957 and at John F. Kennedy's in 1961.

Anderson's inauguration appearances were particularly resonant with meaning after she was denied a 1939 performance at Washington's Constitution Hall. She subsequently delivered "one of the most important musical events of the 20th century," an open-air concert for 75,000 at the Lincoln Memorial that was a watershed in American history.

Regardless of the lack of parallels between Anderson's situation and their status as a mostly white (and completely nonblack) group, the unnamed Piano Guy continues: "We look to Marian Anderson — one of history's bravest proponents of civil rights — an African American woman who sang for two inaugurations in a divided, segregated nation, despite being treated by many in that nation with unthinkable prejudice and baseless hatred. She once said, 'As long as you keep a person down, some part of you has to be down there to hold him down, so it means you cannot soar as you otherwise might.' "

Given the heavy scrutiny and criticism surrounding the performers who are performing at the Trump inauguration, it's most interesting to watch these musicians lay out their arguments and calculus for their individual decisions, and grasp at context and meaning for their choices, in such public ways. What's equally compelling is to see that despite Trump's gift for stagecraft, talent for creating his own media cycles and proclivity for upending expectations and norms, his choices wound up being just so traditional.