Accessibility links
Migos Rapped A Children's Book. It's Funny, But It Makes Perfect Sense : The Record The three MCs behind the current No. 1 song in the country have a knack for finding the sensuous contours of the English language — a trait they share with the author of Llama Llama Red Pajama.

Migos Rapped A Children's Book. It's Funny, But It Makes Perfect Sense

Migos Rapped A Children's Book. It's Funny, But It Makes Perfect Sense 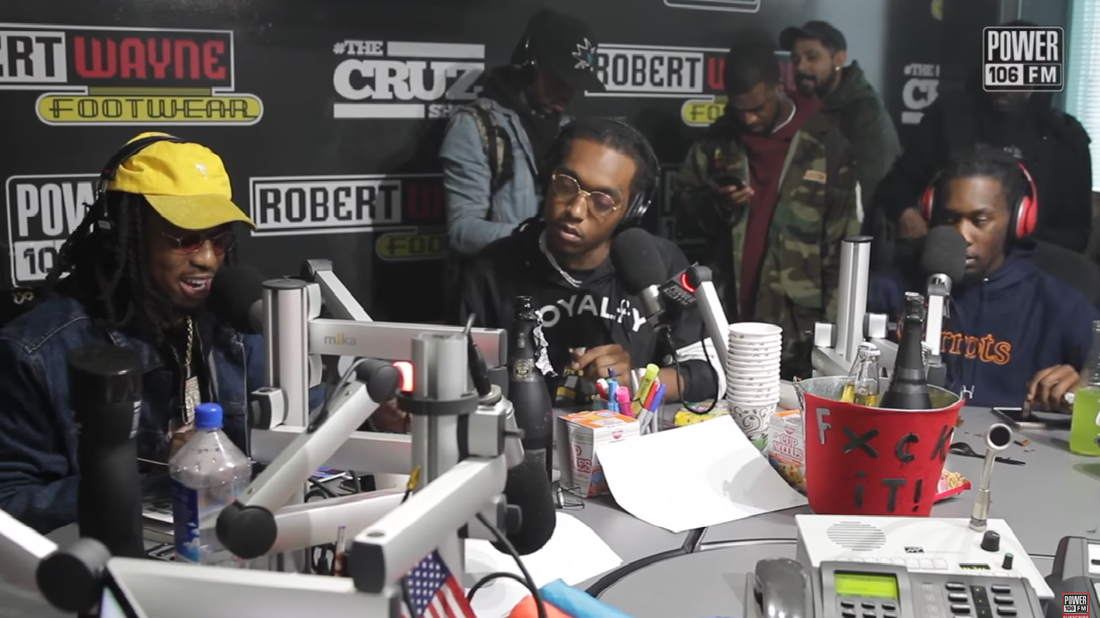 Migos rappers Quavo, Takeoff and Offset at the studios of Power 106 on Monday. YouTube hide caption 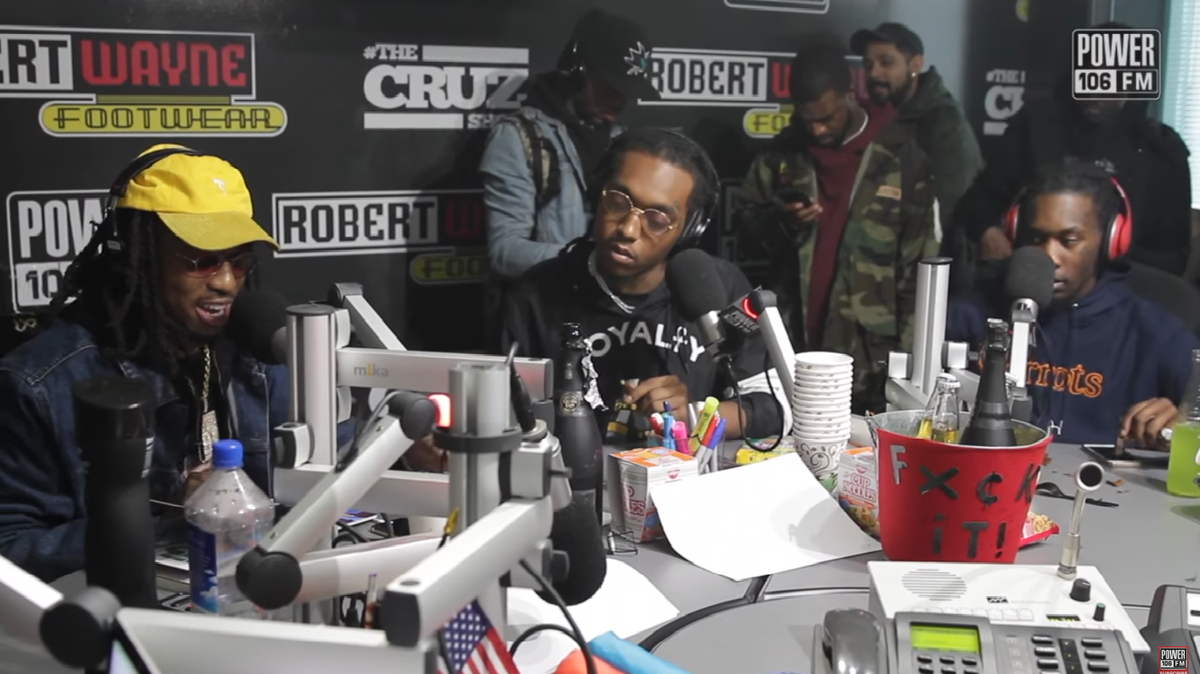 Migos rappers Quavo, Takeoff and Offset at the studios of Power 106 on Monday.

It's been a strange week. Tensions are high. If you haven't yet, you should probably take a break to watch Migos rap a children's book.

Llama Llama Red Pajama is a story by Anna Dewdney about a baby llama getting tucked in for bed by his mama. Migos is the motor-mouthed rap crew responsible for "Bad and Boujee," a catchy trap anthem that is currently the No. 1 song in the country. (Culture, the group's second album, is out today.) The moment that turned the trunk-shaking, meme-spawning single into an ersatz lullaby came Monday at the studios of Los Angeles radio giant Power 106, where morning host J Cruz asked MCs Quavo, Takeoff and Offset if they'd try reading the book over the beat to their hit on air.

Migos isn't the first to do this: The Cruz Show has lately made Llama Llama Red Pajama a regular gauntlet for artists in the interview chair, who are asked to recite the words in their signature cadence and embellish as they see fit. D.R.A.M. and Jeezy both accepted the challenge and did fine, approaching it with humility and quiet bemusement. Both clips were served to YouTube for easy sharing — but neither has had a fraction of the impact of Migos' appearance, retweets of which number more than 100,000. So what is it about this one?

For one, it's an uncanny match of performer and material. Migos' flow is a genre unto itself, deadpan observations that fly out of the speakers in bursts of machine-gun staccato. The trio's songs hammer words and phrases into new meaning by way of sustained, ardent repetition. Llama Llama Red Pajama has that DNA in its title alone, a phrase whose inherent rhythm can be shouted into a slogan — compare its meter to "Liar, liar, pants on fire" or "Remember, remember, the 5th of November." And as in the rest of Dewdney's Llama Llama series, the book is full of tongue-twisting internal rhyme, the kind a child trips over at first and then becomes determined to master. The three rappers make their way through the text easily because it's in an aesthetic language they already speak.

But perhaps more important is the atmosphere in the room, which is a mixture of delight and anticipation — because no one there, from the DJs to the entourage to the group itself, knows what's going to happen from one line to the next. Watch the artists' faces as the song gets going: They might be smiling, but they aren't joking. Handed a task that's ludicrous on its face, they treat it with the focused intent a rising MC devotes to the in-studio freestyles that are a more traditional rite of passage on rap radio. And because they take it seriously, the door is opened to the kind of magic moments you see in disciplined improv: One player introduces a setup ("Mama kisses baby's hair"), the next carries it forward ("The mama, the mama, the mama, the mama") and the last takes it home ("Whoo! MAMA.") They know their roles instantly, without a word of preparation.

One can't help wondering what Dewdney, who died in September, would have made of this reading. We do know her work was meant for children to hear aloud: There's a coiled-up joy in the shapes of these words, waiting to be loosed by an eager voice (watch the author's own performance if you need proof). That Migos, who has built a career on the most sensuous contours of the English language, could unlock the same joy in adults is both lucky and very, very funny. But it isn't at all surprising.

Stream Migos' 'Culture' In Its Entirety