Should Anyone Expect Pop Stars To Lead The Resistance?

Should Anyone Expect Pop Stars To Lead The Resistance? 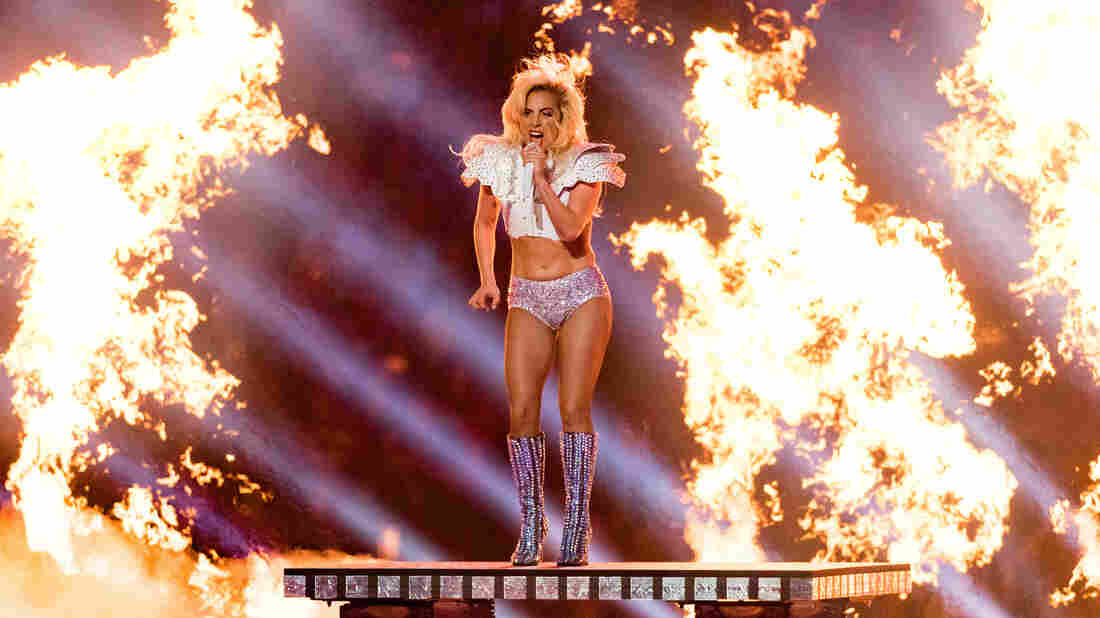 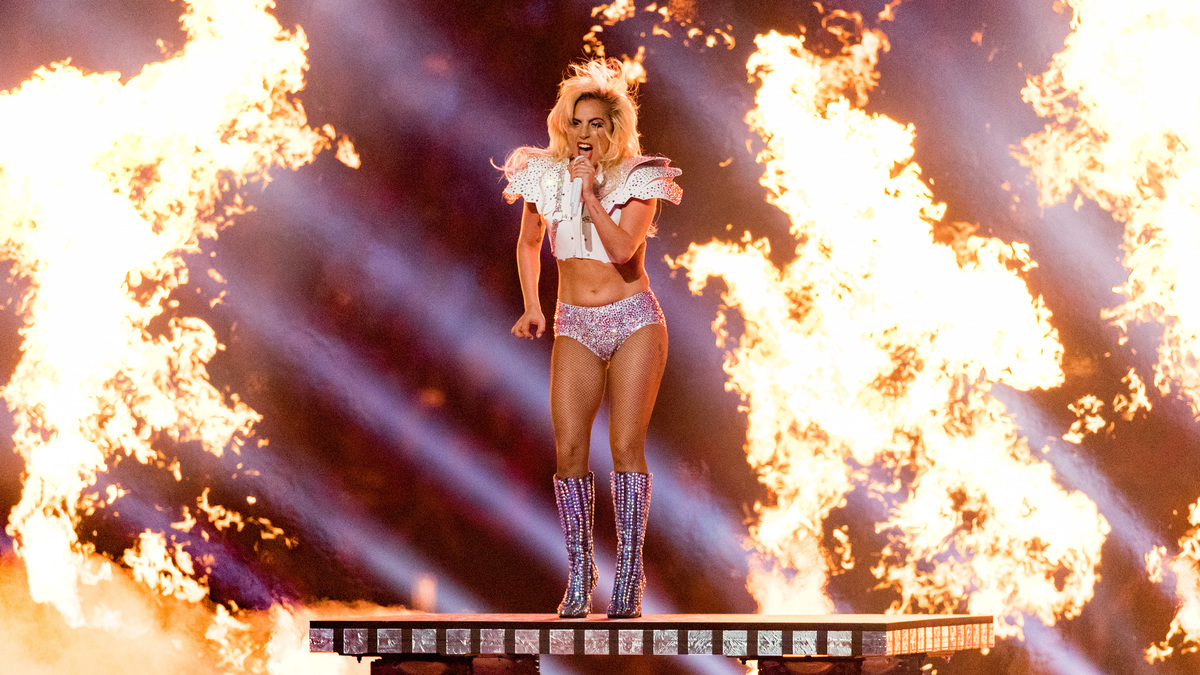 Lady Gaga during her performance at halftime of Super Bowl LI in Houston, Texas.

"Waiting 4 it," one Lady Gaga fan wrote on her Facebook wall before the Super Bowl halftime show last night. "Gaga, say some s***." The multiplatinum pop rabble-rouser's reputation as an advocate for LGBTQ rights, feminism and general freakery left her with a certain burden of proof as she took on America's biggest annual slice of family entertainment. Would she speak out about the need to preserve civil rights as a new administration already establishing a spotty record on that front reshapes the presidency?

When she took the stage, it seemed for a moment that she would. But roughly fifteen minutes later, after a brief rendition of two songs associated with patriotism, a medley of hits and a pyrotechnics-filled stage show that managed to make unexpected (though somehow deeply appropriate) connections between Rupaul's Drag Race and Top Gun, Lady Gaga left Super Bowl viewers to draw their own conclusions.

Gaga did not denounce President Trump's immigration ban, nor even urge him to stay the course on Obama's policies regarding LGBTQ federal workers. Instead, she dazzled with acrobatic dancing and a medley adhering to her generalized "passion for inclusion." She performed her queer anthem "Born This Way"; but she also debuted her new ad campaign for Tiffany, one of First Lady Melania Trump's favorite stores, and had her friend Tony Bennett, whose collaborative hand guided her beyond her core audience of out-there club kids, introduce her. Gaga's possibly progressive, definitely patriotic, ultimately open-ended statement left America with something new to debate: What can we expect from mainstream stars — whose modus operandi is uniting disparate audiences via the shared lexicon of the Top 40 — during an era typified by cultural divisions so deep they seem insurpassable? Should speaking in code be counted as political in an age when many are shouting their resistance in the streets?

Gaga's way of bridging gaps, expressed through her halftime show as it has been throughout her career, is to assume that the contradictions she contains within herself also exist among her listeners. As she explicitly says in the interview contained within her Tiffany advertisement, she believes in empowerment over rebellion; her entire vision relies on an optimistic belief that self-love and communal pride can defeat hate. Her most often cited lyric might be the line in "Born This Way" that celebrates "gay, straight or bi, lesbian, transgendered life." But it's important to remember that song's first line, which asserts that gay men and people who love God are morally equivalent: "It doesn't matter if you love him or capital H-I-M." Gaga's insistence that queer and religious folk can get along reflects her own identity. She's a practicing Catholic and a gender-nonconforming bisexual; an advocate for rape victims who's used the imagery of assault in her videos; an arena rock star who remains devoted to disco. She stands for both the glamorous and the marginalized and doesn't worry too much that the material wealth at the heart of what glamour represents may come at the expense of the excluded poor.

In her insistence on embracing contradictions, Gaga is hardly alone among pop icons, including previous Superbowl performers from Prince to Madonna to, yes, Beyoncé. These figures distill the cacophony of society's most anxious and meaningful arguments — about sex, religion, race and national identity — into choruses that help us live with ourselves and sometimes even make symbolic peace among strangers in their audience. (Madonna's career-making performance of "Like a Virgin" in a wedding dress is a prime historical example.) Gaga's can-do showbiz brio is her defining weapon. She believes, and makes us believe, that stage-generated stardust is a healing substance. "Don't be a drag, just be a queen," she instructed America Sunday, standing a stage that looked like a battleship. "Hi, Dad, hi Mom," she said, interrupting herself, reminding viewers that outside the show she's an ordinary American, and that ordinary Americans can be belly-baring liberationists in weird leotards. She wasn't out to shock, but to normalize.

That radical messages can be mixed up with highly conventional ones is also the point of the pair of songs Gaga used to launch her performance. She generated much talk by belting out a portion of Woody Guthrie's "This Land is Your Land," a ballad of small-d democracy that's been a grade school staple since not long after Guthrie wrote it in 1940. As John Shaw notes in his book on the two anthems, that song was actually a response to the other one Gaga excerpted, Irving Berlin's 1938 secular hymn "God Bless America," which Guthrie found excessively corny. Guthrie's song included some radical lines about social inequity, not sung by Gaga; did she mean to telegraph them, many pundits wondered? The fact is, few people knew those socialist-leaning verses until 1997, when an archival recording of Guthrie singing them was uncovered by a Smithsonian archivist. Though known to some on the American Left, the protest aspect of "This Land is Your Land" remained buried just under the surface of its earthy and beautiful celebration of the country as a landscape where people toil and travel. It is the quintessential coded message, a radical call disguised as a children's pageant favorite.

The same is true, in a way, for "God Bless America." Jody Rosen has called Berlin's lung-buster "an anthem for a changing world," one that comforted Americans at a time when totalitarian regimes threatened the Western world order. It is also a masterpiece from a Jewish composer known for crafting secular (or at least, interfaith) musical solutions to America's habitual slide into pseudo-generic Christian viewpoint; he also wrote "White Christmas," the original carol for those who don't want to focus on Jesus in the manger. Berlin's best-known songs fulfilled patriotic and religious imperatives without declaring patriotism or religiosity mandatory. Blending these two songs, and throwing in the line from the Pledge of Allegiance that insists on "liberty and justice for all," she provided an object lesson in how celebrities might speak between, and re-energize, familiar rhetorical lines.

Gaga's efforts, however, were only half-successful, partly because the mixed messages just kept coming. Were the drones that lit up the sky above the NRG Stadium pro-military, or a dystopic warning of warfare to come? Should we focus on the costume that looked like it was adorned with safety pins, a recently designated sign of alliance with LGBTQ causes, or the one that transformed macho football safety pads into a crop top? Was her choice to hug an apparently non-white fan in the crowd an anti-racist statement? The debates continue to rage, but the mainstream press, perhaps cautious about fake interpretations as well as fake news, opted to mostly declare her choices non-controversial. On social media, some declared the performance defiantly queer, but Marco Rubio and Ivanka Trump also praised it.

2017 is shaping up to be a watershed year for public protest, including many musical expressions of dissent. On the progressive side, the strongest of these messages are coming from within communities of resistance, as they always have. Voices lifted in the moment of protest, sometimes individual but often communal, resonate through history. They may belong to famous individuals, but it's not in the nature of the pop that Lady Gaga has made her métier to cultivate them.

To cite one overly invoked example, Bob Dylan singing "Only a Pawn in their Game" with Joan Baez at the 1963 March on Washington was era-defining for many who witnessed it; but the Freedom Singers standing next to him, activists who had often been arrested after singing their songs during Southern protests, provided the example he followed. Dylan simply made it accessible, through his charisma, his whiteness, his channeling voice. Pop stars do this: Almost always, they're not cultural leaders but distillers, making the mood of a historical moment legible to a larger audience. During the Obama era artists felt empowered by both that administration's high pop-cultural IQ and its embrace of post-hip-hop era music in particular; with MC's in the White House and Aretha Franklin acknowledged as a founding mother in multiple ways, stars felt safe exploring their own connections to the legacies of the civil rights movement and the counterculture. Beyoncé's much-vaunted courage in speaking out was at least partially enabled by the embrace of the Obamas. She fulfilled the promise laid before her by the status quo.

The mood has fundamentally shifted since Trump entered the Oval Office. He's expressed hostility toward Hollywood and the musical establishment, turning his apparent inability to secure top musical talent for the inauguration into a chance to decry the supposed elitism of monied culture-makers. In such an environment, popular artists tend to tone down their messages, make them vague and, as Gaga did, disguise them within the fireworks of spectacular performances. This was true in the 1950s, when McCarthyism threatened radicals in Hollywood; it was also true in the 1980s, when Ronald Reagan's rise was paralleled by the emergence of a yuppie culture that was aggressively superficial and pleasure-seeking. Dissent and aggressive responses to it will certainly thrive in coming times, but don't expect open expressions of it from the likes of Lady Gaga. It's more likely that the stars who even recently seemed like culture heroes to the left will become more like stealth agents, keeping fans guessing in ways that demand they refine their own stances and, ultimately, make their own clearer statements.