Accessibility links
Brantley Gilbert Doubles Down On Bro Country : The Record As many of country's male artists have moved in new directions, the rough-voiced, Georgia-born singer and songwriter offers a refined take on trucks, girls and back roads on his new album. 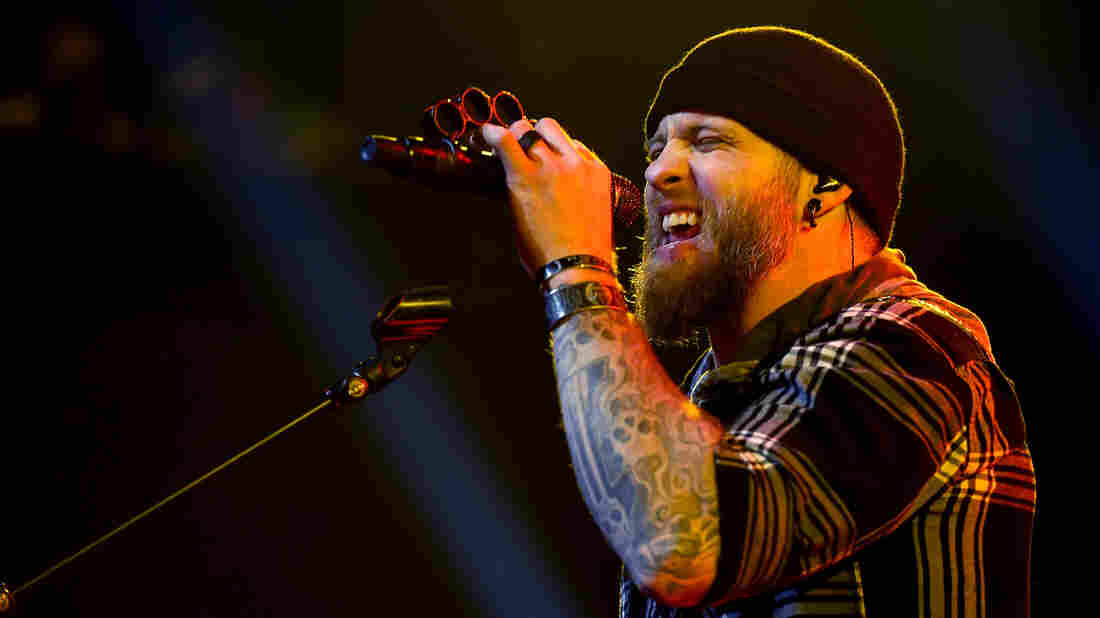 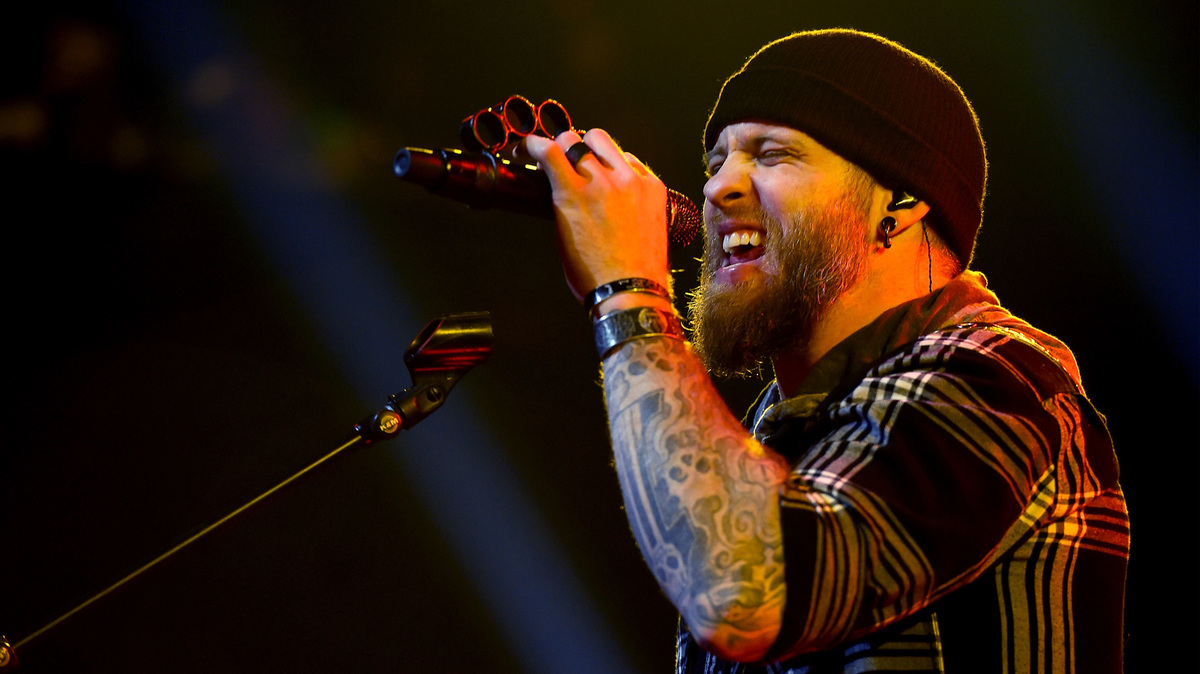 He hasn't traded in his truck. Brantley Gilbert performs at the release party for his latest album album, The Devil Don't Sleep.

Few contemporary country trends in recent memory attracted more dismissive responses than bro country did at its height. A few years back, the breezily macho delivery of backwoods come-ons over big, blunted guitar riffs and spindly programmed beats seemed like a reliable and easily replicable formula for hits. The perception was that those songs amounted to little more than crass capitalizing on hollow tropes, and over the last year and a half, a significant number of country's male acts — known quantities and newcomers alike — have steered away from bro sensibilities. The momentum in the format has shifted in increasingly diffuse directions — to falsetto-exploiting lovermen; sensitive types; boy band-style romancers; introspective brooders; rough-edged, self-aware rogues and temperate neotraditionalists.

In the midst of all this recalibrating, Brantley Gilbert, who's behind some of the brawniest country radio singles of the last half-decade, has declined to budge from the approach that helped propel him from the roster of Average Joes, a scrappy hick-hop label operating on the fringes of the country mainstream, to Valory, an imprint of industry powerhouse Big Machine, and then onto the charts. If anything, the 32-year-old, Georgia-born singer and songwriter digs in his heels on his fourth album, The Devil Don't Sleep, making clear that he's committed to not only inhabiting but thoroughly exploring a particular kind of bro-ish identity: the tough guy tentatively wading into introspective territory. It was evident all along that Gilbert would never be the country act crooning sweet, settled nothings alongside the Backstreet Boys. Instead, he projects the persona of the prickly-yet-repentant bad boy who leans on his swagger even as he exaggerates the labor of confessing his hidden sensitivity.

Even his version of a party jam, lead single "The Weekend," is of a different character than the bulk of those that populated radio playlists. When Gilbert goads listeners to cut loose, the invitation lacks the carefree attitude of his peers' once-ubiquitous party-starters. His stony, murmured delivery of the verses' low-slung, minor-key melody gives the song a menacing undertone. "We know ain't nobody scared now," he insists during the chorus, and it feels like he's staring down dangers (Drunken brawls? Trouble with the law?) that can come with unrestrained revelry.

The song's intro briefly isolates layers of the album's dense sound — a syncopated acoustic guitar figure, a thumping bass and hissing hi-hat pattern. Quickly, they're submerged beneath a squall of rock guitar whose flashy, muscular '80s-invoking attack is a specialty of Gilbert's producer Dann Huff. But the thing that really makes the song, and much of Gilbert's music, feel as pugnacious as it does is the way that he sings. He has a somewhat limited vocal instrument — neither supple nor naturally athletic — but he uses it to accentuate the extremes of his performing persona, channeling stubborn small town resilience through his clenched drawl, airing aggression through his strenuous, sandpapered rasp and hinting at pent-up ferocity with surly, monosyllabic spoken asides. His performances are instantly recognizable, often confrontational and pack a punch.

On the surface, Gilbert makes few concessions to the mellowing trend in male country expression. When he sings of a love interest riding shotgun in "You Could Be That Girl," he's imagining a risk-sharing companionship that bears a very faint resemblance Fetty Wap's "Trap Queen." "Well, I'm lookin' for a Bonnie," Gilbert announces, "lookin' for a P.I.C. — a little partner in crime; come hell or high water she's down, she's ridin' with me. Little miss watch-for-blue-lights, while I drive you can hold that .45. Go down in a blaze of glory; I always loved that story." By the second verse, he's escalated the qualifications for his ideal woman, visualizing a religious devoutness that would counterbalance her venturesome streak. An onerous combination of gendered expectations maybe, but notable for excluding more domesticated, middle-class standards of femininity.

The fantasizing works both ways; Gilbert spends many a track fixating on what a woman would want with a hoodlum like him. "My baby don't try to change me," he crows during a billowy power ballad, "'cause she knows this is the way that God made me. She gets every flaw, my rebel heart, every tattoo, every scar. She's in love with the outlaw in me."

Sometimes Gilbert depicts romance as a less secure negotiation. The intimate R&B-ish jam "In My Head" shows him in a reluctantly vulnerable mood. "You sleep so pretty up against me in this truck bed," he sings in a broody, softened groan. "Your little hand's inside of mine, and it's a perfect fit. And I'm in love with you all over me in every way. And I wouldn't be sayin' this if you were awake."

The relational ethic really gets interesting in "Bro Code"; there are more consequential negotiations going on in the song than the title suggests. Gilbert calls out a buddy for being inattentive to yet controlling of his girlfriend, warns the guy that she's bound to get her needs met elsewhere and emphasizes that he's doing the guy a solid, dragging out the word "bro" to convey needling, smart-assed familiarity.

Gilbert is acutely aware of what keeps his audience feeling connected to him — that his fans, branded the BG Nation, identify with his bellicose tone, his defiant posture, the contempt he aims at any hint of condescension, the slight suggestion of softness behind the sneer. "The ones that don't trust anybody trust me," he brags two tracks into the album. "Yeah, the ones that like me love me." The song ends with a blistering guitar solo and Gilbert muttering under his breath, "And if you don't, probably a pretty good chance I don't like you either." Because he has a strong hand in writing all of his material and plays up the personal conviction in his performances, it feels easy to locate him in the music. But in interviews he's given promoting The Devil Don't Sleep, he's seized every opportunity to make the point that certain songs, especially those in which he sounds like he's itching to get trashed, pick a fight or both, don't necessarily reflect his current sober, settled reality — that he's in fact drawing on his past to offer his fans a release valve in the present.

Gilbert may rely on shopworn imagery, but he deploys it with a visceral sense of investment. The devil's role in the title track isn't cartoonish caricature. Gilbert captures the paranoia of never being entirely safe from one's most depraved impulses, and sets a sinister tone with the intro. "Lord knows the devil don't sleep," he sings stealthily. "He never shuts his eyes; you never hear him creepin'." He lets the predatory image hang in the air for a second or two, then punctuates the warning with a knowing half-chuckle.

He treats redemption as an equally real possibility, closing the album with the piano ballad "Three Feet of Water," which is pretty much the closest his songwriting gets to the Baptist choruses of his youth. For nearly four minutes, he drops all traces of gruffness, singing conventional evangelical devotional language with earnestness and deference, marveling at the possibility of renewal symbolized by Christian baptism, voicing doubts before relinquishing them. It sounds as though he's singing to himself, shoring up his own confidence in his experiences of transformation, as much as he's singing to anyone else. But his notion of rebirth doesn't presume that an embrace of pious respectability will be part of the bargain. Saturday night and Sunday morning coexist in his realm, and the tension between the two pulls him deeper.