Accessibility links
The Grammys' Problem With Adele And Beyonce Is Not A Problem We Can Fix : The Record Adele's attempt to share her album of the year Grammy with Beyoncé on Sunday was a gesture that held within it a history of privilege and power that listeners and institutions alike reckon with. 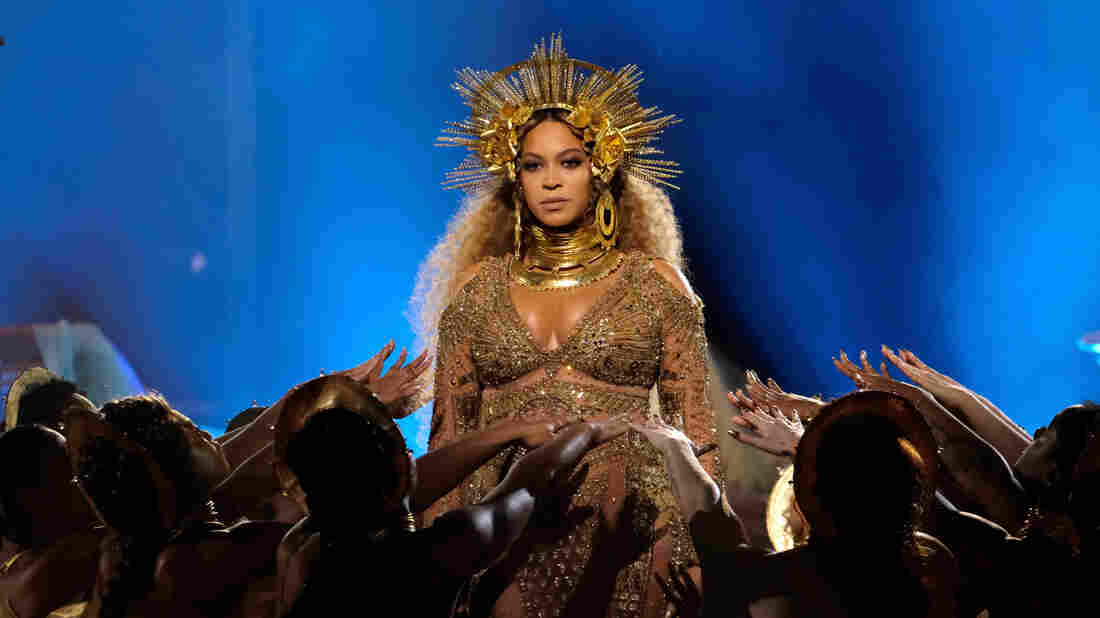 Beyoncé performs at the Grammy Awards on Sunday, February 12. She won the award for best urban contemporary album, but was shut out of the major categories, which were all given to Adele. Larry Busacca/Getty Images for NARAS hide caption 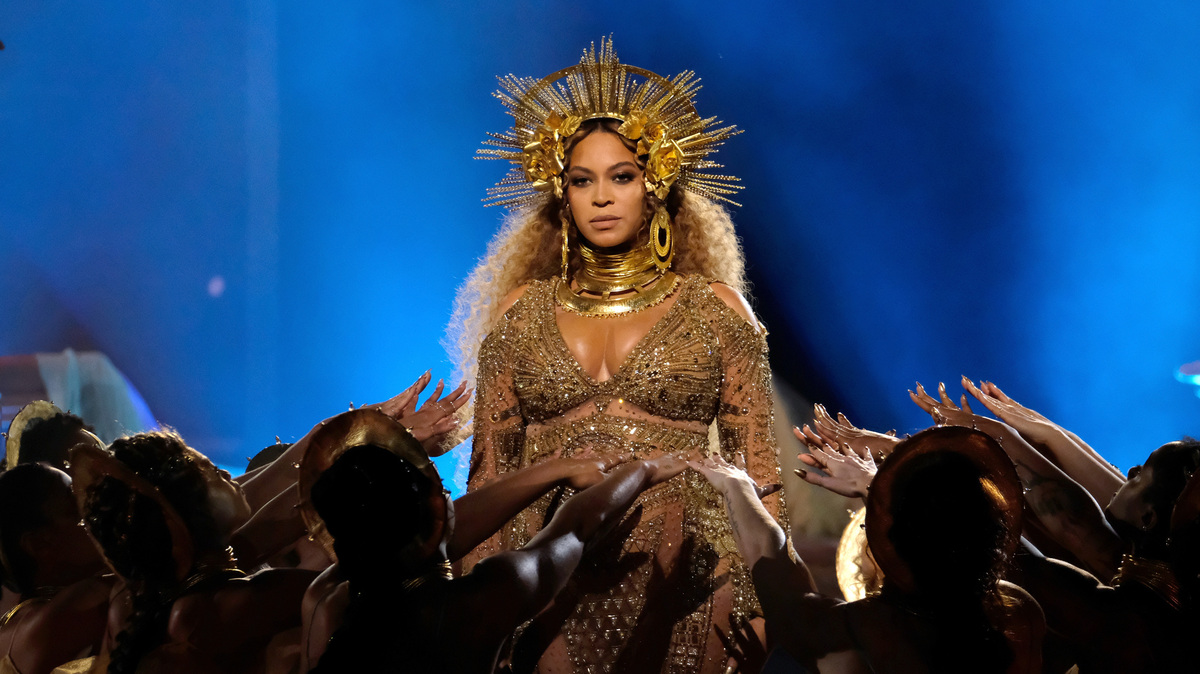 Beyoncé performs at the Grammy Awards on Sunday, February 12. She won the award for best urban contemporary album, but was shut out of the major categories, which were all given to Adele.

Adele broke her Grammy award in half Sunday night. It might have seemed like the careless act of someone with plenty to spare; the 28-year-old powerhouse vocalist has 15 of the music industry's most coveted statues, including the five just presented for her latest album, 25. She did so charmingly, with a characteristic big laugh, and apparently by accident, severing the statue's gramophone horn from its base as she nervously handled it. While explaining why she didn't deserve that particular award — why it should have gone to Beyoncé, her own professed idol and the most dominant figure in today's sometimes fraught, sometimes banal pop milieu, for her culture-shaking visual album Lemonade — Adele used the statue as a stress ball, inadvertently producing an apt metaphor for the predicament the win created for her, and the larger, enduring inequity it exposed.

It's interesting to think about what this gesture would have signified had another artist made it. What if Kanye West had rushed into the press conference, pulled the Grammy from Adele's hands, and smashed it? What if Chance the Rapper had torn asunder one of his three prizes in protest against Beyoncé's loss? Or if the Queen herself had, in her dignified and quiet way, gently tossed the pair she did win onto a tray full of empty wine glasses? Any of these gestures would have been read as deeply political, possibly immature and certainly insurrectionist. This is where privilege gets complicated: Adele could become slightly unhinged about her arguably dubious win because, as a lovable representative of the white, mainstream pop ideal the Grammys have helped shape, her protest doesn't feel that disruptive.

Are the Grammys racist? Not in the sickening mode of swastikas spraypainted on walls, or even in the separate-lunchtable practices common in the mid-twentieth century, when rock and soul kickstarted a new, integrationist era to which the pre-rock pop-grounded Recording Academy, who doles them out, is still adjusting. Achieving the ideal of equality is proving as heartbreakingly difficult for the recording industry as it is for all of America.

Here are some facts, laid out by music scholar John Vilanova when Taylor Swift won the 2016 album of the year in a field that included the widely praised rapper Kendrick Lamar. "In the last ten years, there have been seventeen nonwhite artists nominated for the Grammy Award for album of the year," Vilanova wrote. "Of those seventeen, the only winner was Herbie Hancock in 2008. His album was a collection of covers of songs by the white folk artist Joni Mitchell." Vilanova goes on to explain that the categories beyond the top four, which reflect genre and radio format distinctions, are racially marked. Lemonade, for example, won best urban contemporary album. She's only won once in a major category, in 2009, for "Single Ladies." Nearly all of her other 20 gramophones are in the R&B category.

"Many well-meaning people often have a hard time understanding what systemic racism looks like," Vilanova writes. "This is what systemic racism looks like." When artists of color only win awards that are not included in the telecast — the only artist other than Beyoncé to get behind the podium on Sunday was Chance the Rapper — that's systemic racism, buried so deeply within the structures of an institution that it can be read as inevitable. Throughout popular music, it also takes the form of pervasive ideas. These include the notion that music made with "real" instruments and sung straightforwardly, like Adele's softly tinged soul or Sturgill Simpson's raucous country, require more skill and vision than those created within the synth- and sample-driven vernacular of hip-hop; the assumption that artists who stand still and sing, like Adele, are more "authentic" than those who dance, like Beyoncé, although dance and music have been inseparable at least since the Jazz Age; and the elevation of the self-contained singer-songwriter, a figure who's almost always white, over those who work more collaboratively.

These ideas obscure the fact that most white performers who embody them borrow heavily from black musical traditions. At the Grammys, the most memorable "breakthrough" performances came from Nashville artists Simpson and Maren Morris, who both openly demonstrated their debts to gospel and soul. Adele herself is a blue-eyed soul singer who began her education listening to Destiny's Child, Beyoncé's former group, at age 11. "My life is Beyoncé," she said while accepting her honors, at one point asking the very pregnant star if she would be her "mummy." That odd and frankly somewhat inappropriate gush (for one thing, Beyoncé is only eight years older than Adele) may have been inspired by Beyoncé's own extravagant living tableau of a Grammy performance, which conjured African goddesses, her sister Solange and Cher in celebrating the divine side of motherhood. Yet the comment also inadvertently conjured a long and problematic history of black women being asked to serve as "mothers" to white women — as domestics, as often unacknowledged mentors, and as uncredited artistic sources. Beyoncé demurely smiled in the audience, surrounded by her actual family, whom she'd cited in her own speech as the reason she made Lemonade — so that these black children would have images and words that reflected themselves, and not through a whitened mirror. "Often, we become inaudible," she'd said of the "deep Southern culture" Lemonade expressed. Sadly, her loss at least momentarily rendered her inaudible again.

But what could Adele have said? At one point it seemed that she would just give the award to Beyoncé, who demurred without responding. Moments later, Adele further protested, saying, "The way you make me and my friends feel — the way that you make my black friends feel — is empowering." Again, her sincere comment unfortunately came with some heavy baggage. The stereotype of the "black friend," like that of the benevolent black mother figure, runs throughout American popular culture as an inadequate balm used to soothe the realities of racism – good feeling among individual white and black characters is often presented in films, for examples, as a provisional solution to systematic oppression. Because viewers don't know Adele's black friends — the collaborators she brought onstage after her win were all white men, except for one, the producer Austen Jux-Chandler — the comment pinged off the stereotype. Yet some observers reacting on social media suggested that this was the only way the singer could have rightly expressed admiration for a work explicitly designed to speak to women of color. "Bey made that for US. She [Adele] knows that," wrote the author Luvvie Ajayi on Twitter.

Adele was, in fact, caught in the horns of a predicament that many white Beyoncé fans responding to Lemonade have faced since it came to dominate the conversation around pop last year. How is a white listener supposed to appreciate this work, which like all great pop, springs from particular sources but resonates across boundaries and borders? One remarkable thing about Beyoncé's work now is its simultaneous position at the very center of the cultural conversation and within a community reasonably demanding its own separate, self-regulated space.

The synchronicity between her fully realizing her own voice and vision and the emergence of a new era of civil rights activism and black pride, crystallized within #BlackLivesMatter and given voice on Black Twitter, has allowed Beyoncé to join the ranks of very few popular-cultural icons — Muhammad Ali and Aretha Franklin are two examples — who "belong" to both the wider culture where systemic racism persists and the communities in resistance against it. Many white fans, including many fellow artists, have identified with Beyoncé over the course of her nearly twenty-year career. They are moved by Lemonade. They may even feel it speaks to them. But they recognize that this woman's work also asks for their silence, their willingness to pause and step back in a way that leaves room for others to respond and celebrate it. "Listen and amplify" is a credo for white participants in intersectional social activism, but time and time again we stumble, because privilege, the dialectical cause and result of oppression, sneaks into every side comment, every helpful suggestion, every unfettered response. Listening is difficult. Ask any child; it's a skill that takes years to learn.

Here's the hard part when it comes to popular music. Pop is fun — it helps people relax and temporarily abandon their inhibitions, to express hidden parts of themselves and to open themselves up to others, including others fundamentally different from themselves. The music industry relies on the fantasy that pop is welcoming to all — to anyone who's willing to buy a record (now a download or a streaming service subscription) or a concert ticket. Yet this is, in fact, a dream that's often contradicted by reality — by the separate tracks that once banished artists of color to the "race records" division at record labels, and which persist in less explicit ways today; by the policies that have restricted the access of artists of color to certain venues, because their audiences are allegedly dangerous or disruptive; by the unspoken prejudices that elevate white artists working within black styles to star status while their inspirations remain ghettoized. Artists of color asserting themselves take the fun dream apart. They must. Otherwise the sickness persists because it's inconvenient and frightening to acknowledge the symptoms.

For white people, to acknowledge institutional racism is to recognize our place in it and to become prepared to move from that comfortable spot. Yet the little voice of assumed exceptionalism often convinces us that we can stay there and fight the good fight.

Feeling exceptional is a privilege in itself. So is imagining the exceptionalism of your idols. Adele makes people happy because she is both an ordinary woman and a genius, borne by her own talent into the stratosphere. We need to believe this can happen to anyone but will only happen to the magical and unexpected few. Exceptionalism contradicts systematic truths and seems to solve the most deeply embedded social problems. And we all crave it. Everyone who benefits from these structures wants to believe they are natural. We want both Beyoncé and Adele to be exceptional — not yet another woman of color in a long line of them who has to present herself as nearly supernatural simply to be acknowledged as a supremely talented person, or another very gifted white woman, also in a long line, whose marketability is enhanced by her race. Her most avid fans might dream that Beyoncé could break free of this system altogether, creating some kind of new zone where she is no longer burdened by this legacy, but they and she too also want her to win, to prove the system wrong by actually succeeding within it.

Adele, holding her broken trophy in her manicured hands, tried to acknowledge this, which took courage but was ultimately impossible. The language available to her within the pop world the Grammys support — the same one that leads Beyoncé to deify herself, wrestling with these questions, too — isn't adequate to express what needs to be expressed. So she cried. She laughed. And she left it to all of us to consider ways to dismantle it.