Accessibility links
Misadventures In Tuning In: Considering The Limits Of Music, LSD And Science : The Record The poet August Kleinzahler considers some recent studies on LSD's effect on music listening and remains ... unconvinced.

Misadventures In Tuning In: Considering The Limits Of Music, LSD And Science

Misadventures In Tuning In: Considering The Limits Of Music, LSD And Science 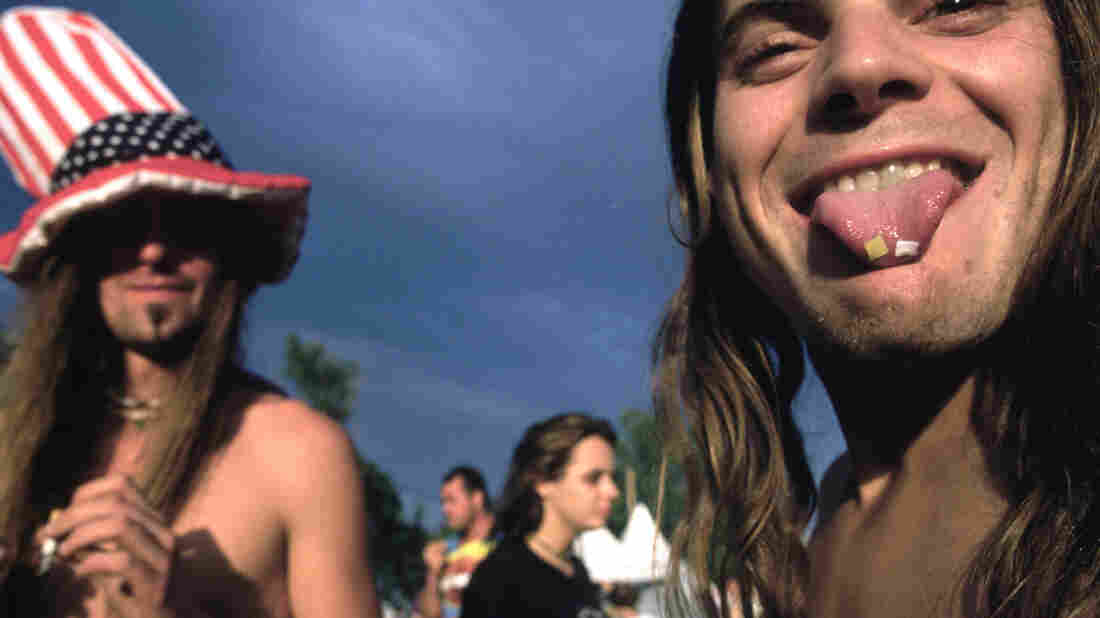 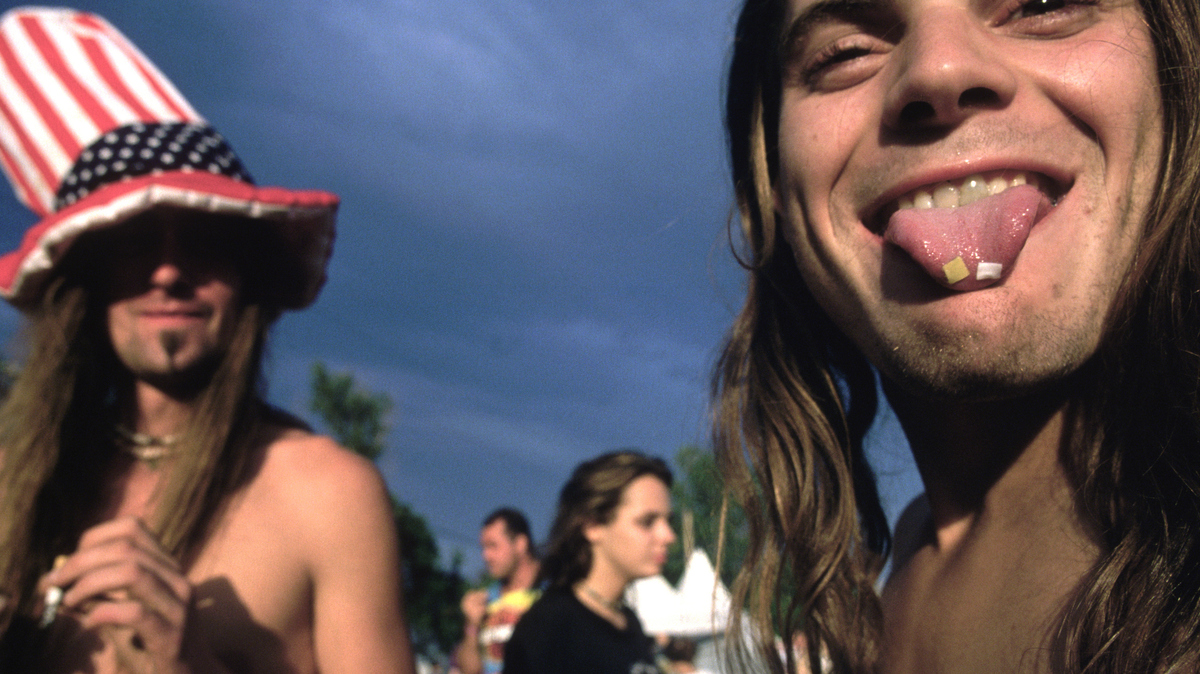 The 'meaning' of music is an amorphous concept, as are the lessons of psychotropic experiences brought on by substances like lysergic acid diethylamide, or LSD. Recent scientific studies have attempted to tackle both of these topics and gauge whether ingesting the substance impacted peoples' experiences with and interpretations of music. By request, the poet August Kleinzahler considers two recent studies, through the lens of his own musical and psychedelic dabblings.

The music was almost uniformly dreadful. I recall snapping upright in revulsion from a blanketed embrace with a lovely friend in a grassy field somewhere in the middle of Wisconsin, in the late spring of 1969, a "rock festival," my consciousness psychotropically enhanced, exclaiming: "Good grief, what is that crap?" [Ed note: Mr. Kleinzahler is, understandably, mistaken. The festival took place in 1970.] It turns out I was experiencing for the first time the "improvisational genius" of the now-legendary garage band from Hell, the final word in musical self-indulgence: The Grateful Dead, floating chords and noodling around to no good result for what seemed like an eternity.

The Dead weren't alone: Blue Cheer, Moby Grape, the Strawberry Alarm Clock, Vanilla Fudge, The Zombies — one could go on ... so one shall — The Electric Prunes, the Moody Blues, The 13 Floor Elevator, Soft Machine, Spirit, Iron Butterfly, Pearls Before Swine, Kaleidoscope ...

There was, clearly, a yawning need for soundtracks in the service of zonkification. The more self-indulgent, particularly when it came to guitar solos, the better. After all, the generation listening to this music was the most self-indulgent, self-important generation in American history, bar none. Which is not to say the music was all bad, most of it harmlessly falling under the rubric of "bad music kids like" from a particular era. Listening afresh to some of the "pop rock" music of that time years later, there's much to be said for songs by The Beach Boys, Jimi Hendrix, The Velvet Underground, Cream, the Mothers of Invention and perhaps a few others that slip my mind. The Beatles and Rolling Stones remain a delight. And, of course, Dylan. But they are of a different order. Even on LSD, being in the same room at the same time The Doors or The Jefferson Airplane were playing invariably sent me hurrying out the exit long before intermission. The volume and crudity of playing was willfully assaultive, the lyrics insufferably pretentious and melodramatic, in a childishly metaphysical or dime-store surrealist vein. Have I neglected to mention Pink Floyd? Yes, and for good reason.

LSD, psilocybin and mescaline — when one wasn't convulsed with retching under the influence of the latter these catatonics were rarely, in my memory, conducive to "musical appreciation." The experience, at least as regards the internal, solid-state lash-up of neural receptors and synaptic firing and the rest, was too jagged and disruptive. There's too much of this turning into that – which, yes, has its charms — but music on LSD, I would aver, serves merely as the catalyst or point of departure for episodes of hallucination, synesthesia, what-have-you. Most sonic effects — distortion, reverb, tape loops, panning, synthesizer and weird instrumentation, the theremin, et al. — that we associate with "psychedelic music" seem, in retrospect, chintzy embellishment, overlay, distraction. The best and most successful instances of these chemically inspired sonic accretions appear on The Beatles' albums, which were beautifully and imaginatively produced and remain to this day pleasantly lodged in my musical memory. Those recordings' additions succeeded largely because they were woven successfully, dare one say artfully, into the musical compositions. They weren't simply tacked-on flotsam. Were they "trippy"? I don't know about that, but they certainly signaled what the drug of choice the musicians were grooving to at the time.

Marijuana (at least, the less potent Mexican variety of 50 years back) is, on the other hand, most conducive indeed to musical appreciation. In fact, it is conducive to sensory appreciation of all kinds: music, sex, food ... or all three, should one find oneself in the bath with company. But insofar as it affects our responsiveness to music, weed seems most effectively coupled with certain kinds of music, not all, and does best, I find, with jazz. Not so much with, say, classical.

These "uncontrolled experiments" of mine between 1967 and 1972 have no scientific basis in fact. Conveniently, this brings me to the original impetus for this entire reflective exercise – two recent scientific studies of the effects of LSD on the appreciation of music.

First, bear in mind that when scientists approach the subject of LSD it is usually in connection with psychosis or psychiatric disorders. Similarly, when scientists address the realm of "art," both low (pop music) and high (classical music, literature or painting), they are a bit lost, particularly as regards the latter; the neural architecture of artists, apart from the hypertrophy of one brain hemisphere and the excitation of certain neural pathways, remains largely mysterious, even with the technology of magnetic resonance imaging at hand. No two cases are really alike. Fugitive attempts by scientists to connect the brain patterns one finds in "crazy" people, and those under the influence of LSD, to the brain activity one encounters in "creative artists" — imagine if William Blake were wired-up while composing "Tyger, tyger, burning bright... " (good luck... he daid!) — are unreliable and speculative at best.

And so we have, from January of 2017, "The Fabric of Meaning and Subjective Effects in LSD-Induced States Depend on Serotonin 2A Receptor Activation." Don't rush out and try to track this study down. In brief it "determined," with the help of magnetic resonance imaging, that "study participants attached greater meaning to previously irrelevant stimuli [i.e. listening to 30 different pieces of music sequentially] after taking LSD. Duh. "C'mon, baby, light my fire ..."

In another, from Feburary 2015, "LSD enhances the emotional response to music," a group of screened volunteers — after being submitted to the Beck Depression Inventory and the 60-item Neuroticism-Extraversion Openness Five-Factor Inventory personality scale — were administered 1000 micrograms of LSD freebase (um, yikes) at Hammersmith Hospital in London. I can hardly imagine a more depressing site .... Might they not have found a glassed-in orangerie in a large and verdurous English estate's garden?

No: "All experiments took place in a clinical room, consisting of a hospital bed, physiological monitoring equipment and en-suite facilities. Since some psychedelics have the potential to induce psychological distress, the clinical condition of the room was adapted to promote feelings of comfort and safety, i.e. the lights were dimmed and the room was decorated with soft furnishings." (Give me my cinder-block dorm room with a paisley wall-hanging any ol' day ...)

And what was the music they chose to be enhanced by LSD? Brace yourself (or don't): Stars of the Lid, Greg Haines, Olafur Arnalds, Arve Henriksen, Brian McBride. The kind of ambient soporifica that would paralyze a rabid wolverine, the sort of ethereal kapok one encounters in Napa County, here in California, at the Wappo Hot Springs; somatic therapy, balneotherapy, hydrotherapy, volcanic ash, spring water, peat moss, regenerate your ch'i ...

The conclusion? "LSD elicits profound changes in consciousness with a remarkable potential." "Remarkable potential?" Transforming something like the beating heart of an embryo in amniotic fluid, sampled, into a crude visual analogue of Guarino Guarini's design for the dome of the nave in Turin's Baroque S. Lorenzo Chapel? The mind races, well beyond the confines of the en suite facilities of a hospital room at Hammersmith Hospital in West, London. You're a long way from Kansas, Dorothy ...