Accessibility links
Bittersweet Little Rock And Roller: Chuck Berry And The Teenage Girls In The Audience : The Record Chuck Berry's life story includes serious mistreatment of women, but fully reckoning with his legacy means also acknowledging the women and girls who made his groundbreaking rock and roll possible. 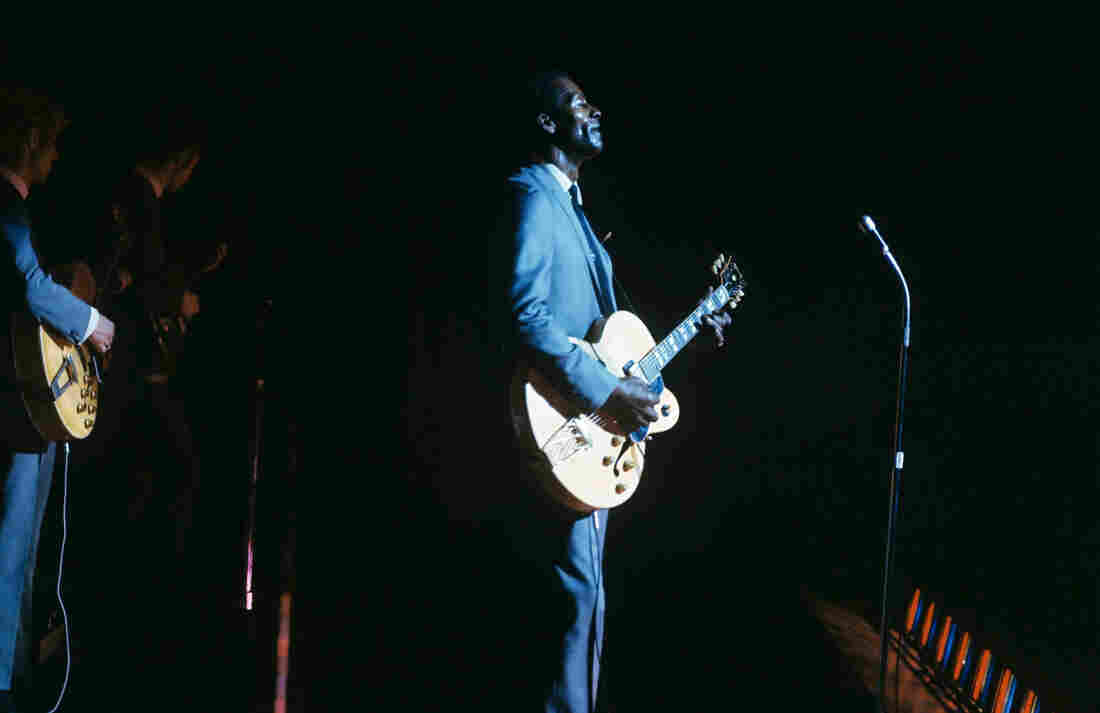 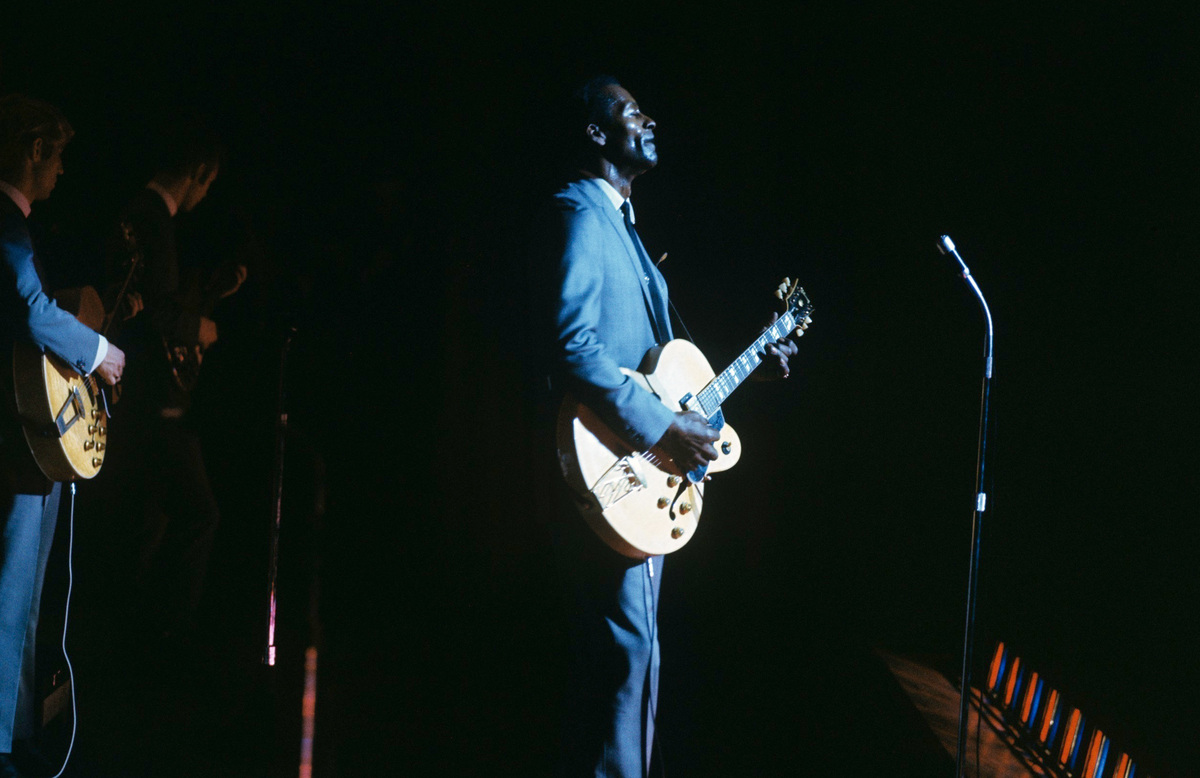 When Chuck Berry died last week, the music-loving world rose to acknowledge his status as, in Bob Dylan's words, the Shakespeare of rock and roll. The man was 90; people were ready. Jon Pareles, chief pop critic of The New York Times, and David Remnick, editor at The New Yorker, both immediately published lengthy obituaries. Musicians ranging from Bruce Springsteen to Questlove to Keith Richards of The Rolling Stones – Berry's famous protégé – rushed to pay tribute. Robert Christgau's 1976 essay declaring Berry "the greatest of the rock and rollers" recirculated on social media, as did Carl Sagan and his Cosmos co-creator Ann Druyan's 1986 letter informing Berry that a recording of "Johnny B. Goode" had been transported into space on the Voyager spacecraft. A particularly eloquent remembrance by Minneapolis City Pages editor Keith Harris declared Berry "inventor of the rock lyric, interpreter of teenage dreams."

Notably absent from this flood of panegyrics were the voices of women. In fact, the stroll through cyberspace that's now part of the mourning rituals for lost celebrities reveals that throughout his long career, women rarely wrote about Berry at all. (Notable exceptions include Lillian Roxon's entry in her Rock Encyclopedia, which declared Berry the "single most important name in the history of rock" seven years before Christgau did; and a few contemporary writers, including Annie Zaleski and Shana L. Redmond, whose analysis of the erotics of Berry's "My Ding-a-Ling" is essential.) Nor have many women musicians — Patti Smith stands out as one — declared themselves Berry acolytes. The universal language Berry did so much to establish, of cars and girls and teen freedom and American dreaming, apparently doesn't resonate that profoundly with many women.

One reason this may be true is obvious. Berry's life story includes several incidences of serious mistreatment of women. He was convicted in 1962, under the Mann Act, of transporting a minor across state lines. The story of Berry and Janice Escalanti (often misspelled Escalante) is murky, and the young woman herself disappeared not long after Berry's trial. His imprisonment, which derailed his recording career, is held up as an example of a racist double standard at a time when many rockers dated teenage queens. But there were other grievances. He was also arrested for assaulting a woman in New York in 1987, though only convicted of harassment. And in the incident most often cited as his lowest, he was accused in 1990 of videotaping women using the bathrooms of his St. Louis restaurant. Berry's biographer Bruce Pegg, who documented these "naughties" (to use the musician's own self-deluding term) in the most detailed way possible, has said that Berry was as controlling and aggressive as he could be witty and warm.

Biographies like Berry's have led to a spirited debate about whether art can be appreciated separate from the sins of the artist. The most probing pieces by women published after Berry's death focus on this issue. Rock and roll aficionado Caryn Rose wrote of her lifetime of wrestling with Berry's legacy of intertwined brilliance and sexism. Australian music scholars Catherine Strong and Emma Rush used the occasion to argue for acknowledgment of such wrongdoings alongside appreciation of their work. "As the founding figures of rock and roll die, it is time to foreground their wrongdoings as well as their accomplishments," they wrote. To some, such interventions seem inappropriate right after a death; for most women, they are an absolutely necessary part of rewriting rock's past and future in ways that make real space for them.

That space can't be made simply by calling out individual misdeeds. The very way in which Chuck Berry's legacy is being celebrated, while wonderful and necessary and right in many ways, still does a disservice not only to him as an artist, but the women who did play a key part in the rock and roll culture he — and many others, male and female, queer and straight, and of all races — invented.

Virtually every Berry appreciation published focuses on a patrilineal transmission from him to the white rockers of the British Invasion, specifically The Beatles and The Rolling Stones. Remnick's begins with a discussion of the "anxiety of influence" Keith Richards feels about the man whose every guitar lick he stole. Many others cited how Richards and Mick Jagger met on a train because one was carrying a Berry album and the other noticed. The Guardian published ten songs inspired by Berry, all of them by male artists ranging from The Beatles to Motorhead.

These stories are crucial. They reclaim rock and roll for African-Americans, specifically one African-American who well knew that racism kept him from the superstardom enjoyed by those who learned at his duck-walking knee. Yet they are also limiting, pushing to the side other sources, including female ones. Berry's inimitable lyrics, as the historian Allen Lowe has noted, were partly inspired by the bawdy and erudite blues of female titans like Bessie Smith. He also loved the gender-integrated country music songbook. If more women were writing about Berry, perhaps there'd be more rhapsodic writing about songs like "Memphis, Tennessee," a country weeper that considers the toll soured romance takes on families in the same poignant way that Kitty Wells did starting in 1952.

But it's a third female figure that most powerfully complicates the man-to-boys story that has Berry and his British Invasion offspring inventing rock and roll: the teenage girl in the audience. She's one that the songwriter endlessly credited as a rock and roll inventor, in songs abounding in nuance and genuine respect. As a man, Berry clearly had a problem keeping his hands off of such girls. As an artist, he acknowledged their central importance and agency in ways few of his peers could match.

"Sweet Little Sixteen," "Oh! Carol," "Nadine," "Tulane," "You Never Can Tell," — these songs and many other Berry classics portray girls as charismatic tastemakers who move through the world under their own power, leaving a new culture in their wake. In "Sweet Little Rock and Roller" the girl is 9, a magical being whose cheers for her favorite artists sets off an avalanche of "five thousand tongues screaming 'more and more'!" Discomfort is a common reaction in recent years to Berry's celebrations of these "Little Queenies"; why was a man in his thirties training his handsome eye on these innocents? But there was a cultural reason. The teenage world Berry made musical was a female-dominated one in many ways, and he understood that.

The postwar consumer culture of the teenager revolved around music, fashion, dating and other leisure pursuits, and boys looked to girls for guidance. (Though virginity was still valued, girls often started dating as young as 12 and were considered "late bloomers" if they weren't experienced with boys by the end of high school.) Young female music fans became bold in their pursuit of rock and rollers, both as modest sexual conquests — getting a kiss from a touring musician was a coup valued by many — and as beneficiaries of their support. Girls ran the fan clubs, bought the records and the magazines, filled the concert halls. Boys lagged behind, advised by dating manuals to let their girlfriends teach them how to dance.

Chuck Berry's insight into these realities inspired him to write songs in which girls were almost always in charge. "I'm going to learn to dance if it takes me all night and day," he assures his crush Carol, begging her to not trade him in for a more skilled rival. In "Sweet Little Sixteen," a song about how girls are responsible for the success of male stars, "[H]e plopped teengirl fandom smack dab at the center of the universe where it belonged and where it's remained ever since, despite decades of effort by dumb boys and boring men to dislodge it," Keith Harris writes. Berry followed this thread in his writing as teen culture became the counterculture, writing "Tulane" about an industrious young female head shop owner (and her hapless boyfriend) in the 1970s. Joan Jett, one woman rocker who's embraced Berry's style, covered that song in 1989.

Teenage girls appreciated Berry's music not only because it acknowledged them but because its other themes also reflected the challenges they faced. Encouraged by the culture to be sexual and then condemned if they actually went all the way, placed in charge of a new world of fun and shopping and play but hindered if they tried to pursue careers or truly steer their own lives, teenage girls in the 1950s experienced freedom in confinement. So did African-American entertainers like Berry, who made money but were also ripped off by the white men who ran most of the music industry, who could travel across the country in fancy cars but couldn't eat in many restaurants and were continually harassed by police and who knew that their days at the top may be numbered – few of these innovators were able to sustain careers into a second decade, unlike their white counterparts like Elvis Presley or even Jerry Lee Lewis, who came back from his own moral exile to enjoy country success in the late 1960s. Like those girls who faced a future of housewifery, Chuck Berry was acutely aware that the clock on his fame was always ticking. He wrote about it in songs like "Reelin' and Rockin," expressing the limits of the giddy freedom rock and roll sold to teenagers, something his female fans could translate into their own experience.

Chuck Berry was not a feminist, an advocate for women artists or, on significant occasions, even a person who treated his female intimates decently. That doesn't mean his music didn't speak to women, or that the world he helped create wasn't also partly created by them. As we remember his legacy, instead of focusing so intently on the boys' club rock and roll became, we should remember the women who stood at its door, took the tickets, wrote the informal accounts in their fan letters, told the DJs what to play. Those women whom Chuck Berry the artist considered gold. His legacy is all the richer if we recognize their presence and the complexity it suggests.

An earlier version of this article included a reversed image of Chuck Berry playing guitar. The photo was provided by Getty Images.