Accessibility links
Chuck Berry Taught Me How To Be An American : The Record For the author, the child of an immigrant, the discovery of Berry's songs — two decades after they were recorded — decoded the meaning of American youth culture. 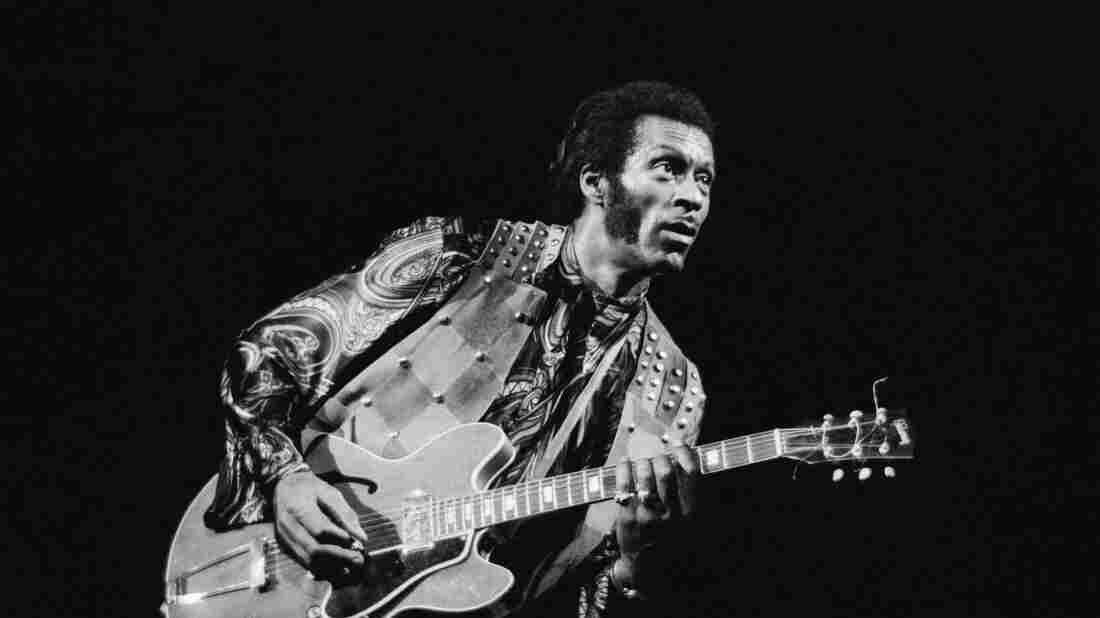 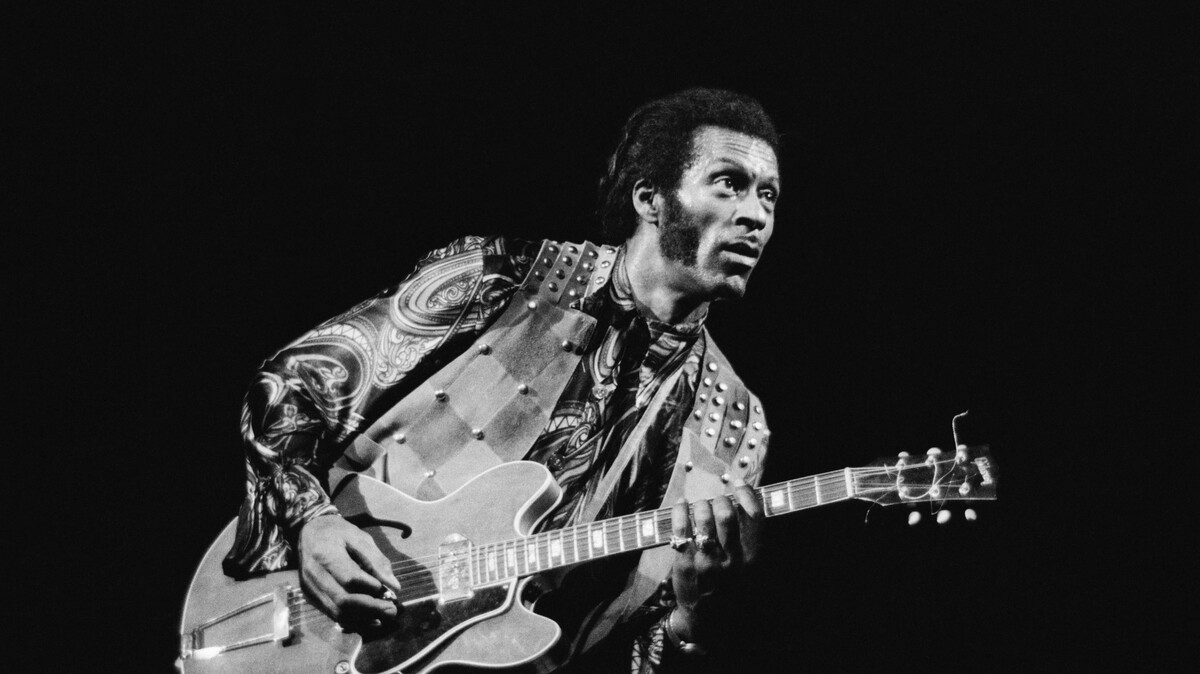 I was an immigrant's kid growing up in the 1970s in the suburbs of Buffalo, New York. From an early age I learned that because I carried this weird name and my family ate, dressed and worshipped differently than most of my neighbors, being fluent in American popular culture connected me with others — especially the neighborhood boys who often ignored and sometimes threatened me. So I devoured everything I could find about baseball and watched an unhealthy amount of television.

But music frustrated me. I had little access to the major currents of American popular music until I was almost into my teens.

My folks were not big on recorded music. My father, a scientist, had come from India and never expressed interest in music of any kind. My American-born mother played a few guitar chords and sang some folk songs. Neither listened to the radio in the car or home. I only knew the performers who appeared on television: Glen Campbell; Sonny and Cher; the Jackson Five and the cast and guests of Hee Haw.

One day in 1975, when I was 9 years old, my father brought home one of those plastic, all-in-one Emerson stereo systems. It had a turntable, an eight-track player (as was the style at the time) and AM/FM capability. It sat in the living room on a table that we had brought back from India, so the table's carved rosewood elephants held the stereo system up. I took an instant interest in it, spreading out my baseball cards on the carpet in front of it as I explored FM radio stations.

When my father purchased the stereo he also grabbed a pile of a dozen or so LPs from the discount rack at Kmart. Almost every record was terrible: overblown early-'70s psychedelic or progressive rock from unknown bands on tertiary labels; folk tinged with Celtic influence and forgettable lyrics; what looked like some cheap re-issues or re-packages of older artists. I remember an unbearable album called Keyboard Tales by a musician named Michael Perlitch that begins with a 14-minute song called "Captain Zanzibar." Most of these albums got played once. But two of them impressed me. Starved of just about anything else, I played them incessantly for years until they were worn and scratched.

The first was a Johnny Cash album called Big River. I had watched The Johnny Cash Show on TV, so I knew he was a big deal. It had songs like "Country Boy" and "Home of the Blues." I loved that record. Every song told a clear story and his voice was mesmerizing.

The other was an odd collection of Chuck Berry songs. Berry's likeness appeared nowhere on the album. On the front cover sat a blond woman, cigarette draping from in her mouth, naked except for a well-placed, oversized, studded leather jacket. The back cover was a black-and-white drawing of an indistinguishable man facing away. It most definitely was not Berry. So I had no idea who Chuck Berry was or that he was born on the banks of the "Big River" about which Johnny Cash sang. But the first cut on the album changed everything for me.

It was "Sweet Little Rock and Roller." Unlike all that early-1970s muddy folk and prog-rock, that 1958 song made sense to me. It was tight. It was clear. It conjured emotions and made my feet move. It invited me listen to the elements that made up the song. The best adjective I can find to describe the experience is "immediate." It sounded like Chuck Berry was in the living room with me and those wooden elephants, right at that moment.

"Check Me Out," "Ramblin' Rose," "Carol" and "Oh, Baby Doll" filled out that bootleg album. These were songs about dances, cars and girls. Even at that young age I felt the draw, the urgency, to learn and experience those central themes of American male youth. "Ramblin' Rose" swung with horns. "It Hurts Me, Too" was the first pure blues song I ever knew, felt, or memorized.

These songs became crucial to me, but I had no idea that they were canonical to the world. For a little, suburban, Indian kid like me, with no older siblings, there was no way to learn about the context of these songs or the importance of Chuck Berry. I knew nothing of his interpretations of traditional blues or his invention of rock guitar. And since none of my friends had heard of him, I assumed Berry was obscure — his songs meaningful only for me. For all I knew, "C. C. Rider" was as marginal as "Captain Zanzibar."

When I was about 10 I read a profile of The Rolling Stones in Dynamite magazine. By then I had heard every cut on Hot Rocks, the Stones' first greatest hits collection. My uncle had it and I copied it onto a blank eight-track (as was the style at the time). I can't say that I recognized much Chuck Berry in the Stones. At first listen cuts like "Mother's Little Helper" and "Sympathy for the Devil" seemed to live on an island.

But that Dynamite profile of the Stones opened with a scene of young Mick Jagger and Keith Richards running into each other in London, Mick holding a freshly purchased copy of "Roll Over Beethoven." They bonded over it and decided to form a band.

Only then did I realize Chuck Berry was not my personal, geeky infatuation. He was the source of a revolution. I started hearing his echoes as I dug deeper into The Beatles, Stones, The Beach Boys (no kidding), Jimi Hendrix, The Band and The Who.

By my high school years I was fully aware that Chuck Berry was a rock saint, if not a god. Even as I dove into The Ramones and The Clash, Berry remained the purest rocker. Though I worshipped The Jam, Berry — with his two-tone shoes — was the more dapper than the mods. In 1982 I saved up some money to purchase a copy of The Great 28, which was the most comprehensive collection of his studio singles. Muddy Waters and Howlin' Wolf collections soon followed. But Berry connected it all and remained at the center. His music grew even more personal to me as I actually learned to drive a car and pursued romantic attention from actual, living girls. All through high school I hoped that I might soon grow into a "Brown Eyed Handsome Man."

"Back in the U.S.A." became my anthem when my family would spend months at a time in India, where I grew terribly homesick and craved a hamburger. I got chills when I saw Simon and Garfunkel cover "Maybellene" in their 1982 HBO-televised concert in Central Park. "Roll Over Beethoven" became the bridge between Berry and The Beatles, whom I'd already dug since I was about 7 after I had seen Help! on television.

Once that all came together for me, I started to think about influences and histories. Discerning interconnected patterns among expressions, technologies and social forces became the defining theme of my life's work. I first worked those chops by thinking about Chuck Berry.

As I thought back about my old LP on Sunday, the day I learned Berry had passed away, I assumed it was some bootleg European import. I had never come across it in any of my adult dives into Berry collections. And it does not show up among the major discographies of Berry's work.

It turns out that both the Berry album and the Cash album – which also fails to appear in the major Cash discographies – were released in the early 1970s by a label called Pickwick Records. Pickwick was notorious for re-recording major hits with sound-alike artists and for repackaging albums from old singles that no longer generated sales. Because almost no 1950s and 1960s recording artists owned the rights to their recordings, Pickwick was able to clear the rights cheaply and the artists themselves did not have a say over the presentation or production. And for cover songs, American copyright provides a "compulsory license" preventing the songwriter from declining to have her or his song recorded by others but guaranteeing royalties. Pickwick was a bottom-feeder in the American music industry. But its enterprising ways and low prices placed these two artists into my life. And for that I will be forever grateful.

I have always counted myself lucky that I discovered Chuck Berry before I found The Rolling Stones. It was an accident, of course – the product of the Kmart discount bin and a loving father who knew his son wanted some American music but hadn't a clue what to buy. Chuck Berry gave me a sense that I had a personal soundtrack. And later, through him I had a more personal connection to a much larger world.

Chuck Berry was an American. He declared his Americanness loudly and fought to assert his standing as a citizen and a man, even though too many others would deny that of him. If I could feel what he sang about, I could be an American, too. When I was a lonely, insecure teen, that meant much to me. Today, when some violence or ugliness reminds me that my family is not always welcomed by all in America, it still means a lot today.

Chuck Berry lighted my path to cultural citizenship. After living half a century and traveling the world, seeing my country lift my hopes by letting my family thrive and then shake me with its hatred and xenophobia, I can still say, "I'm so glad I'm living in the U.S.A."

Siva Vaidhyanathan is the Robertson Professor of Media Studies and Director of the Center for Media and Citizenship at the University of Virginia. His latest book is Intellectual Property: A Very Short Introduction (Oxford University Press, 2017). He is writing a book about how Facebook affects our lives and politics.