Accessibility links
Kishori Amonkar, Leading Indian Classical Vocalist, Dies At Age 84 : The Record A musicians' musician who shunned the spotlight, Amonkar was a revered singer in the Hindustani (North Indian) tradition. According to Indian press reports, she died today after a brief illness. 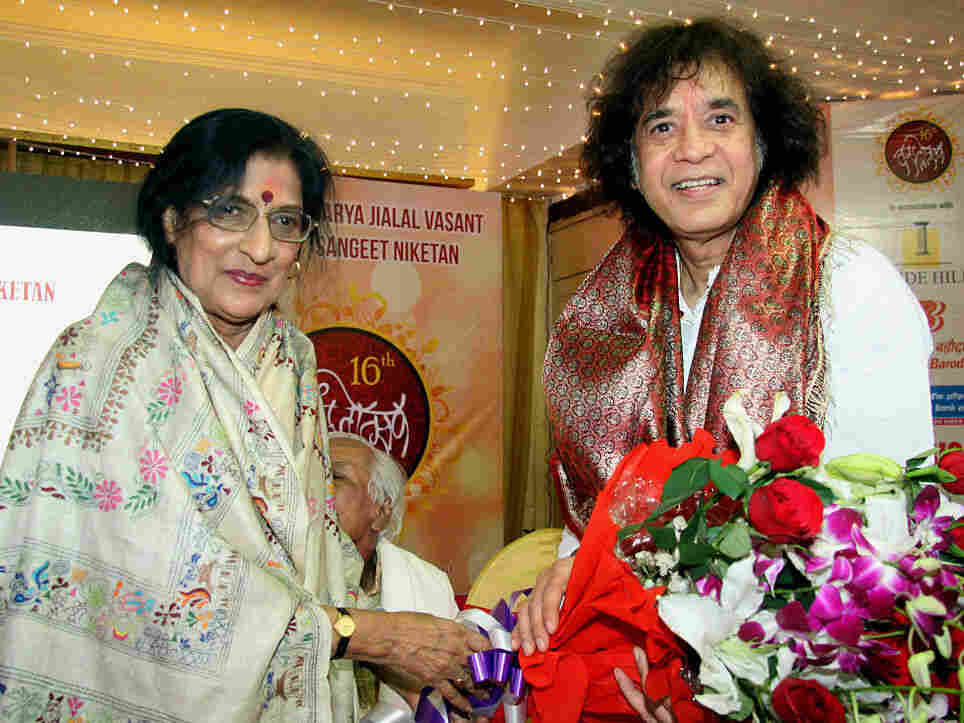 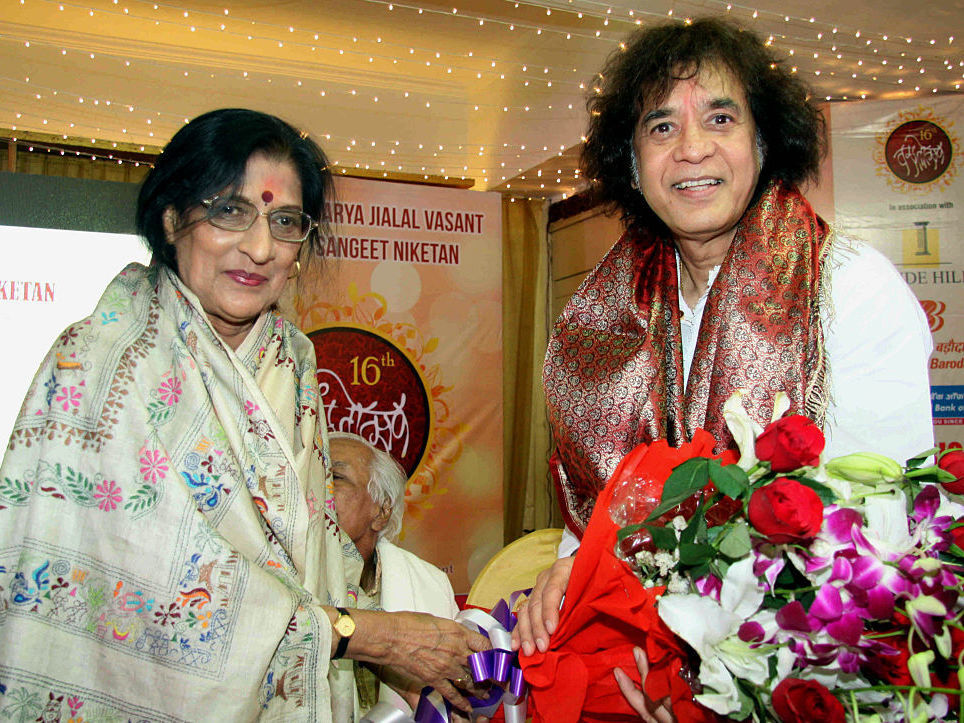 The Indian vocalist Kishori Amonkar and tabla player Zakir Hussain posing at an awards ceremony in Mumbai, India in February 2016. Amonkar died on April 3, 2017 at age 84.

One of India's foremost classical singers, Kishori Amonkar, has died; she was one of the primary representatives of the Hindustani (North Indian) vocal tradition. The Times of India reported Amonkar died today at home in Mumbai after a brief illness, at age 84.

Kishori Amonkar was a musicians' musician. In a 2011 documentary about the singer, Bhinna Shadja (a film commissioned by India's Ministry of External Affairs), the internationally renowned tabla virtuoso Zakir Hussain placed her among the greatest Hindustani vocalists of all time, saying of her music: "It's a painting that embodies every detail of someone's life. In that, there is great happiness, great sadness, great anger, great frustration, desperation. Everything comes into focus in this one, concentrated little piece." Using her nickname, "Tai," Hussain continued: "That journey you can take in the world of art with so few. Kishoritai is one of those people."

Along with her brilliant and deeply emotional improvisations in the khyal classical song style, in performances of single ragas that could last well over an hour, Amonkar — who usually sang cradling a small swaramandal zither to accompany herself — was particularly noted for her work in two other, more compact song genres: the "semi-classical" thumri style, and in bhajans, a kind of Hindu religious devotional song. In the recording below, Amonkar interprets a Meera bhajan, a song in honor of the god Krishna attributed to the 16th-century mystic and poet Meera (also known as Mira, Meerabai or Mirabai).

Born April 10, 1932, Amonkar trained with her mother, singer Mogubai Kurdikar, in the Jaipur Atrauli gharana (school, or tradition) founded by the 19th-century artist Ustad [Master] Alladiya Khan. In an interview with The Indian Express originally published in December, Amonkar recalled her mother as a stern taskmaster: "She would sing and I would repeat," she said. "I would copy her without asking her anything. Aai [Mother] was so strict that she would sing the sthayi [refrain] and antara [stanza] only twice and not a third time. I had to get every contour of the piece in those two instances. That taught me concentration." Later, she would accompany her mother onstage, playing the stringed tanpura drone as her mother sang.

After her professional career began to develop in her early twenties, Amonkar reportedly lost her voice totally. She said that she found no cure in Western-style doctors or physical therapy. Instead, she credited the return of her abilities — a process that took two years — to a holy person who aided her with Ayurveda. According to Amonkar, that two-year break from singing helped her find her own voice — and her own approach into the tradition. She finally felt free enough to locate her own connection to the music she was singing, rather than simply mimic what she had been taught.

Amonkar received two of the Indian government's highest civilian awards: the third-highest, the Padma Bushan, in 1987 and the second-highest, the Padma Vibhushan, in 2002. Even so, she was less of a celebrity figure than some of her contemporaries, rarely performing internationally and loathe to give interviews.

She was also famously prone to chastising audiences and presenters for what she perceived as less-than-perfect attention to her performances. Amonkar attributed that acerbity to her need to service the music. "I want to get involved and focus on the abstract ... For that I need my audiences's help, not their interruptions," she told The Indian Express. "People have to understand that music isn't entertainment. It is not to be sung to attract the audience, which is why I never play to the gallery."