Accessibility links
Maximum Hops Yield Maximum Results: Making Beer With Sunn O))) : The Record Scott Walker and Sunn O)))'s collaborative record Soused, a dark and wild leap into the metallic abyss, has inspired a collaborative beer by the same name. What does that beer taste like? 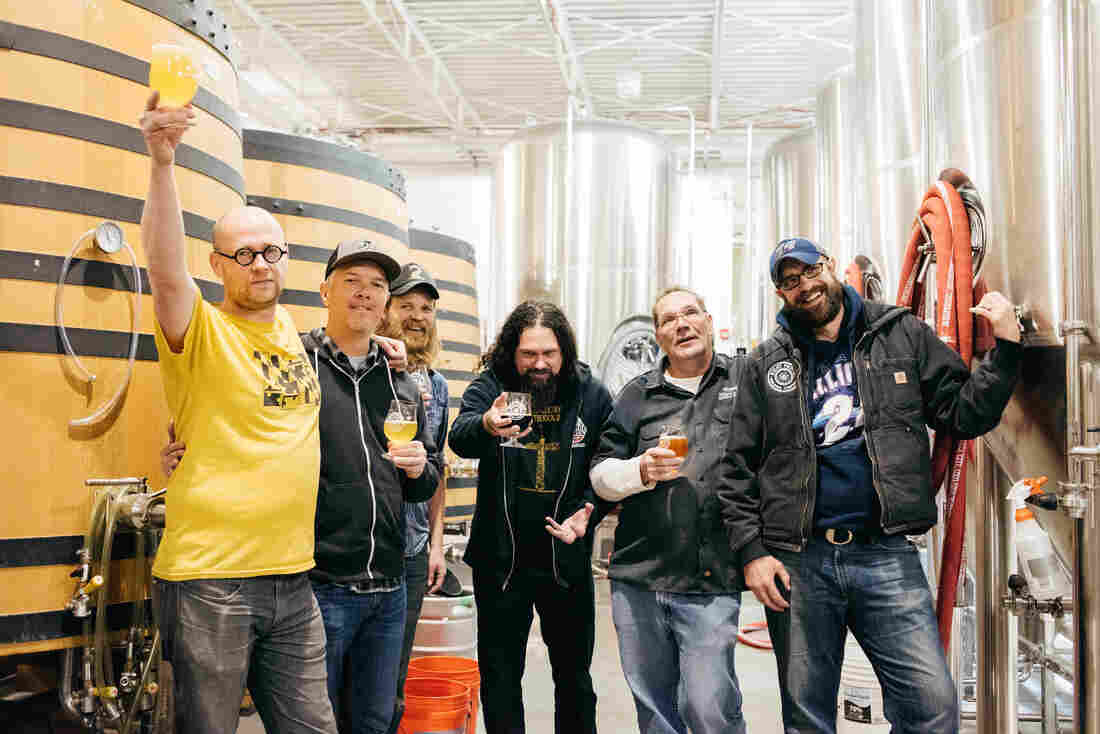 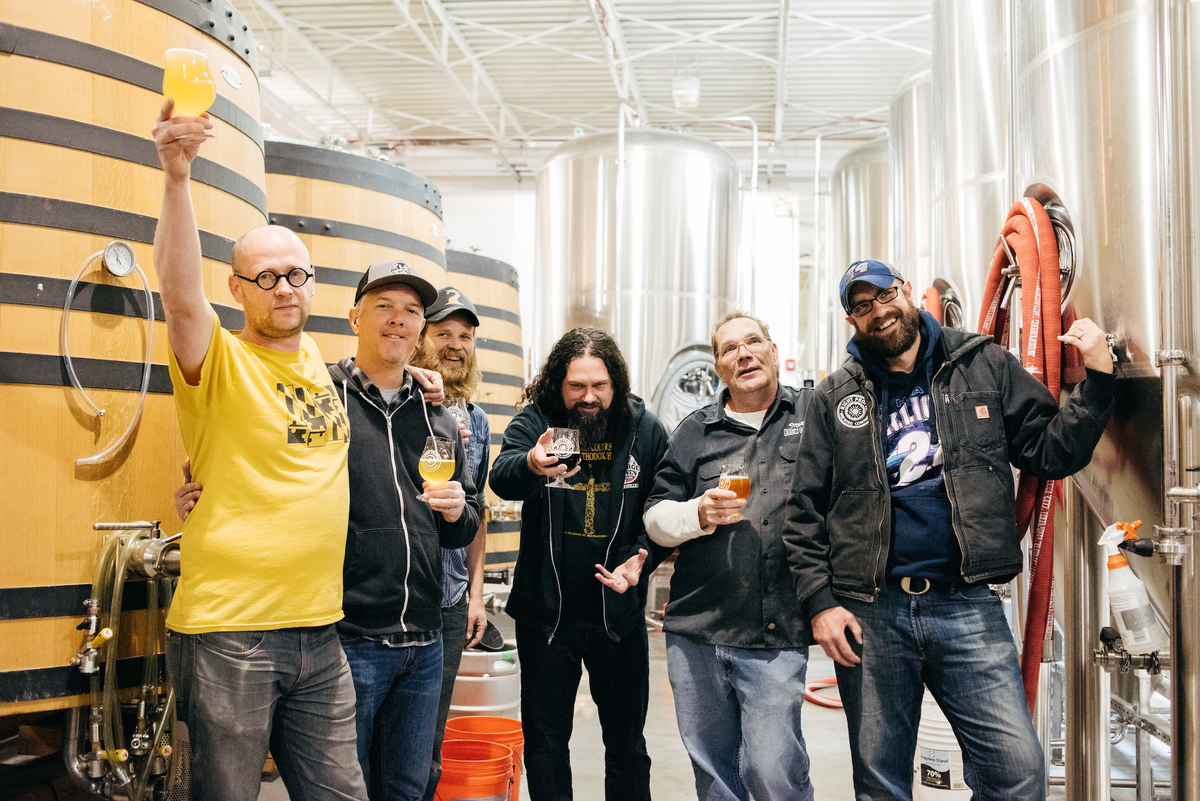 The D.C. brewery Right Proper was like a cultural mullet during a recent visit: a posh baby shower in the front (complete with chocolate petit fours), a bunch of metal heads making beer in the back. Right Proper's head brewer, Nathan Zeender, was dumping a heaping spoonful of hop extract into a tank.

"It's the most bitter, intense stuff you'll ever try in your life," he told me. "It'll blow your mind. You won't have any taste buds left." It was thick and waxy, like pomade, colored a dirt-pollen yellow and smelling like a barrel of fermented oranges packed into a tin can. Zeender assured me that it's good for a "clean bitterness."

Zeender was stirring this viscous goo into a kettle of what would become "Soused," a collaboration beer between three breweries — Right Proper, Stone and Pen Druid — inspired by a bewildering album from 2014 and a friendship, separate from that album, struck up many years ago.

That record was a collaboration between the abstract drone-metal band Sunn O))) and '60s-pop-icon-turned-avant-composer Scott Walker. The pair released the deafeningly sublime album Soused, a dark and wild leap into the abyss that was also pretty ridiculous, using American bullwhips as percussion and plunging Walker's harrowing croon into unknown depths.

"We made a record called Monoliths And Dimensions and after that record we really didn't know what we were going to do next," Sunn O))) member Greg Anderson said. "For us, creatively, it was our peak. We didn't know where to go next, but we made the record with Scott [Walker]. It was basically an impetus for us to keep moving and keep playing rather than be worried about topping the last thing we had done."

So what does that taste like... in beer form?

"A Nordic-style beer made sense to me," Zeender said of Soused, which will be ready in time for the Craft Brewers Conference taking place in Washington, D.C., April 10-13. Their intent was to evoke the mystery of Sunn O))) by using a traditional Nordic yeast that was historically passed down from one log to another. (No, really.) "These guys have a Boreal ambience to me — slow and kind of austere sometimes."

It's Time To Party: Summer Songs

"There's a strong Nordic connection with Sunn O))) as well," chimed Greg Anderson, as we huddled outside on a bright, cold mid-March day. To wit: Anderson used to be in a band called Thorr's Hammer, his daughter's name is Thora, Sunn O)))'s frequent vocal contributor Attila Csihar sings for the Norwegian black-metal band Mayhem. Anderson was pleased about the connection. "Nordic yeast! Incredible."

While that Nordic yeast is at the heart of Soused, there's also fifteen pounds of locally-sourced juniper branches, steeped in a hot liquor tank overnight, brewing an herbal tea in which they'll brew the beer. All three breweries share malts and hops from their stocks — but especially hops.

"How many pounds per barrel is a pretty good indicator of how hoppy a beer is going to be," Zeender says. "For our brewery, two pounds is a lot." When they asked Anderson how many pounds of hops per barrels to use, he growled: "Three."

"If it's really bad, it's Greg's fault," Zeender says, laughing. (In the end, they ended up using five pounds per barrel.) 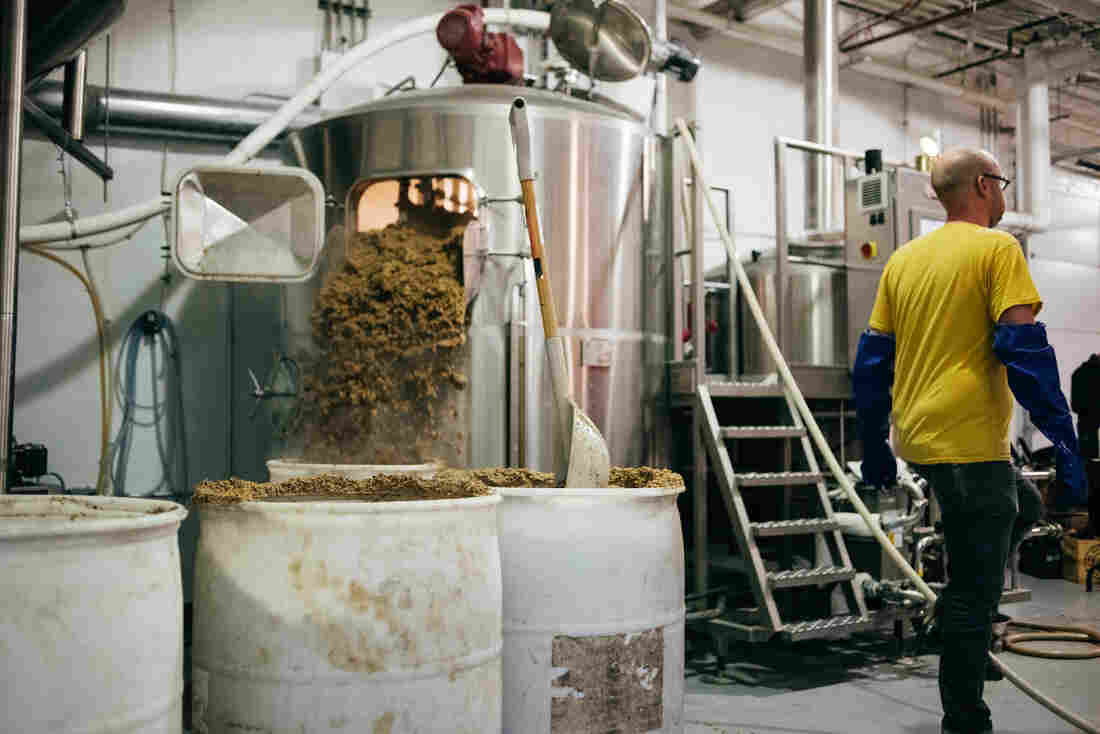 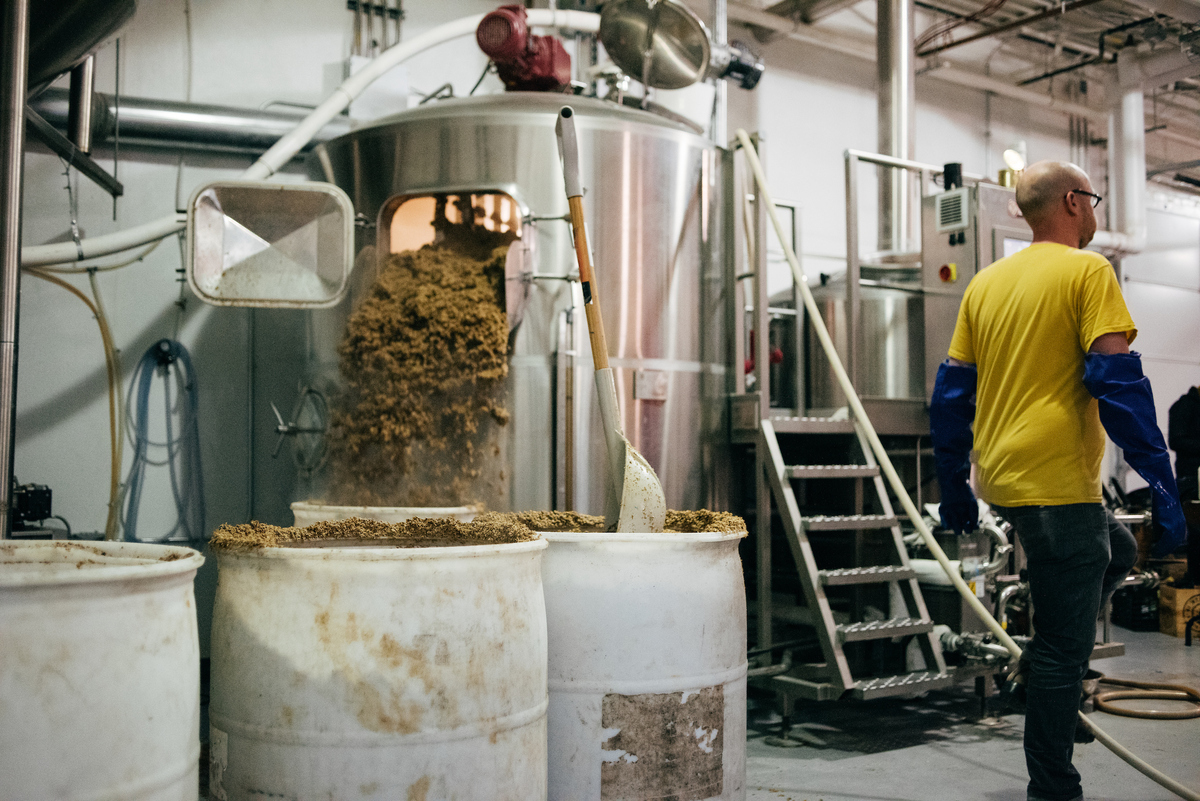 That grain is spent! Nathan Zeender empties the mash tun at Right Proper.

All these dudes got together for the same reasons most music and beer nerds do — to hang out and talk about music and beer. In a rare alignment of the amp stacks — namely, Sunn O)))'s performance at the 9:30 Club — Anderson and all of the brewers were all going to in the same place and time. But the IPA's deeper genesis can be traced back to a friendship made in the days when you had to trade tapes to hear the latest and gnarliest punk and metal.

"Greg and I met through this magazine called Maximum Rocknroll," says Mike Harbin. "We were both in punk rock bands. He kindly let me trade a False Liberty seven-inch for an old demo by my terrible band, which I will not name."

Harbin and Anderson kept in touch over the years, introducing each other to new craft beers and new bands. One moved up in the ranks at various breweries before landing at Stone, the other started the influential record label Southern Lord (and can, from the stage, vibrate your whole body and being in a feedback-induced cleanse). 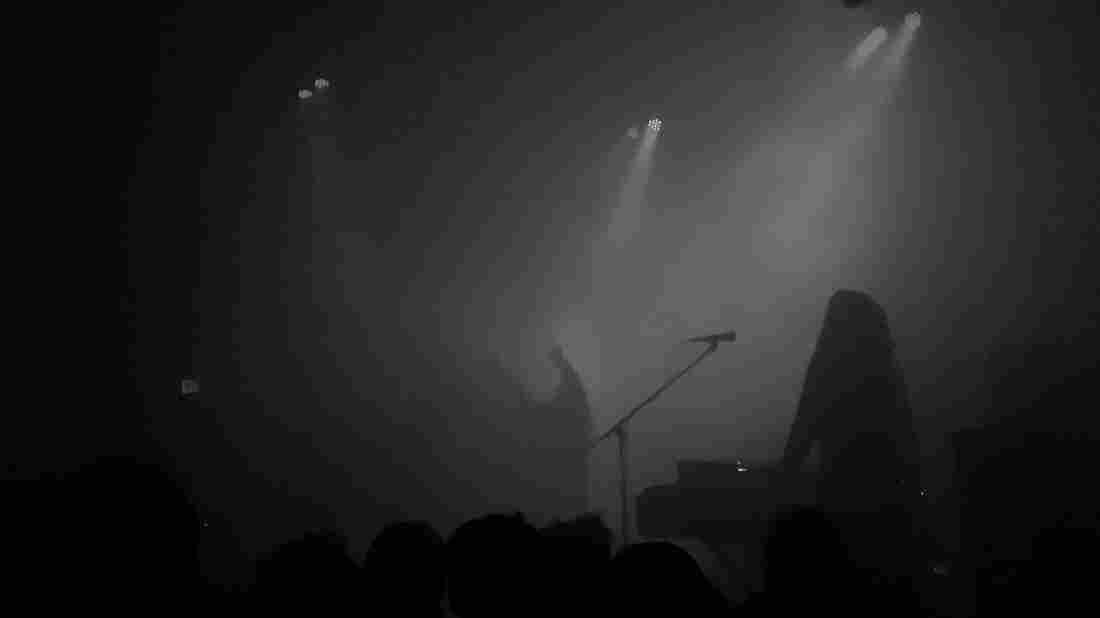 On a sunny afternoon, Greg Anderson helped make some beer. That night, he donned a robe and fogged up the 9:30 Club in Washington, D.C. with Sunn O))). Lars Gotrich/NPR hide caption 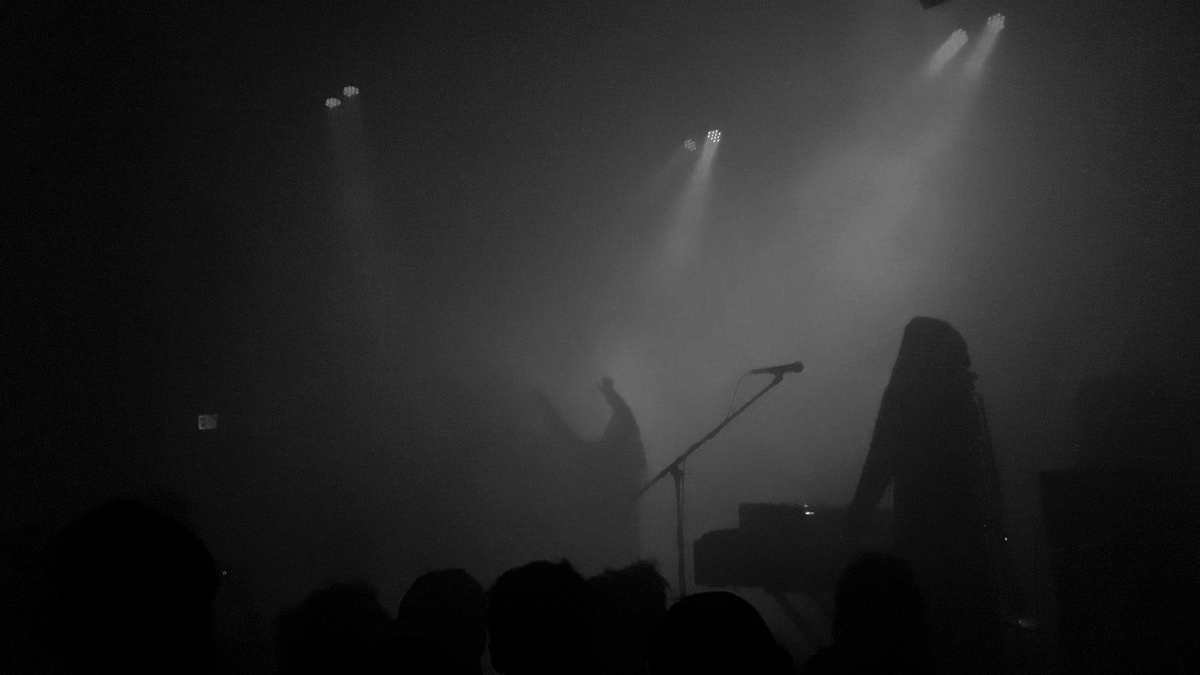 On a sunny afternoon, Greg Anderson helped make some beer. That night, he donned a robe and fogged up the 9:30 Club in Washington, D.C. with Sunn O))).

Beer and music are lifelong mates, especially in the headbanging, hard-drinking throngs of metal. Right Proper often brews music-inspired beers (the Teeth Of Lions Rule The Divine wheat ale named for one of Greg Anderson and Stephen O'Malley's previous bands, The Bees Made Honey In The Lion's Skull farmhouse ale, after Earth's 2008 album), as does Stone (the Thunderstruck double IPA, which shares a title with a certain AC/DC anthem). Pen Druid is run by members of the heavy psych-rock band Pontiak. "We can go between rehearsing in the morning, which is what we did yesterday morning, and then go to the brewery," says singer/guitarist Van Carney. "It's the same brain space."

Besides getting brew-tal together, beer and music also share a healthy sense of collaboration. "We've got three different breweries represented here, at three different levels of how we do things," says Jim Sipp, Stone's brewing manager. "And they're all making beer just like musicians all together making music." They take pieces from each other to make something different, and learn from that experience. 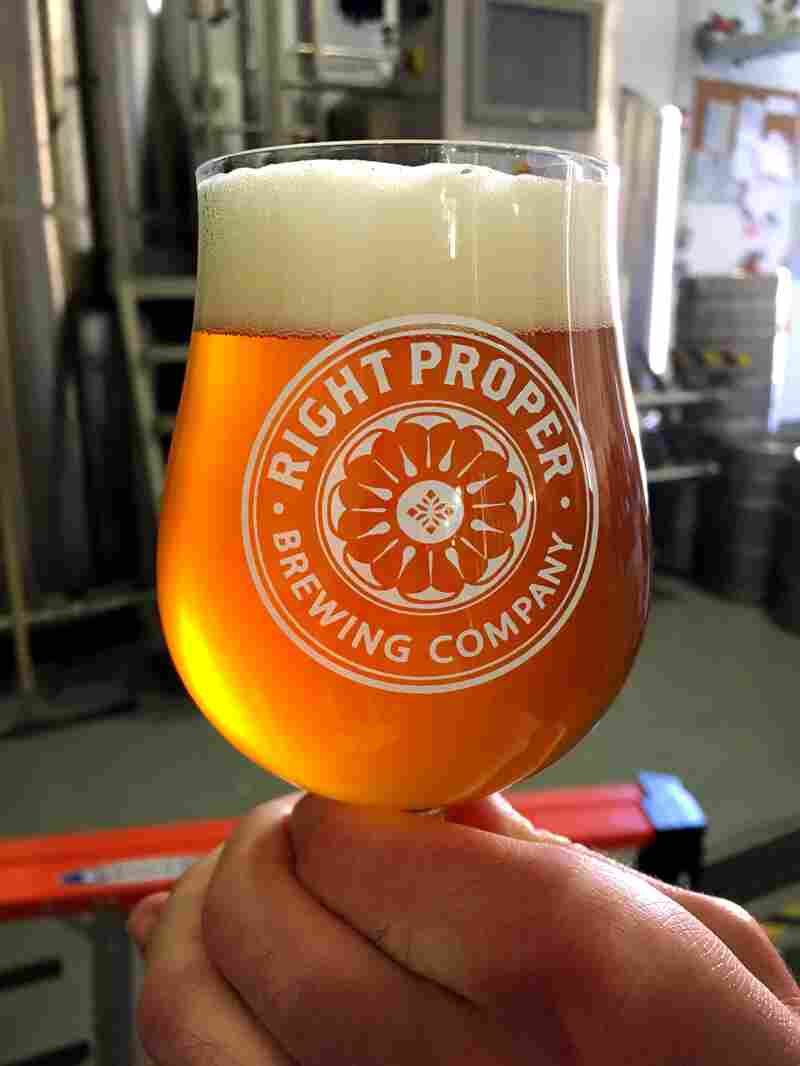 At Right Proper a month later, there was no baby shower, but there was a small homebrew competition underway. It would be the first time anyone tasted "Soused" before its official release — naturally, at Pontiak's headlining show at the DC9 nightclub.

(In a cruel twist of bad timing, I stopped drinking as part of a larger "cleanse" for a month — it's almost done, thank Baphomet — so I brought along a designated drinker, my friend Grant Dickie. He's a web developer at NPR, but more integral to the cause, a homebrewer and Sunn O))) fan.)

Soused pours a glowing orange and breathes in a deep citrus, like a marmalade syrup. The foam is thick and frothy and stubborn, and takes a few sips to dissipate. "On first blush, it's almost like alcoholic Tang," Dickie says. There's a strong kick of Mosaic, but the tropically-flavored comet hops bring up the rear. At 7.0% ABV, it's one of the boozier offerings from Right Proper, a brewery that tends to prefer session beers and only has a couple IPAs to its name.

"It really hits the back of the throat," Dickie says after a couple minutes. "The flavor stays in my mouth for a long time. Kind of like Sunn O))), it passes right through — the note starts here [points at chest] and keeeeeeps going."

Meanwhile, the beer evolves in the glass. The juniper tea, hidden in the foam, now comes through. It's a little bitter, like gin, swirling in the caramelized sweetness of the orange. Mosaic and comet hops can be really aggressive and aromatic. There's a delicate line to balance in order to bring out more subtle flavors.

Hits hard up front, but its notes linger long and deep. Sounds like a Sunn O))) record.

"Soused" — the collaborative IPA from Right Proper, Stone and Pen Druid — will distribute to Maryland, Virginia and parts of New York over the next month.