Accessibility links
Global Record Business Saw Sizable Growth Last Year, Thanks To Streaming : The Record An annual report on the worldwide recording industry has some good news, especially when it comes to on-demand listening. 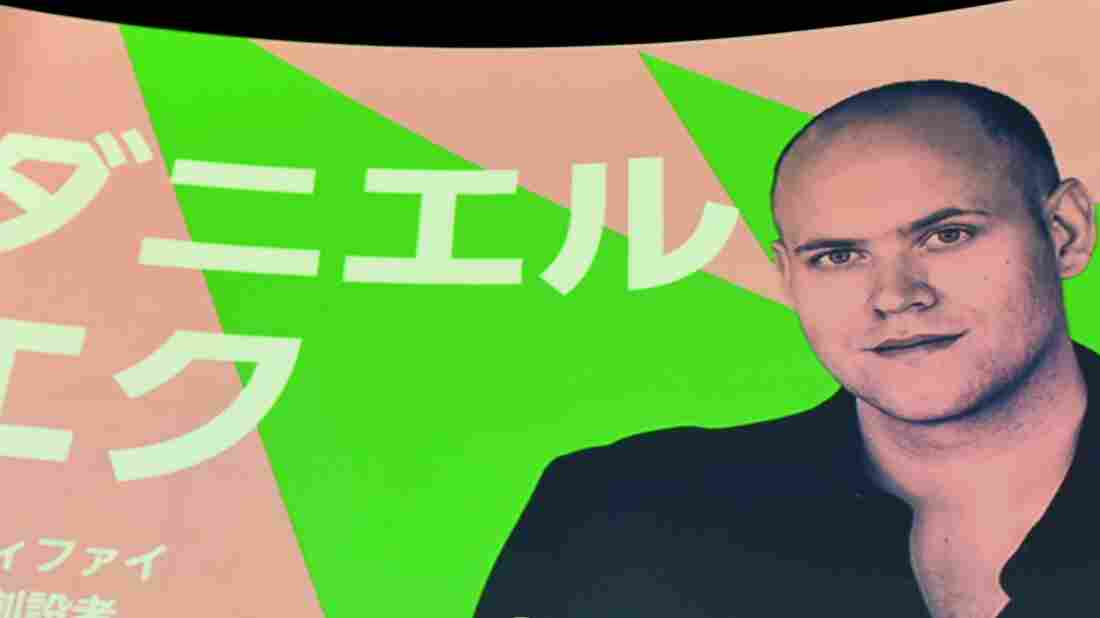 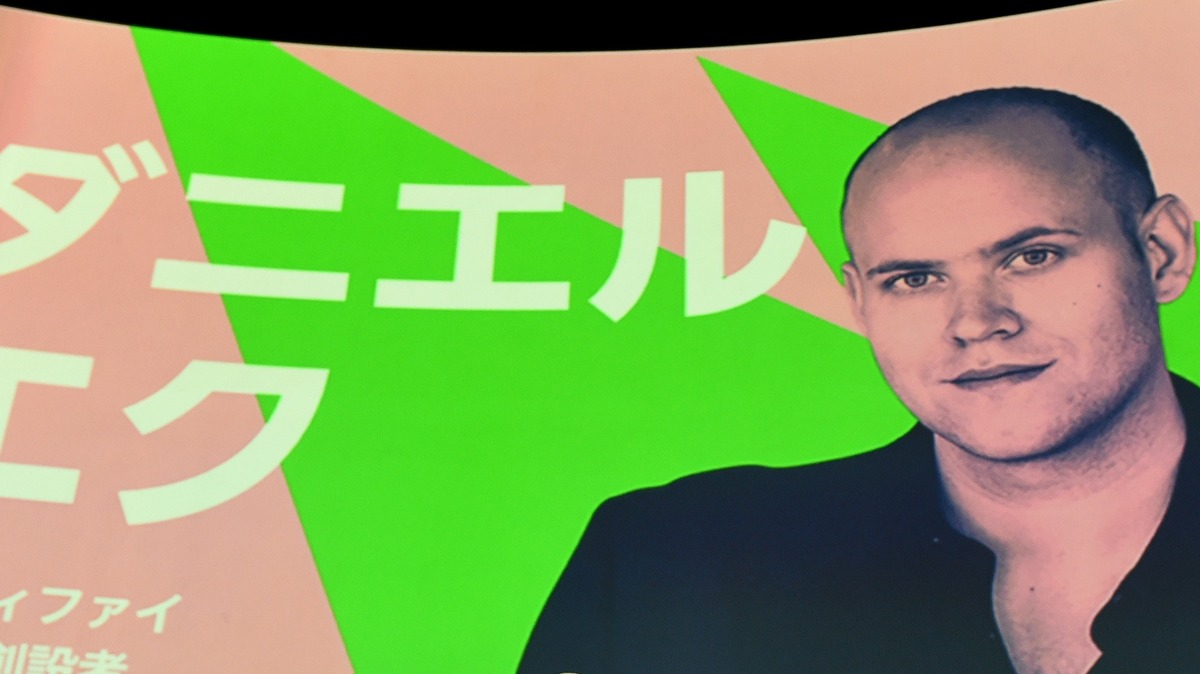 Daniel Ek, CEO of Swedish music streaming service Spotify, on a banner during the launch of Spotify in Tokyo, Japan on September 29, 2016.

A new report shows that the worldwide recording industry added nearly $1 billion in revenue in 2016, growth that is almost entirely due to the growth of streaming. The annual "Global Music Report," released today by the International Federation of the Phonographic Industry (IFPI) — an umbrella group representing major labels worldwide — says that revenues from streaming were up 60.4 percent over 2015, and the industry overall grew by 5.9 percent.

Streaming's ascent has made the industry very, very willing to experiment. This wasn't always the case.

After hitting record highs in the CD era, the global market for recorded music began shrinking dramatically in 2000. It lost 40 percent of its total value over the following 14 years, which spanned the birth of Napster and the file-sharing era, the decline of the CD and the rise and fall of the MP3. (Piracy was a factor in this decline, but its effect was generally overemphasized by record labels, who had seen fantastic returns from the high profit margins they made on CDs. Following these gains, the digitization of the industry was lamented instead of embraced. This was, in part, due to the lower margins on digital products, causing several years of lean times. That Apple's iTunes Store cut 30 percent off the top didn't help. We'll come back to that.)

Then came streaming — which the record industry warily, then wholeheartedly, embraced. In 2015, music streaming resulted in the first increase in global revenues since 1999, by a not-terrible $500 million. As Martin Mills, the chairman of the Beggars Group family of independent labels, put it in today's report: "Streaming continues to open up new markets for our artists that just weren't there before for us — Russia, Brazil, Mexico. In some cases it is creating a recorded music market where there simply wasn't one."

What the industry has learned — after letting the iTunes Store dominate the digital market (and take that 30 percent cut of it) and after seeing signs of promise from the nascent Spotify — is that it should encourage competition between services and liberally license the music it controls. The figures in the "Global Music Report" bear out the strategy. "Spotify's success story has expanded beyond established markets, with Brazil and Mexico now making up two of our top four countries worldwide by reach," says Will Page, the company's director of economics, in a statement provided to NPR Music.

The IFPI estimates 97 million people worldwide now pay for access to streaming services. Those include Spotify, Apple Music and Deezer (which has a strong showing in Europe and has failed to gain significant traction stateside), as well as region-specific services like Anghani in the Middle East, Saavn in India and Chinese web giant Tencent's three services — QQ Music, Kugou and Kuwo.

Here's a look at some highlights from today's report:

Beyoncé's Lemonade was the top record of 2016 worldwide, selling 2.5 million units. (That figure includes what's called "streaming equivalent albums," where 1,500 streams of any song from a record are counted as one unit "sold.") Adele's 25 was second at 2.4 million; Drake's Views was third, at 2.3 million.

It's been a couple of years since vinyl's "comeback" could reasonably be called a comeback — it is now simply a fact that, in a digital world, some people really do enjoy a large-format physical object, helping to offset a small part of the continued decline in interest in CDs. Still, that a format nearly a century old generated 3.6 percent of total global revenues is remarkable.

The global recording business is, like the art it oversees, as varied as the countries who contribute to it — even in our culturally, digitally and economically globalized world.

In the U.S. and the U.K., streaming music is the No. 1 source of revenue for the industry. But Japan (the second-most valuable country in the world to the recording industry) and Germany's (the fourth) recording industries still generate most of their income from CDs, though the format continues to slowly recede. This is due in part to cultural differences, including a wariness in both countries of subscriptions generally and, in the case of Japan, a love of collectibles. Streaming in Japan also had a tough start — Spotify debuted in the country only last September.

Sweden, the home country of Spotify, was a canary in the coal mine for the promise of streaming. After Spotify launched there in 2008 (it wouldn't make it to the U.S. until 2011 — the wary embrace of streaming we mentioned earlier), Sweden saw revenues increase even as the wider market contracted. Streaming now accounts for nearly 70 percent of revenues there.

The report also — anecdotally, at least — shows that countries' top albums are mostly dominated by artists native to them, while singles were largely homogeneous across the globe. Germany's top album of the year was Udo Lindenberg's Stärker Als Die Zeit, Japan's was Arashi's Are You Happy?. (South Korea is an outlier here. The country's beloved, homegrown pop industry dominated both singles — Twice's "Cheer Up" was at the top — and albums, with BTS' Wings taking the top album spot.)

In three words: experimentation, variegation and flooding (the zone).

"This is not simply another format transition," Universal Music digital strategy executive Michael Nash is quoted as saying in the report. "It is a fundamental transformation that is changing everything about the business. To raise the Mission Accomplished banner would be the worst mistake we could make."

It's also worth noting that the "Global Music Report" does not capture every angle of music's modern story — Martin Mills, while a legendary independent label executive, sits atop XL, which counts Adele among its roster.

"We're happy to see the first substantive industry-wide growth in years," writes Bandcamp, a popular marketplace for grassroots music sales, in a statement provided to NPR Music. But, it continues, "we've been seeing double digit annual sales growth since 2008." The company attributes that growth in part to fans' desire to support artists directly.

One focus of the mainstream industry's continued adaptation will be, as we learned earlier this year, attempts to get ahead of the technological curve. Investments in virtual- and augmented-reality platforms are already bubbling up. Personalization and music play are being encouraged — the lip-synch app Musical.ly was embraced (where five years ago, it might have been greeted with lawsuits and shut down) and now boasts 120 million users.

As massive countries like China and India continue to bring their music industries "above board" and more developed markets like the U.S. and U.K. play wildly with their properties, the upward trend will no doubt continue — but whether it will ever again reach its apex is an open question.