Accessibility links
Jonathan Demme's Musical Moments Made Sense : The Record The director's gleeful fusion of song and subject matter provided a guide to how personal playlists could serve broader narratives.

The director's song choices reflected a love for his characters and audience. 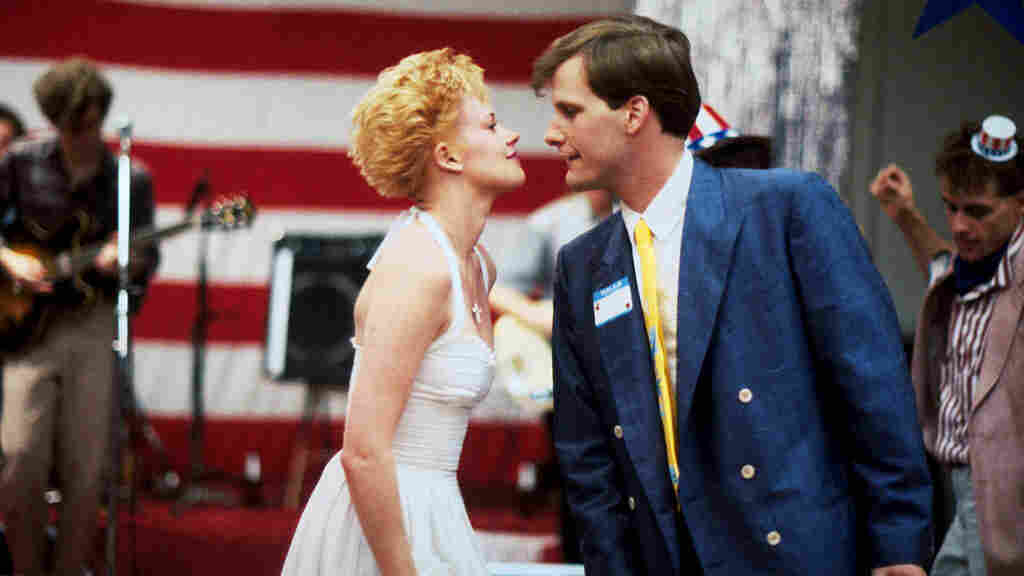 Melanie Griffith and Jeff Daniels were the stars of Jonathan Demme's Something Wild, but Demme's use of The Feelies (left) felt just as important. Courtesy of Criterion Collection hide caption 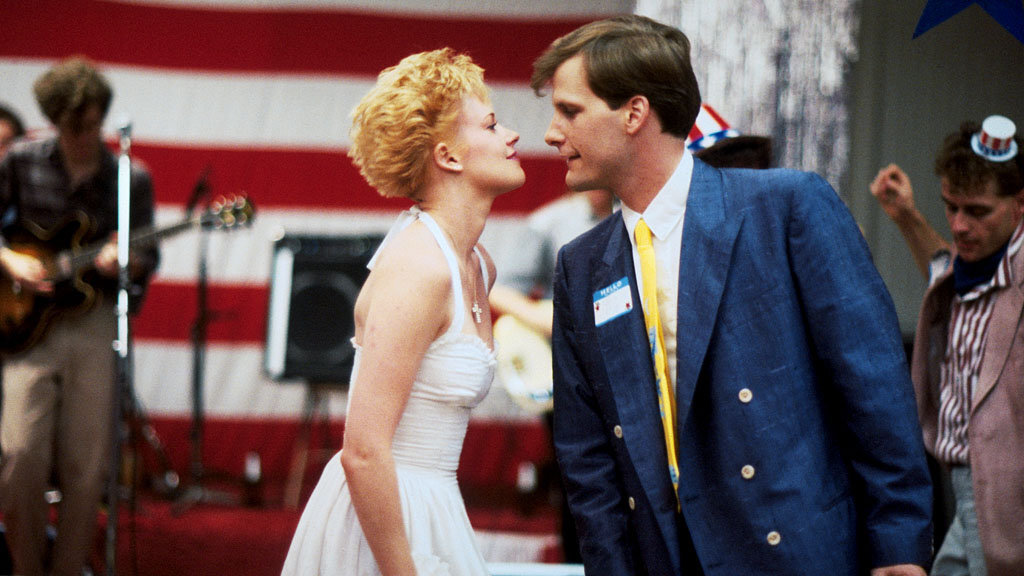 Melanie Griffith and Jeff Daniels were the stars of Jonathan Demme's Something Wild, but Demme's use of The Feelies (left) felt just as important.

One afternoon in 2009, I ran into Jonathan Demme on the sidewalk in Woodstock, N.Y. We'd known each other glancingly since the 1980s, thanks to a shared life in downtown NYC, seeing bands in clubs and going to screenings. As it happened, I was on my way to a film festival showing of a movie I'd made. And there was Demme, in town with his Neil Young Trunk Show, a follow-up to the seminal doc Heart of Gold (2006), ambling down the street by himself, looking around quizzically in the bright autumn sunlight, because that was one of his main modes: quizzical.

Jonathan Demme, Director Of 'Silence Of The Lambs,' Dies At 73

We said hi, chatted a bit, and the twinkle in his eye told me he appreciated the fact that I happened to be carrying in my arms a large and fairly heavy potted plant, which I had just purchased for $3 at a church rummage sale, partly to calm my nerves. Something about that gesture was very Demme — meaning wholly available to the vagaries of the moment. But what was even more Demme was the nature of the music I'd used in the movie I was about to show, which ranged from Pylon to Santigold to Syd Straw. It was a soundtrack-as-mixtape approach that I now realize, in the wake of his horribly sad passing, was almost entirely indebted to Demme's influence in general, and to Something Wild in particular.

It was 'Something Wild' that most brilliantly telescoped Demme's gleeful fusion of song and subject matter, and provided, for me and I suspect many others, a guide to how one could deploy one's personal playlist in the service of broader narrative interests.

It is no exaggeration to say that Jonathan Demme made me believe that one could channel a passion for music (I started out directing videos for R.E.M, Aimee Mann, Wilco, Throwing Muses and Vic Chesnutt, among others) into becoming a feature filmmaker. Demme entered my cinematic consciousness at a time when female avatars were few and far between, and somehow I sensed (even though I didn't know it at the time) that he completely supported women who wanted to make movies, and was to become an increasingly tireless booster of the creative impulse in others across both race and gender lines. Back then I simply yearned to try to do what he did — unite words and pictures to tell stories on a screen, with a propensity for humanism and a well-curated soundtrack. The breadth of his practice, shifting from dramas to comedies to documentariess, from Hollywood-backed fare to tiny indies, was an inspirational add-on.

Part of Demme's genius was to present moviemaking as a prime locus for avidity, open to all. His core energy, including when I saw him on the sidewalk that day, was both available and excitable. As has been widely remarked at this point, that aspect of his personality found perhaps its most enduring expression in his approach to and enthusiasm for music. He deployed it in his work in ways that surged across genres, slyly making pluralistic points while avoiding being merely cool or touristic, and always emphasizing fun.

Early on, Demme, who wrote rock criticism in his youth, had the Velvet Underground's John Cale score his Roger Corman-produced chicks-behind-bars debut flick, Caged Heat (1974). That was merely the beginning in a long career of inspired, and often repeat, sonic collaborations, in which David Byrne occupies a particular place of privilege — and really, one can never praise enough the molecular understanding of shooting and cutting live performance that is Stop Making Sense (1984). While Demme showcased some perhaps too-obvious heroes — e.g., Bruce Springsteen, whose title song to Philadelphia (1993) nevertheless perfectly fused itself to and fueled that film's dominant emotional tone — he was completely disinterested in white dude insularity. Think of the scene in Rachel Getting Married (2008) in which Tunde Adebimpe performs an a cappella version of Neil Young's "Unknown Legend." It's so very Demme in its casual championing of a mixed universe and affirmation of what it means to be a dimensional being.

But it was Something Wild (1986) that most brilliantly telescoped Demme's gleeful fusion of song and subject matter, and provided, for me and I suspect many others, a guide to how one could deploy one's personal playlist in the service of broader narrative interests. (I have to add that the renegade Nickelodeon series on which I was originating director, The Adventures of Pete & Pete, never could have boasted a soundtrack featuring Yo La Tengo and Magnetic Fields were it not for Demme's influence, not to mention cameos from Iggy Pop and LL Cool J.) Something Wild is at once exuberant and edgy, as much of an identity shape-shifter as its heroine, indelibly embodied by Melanie Griffith. There's something so particularly evocative about the way Something Wild operates – it's partly generational, but it's also dispositional. The movie feels born of a time when you could stroll into a record store and flip through bins of vinyl, or buy a used album off a dirty blanket on the sidewalk for a buck, or hook into a track as you heard it float past you on a boombox. Life at that time invited you to find songs in public if you wanted to find them, and those songs were an invitation to a certain way of living. Demme optimized that feeling; it was integral to his enterprise. Music was tactile, there to be discovered, then shared, and not in the way we tend to use the word "sharing" now.

Consider the opening to Something Wild, the camera gliding across the Hudson River to open up and probe the world of lower Manhattan, the twin towers still standing. David Byrne and Celia Cruz's "Loco De Amor (Crazy for Love)" percolates and then blasts its brassy horns, a heady fusion of downtown art-pop and salsa queen styling. It's a song that takes us by the hand, promising something dedicated to fluidity — and then the movie delivers it. Later on, The Feelies — that shambling band whose carefully-calibrated tracks shift from muted emotion to frantically strummed bursts of energy, and much beloved by Demme — turn up to perform a cover of Bowie's "Fame" in a high school reunion scene. It's a deadpan cameo, a private homage, but in every way it also serves the dominant narrative interests, and it feels like a gift. At the end, reggae singer Sister Carol literally steps out of her cameo as a waitress into performer mode with her iteration of "Wild Thing." Clad in Jamaica-hued garb, standing in the doorway of a downtown building now no doubt long lost to gentrification, Sister Carol frankly engages Demme's lens as the closing credits roll, returning the movie from its more harrowing aspects to the sheer necessity of everyday joy.

All of these musical moments gave the feeling that Demme was something of a low-key conjurer, but of course there was a major focus and rigor behind his approach in Something Wild, and in everything else that he did. He just chose to never show his seams. And only now is it fully evident what a great, extended, cinematic party he threw for anyone who cared to join it, so that his heartfelt, generous example might be their example, too.