Accessibility links
How Fyre's Organizers Used 'Influencers' To Market A Festival That Didn't Exist : The Record The event's marketing pitch borders on self-parody. 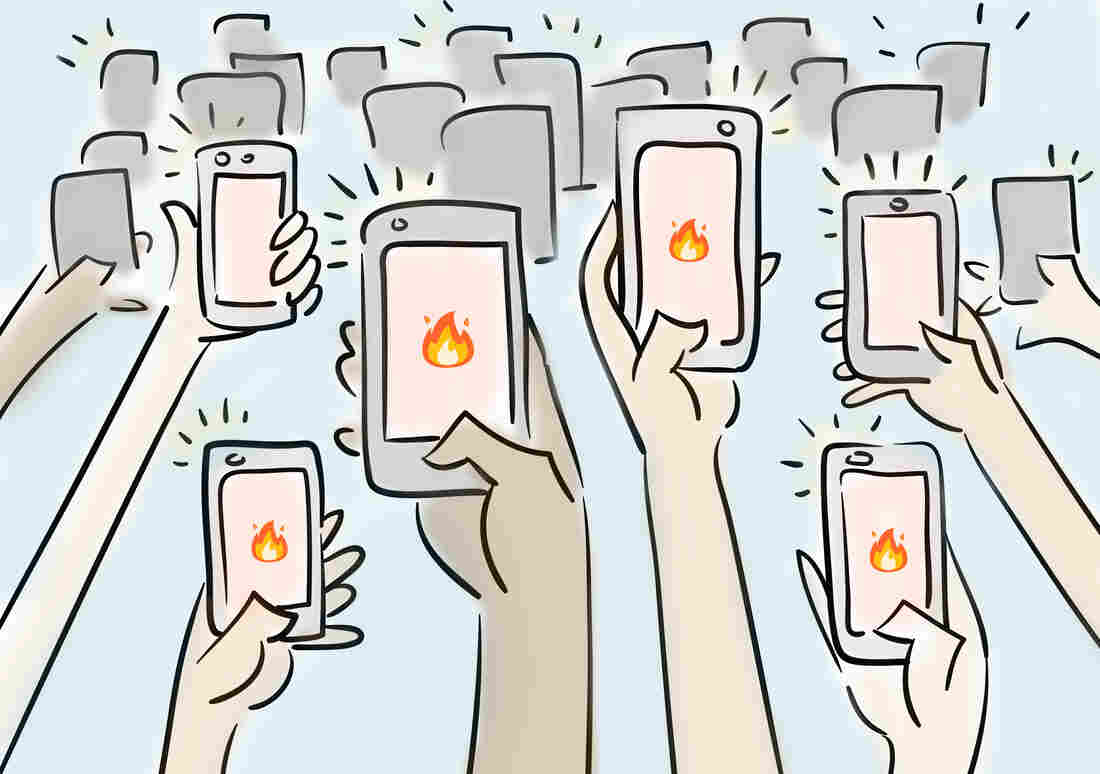 The plan was to build awareness and attendance by recruiting influencers who would promote the festival on their social media accounts. Dubbed "the Fyre Tribe," each was given free tickets and flights in exchange for taking part in a coordinated marketing effort. Gozded/Getty Images/iStockphoto; Flame emoji via emojipedia hide caption 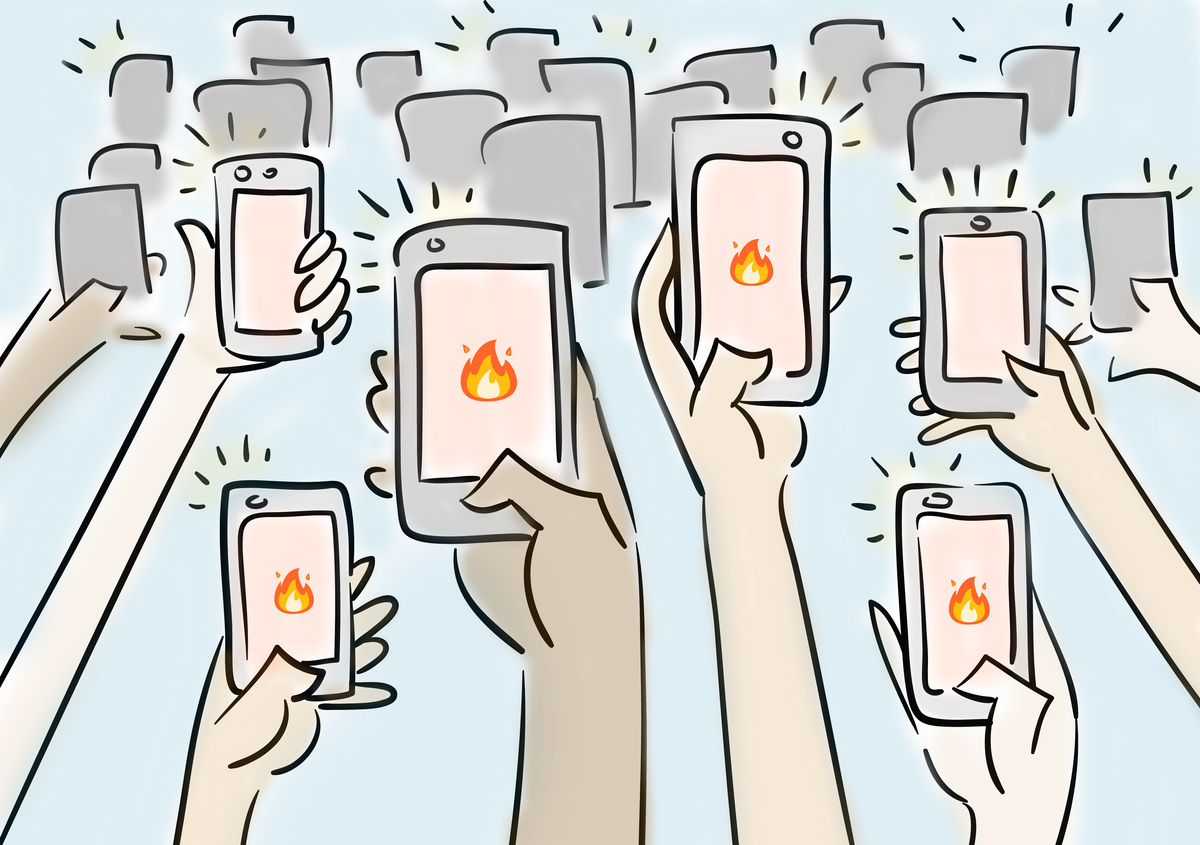 The plan was to build awareness and attendance by recruiting influencers who would promote the festival on their social media accounts. Dubbed "the Fyre Tribe," each was given free tickets and flights in exchange for taking part in a coordinated marketing effort.

Last fall, at the Web Summit tech conference in Lisbon, Portugal, the rapper Ja Rule addressed a small audience seated in front of the event's music stage: "I'll let my partner-in-crime here Billy McFarland give you all an introduction of what Fyre is." At the time, Ja Rule and McFarland were promoting an app that would, we now know, share its name with one of the least-successful music events in recent memory, currently the subject of a $100 million lawsuit. The Fyre app, like McFarland's other venture Magnesis (a rarefied "concierge" for the young, beautiful and hip), is directed at "young urban professionals" and "influencers" (brace yourself to see that word a lot). The app allowed promoters, venues or just whomever to book artists for small, lucrative shows for small, well-heeled audiences — much like the concept that underpinned the event with which it now indelibly shares a name.

In the social media-driven present, these influencers are one-person marketing vehicles for all types of products, capitalizing on conventionally attractive faces and the enviable lifestyles they portray on their profiles. They were, as we see from the marketing deck for Fyre and the Fyre Festival obtained by Vanity Fair, the ostensible key to success for McFarland's and Ja Rule's disastrous music event.

The first 10 pages of the 43-page presentation focuses on the app, touting a roster of artists including Iggy Azalea, Queen Latifah, Lil Wayne, DJ Khaled and "hundreds of other notable artists, athletes and influencers." It operates by allowing those looking to book artists on its roster to negotiate offers and payments and that talent to accept it, with Fyre taking a 10 percent commission from bookers.

The remaining 33 pages focus on the first edition of the Fyre Festival — yes, first. The deck explains Fyre Festival's long-term vision: new event spaces, built from scratch — with the Trumpian phrase "through the purchase of significant land" — each year for the next five years, "referencing the five elements of the earth." Its inaugural element? Water. (Irony alert: This despite there reportedly being precious little of it on hand for last week's attendees).

"Come, seek, for searching is the foundation of fortune," goes the Zoolander-esque tagline. "What if we reimagined what it means to attend a music festival," one slide wonders. The next: "The actual experience exceeds all expectations and is something that's hard to put into words," a statement that, if you replace the word 'exceeds,' is woefully accurate in retrospect.

The plan was to build awareness and attendance by recruiting — you guessed it — influencers, who would promote it on their social media accounts. Dubbed "the Fyre Tribe," each was given free tickets and flights to the festival in exchange for taking part in a coordinated marketing effort that had each — over 30 are listed, with links, in the deck — post an "ambiguous" orange slide on their Instagram with the hashtag #FyreFestival. In the aftermath of last week's debacle, most scrubbed their accounts of the promotion, though at least eighteen remained live as of this writing (see here, here and here for examples). Kendall Jenner, she of the lamentably anti-woke Pepsi ad debacle, was central to the Fyre Festival promotional campaign too, announcing the festival's first headliner, G.O.O.D. Music.

That each post we reviewed seemed to run afoul of Federal Trade Commission rules around paid promotion may come to haunt the Fyre Tribe, however. Last month the FTC sent out "more than 90 letters reminding influencers and marketers that influencers should clearly and conspicuously disclose their relationships to brands when promoting or endorsing products through social media." The letters "were sent in response to a sample of Instagram posts making endorsements or referencing brands." (It also issued a template letter that begins "Dear {Influencer}.")

As mentioned, a suit against the festival's organizers was filed just two days after the situation on the ground became public. The FTC tells NPR that, so far, all cases brought over paid (but undisclosed) social media marketing campaigns have been against companies, not individuals, though a class action suit brought by individuals outside the FTC remains an open question.

Updated May 2, 4:15 p.m.: This article has been clarified to reflect new information provided by the Federal Trade Commission on the legality of compensated social media promotions.