Accessibility links
Is Pharrell, The First Man To Model A Chanel Bag, Pushing Any Boundaries? : The Record In promoting a $4,000 handbag, is the producer widening the boundaries of hip-hop fashion?

Is Pharrell, The First Man To Model A Chanel Bag, Pushing Any Boundaries?

Is Pharrell, The First Man To Model A Chanel Bag, Pushing Any Boundaries? 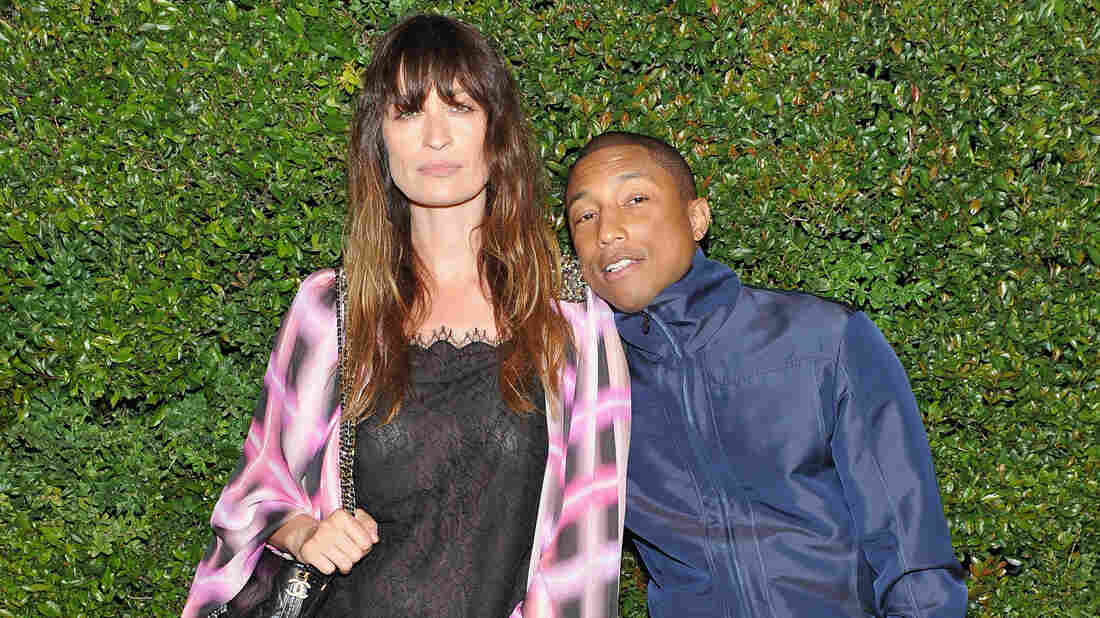 Caroline De Maigret and Pharrell Williams attend a dinner held in their honor by Chanel in April, 2017. Williams became the first male to front a campaign for the luxury fashion brand's handbags. Donato Sardella/Getty Images for CHANEL hide caption 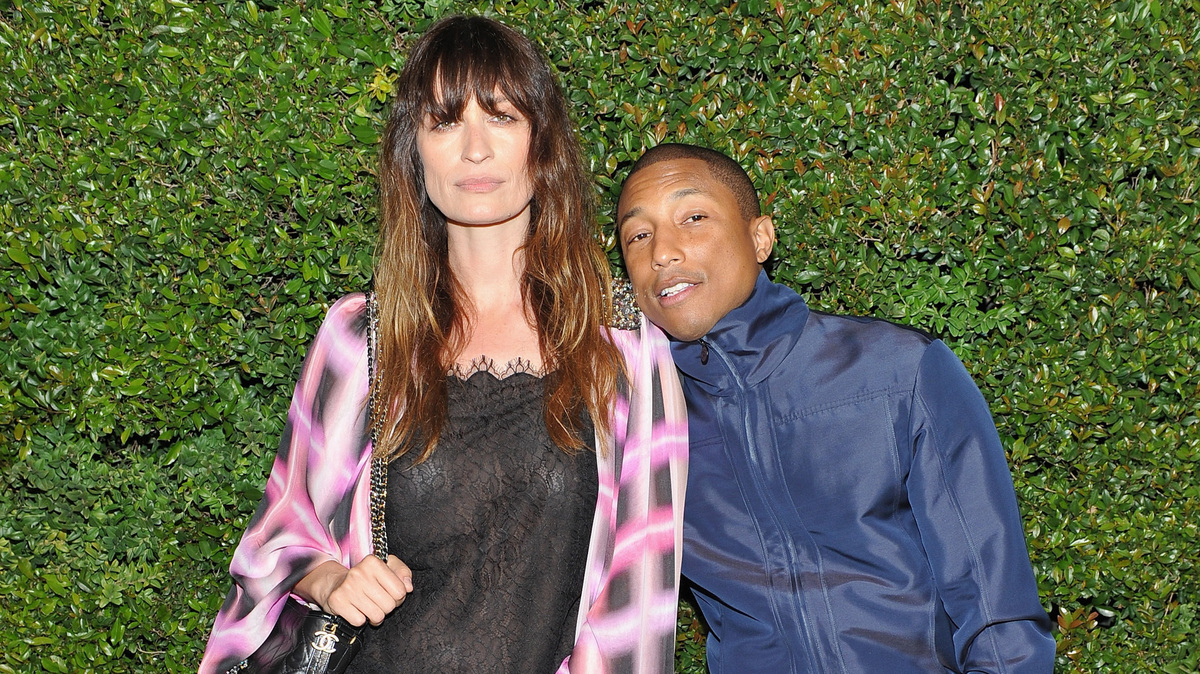 Caroline De Maigret and Pharrell Williams attend a dinner held in their honor by Chanel in April, 2017. Williams became the first male to front a campaign for the luxury fashion brand's handbags.

Last week, Pharrell Williams made history as the first man to ever front a handbag campaign for Chanel. In a video released by the historic Parisian fashion house, the musician enters an empty soundstage wearing one of the brand's tweed blazers, while the camera pans to the black alligator and lambskin hobo bag hanging beside him. Though Kristen Stewart, Cara Delevingne and couture muse Caroline de Maigret will also take part in the campaign, Karl Lagerfeld, who has helmed Chanel since 1983, said his intention was to show that the bag can be worn in "many different circumstances." For instance, by men who may (or may not) be 11-time Grammy winners.

The partnership comes as gender binaries have become increasingly conflated on the runways over the past two years. Alessandro Michele's Gucci collections — an androgynous combustion of sequins, lace and all-over mesh — and Raf Simons' debut runway for Calvin Klein in February are two highly successful recent examples that have palpably set a different tone on the red carpet. Comfortably wearing Chanel womenswear isn't entirely new for Pharrell either; he sported a peach tweed blazer for the 2016 Grammy Awards, walked the Metiers d'Art pre-fall runway in December at the Ritz Paris and regularly piles on the brand's fine jewelry. He also dipped his toes in the unisex footwear market last year, creating a collection of super-saturated Stan Smith sneakers for Adidas, part of a partnership going back to 2014, that sold out in less than 48 hours.

But Adidas sneakers — which have been part of the hip-hop conversation since before Run DMC's 1986 song "My Adidas" — are one thing. That the guy who got his start as one-half of the Neptunes and subsequently went on to produce music for Jay Z is suggesting straight men can and should make their girlfriend's handbag their own? It goes completely against the historically masculine core and "the clearly defined gender roles within the hip-hop world," says Elena Romero, an Adjunct Assistant Professor at the Fashion Institute of Technology and the author of Free Stylin': How Hip Hop Changed the Fashion Industry.

You could argue that Pharrell's Chanel is yet another thread woven into the long-established practice of male hip-hop artists challenging – or reorienting — gender identity and the associations of certain pieces by incorporating traditionally female elements into their aesthetic. Take, for example, the diamond studs that became a symbol of machismo and success in the 90's when worn by hip-hop moguls like P. Diddy, Tupac and Jay Z. The adoption of skinny jeans in lieu of the oversized is another far-reaching, highly noticeable shift. Lace, which was historically worn by men in the 17th century to connote wealth and later came to epitomize bridal femininity, became bohemian when worn by Jimi Hendrix and flamboyant through Prince. But it was Wiz Khalifa, a burgeoning style star with a street-meets-stoner flare, who made the textile edgy when he sported an unbuttoned black lace blouse by Saint Laurent's Hedi Slimane. (Khalifa's style consultant eventually went to work for Kanye.) The heavily tattooed Atlanta rapper Young Thug, who has drawn comparisons to Andre 3000, stunned by slipping into a heavily ruffled Alessandro Trincone gown for the cover of his 2016 mixtape. And Jaden Smith, who has long promoted the importance of experimenting with personal style, wore head-to-toe womenswear for Louis Vuitton's Summer/Spring 2016 Final Fantasy-themed campaign.

Whether or not you consider each of these to be fashion anomalies, they are all statements on masculinity within the hip-hop world.

But should we expect these boundaries to continue blurring? Romero doesn't think so. "There are several artists who have taken fashion to an extreme — think Pharrell, Kanye, A$AP Rocky. However, eclectic dressing is for a few. I don't see the average hip-hop head ever wearing skirts or traditional women's clothes. Most guys look at this as being 'gay' and socially unacceptable."

Instead, she points to early female rappers as the ones who had the greatest impact on gender identity. "In the early days of hip-hop, most young ladies dressed like the fellas, myself included. The exception would be the hairstyle and the accessories. We wore brass buckle name belts, shell-top Adidas, colored Lee jeans and Le Tigré shirts, sheepskin coats, and gazelle-style glasses just like the guys," she says. "To some degree, early women in hip-hop dressed down as a way to fit in with the boys — whether through music, dance, or art. Once able to be comfortable in the spotlight, there was room to experiment."

Essentially, early female hip-hop pioneers wanted to communicate the strength of their lyrical abilities, and therefore downplayed their sexuality as a means of letting their talent shine. Romero cites Roxanne Shante, Salt-N-Pepa, MC Lyte, and Queen Latifah — who brought an afro-centric sensibility — as examples. "Missy Elliot was super sporty," she says. B-girls like Rokafella, as her name implied, had to 'Rock like the fellas.'"

One of the hip-hop world's greatest problems, she says, is the over-sexualization of the black body and the notion that "selling sex is equally as important as demonstrating lyrical talent." So while Pharrell's decision to proudly wear the $4,000 Chanel handbag hopefully inspires more men to keep experimenting, maybe it's time for women MC's to start making their way into menswear campaigns.