Accessibility links
The MP3 Is Officially Dead, According To Its Creators : The Record The MP3 upended the way the world receives and hears music, for better and for worse. Now it's dead.

The MP3 Is Officially Dead, According To Its Creators

The MP3 Is Officially Dead, According To Its Creators 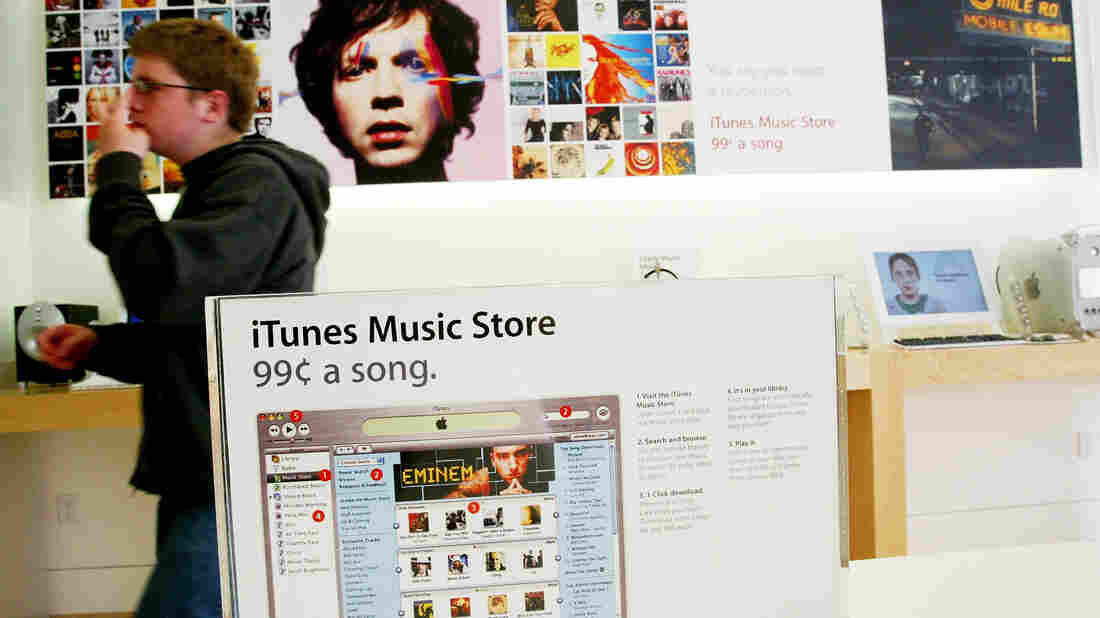 A 2003 display for the iTunes Music Store ushers in a new age for the music business, shortly after its introduction. The iPod helped turn around Apple's fortunes and brand identity, while the creators of the MP3 had regarded a portable player as a mere storage device. Justin Sullivan/Getty Images hide caption 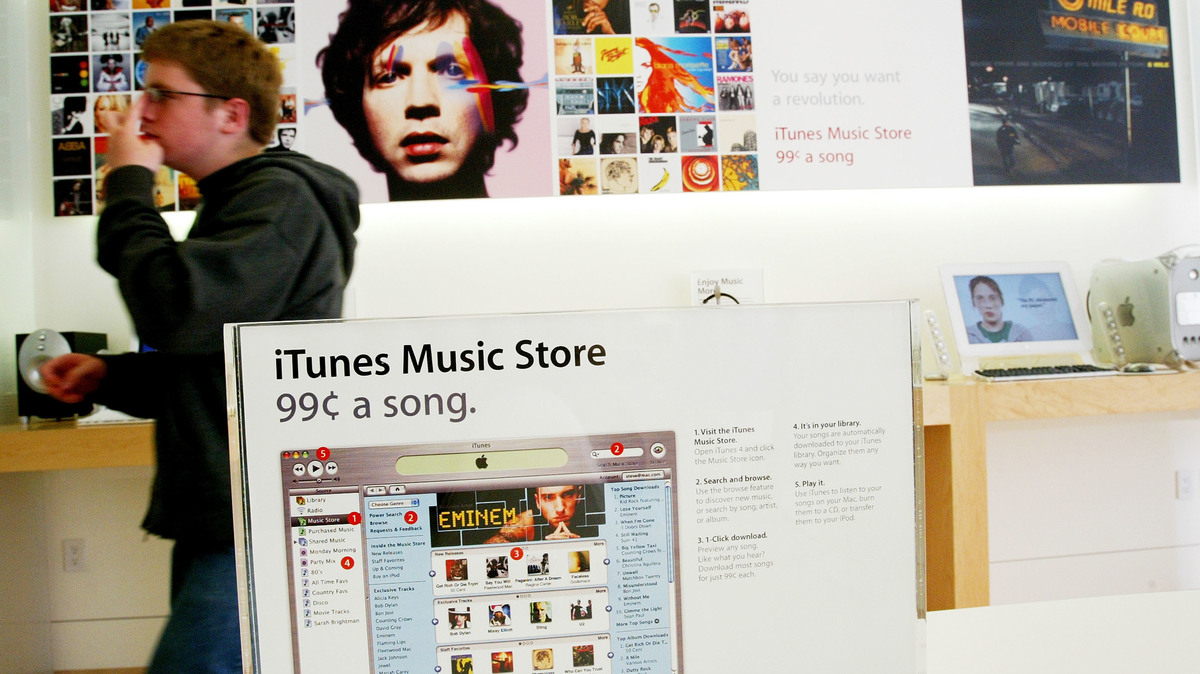 A 2003 display for the iTunes Music Store ushers in a new age for the music business, shortly after its introduction. The iPod helped turn around Apple's fortunes and brand identity, while the creators of the MP3 had regarded a portable player as a mere storage device.

"The death of the MP3 was announced in a conference room in Erlangen, Germany, in the spring of 1995."

So opens Stephen Witt's How Music Got Free, an investigation into the forced digitization and subsequent decimation of the music business, from which it has only very recently started to recover. That ironic conference room eulogy actually took place just before the compression algorithm caught on (don't worry, we'll explain in a bit). Soon, the MP3 not only upended the recording industry but, thanks to the iPod, also contributed to Apple's late-'90s transformation into one of the most successful companies in history. (On Tuesday, the tech giant passed $800 billion in market capitalization, the first U.S. company to do so.)

But now, 22 years later, the MP3 truly is dead, according to the people who invented it. The Fraunhofer Institute for Integrated Circuits, a division of the state-funded German research institution that bankrolled the MP3's development in the late '80s, recently announced that its "licensing program for certain MP3 related patents and software of Technicolor and Fraunhofer IIS has been terminated."

The MP3: A History Of Innovation And Betrayal

Bernhard Grill, director of that Fraunhofer division and one of the principals in the development of the MP3, told NPR over email that another audio format, AAC — or "Advanced Audio Coding," which his organization also helped create — is now the "de facto standard for music download and videos on mobile phones." He said AAC is "more efficient than MP3 and offers a lot more functionality."

As Witt illustrates throughout his excellent opening chapters, the MP3, before upending the musical world as we knew it, almost died in the research lab. The team of engineers that invented the format was attempting to make it possible to send audio over telephone lines, which could only transmit small amounts of data. Fraunhofer — in competing for the legitimacy it needed to persuade tech companies to actually use MP3s, and so actually make money — hit numerous speed bumps. It was repeatedly beleaguered by clever corporate sabotage and later by piracy. Other failures hinged on the need for the world to catch up with the technology's possibilities: Along the way, one computer engineer on the team had a patent for a music streaming service denied by the German government because it was technologically absurd at the time. Another innovation the team failed to leverage? The portable MP3 player.

In early 1995, the format was on life support, with one licensing deal being the use of the technology by hockey arenas across the U.S. (That spring meeting in which the MP3 was declared dead came months later, after another failed pitch that denied it being standardized and widely adopted.) A little later, Fraunhofer began giving away the software that consumers needed to turn compact discs into MP3s at home. The rest is recent history.

So is it the end of an era? We may still use MP3s, but when the people who spent the better part of a decade creating it say the jig is up, we should probably start paying attention. AAC is indeed much better — it's the default setting for bringing CDs into iTunes now — and other formats are even better than it, though they also take up mountains of space on our hard drives.

And it's not just that more efficient and complete ways of storing music have been developed. There was a deeper problem. The engineers who developed the MP3 were working with incomplete information about how our brains process sonic information, and so the MP3 itself was working on false assumptions about how holistically we hear. As psychoacoustic research has evolved, so has the technology that we use to listen. New audio formats and products, with richer information and that better address mobile music streaming, are arriving.

Deezer, a music streaming company relatively popular in its native France, launched in the U.S. offering "high-resolution" streaming, for double the price of a Spotify account. Tidal did the same. Neil Young tried his hand with the hotly tipped Pono. While all three are not exactly taking over the world — Pono, in fact, is officially dead, rebranded "Xstream" — the record business has put its stamp of approval on the idea, at least. "Master Quality Authenticated" is a promising new technology that uses a type of audio origami to spare cellular data when necessary and to "bloom" in quality when it's not — though it has drawn pointed criticism for being a closed loop that allows for recording industry cash-ins. It wouldn't be the first time.

The formats that convey art and media to us also delineate that media; vinyl records require a session-interrupting flip, which The Beatles brilliantly exploited by creating an infinite loop of gibberish at the end of Sgt. Pepper's second side. The VHS tape in both image and sound was as soft and fuzzy as a worn teddy bear, while new high-definition televisions render images perhaps too robotically, tracking movement like T-1000. The MP3, as mentioned, enabled millions or billions of song listens, just with incorrect biological assumptions. The lesson seems to be, simply, that our media will always be as exactly imperfect as we are.