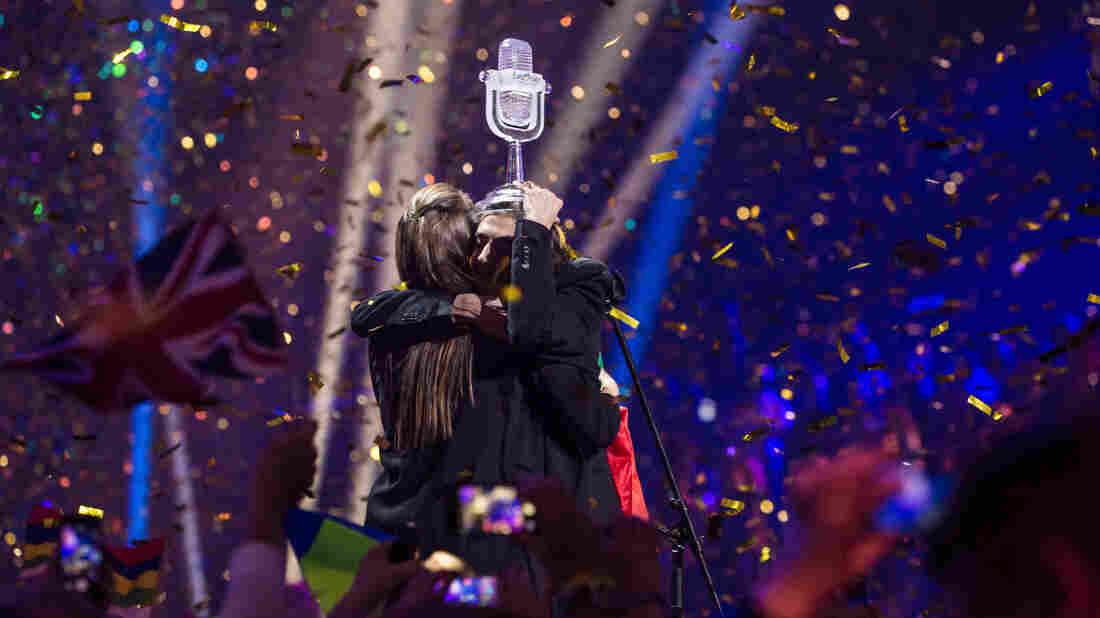 Eurovision's 2017 contest ended with Portugal's Salvador Sobral holding aloft his trophy and hugging his sister Luisa Sobral, who composed with 'Amar Pelos Dois,' the winning song. The pair performed it as a duet to close the evening. Brendan Hoffman/Getty Images hide caption 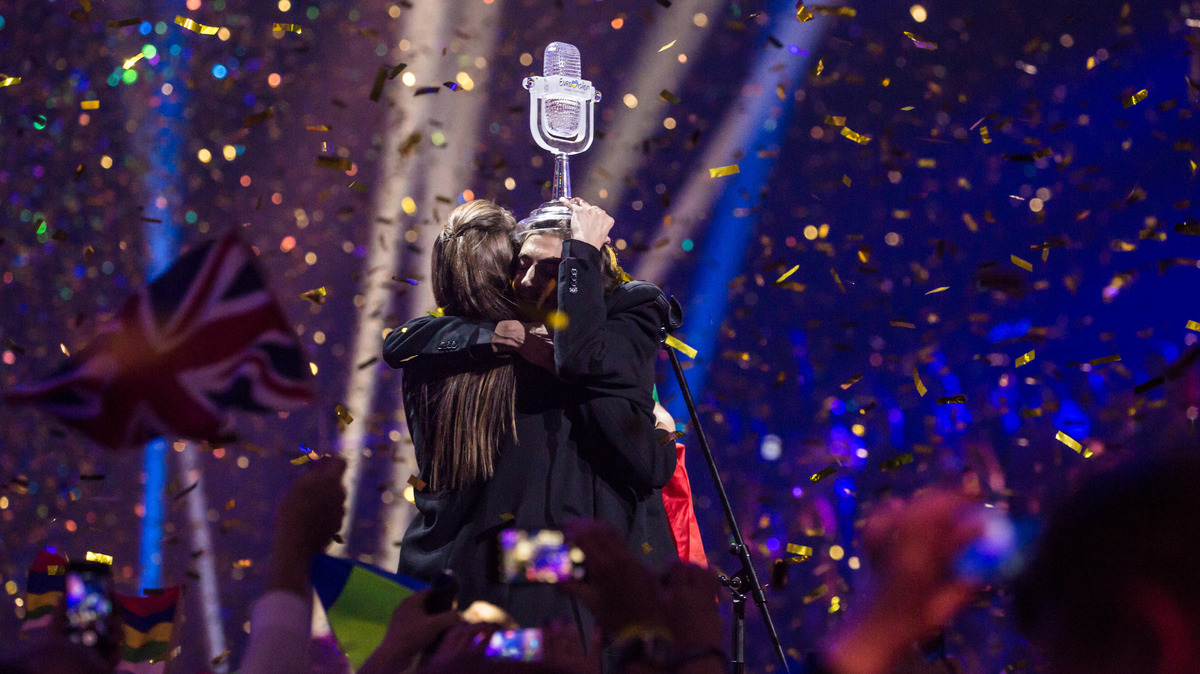 Eurovision's 2017 contest ended with Portugal's Salvador Sobral holding aloft his trophy and hugging his sister Luisa Sobral, who composed with 'Amar Pelos Dois,' the winning song. The pair performed it as a duet to close the evening.

Portugal won the Eurovision Song Contest in Kiev, Ukraine on Saturday, marking the first time that country has won the contest since 1964. The winning song, "Amar Pelos Dois," had been a favorite through last week's semifinals.

In his acceptance speech, singer Salvador Sobral railed against what he called "disposable music," saying he thought his win was "a victory for music with people who make music that actually means something." After his win, Sobral reprised the winning song as a duet with his sister Luísa, who wrote and composed it.

Sobral first performed his winning ballad bare-bones, stripped of many of the larger-than-life on-stage (and off-stage) treatments associated with Eurovision. There were no backup dancers or pyrotechnics; a stage manager urged audience members in the arena not to cheer as Sobral's quieted performance began. Another relatively rare feature of this year's winner was that Sobral sung in Portuguese, not English, which often hampers a country's shot at winning. The last non-English winner was in 2007, when Serbia's Marija Šerifović won with "Molitva."

Kristian Kostov, of Bulgaria, came in second with "Beautiful Mess."

Eurovision began 1956, with seven countries from continental Europe competing. The contest has since grown to into a mega-production; this year's show featured acts from 42 countries, including non-European countries like Israel and Australia.

The winner is determined through a mix of voting from viewers at home and the opinions of music industry professionals from each represented country, through a complex format intended to maximize the chances for a dramatic reveal of the winner. The competition's rules, like finding the baby in a king cake, have the winning country host the following year's contest.

This year's contest was in danger of being overshadowed by politics, however, despite the rules generally discouraging political overtures.

Ukraine, the winner of last year's competition with a song that referenced the mass deportation of Crimean Tatars during World War II, was viewed as thinly-veiled criticism of the 2014 annexation of Crimea. Ukraine and Russia have publicly sparred over the win since.

Julia Samoylova, intended to be Russia's Eurovision envoy this year, was banned by Ukrainian authorities from entering the country after the host country learned she'd performed in Crimea without permission from Ukrainian authorities following the territory's annexation in 2014. After failing to convince Ukraine to reverse its decision to bar Samoylova, Eurovision organizers gave Russia the option to have her perform remotely or for Russia to choose a different artist, an offer rejected by the Russian channels which selected her. In a statement quoted by the Tass news agency, Russian representatives said the offer "clearly runs counter to the very essence of the event."

Aside from the political imbroglios, Eurovision has for most of its existence been known for its oddball performances — and this year was no exception.

Romania's entry, "Yodel It!" by Illinca and Alex Florea, indeed had, as the title suggests, a fair bit of yodeling, which also featured rap as well as regular singing.

Jacques Houdek's "My Friend," from Croatia, was a duet, fairly common in Eurovision. But here, Houdek's partner was himself, with Houdek dramatically pivoting each time he switched voices. Not to mention the fact that he did all this in two languages — and neither Croatian.

Italy, a favorite to win this year, ended in sixth place. Francesco Gabbani's "Occidentali's Karma" was staged featuring a man in a gorilla costume dancing on the stage — a nod, the singer said, to anthropologist Desmond Morris' book The Naked Ape, which helped inspire the song.

Moldova entered "Hey Mama," by the Sunstroke Project, a band whose exuberant saxophonist became the "Epic Sax Guy" meme when the group first brought it to Eurovision in 2010. Moldova's entry this year was about an overprotective mother-in-law. The band is, no doubt, hoping "Hey Mama" will manage to go viral as well.

For its part, the diminutive Balkan nation of Montenegro brought "Space," by Slavko Kalezić, who donned a mesh shirt, sparkly pants, and danced around the stage waving his unnaturally long pony tail in a circle. He did not make it to the final.

Next year's contest is scheduled for May, in Portugal.