Accessibility links
Dramatic Fallout For PWR BTTM After Accusations Of Sexual Misconduct : The Record In the days around the release of its second album, PWR BTTM was dropped by its label and its management and canceled tour dates after member Ben Hopkins was the focus of allegations on social media.

Dramatic Fallout For PWR BTTM After Accusations Of Sexual Misconduct

Dramatic Fallout For PWR BTTM After Accusations Of Sexual Misconduct 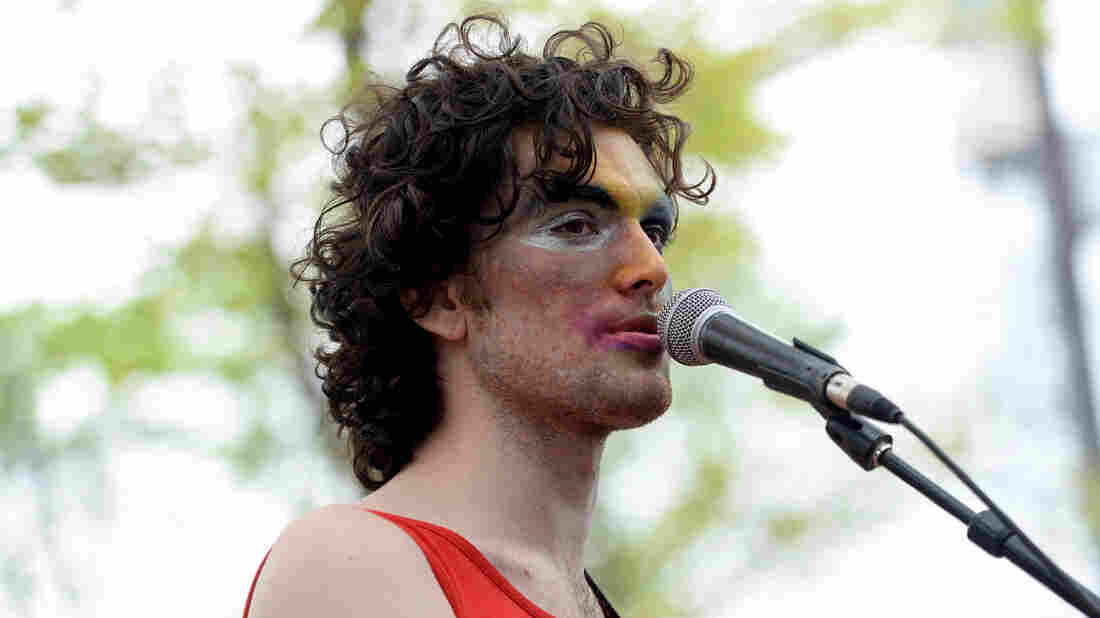 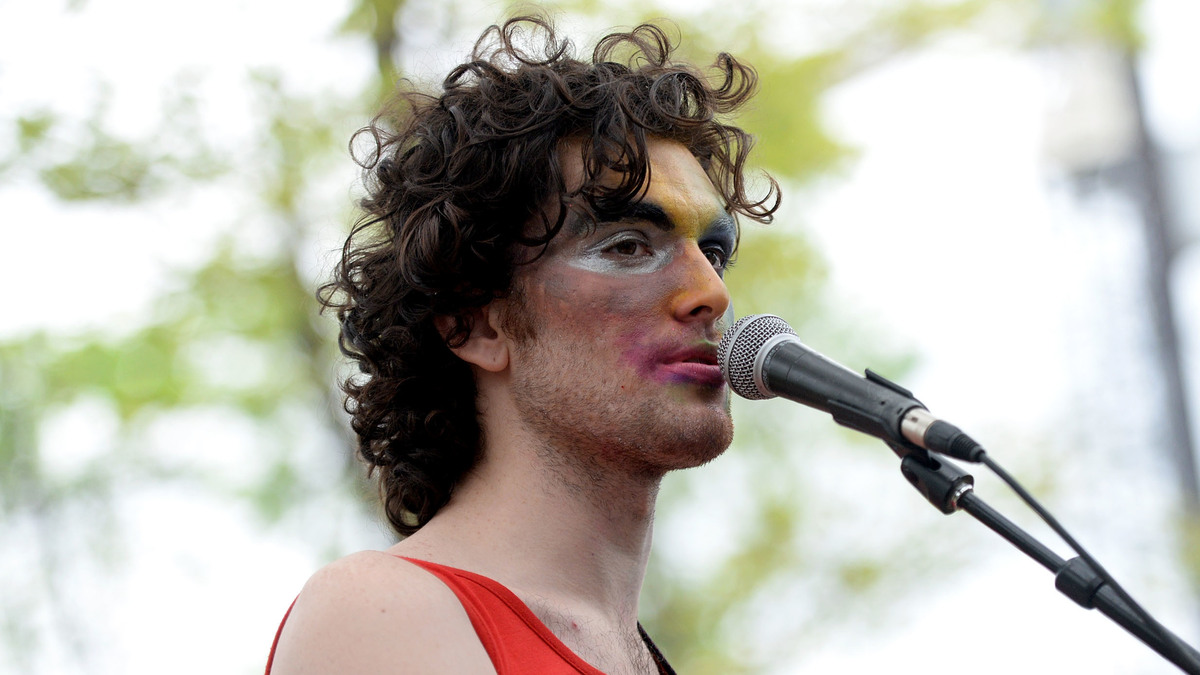 Singer Ben Hopkins of the band PWR BTTM performs onstage during the Pitchfork SXSW Day Party at the French Legation Museum on March 16, in Austin, Texas.

Before last week, the Brooklyn-based punk band PWR BTTM was widely regarded as a promising, emerging rock act. Its two members, Ben Hopkins and Liv Bruce, both of whom identify as gender non-binary, had made a name with catchy songs that, in part, celebrate those identities, bolstered by actions such as requesting gender-neutral bathrooms be provided by venues where the band was booked to play. Last Wednesday, May 10, accusations of sexual assault against Hopkins began to circulate on social media. On Thursday, the band posted a response that read, in part, "These allegations are shocking to us and we take them very seriously." (You can read the complete statement from the band below.) By Friday, the same day the band released its second album, Pageant, the focus had shifted and the band has since been enveloped in the resulting controversy.

(PWR BTTM's publicist did not respond to repeated requests for comment and clarification around the situation. Hopkins directed NPR to the band's publicist.)

On May 12, PWR BTTM's album release show at Rough Trade Records in Brooklyn had been canceled. Salty Artist Management announced it had cut ties with the band (reached for comment, managing partner Jessi Frick referred to the company's statement). The bands T-Rextasy, Tancred, Nnamdi Ogbonnaya, and iji, all of which had been scheduled to open for PWR BTTM's summer tour, each announced they would not play the scheduled dates. The band's label, Polyvinyl, confirmed to NPR that it had stopped selling copies of Pageant and was issuing refunds for the record purchased from them to customers who request one. It also requested the band's music be pulled from streaming services like Spotify and Apple Music and digital storefronts such as iTunes. At least four upcoming shows, including an appearance at the Hopscotch Music Fest, have been canceled (reports of the band's entire tour being canceled remain unconfirmed, and some dates remain listed on the band's website as of this writing). Reaction to the controversy spread so quickly that it took some media by surprise: The New York Times published a lengthy profile of the band in its weekend paper that went to press before the story had spread — the web version of that article added five paragraphs about the allegations and the developing response into the middle of the piece.

NPR Music has covered or partnered with PWR BTTM on several occasions. It premiered Pageant on May 4 as part of its First Listen series; invited the band to play a Tiny Desk Concert in 2016; Hopkins was a judge in the 2017 Tiny Desk Contest; and PWR BTTM performed at NPR Music's 2017 SXSW showcase.

The allegations against Hopkins surfaced after being posted to a private Facebook group called DIY Chicago, posted by a user named Kitty Cordero-Kolin. (Reached over email, Cordero-Kolin confirmed to NPR that they were the author.) In that post, a screenshot of which is below, Cordero-Kolin accuses Hopkins of being a "known sexual predator" and the "perpetrator of multiple assaults." In a subsequent post, Cordero-Kolin writes they were never personally victimized by Hopkins, but "felt comfortable doing something that survivors of [Hopkins'] abuse were rightfully terrified to do." 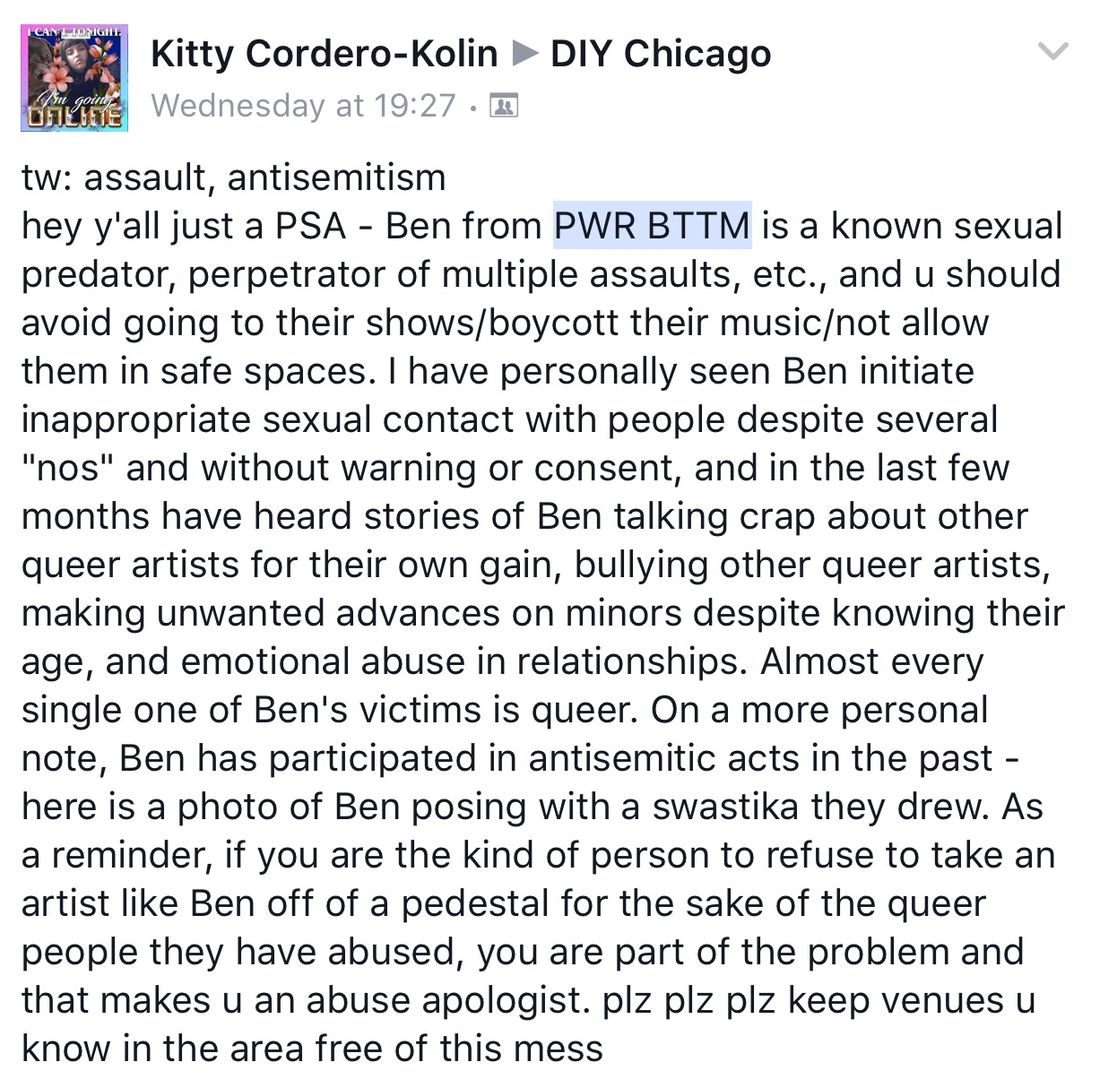 After the screenshots of Cordero-Kolin's messages became public, PWR BTTM issued its statement, which claims that Hopkins had not been contacted by any alleged victims, but that "there are people who have violated others' consent and do not know." The band wrote that it had set up an email address to be overseen by a mediator appointed by the band, in order to "ensure that a survivor of abuse has a voice, that their story should be heard and that people who cross the line should be held accountable."

Sean Black, communications coordinator for the Illinois Coalition Against Sexual Assault (ICASA), tells NPR that "it's very difficult for victims to come forward in these cases" and that ICASA "encourages people to not judge the victims as they come forward."

RAINN, an organization which provides confidential support to survivors of sexual assault, can be reached at its website (where they offer privacy-focused online chat to victims) or by phone at 1-800-656-4673.

Update, May 16, 8:01 a.m.: This story has been updated after a representative for Polyvinyl confirmed to NPR it had requested the PWR BTTM music it controls be pulled from streaming services and digital stores such as iTunes.

Ben and Liv here. We want to respond to some very serious allegations that have been made against Ben. The allegations come as a surprise, but we are trying to address them with openness and accountability. With respect to the image included with these allegations, Ben previously addressed this matter on their/the band's Twitter in January (https://ibb.co/dsNRRQ).

Unfortunately we live in a culture which trivializes and normalizes violations of consent. There are people who have violated others' consent and do not know. Ben has not been contacted by any survivor(s) of abuse. These allegations are shocking to us and we take them very seriously. Further, the alleged behavior is not representative of who Ben is and the manner in which they try to conduct themselves.

To address this matter head on, we have set up an email address through which a survivor or someone working directly with a survivor can discuss the allegations being expressed on social media: pwrbttm.ask@gmail.com We are currently looking for a mediator with the necessary qualifications. This will be the only person with access to the account. Ben does not have access to the account, for two reasons: 1) because we acknowledge that certain individuals will not feel comfortable establishing a direct communication link between themselves and Ben, and 2) to protect Ben in the event that a malicious party attempts to use the address for anything but its intended purpose.

Our primary goal here is to ensure that a survivor of abuse has a voice, that their story should be heard and that people who cross the line should be held accountable. What this means for the band, our album, our fans and our upcoming tours is, as of yet, unclear. Music is everything to us, but we feel strongly that this matter needs to be addressed first. Updates forthcoming.