Accessibility links
David Lewiston, A World-Spanning 'Musical Tourist' Who Brought Old Sounds To New Ears : The Record David Lewiston, the "musical tourist" who recorded what caught his ear from Bali to Peru and made more than two dozen albums for the Nonesuch Explorer label, died on May 29 at age 88. 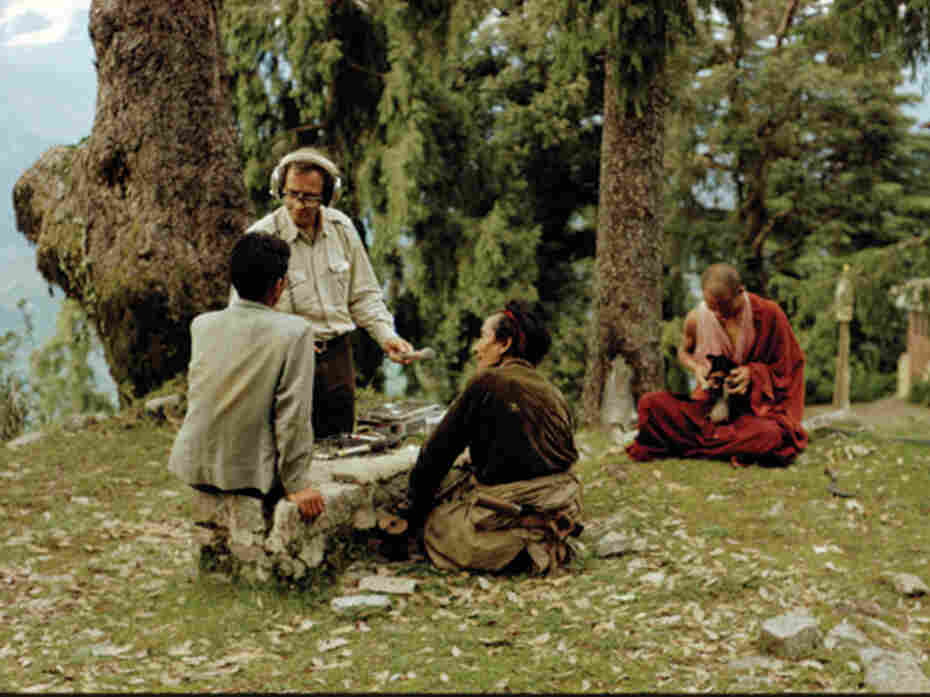 David Lewiston, making one of his field recordings in an undated photo. Courtesy of Nonesuch Records hide caption 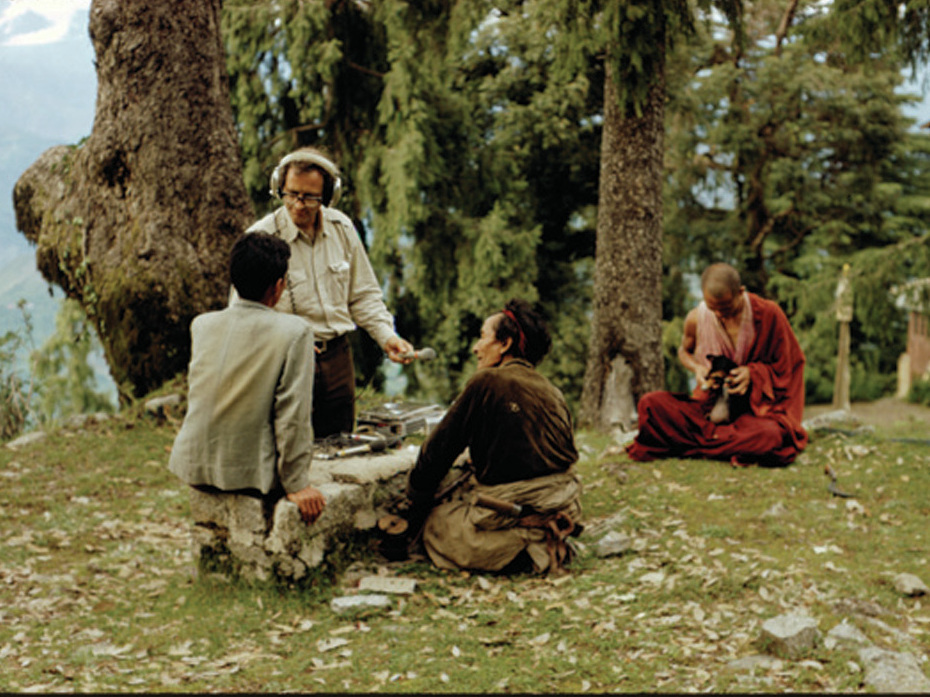 David Lewiston, making one of his field recordings in an undated photo.

David Lewiston, a seminal producer of music from around the world has died. The force behind more than two dozen recordings for the Nonesuch Explorer series, Lewiston died May 29 in Wailuku, Hawaii, at age 88, from what the Nonesuch label has described as an "extended illness"; his longtime friend and colleague, Brian Cullman, told the New York Times that his death resulted from "complications of a series of strokes."

Cullman wrote about Lewiston's treks in a remembrance for Nonesuch:

"Sometimes by bus; sometimes by jeep or truck or caravanserai; sometimes by donkey, though not if he could help it; and almost always on foot, it always came to that, by foot across rickety bridges and footpaths, up the sides of mountains, through valleys and hills rife with goats and wayward sheep, over rocks and fences, across streams and rivers swollen by rain or dry from drought, carrying a small—but not that small—portable tape recorder; twenty or thirty reels of 1/4" tape; a couple of microphones; cables; a week's supply of batteries; a few packs of Fortnum & Mason tea, and a few spare shirts."

Born in London in 1929, Lewiston studied composition at Trinity College of Music, and went on to study with the Russian composer Thomas de Hartmann — who was in turn a student of composer, mystic and author George Ivanovich Gurdjieff. De Hartmann got Lewiston interested in the music of Central Asia — and an obsession was born. Lewiston's first music-collecting trip was in 1966, when he visited the islands of Java and Bali; recordings from that voyage became the iconic album Music From The Morning Of The World: Gamelan And Ketjak. As Lewiston later noted, he was very much a neophyte producer at that time, chalking up early shortcomings to ineptitude rather than intentional omission: "Since I was inexperienced," he wrote in 2002, "I failed to list the musical groups when this album was first released."

Music From The Morning Of The World became the first of 28 albums which Lewiston produced for the Nonesuch label's Explorer series, working with the imprint's famed director, Teresa ("Tracey") Sterne. Their albums were not meant as records for specific ethnic audiences (which labels like Columbia and RCA had already been churning out since well before World War II), or for academics; rather, they were squarely aimed at a general audience with adventurous musical tastes. In an often-repeated anecdote that Lewiston attributed to Sterne, late at night on New York radio station WBAI, the DJ would say "OK, light that joint, here it comes!" and then play the second side of Golden Rain, a 1969 Lewiston album of Balinese music.

Over the ensuing decades, Lewiston's ear took him all over the globe, capturing a scope of music that may seem unimaginably broad today. He made recordings across Asia including in Iran, Georgia, Tibet, Korea, China, Indonesia, India, Pakistan and Japan; throughout Central and South America in Mexico, Guatemala, Peru, Colombia, Ecuador, Bolivia, Chile, Uruguay, Paraguay, Argentina and Brazil; and in Morocco.

Lewiston was always quick to separate what he did from the work of traditional ethnomusicologists, as he told writer Christina Roden in an interview for the world music magazine RootsWorld in 2000. "I prefer to be described as a 'musical tourist,' if a description is absolutely necessary," he said.

It's not that Lewiston objected to the label of "ethnomusicologist" due to concerns about bias or colonialistic thinking. Rather, as he told Roden,

"Tracey [Sterne] and I thought that most ethnomusicologists were pretty dim. We called them 'ethnoids.' I think of an ethnomusicologist as someone who takes wonderful music and analyzes it until all the joy has been lost. It's as though a rather boring person who wanted to be paid for talking about music invented a teutonic-sounding, pseudo-academic title as a scam - and got away with it! Much better to just shut up and enjoy the music. I have a really hard time when I'm writing liner notes, because I feel that if a person is reading them, he isn't enjoying the music."

As a white visitor to these cultures, Lewiston certainly prioritized what he, and he alone, judged as the "authentic" music of a given place, rather than what the musicians themselves might want to share with foreign audiences. As he told Roden in 2000,"When I go to the Himalayas, which is an annual jaunt for me, I have to be very careful to remind the musicians: 'Please! No film music from Bombay!'"

At the same time, Lewiston documented important traditions — and sketched out crosscurrents that might otherwise have been missed, or at least undervalued. As writer Chris Nickson has pointed out in a review of Lewiston's South America: Black Music In Praise Of Oxala And Other Gods:

"The whole concept of strong African culture remaining among the descendants of slaves has become common currency these days, but in 1968 no one had done research into the phenomenon, making this quite groundbreaking in the way it connected the dots between continents. The scholarly work might have gone beyond this, but the music remains as vital as ever, as does its importance."

For those interested in music whose wellspring lay somewhere besides Europe, Lewiston's work was — and remains — an aural primer. In 2006, composer Osvaldo Golijov poetically wrote:

"David Lewiston's recordings are among the great testimonies in sound of our time. Anyone who hears them will be struck by the mysterious yearnings, the transcendental manifestations of joy, and the fragility and impermanence that unite wildly diverse cultures in our planet: ultimately, they give us a sense of how much and how little we humans are as a species. These records continue to inspire me as much as those by Stravinsky, Miles Davis and any of the other masters of the past century. They are a treasure: life as it is truly lived and dreamed."

One of the most mesmerizing and mysteriously beautiful recordings Lewiston made in Chiapas, Mexico, became a sample in Golijov's own music: his 2002 piece K'In Sventa Ch'Ul Me'Tik Kwadalupe [Festival For The Holy Mother of Guadalupe].

After Sterne was fired from Nonesuch in 1979, the label's interest in the Explorer series dried up, and Lewiston went on to produce recordings for the Ellipsis Arts, Shanachie and Bridge labels, as well working with the BBC Sound Archives.

In the last three-plus decades of his life, Lewiston became more devoted to focusing his efforts on conserving the music and ritual traditions of Tibetan Buddhism, particularly among the communities living in exile in India. (Brian Cullman told the New York Times that Lewiston's archive contains almost 400 hours of recorded material, with much of it dedicated to Tibetan music, and that he is currently working with the label Dust-to-Digital to make a boxed set available.)

Despite that devotion to Tibetan music, Lewiston also made return trips to Bali in 1987 and 1994, spending a total of eight months collecting more music; in the late 1990s, he also went to Morocco to record music of the Sufi Muslim brotherhoods in the city of Fes, and to the Caucasus to record the region's polyphonic singing traditions. As ever, Lewiston just couldn't be tied down to a particular place.