Accessibility links
Journey Force : The Record In an excerpt from his forthcoming book Equipment For Living, poet and critic Michael Robbins explains his enduring, totally not-shameful love of the ultimate schlock-pop-rock band Journey. 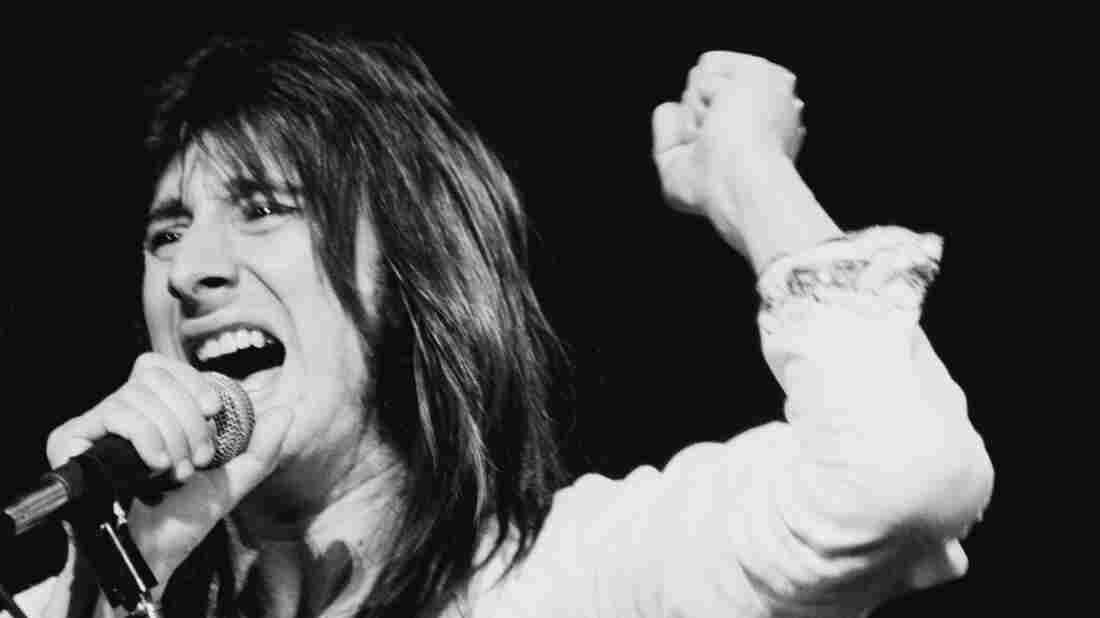 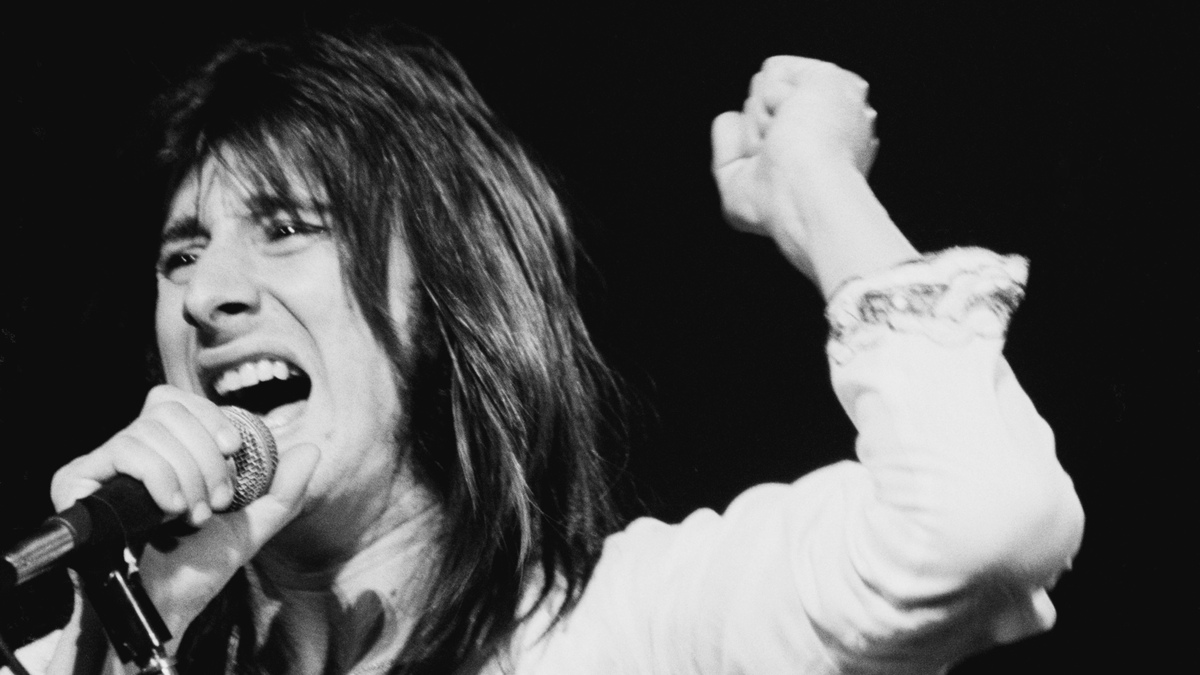 The below is an excerpt from Michael Robbins' upcoming book Equipment For Living: On Poetry and Pop Music, in which the poet and critic peels back the freight of these two mediums to explore what they can, in the tradition of food and chainmail, provide us with and guard us from. Writing to NPR, Robbins explains that his book, from which this excerpt comes, "arose out of a sense that art convicts the world of being only what it is. My childhood Journey fandom was one of my earliest experiences of that, although of course I wouldn't have put it that way then.

"When I came home from school, usually after enduring various humiliations and slights, I'd put on my Walkman and let Steve Perry emote it all away. Every geeky kid has some such talisman — mine just happened to be an arena-rock band that everyone else I knew thought was a joke."

Amid camera trickery at least as advanced as Louis Lumiere's in Demolition d'un mur, Steve Perry is emoting backward through stacks of shipping pallets. It's the video for Journey's 1983 hit "Separate Ways (Worlds Apart)." He lip-synchs over arena-synth bombast: "Promises we made were in vain — in VAY-ay-ay-een, VAY-een!" At about the 2:21 mark, he glances behind him to make sure he's not about to smack into something. Journey was a band too heedlessly excited about its dumbest ideas to prefer choreography to contusions.

From the fifth through seventh grades, I was a card-carrying member of Journey Force, the band's official fan club (they issued you a card; I carried it). Every month I devoured the official Journey Force newsletter, Journey Force, which ran hard-hitting interviews with band members:

Journey Force: Congratulations on your Grammy nominations! How does it feel to be nominated?

Steve Perry: God, it's amazing! I'm so excited. I was nominated for my participation in "We Are the World" and I'm in there for a single ("If Only for the Moment, Girl"), and possibly for the album of the year. I think there's also a category for "Best Performance By a Group or Duo."

Journey Force: That must be really exciting. Are you going to the ceremonies?

Steve Perry: Yes! I've got my tuxedo coming in, with tails and everything. Speaking of tails, we're discussing selling a T-shirt at the Journey concerts that has tails ... it's black and a T-shirt, but it has tails. We were talking about that at the meeting today.

Now that's what I call a meeting.

I had several Journey T-shirts, without tails, as well as Journey headbands and Journey wristbands (it was the '80s). Journey pins adorned my jacket — one depicting the cover of the album Escape (a scarab spaceship exploding from its chrysalis planet), one the disconcerting blue robot head (or whatever it is) from the cover of Frontiers. I tracked down all the albums on cassette, even the pre-Perry waste products — Journey, Look into the Future, and Next — and guitarist Neal Schon's solo emetic with Sammy Hagar. I had the Journey Escape video game for the Atari 2600, a cynical product of rock corporatism apparently designed to kill Lester Bangs. (After "a spectacular performance," you have to lead the band members to the scarab spaceship thing while protecting the concert cash from "hordes of Love-Crazed Groupies, Sneaky Photographers, and Shifty-Eyed Promoters," as the game manual puts it. There was an arcade game, too, but I never played it or even saw it in an arcade — in this version, fans steal the band's instruments and hide them on various planets. "It's such a pleasurable experience to meet [our fans]," Perry told Journey Force in 1984.)

Do you see Louis Lumiere in here?

All this meant I had negative cultural capital in middle school. Girls liked Journey. Guys, committed to the masculinist overdrive of football and pushing nerds into lockers, listened to Iron Maiden and Ozzy. Being mocked for liking the wrong bands was part of the natural noise of my childhood, so normal I didn't question it. Anyway, I bonded with metal girls over Journey (Nikki Wright, get at me).

I must've known at some level that Journey wasn't considered "good" — was, in fact, considered a joke. But I wasn't aware that such a thing as music criticism existed, so I hadn't heard of Robert Christgau, whose D+ review of Frontiers would have infuriated me: "Just a reminder, for all who believe the jig is really up this time, of how much worse things might be: this top ten album could be outselling Pyromania, or Flashdance, or even Thriller." Possessing a nervous system, Christgau loved Thriller, but the other two mentions were digs: Even this crap is better than Journey. (At the time, I owned all four albums, and I still say Def Leppard's Pyromania is a goddamn masterpiece.)

It was only much later that I began to care what smart writers thought about music I loved — or that I had foolishly believed I loved, but I couldn't have loved what Greil Marcus called "the self-evident phoniness in Steve Perry's voice — the oleaginous self-regard, the gooey smear of words, the horrible enunciation," right? If l loved all that, then I must have bad taste.

Eventually, of course, I did succumb to right thinking. My family moved to Colorado Springs, where I fell in with skateboarders, who turned me on to Black Flag, Minor Threat, Big Black, the Minutemen. From there it was but a short step to the usual constructed ideas of good taste in music. My first thought was to list a bunch of artists here to prove my credentials, which just shows how deeply these identitarian impulses run. For years, my younger sister would, to embarrass me, bring up my preadolescent fandom. I pretended my infatuation with Journey had been an elaborate, ironic gag, which drove her crazy.

So let me make it up to her by affirming now, without irony: I like Journey. Or, at least, I like two Journey songs (not count­ing Steve Perry's magnificent solo hits "Oh Sherrie" and "Foolish Heart"). I first heard "Only the Young," Journey's second-best song, in 1985, when I bought the matchless Vision Quest soundtrack on cassette at a Sears in Colorado Springs. Later I would learn the band left it off Frontiers in favor of two forgettable tracks. Of course. The song roars to life with Schon's pick slide, and Perry's off in the ether, belting needlework-sampler wisdom poetry. "Only the young can say," because the young see through "promises" and "lies." The synths and processed guitars swell like a mammoth wheel of Monterey Jack left in the sun.

I'm supposed to be repelled by this, but I find it thrilling. The intervening years of tasteful discrimination haven't blunted its power. "Only the Young" distills Journey's message, insofar as the band was coherent enough to have one: the kids are all right, they just wanna be free. It's there in "Escape," amid hair-metal riffs avant la leather — a kid's "breakin' all the rules" and "gettin' out from this masquerade." It's there in the titles of the group's best-known records: Departure, Escape, Frontiers. It's a perfectly generic message, expressed without humor or poetry, but it becomes something more in Journey's one great song, full stop.

You can't listen to "Don't Stop Believin"' now without thinking of Tony Soprano, who punches it on the jukebox before the screen goes dark in the most overanalyzed scene in television history. It's an inspired choice — a synecdoche for Tony's lack of sophistication, his humanity. If Scorsese had filmed it, Tony would've played "Gimme Shelter" or something. But instead, here's this very bad guy whom you care about because you've been immersed in his life for six seasons — "the most fully drawn person in modern fiction," David Thomson called him — and you're never going to see him again, and the poignancy and strangeness of that are wrapped up in a hackneyed corporate-schlock anthem.

At least that's what you're supposed to think "Don't Stop Believin"' is. Punk and its aftermath made high school bearable for me, but it also wiped some of the best bands of the '70s and '80s and their songs off the board for self-consciously cool kids. I sometimes dream of a world where my generation worshiped Van Halen instead of the Pixies. Journey wasn't one of those bands, but "Don't Stop Believin'" is one of those songs. It cascades from whoosh to whoosh — it's peaks all the way down, closer to a twenty-first-century pop hit like Amerie's "1 Thing" than to similar-souled stadium ballads like Styx's "Come Sail Away." Like its "small town girl" and "city boy from South Detroit" — a section of Detroit that exists only in the mind of Steve Perry ("the syntax just sounded right," he said) — the song might go anywhere, do anything, as long as it's somewhere bigger, something gaudier. As Chris Willman wrote for the Los Angeles Times music blog:

Structurally, it's a mess: Surely one would get tossed out of songwriting school for a tune that follows its opening piano riff with a verse, a guitar arpeggio, a second verse, a bridge, a guitar solo, a third verse, a repeat of the bridge, another guitar solo ... and then, 3 minutes, 20 seconds in, when the song is ready to fade out, one of the most unforgettable choruses in rock.

And finally, the greatest of songs.

Maybe I wouldn't hear so much in the song now if I hadn't lip-synched it into my air-mike so much then. I remember waiting impatiently for the band to play "Don't Stop Believin"' the one time I saw them live, at Denver's McNichols Sports Arena in 1986. My dad, reluctant chaperone, was more interested in their opening act, The Outfield, who'd ridden the bad vibes of "Your Love" onto an NPR program he'd heard. His interest didn't survive their first song. I asked him recently if he remembered anything specific about the concert, and he said, "I remember specifically that I was bored."

Journey did play the song, of course, and I was big with wonder. In a few years I'd be standing with friends in much smaller and grimier venues, watching bands like the Butthole Surfers, The Replacements, Warlock Pinchers, and Sonic Youth, and Journey would be an embarrassment. In 2000, they paved McNichols Sports Arena and put up a parking lot. But as I listen to "Don't Stop Believin'" today, once again, in the arena of my soul, how high that highest Bic lights the dark.

Michael Robbins's Equipment for Living: On Poetry and Pop Music will be published by Simon & Schuster on July 18.