Accessibility links
Joe Scarborough Still Wants To Make 'Trump: The Musical' : The Record The Morning Joe host plans to release new music every month over the next two years.

But in the meantime, the 'Morning Joe' host aims to release a new mini-album every month this year. 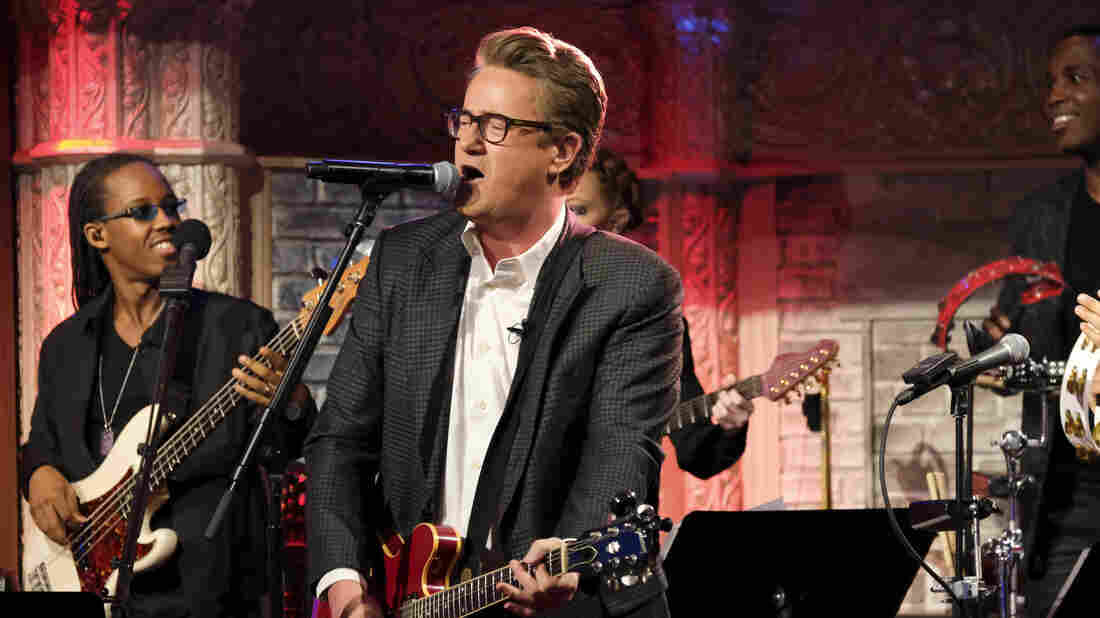 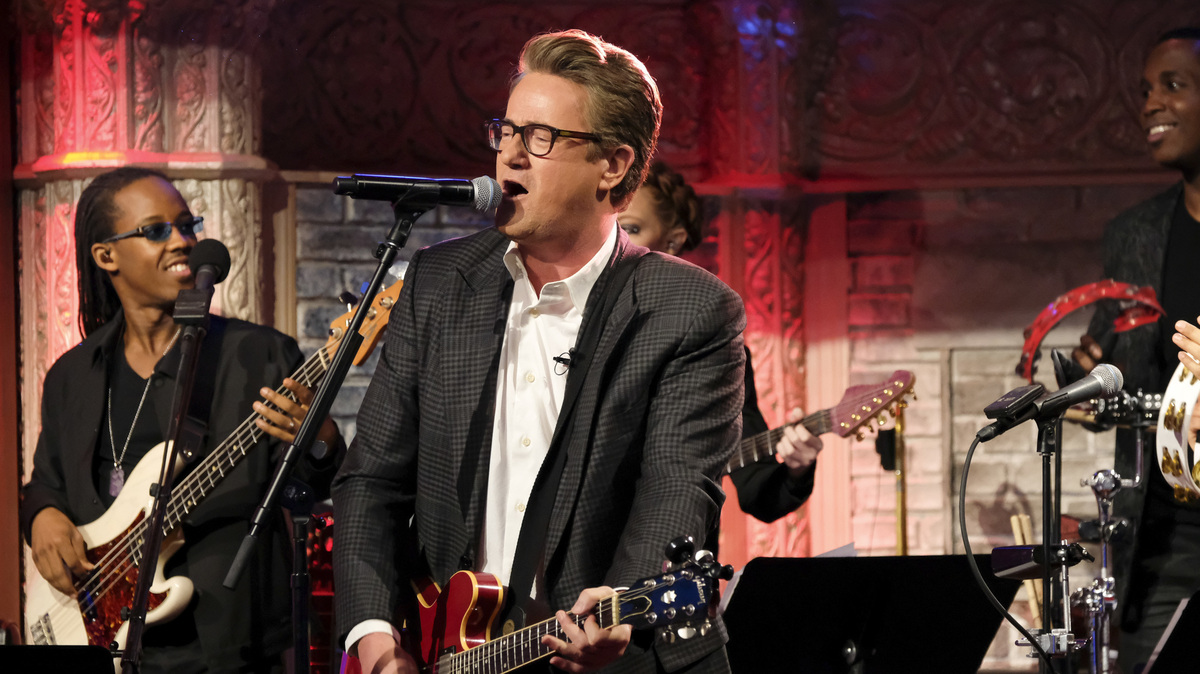 It's the Thursday before the Fourth of July and Joe Scarborough, the MSNBC personality, is having a surreal morning. A little more than 90 minutes ago, the President of the United States took to Twitter to hurl a volley of insults at the Morning Joe host (whom he's nicknamed "Psycho Joe") and, far more crudely, co-host and fiancée Mika Brzezinski. President Trump, who'd been friendly with Scarborough for years until their relationship turned sour during the 2016 presidential campaign, has attacked the couple before, but this time, the president's comments were so objectively coarse that congressional leaders from both sides quickly denounced his words.

Scarborough is on the line to discuss his musical side-project, a five-song EP called Mystified that hit streaming services last Friday. The former Florida congressman turned talk-show host, who started playing in bands when he was 14, estimates writing around 400 songs over the past four daces. Finally, a year or two ago, he went into the studio to record 10 of them and came out with 50. "It's what I love doing more than anything," he says. "It drives me."

Last summer in a GQ profile, you were in the early stages of writing and pitching something called Trump: The Musical. At the time, you'd said that his win would be "even better" for the project's viability than if he lost. But now that he did ... well?

Joe Scarborough: When I said that, I, of course, didn't think he was going to win. Nobody really thought he was going to win. Trump: The Musical was going to be historical fiction. I wrote the songs in the middle of the campaign, in the summer [of 2016], and people would always stop when we were recording and say, 'What if he wins?' I'd go, 'It's not gonna happen.' Then after he won, I'm like, 'What are we gonna do?' But then suddenly ... the problem is just the opposite — I could write a song every day about another crazy thing. But it's moving forward. [My agent] Ari Emanuel and I are working on it. It may be a multi-platform deal where it's not just a musical, but a reality TV show about a musical — American Idol meets A Chorus Line, where you have people trying out to play the president and members of the Trump family.

It's very meta. We have a feeling everybody's gonna want to be a part of it.

You know him. Does he have taste in music?

No. In a decade of knowing him, I've never heard him talk about music one time. I think he mentioned Elton John once in an Anderson Cooper interview, but that's about as deep as it's gone.

Hear The Theme To 'Air Force One'

Yeah, a fictional Air Force One and a fictional president who gets kidnapped aboard his own airplane. He's playing a role. We've always said ... he wasn't playing himself as a politician, he was [playing] a reality-TV-star politician. When he tries to surround himself with the trappings of the presidency — or decide what songs he's going to play — so much of it has to do with what he thinks a president should look like on TV or in the movies. It is not surprising that he plays the soundtrack to Air Force One — he doesn't read, he doesn't understand history, he doesn't understand politics, but he understands pop culture. And it seeps through everything he does.

Right now, we're at a critical political moment. What role does music play?

I think it's more critical than ever. The mistake a lot of us have made, in reaction to Trumpism, is nonstop outrage and shock. The much better way to get at him is by laughing at the insanity of it all. Mocking him. And you're allowed to do that with more of a 30,000-foot glance if you are a movie director or a poet or a novelist or a songwriter — you have more distance than hosts on CNN or MSNBC or editorial networks that're just responding, that day, to the insanity.

Mystified is your first EP, but you've made music your whole life. Why are you doing this now?

It's the worst rock-star story ever, the least glamorous reason to get into a rock and roll band — or to start releasing your songs: I turned 50. And I was like, 'Oh my God, this has been the center of my life, for my entire life, and my kids don't even know about this side of me.' People have known me as a lawyer, a football coach, a politician, a TV host. But they've never seen what was actually at my core, what I value most outside of my family. So the idea was, I was going to record 10 songs. I've always been sort of a studio rat. And it went so well, at the end of a year, we had recorded 50.

Now you're planning to release EPs monthly. What's the strategy to that schedule?

Everybody's got a band: 'I'm a tennis player, but I want to be in a band'; 'I'm an actor, I've got a band.' I'm the reverse. I've been playing music since I was 5. Anything I've done, I've done to support my music habit. So, for the first month, everybody will say, 'Gee, isn't it cute?' Then the next month, I put four more songs out. And if I don't get absolutely horrific reviews, four more. After one year, I will have put out 50 songs. I'm confident that at the end of a year, people will say, 'He doesn't completely suck. There are actually some good songs in there.' For me, that's really important. The downside is, if the [songs] don't keep improving every month, people could tune it out.

You run the risk of fatigue, but you're hoping once the novelty of "Joe Scarborough has a band" wears off, people will hear the music more objectively.

Right. It's a lot like Morning Joe: We got some early reviews that were grudgingly respectful; nobody could admit that they liked the show in polite society. And our favorite review — which we still use whenever we're introduced anywhere — was when the New Yorker called our show "appallingly entertaining." That was their way of saying they liked it, but still being snide about liking it. Some of the reviews about Mystified are like that.

Yes, they're like, "not awful," "surprising," and "better than expected."

It's absolutely hilarious. After a couple of reviews, I called my bandmates and said, 'You don't understand, but I've been through this with Morning Joe. Those are the best reviews we could ever ask for.' One I loved said it was like "Walk on the Wild Side" [being sung by] a light-blue gingham shirt. I don't care what else you put on me: If you compare me to Lou Reed, I'm good.

What's your fantasy Scarborough concert look like? Let's say you can play with any artists — living or dead, from any era of their careers — and the show can take place anywhere. Who's on the bill and where is the show?

I really love British music, so the show would be in 1977, during the Queen's Silver Jubilee, the night The Sex Pistols went down the river blaring "God Save the Queen." I would talk to The Beatles, all solo, and somehow figure out how to do what Lorne Michaels couldn't do [and get them to reunite] and maybe offer them $500 apiece to sit on the river as The Sex Pistols go blaring down it. Also, I would talk to young Elvis Costello and The Clash, who are about a year away from their big breakthroughs, and have them there.

Are you headlining or opening?

I would be too intimidated to play. Instead, we'd have a roundtable. We'd interview them Morning Joe-style.